A look at the wife who’s campaigning for the U.S. President — Rosalynn Carter 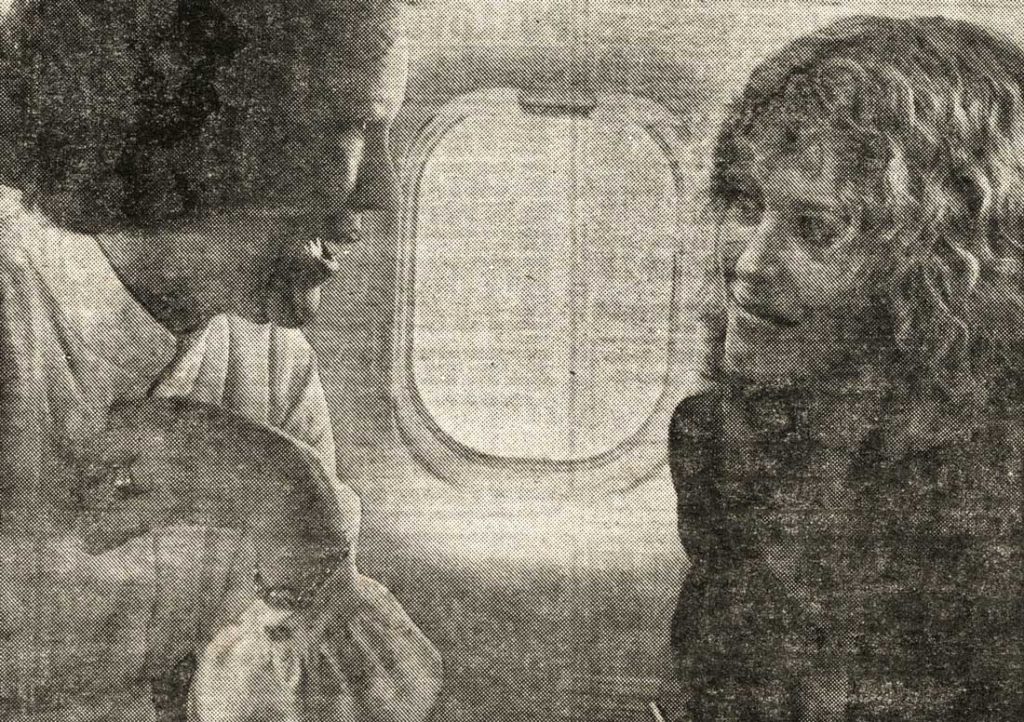 Rosalynn Carter looks like the woman next door and she sounds like a character in Gone With The Wind. But she acts like a missionary, and in this role she is in a class of her own. The gospel according to Mrs Carter is a potent piece of preaching on behalf of her husband’s re-election as President.

She Is America’s First Lady and Jimmy Carter’s last hope as she campaigns tirelessly for him. I joined her on a three-day whirlwind tour across the States, from Washington to California and back in her personal jet – Air Force Two. The people may have their doubts about Jimmy Carter, but Rosalynn has none.

She is a believer, and it is her aim to convert the vast congregation to the one true faith. In her view the only man who can lead America is her husband, Jimmy. At the mention of his name her eyes, shine and her soft southern voice trembles with emotion.

“Jimmy and Ah take turns in reading the Bible to each other every night. We take our problems to Jesus and we say, ‘heah Jesus take care of mah problems.’ Jesus knows that we are trying to do our best.”

It is hard to believe that this pretty woman who sounds as though she should be selling Bibles instead of the Presidency is called by enemies The Iron Magnolia and The Most Powerful Woman in The World. She giggles shyly at the mention of power and the role she plays in the White House.

“Ah’ve never known what it’s like not to work. Jimmy and Ah, we’ve always shared our life. We’ve always been partners, so it seems logical for me to share his political life. Back home in Plains, Georgia Ah was the who paid the phone bill, who looked after the washing machine and fixed anything that went wrong in the home.

“Ah never went moanin’ to Jimmy with mah problems when he came home from work. Then Ah started to look after the books for  our peanut business. Jimmy taught me to do that. He taught me to do everything. He told me Ah could do things Ah never dreamt Ah could do.”

Rosalynn Smith’s dream began when she married Jimmy Carter in 1946. He was a U.S. Naval Academy graduate and she had just left college to start work in a beauty salon. For the next seven years Jimmy served in the Navy and Rosalynn travelled with him, bringing up their three sons – Jack, Chip and Jeff. When Jimmy’s father died in 1953 they both returned to Plains to manage the family’s peanut ware-house.

The move home did not please Rosalynn. Being a naval officer’s wife was glamorous compared to the small-town dreariness of Plains. But Jimmy and Rosalynn had a dream… a dream that hard work and God’s help would one day take them from Plains and peanuts to their destiny – the Presidency.

Rosalynn is not nostalgic for small town days. With her hands clasped on top of her pale blue, mock suede skirt, she laughs: “Ah said to Jimmy recently that at the end of the next four years, Ah’ll be glad to glad to get back to Georgia for a rest.

“D’you know what he said? ‘After two weeks you’ll be so bored you won’t know what to do’. And he’s right. Ah just love politics and mah life at the White House.  People say that Ah tell Jimmy what to do, but that’s not true.  Usually we never have enough time to discuss everything Ah want to know. So now we have lunch once a week to go over the various issues.”

Rosalynn’s programme also extends to sitting in on cabinet meetings and travelling as her husband’s emissary to visit foreign heads of State. Unknown privileges for previous First Ladies. So how does she get away with it?

Once again, the gentle hands clasp and unclasp and she makes you feel a brute for having asked such a question. “The point about being First Lady is that you can use the position to do what you want to do. If you are the hostess type who likes to arrange flowers, that’s fine.

“But Ah’m not, so Ah do what Ah think Ah can. Ah’d still be criticised If Ah stayed in the White House pouring tea all day. Jimmy likes me talking to him and helping him. If Ah ask him anything he tells me. Well almost. When Ah pester him sometimes, and if it’s secret, he just says, ‘Shut up because Ah’m not tellin you.’

“And we have our arguments. Like when Ah tell him I don’t like what he’s doing and he just goes right on doing it. We’re just like any other husband and wife except we’re doing more exciting things. If you came up to the second floor of the White House you’d see that it’s just like anybody else’s home.

“It’s not just work, we have our fun too. We take our briefcases with us every weekend when we go to Camp David, but we never open them. We just switch off and relax. And every day at 4.30 Jimmy and Ah break off whatever we are doing play tennis and go jogging. It’s our way of keeping healthy and easing the pressure.” And the pressure incredible.

During the three days I travelled with her she covered thousands of miles, shaking hands preparing speeches, giving press conferences to critical newsmen, addressing crowds, and one night standing in the rain holding a child long enough for a nervous mother to fix her camera and get a picture of them.

She is Jimmy Carter’s greatest asset and the crowds love her. Rosalynn’s greatest asset is her lack of polish and style. When she Is on a platform you can sense her shyness. But she never falters. Instead she takes a deep breath and then slowly and quietly she’ll tell the cynics: “Jimmy just told me a minute ago over the phone that he cares about you and he wishes he could be with you. Mah daughter Amy sends you her love too.”

The crowds seem reassured by her promises and platitudes. When she walks among them in clothes and shoes that most could afford, they jostle, grab her hand and shout: “Say hi to Jimmy for us.”

She, in turn, stands chatting like a neighbour over the garden wall.

There is nothing awe inspiring about her this is an image she fosters carefully. One of her favourite topics is the family grocery bill and how she and Jimmy still go over their housekeeping together. “Ah still pay for the upkeep of our house back in Georgia. So Ah know about prices.”

She may be in touch, but her lifestyle has little in common with the crowds who gather to hear her. Four armed Secret Service men never leave her side. Others are in the crowd – one with a long black case containing a shotgun.

Her personal nurse and medical bag travel in the eight-car motorcade that accompanies her limousine. On the plane, her Press secretary and and her personal secretary sit across from her ready to help and advice as she studies speeches and local information in readiness for the next stop.

Two items of her baggage are a touching reminder of the peanuts-to- Presidency leap: her make-up bag is ofthe floral variety, which can be bought in any chain store; her red leather briefcase inscribed with her initials is a present from King Khaled of Saudi Arabia. She shrugs her shoulders dismissively when I mention that she had been criticised for lack of style.

“They can say what they like about mah clothes and mah hair because Ah’ve never been interested in those things. We have too many important things to worry about.”

Apart from Jimmy and politics, Rosalynn’s other favourite subject is her 13-year-old daughter. “People still think of Amy as a little girl, but she’s a teenager now. She’s always going through mah drawers, and Ah never know where mah lipsticks have gone.”

If Rosalynn wasn’t such a delicate Southern lady she might have also added that she and Jimmy are the first in a long line of Presidential couples to share a Presidential bedroom. She does, however talk about Jimmy’s sleeping habits.

“One of the reasons Jimmy is in such good shape is because he doesn’t re-live things at night. He has the ability to go straight to sleep. The only night Ah’ve known him to lose sleep was the night the hostages were taken. And now we’re very hopeful of a release date and we think of them every night in our prayers.”

Soon after our talk it was touchdown time again. The band waiting on the tarmac played Happy Days Are Here Again, the local dignitaries lined up. Rosalynn was freshly made up and a steward helped her on with her jacket.

Before she stepped from the plane she turned to me and said: “Say   hello to the Mirror readers and tell them we’re definitely going win. No doubts about it.” And the woman with no doubts went forth to take her faith to the multitudes. 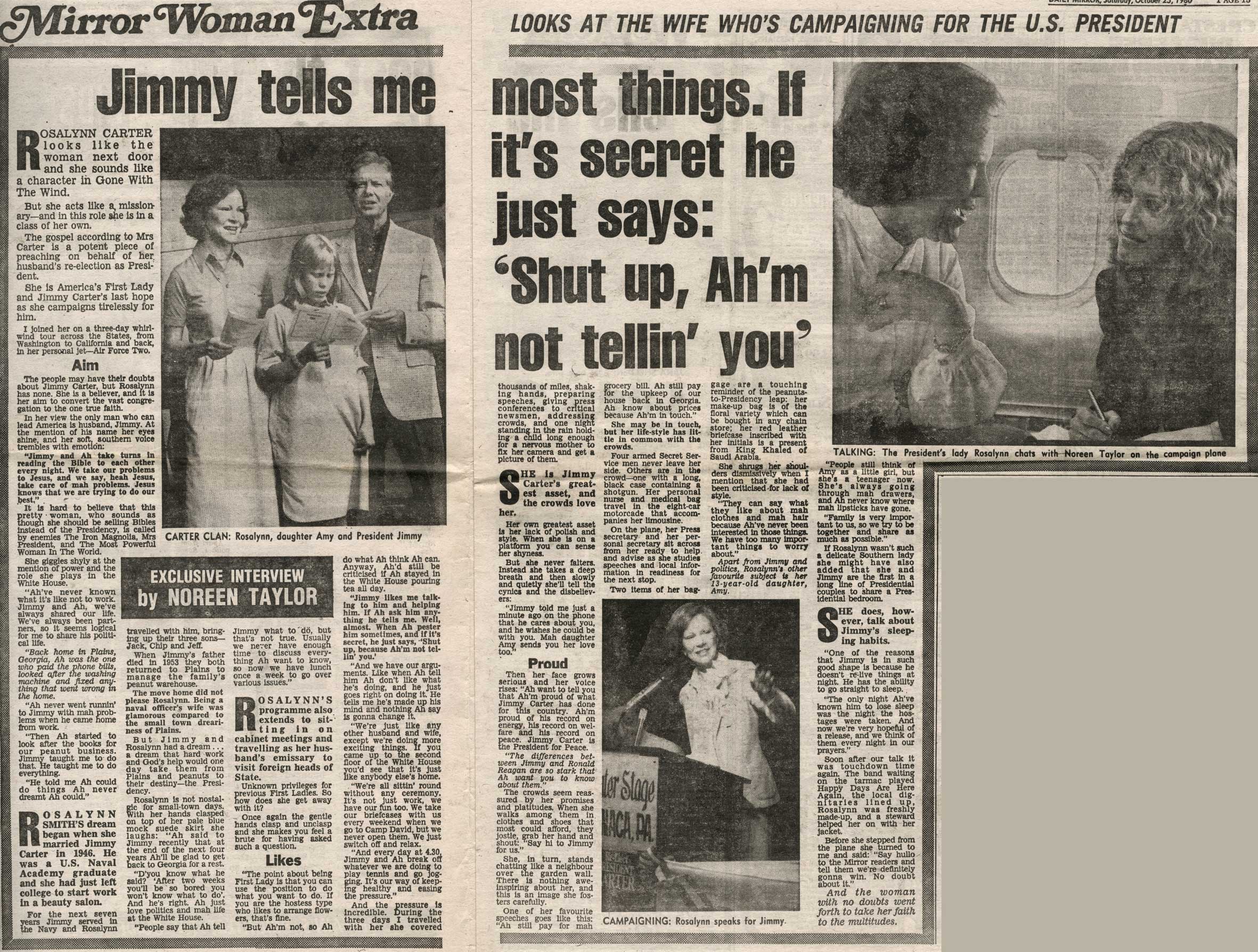