A message of peace from Raisa Gorbachev 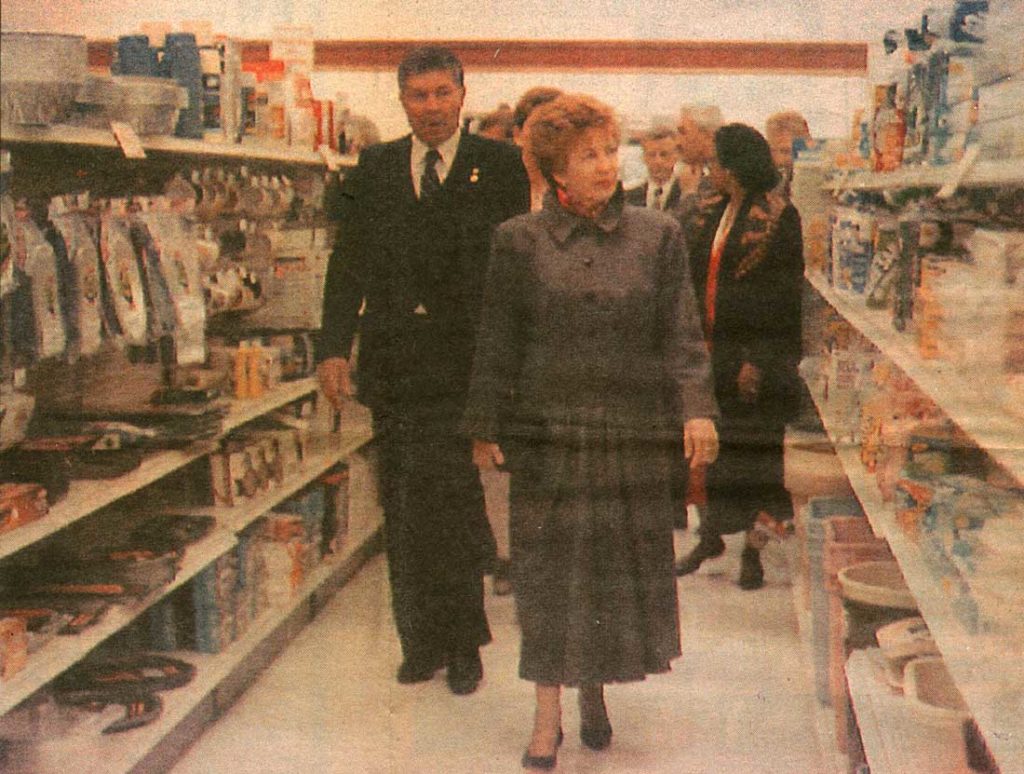 The Daily Mirror’s Noreen Taylor was the ONLY western journalist allowed to join Raisa Gorbachev when she visited Mr and Mrs Average USA in Minnesota. In the face of fierce competition from American newspapers, she beat them to this World Exclusive in their own backyard…

Raisa Gorbachev came to Main Street USA and the plain people of America opened their hearts to her. She sat in a drugstore drinking coffee, she bought packs of bubble-gum, she even walked next door to a Mexican takeaway where she sat talking to two goggle-eyed teenagers.

And all of this was made possible by Governor Rudy Perpich of Minneapolis who had written to the Gorbachevs inviting them to stop off after the Washington summit and visit their town in the Mid- West, in the heartlands of America.

To Rudy and his wife Lola’s everlasting surprise, the Gorbachevs accepted. “Oh, my God, they’re coming up the path,” came the screams from inside the Governor’s house as the Gorbachevs arrived for lunch. And there they were standing in the hallway surrounded by battalions of US and Russian secret servicemen.

Mikhail looked thinner than his photograph, and Raisa, a small dainty figure in a red and blue check suit, walked beside him in a pair of four-inch black stiletto heels. The couple looked tired and drawn.

He seems to be the gregarious partner – his arms gesticulating, his deep laugh punctuating every sentence – while she appears to be the quieter, more intense one. Over lunch, speeches were made, gifts presented. Raisa received a signed received a signed copy of a novel written by her favourite author, Sinclair Lewis, and a bottle of her favourite perfume, Estee Lauder’s White Linen.

She seemed genuinely delighted by these treats. Then after lunch came Raisa’s special treat, one she had specifically asked for. Quite simply, she wished to visit the home of an ordinary family, to sit down with them and talk about their lives and find out how Mr and Mrs Average America actually live.

Karen and Steve Watson were chosen since their 13-year-old daughter Lisa had been to Moscow on a cultural exchange visit this year. The Watson home was pin-neat – as clean as an operating theatre.

Outside, neighbours and their children stood along tree-lined streets in front white clapboard houses waving home-made flags and handkerchiefs decorated with the Gorbachev’s names. Outside the Watsons’ house stood Lisa and her mother Karen.

Lisa, a cool little lady, spoke first: “Welcome to our home Mrs Gorbachev,” she said. “This is my mother, Karen.” Karen had been practising a few words of welcome in Russian and as she shook the hand of the Russian first lady they came out in a nervous torrent.

The Watsons’ home fascinated Raisa. “How much did it cost?” was her first question. “Eighty thousand dollars (£48,000) answered Steve, a teacher. How many rooms? Four bedrooms?

“Does all of this house belong to one family,” asked Raisa with widening eyes. “And what do all these machines in the kitchen mean?” Raisa stood in front of the washing machine, dish-washer and spin-dryer. Did they work? Did every family live like this?

The questions tumbled out so fast the interpreter could barely keep

She was fascinated, enthralled. How did they afford the house? Did Karen really enjoy her job as a part-time nurse or had she been doing it for extra money? “A bit of both,” said Karen.

“Do you have the children’s grandmother look after them when you work,” asked Raisa. “Be frank with me,” she urged. “Well actually I don’t like to ask Steve’s mother,” said Karen awkwardly. “So, Steve and I work it out between us.”

Raisa seemed puzzled. “You know in Russia every working woman has to have a grandmother to look after her children. They have more help from their families.

“It is so hard being a working mother,” she went on. “Although I only had one child, I know what it is like to have to come home and do all the washing, cooking and ironing by yourself. It is not easy for a woman is it?” she asked Karen. “A woman’s work is never finished.”

Then she turned to Lisa and said: “Will you write to me in Moscow? My address is very easy. You just write to The President, Russia.”

More questions followed. How did Karen and Steve divide the house work? When will they pay off the house?

How much did food, clothing, and furniture cost? Karen told her she bought her clothes at garage sales and then went on to explain to garage sales to Raisa who seemed fascinated by the idea of buying second hand clothes.

Raisa asked her questions in a warm but firm manner rather like a concerned social worker. She brought presents for the family. Books on Russian fairy tales for Lisa and a china samovar for Karen and Steve.

After half an hour one of her aides said that Mikhail was on his way to the airport. Could she hurry? She did not. She came out onto the street to shouts of joy and welcome and stood in front of sections of the crowd, held up her hands with pink polished nails and said: “I’m so glad to be with you and I bring greetings from my country. We are friends now, aren’t we?”

The crowd, teenagers, school children, fathers with children on their shoulders, just roared their approval. Karen and Raisa hugged and kissed each other. Karen cried and Raisa’s eyes looked moist. And you could not help but be moved by this extraordinary sight taking place in a down-home, suburban American street.

Two women from countries who were recently threatening to nuke each other to Kingdom Come, standing nuzzling each other’s cheeks while crowds who were also fighting back the tears back looked on.

Raisa’s motorcade eventually reached Minneapolis airport for the final leg of their American visit – San Francisco and breakfast with the Reagans, a major meeting at Stanford University and a private meeting with George Shultz for whom Gorbachev has great affection.

At the airport, Raisa held my hand for a long moment. “I think our people are fed up with the stress of combat,” she said. “When I looked at those Americans, the street so full of warmth, I know they wanted to be friends as much as we do.

“I went to visit a family because I wanted to sit quietly with them and talk to them about their lives. I don’t know about anything in America apart from books and films.”

She added: “I know how pointless the cold war has been. Russians, Americans, Europeans, we are just the same. That’s what Minnesota has taught me.”

She joined her husband on the steps of the plane. Two small  children waving back as a children’s orchestra played Midnight in Moscow on the tarmac below. A Russian KGB man swapped section badges with American security and small-town American will never seem quite so corny again. 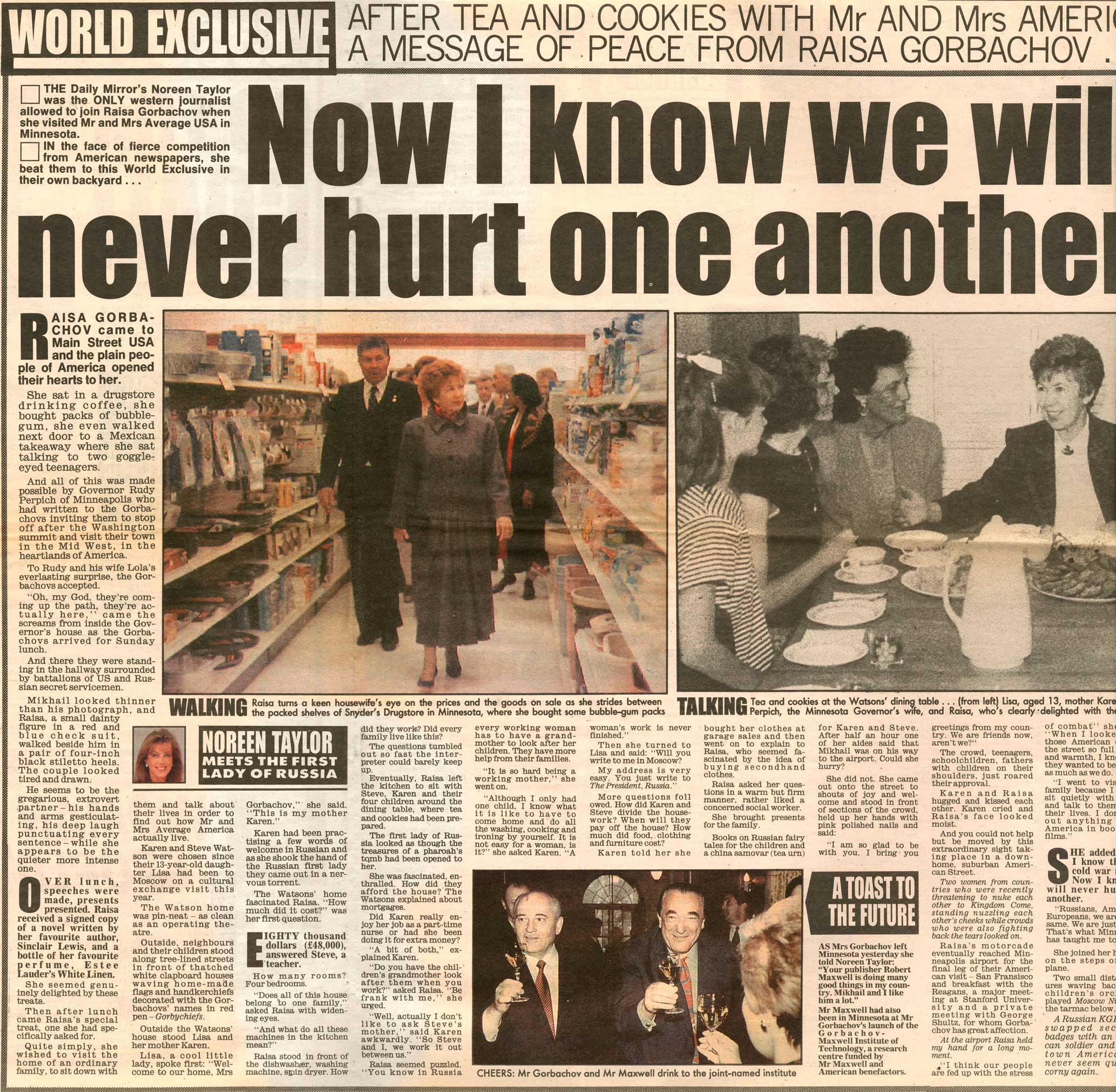