Marica McKay, widow of a paratrooper killed in June 1982 during the Falklands War who was posthumously awarded the Victoria Cross  |  The Daily Mirror  |  October 1982

It is painful for Marica McKay to talk about her dead husband. She prefers to go on about the clothes she has bought for their five-year-old daughter Melanie and the new house they will be moving to shortly.

She will even laugh and joke rather than face up to the subject of Sergeant Ian John McKay VC. Words like grief and love do not enter her vocabulary. Marica seems to feel that she is on safer, less emotional ground if she can repeat over and over again: “No one wants to die.“He knew the risks, but he was doing his job.’ That’s all. He was being a paratrooper, and I know it might be difficult for you to understand – that’s the way it was.”

Those lines seem meaningless without a glimpse of the woman who sits bolt upright in her chair, clenching her teeth so her bottom lip will not tremble and swallowing hard in case the words choke in her throat.

Marica adored him. They met when she was 29 and married to another paratrooper with a nine-year-old son, Donald. Ian was then 23. She says: “We met, and we, knew. Simple as that. We were married for six wonderful years.

“Melanie was his joy. You’d have thought he was the first man to have a daughter. He wasn’t the sort to mind being seen pushing a pram either. We could talk about anything. We were the sort of people who went out to dinner and never noticed anyone else in the restaurant.

“I used to miss him most late at night and in the early mornings. Now I’m beginning to realise that I’ve also lost my greatest friend.”

I asked Marica if she knew the wife of Colonel H Jones, the other VC. “I just want to say this: all paratroopers’ widows have been great. It isn’t just down to one or two of us. I know widows in their early twenties with babies who have been magnificent. You don’t seem to hear about them.”

The wife of one of Ian’s officers agrees. She says: “We wanted. Marica to talk to the Mirror because we think there’s going to be a tribute to 3 Para and Ian’s memory as well as 2 Para and Colonel Jones.”

This officer’s wife was the one who broke the terrible news to Marica. She said: “That was the last time I’ll do that. I would never want to go through anything like it again.”

Marica says: “I knew, when I saw this lady at the front door that it was bad news. I can’t remember much about that morning. I went out shopping a lot. Within the few weeks I think I bought half of our local Marks and Spencers. It was like a therapy. I knew I had to get out of the house, had to do something and spending money seemed to be the best way.”

Marica carries a few pictures of Ian in her handbag. She brings them out and spreads them over her lap. He was so handsome, and Marica giggles softly, rather like a schoolgirl looking at a rock idol. “He was, wasn’t he?” she says.

“When 1 first went to Aldershot as a young girl we were always warned about the Paras. ‘Oh, you mustn’t go near any of them,’ people would say. But, of course, we did. I was a dental nurse in Queen Alexandra’s Nursing Corps, and my father was a military man, so you might say I’ve been used to Army life.

“I really cannot imagine life with a nine-to-five husband although occasionally Ian and I would talk of the days when he would leave the Paras. He wrote beautiful letters, full of descriptions about the sea and Ascension Island.

“Once he wrote, ‘Do not despair of us. I’m coming back – after all, we’ve got two weeks’ holiday booked and there’s no way I’m going to miss out on that.’ That was the one thing he was looking forward to. Some of those letters arrived after I’d been told of his death.”

All Marica has left to look forward to now is Ian’s body coming home next month. Their beautiful little daughter, Melanie skips about the room. When they posed for our photographers, Marica would say. ‘Come on, a smile for Daddy.’”

Marica says: “I’ve told, her that he’s gone to another place. That’s all she can cope with at the moment.

“My first husband has been marvellous. He broke the news to Donald. Ian and Donald were so close – you wouldn’t know he wasn’t his father.”

I asked if she was bitter about his death. She said: “A VC cannot compensate for the loss of your husband, but I suppose it’s something of a consolation. No, I’m not bitter at the moment, although I will be if a report comes out which shows that the whole thing could have been settled diplomatically.”

After Ian… well, other men seem a bit of a joke to Marica. She asked: “Who can measure up to him? No one.”

Marica said Ian’s parents had three sons, but Ian was the only healthy one because both his brothers suffer from the wasting disease, cystic fibrosis.

This litany of disaster seems too much for. Marica. It’s time to get off the subject, time to think about films, shows she wants to see.

She fingers a brooch on the lapel of her coat – the emblem of the Parachute Regiment. “They broke the mould when Ian died,” she says. Tears glinting for the first time. “There’ll never be another one like him.” 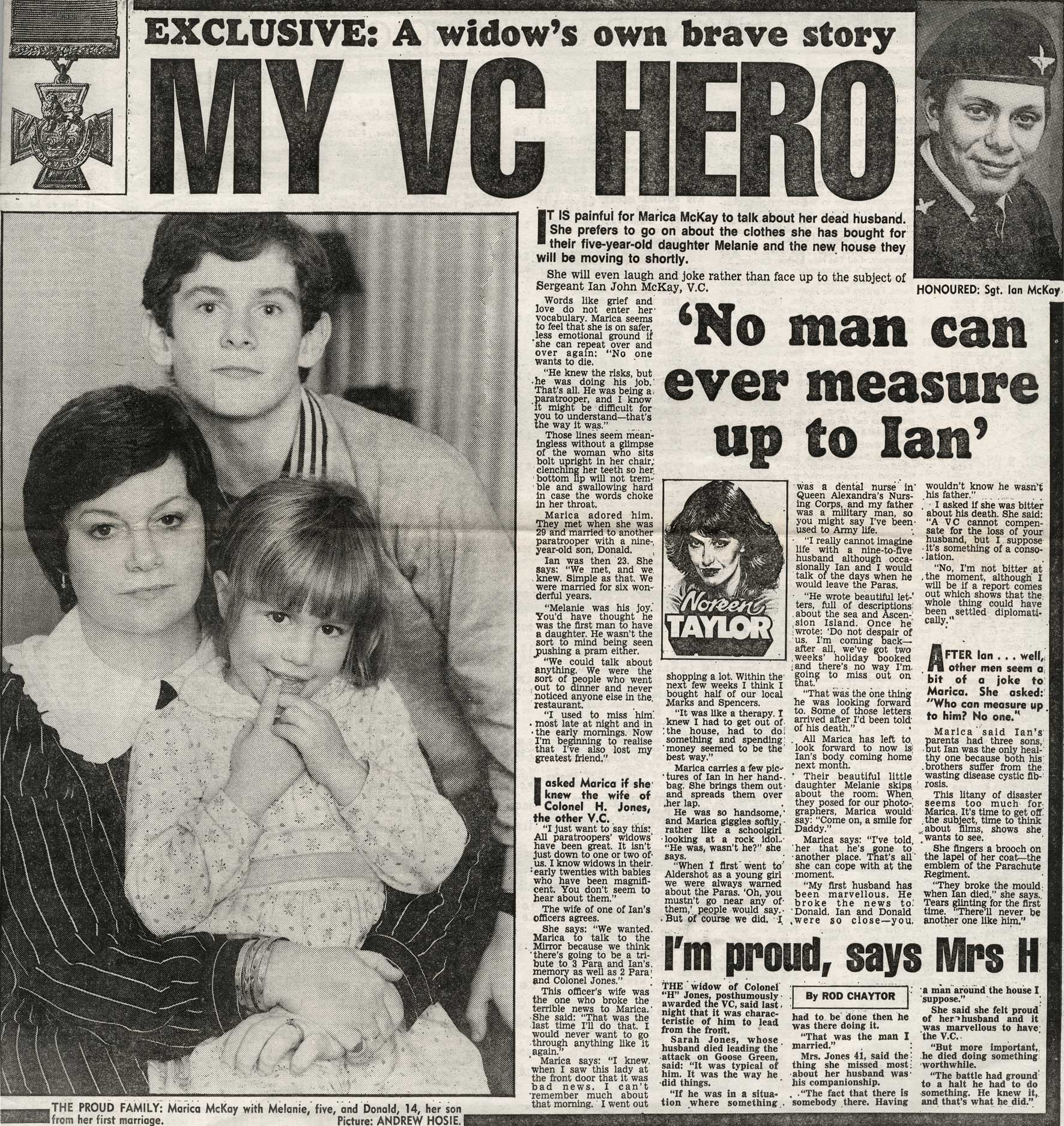