Andrew Parker Bowles: The man who laid down his wife for his country 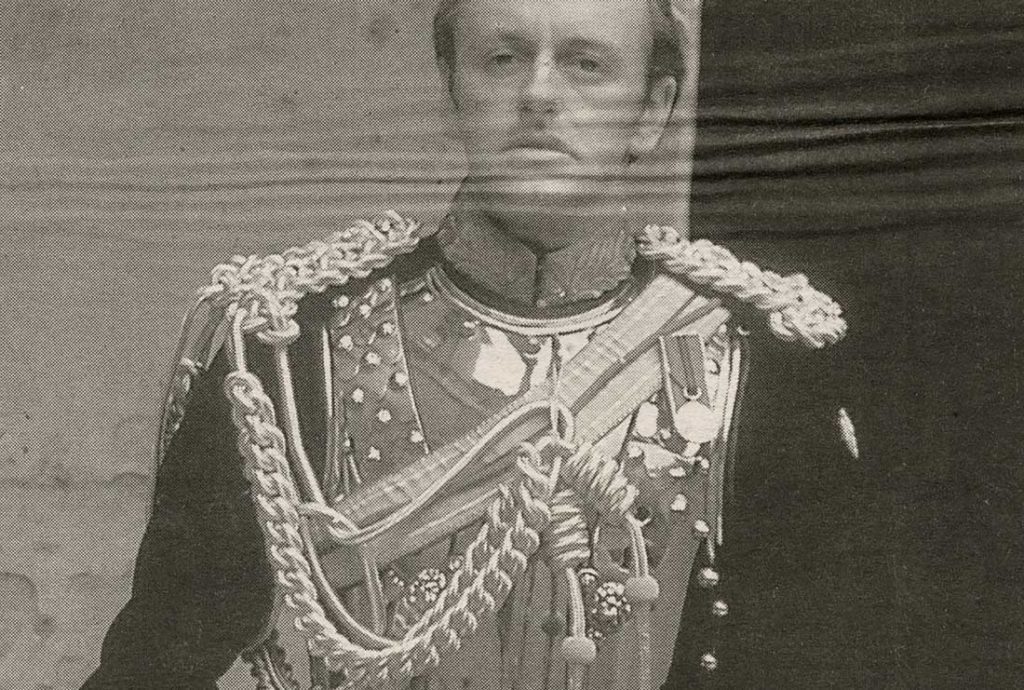 There cannot be a husband in the country who doesn’t wonder: what kind of man is Andrew Parker Bowles? Never mind that Prince Charles referred to Camilla and Andrew in last night’s TV documentary as “dear friends”.

As far as most of us are concerned, he is either an upper-class twit or a down-trodden saint. Doesn’t he mind being a laughing stock in front of everyone? How thick-skinned can he be knowing that even among the upper classes he is sniggered about as the man who laid down his wife for his for his country.

On the now infamous Camilla tape he was known as “A”. “Oh, A is coming home for the weekend” an exasperated Camilla tells Prince Charles who responds with a groan of frustration. The shame and humiliation of being spoken of in this way would have enraged the mildest mannered man.

But Brigadier Andrew Parker Bowles doesn’t appear to be in the least perturbed that he will now go down in history as the man who was cuckolded by the Prince of Wales. Andrew, say those who know doesn’t give a damn. In fact, he was seen last week pulling up outside the house of a friend, Caroline Benson, laughing as though he hadn’t a care in the world: “Come on Chubby, better get a move on if we’re going to Wimbledon.”

That he and Camilla have an open marriage is no secret. She lives in their Wiltshire home, Middlewick House, while Andrew stays in his London flat, joining her at weekends.

Although Parker Bowles has always been considered a bit of a devil with other women, terribly fanciable and dashing, he was careful, discreet and took care not to embarrass his wife. His feelings now, says an ex-Army friend have little to do with shame, since he is not the sort to be bothered by middle-class conventions.

“But he is angry at the fuss being made over an arrangement perfectly amicable for all concerned. Now it’s public knowledge it has screwed things up for everyone and made Andrew feel a bit of a fool.”

Fool or not, Andrew Parker Bowles remains one of the royal family’s favourite people. The Queen Mother adores him, invites him for weekend lunch parties and to Cheltenham races. Blond, blue-eyed Andrew is an adventuring, devil-may-care sort, a buccaneer who makes the royals laugh and has always had other women in the background.

When Camilla met him, he was 27 and must have seemed a sophisticated man of the world compared with the rather immature Charles. Andrew and Camilla were together for seven years before they married, long enough for Camilla to realise there would always be other women in his life.

Nevertheless, she was the one who made the running, even charging up to other girlfriends such as Lady Caroline Percy and asking: “What are you doing with my boyfriend?”

“You can have him when I’m finished,” was the prompt retort at one night. Lady Caroline later spoke of Andrew as someone who behaved abominably towards Camilla. “But she was desperate to marry him,” said Caroline, who later discovered he was having a third affair with a married woman.

Prince Charles must have seemed a peaceful harbour compared with the passionate storms rocking Andrew and Camilla’s early married life. At least he needed her, longed for her in the way her freedom- loving husband never did. Ironically, it’s now Andrew Parker Bowles who has been cast in the role of wimp. He is the one we all believe to be the spineless husband, too weak to put an end to his wife’s affair with the Prince of Wales.

But what do we know? Upper crust marriages are rarely to do with falling in love, being faithful, and spending time together. For the Parker Bowles’ set, marriage is being able to gad about freely, seeking sexual fun when and where you can, just as long as you don’t frighten the horses or shock the more sensitive values of what they see as the servant class.

Large country houses and town flats make it easy to enjoy extra-marital activities. A county couple indulging in affairs are considered good sports, as long as they aren’t found out.

As one of their Wiltshire friends says: “This sort of thing goes on all the time. No one would have taken any notice except for the fact that the man in the middle is the Prince of Wales. Anyway, what can poor Andrew do now? He has led his own life for years, and everyone knows he’s had girlfriends.

“What’s he supposed to say to Camilla? He’s behaved like the perfect gentleman in the most awkward circumstances. He’s been loyal to his prince and his wife”

So, rather than threatening to thump Prince Charles if he doesn’t leave his wife alone, Andrew Parker Bowles is more likely to sympathise with his wife: “Cheer up old girl. Too bad everything got blabbed about. Another gin and tonic?” 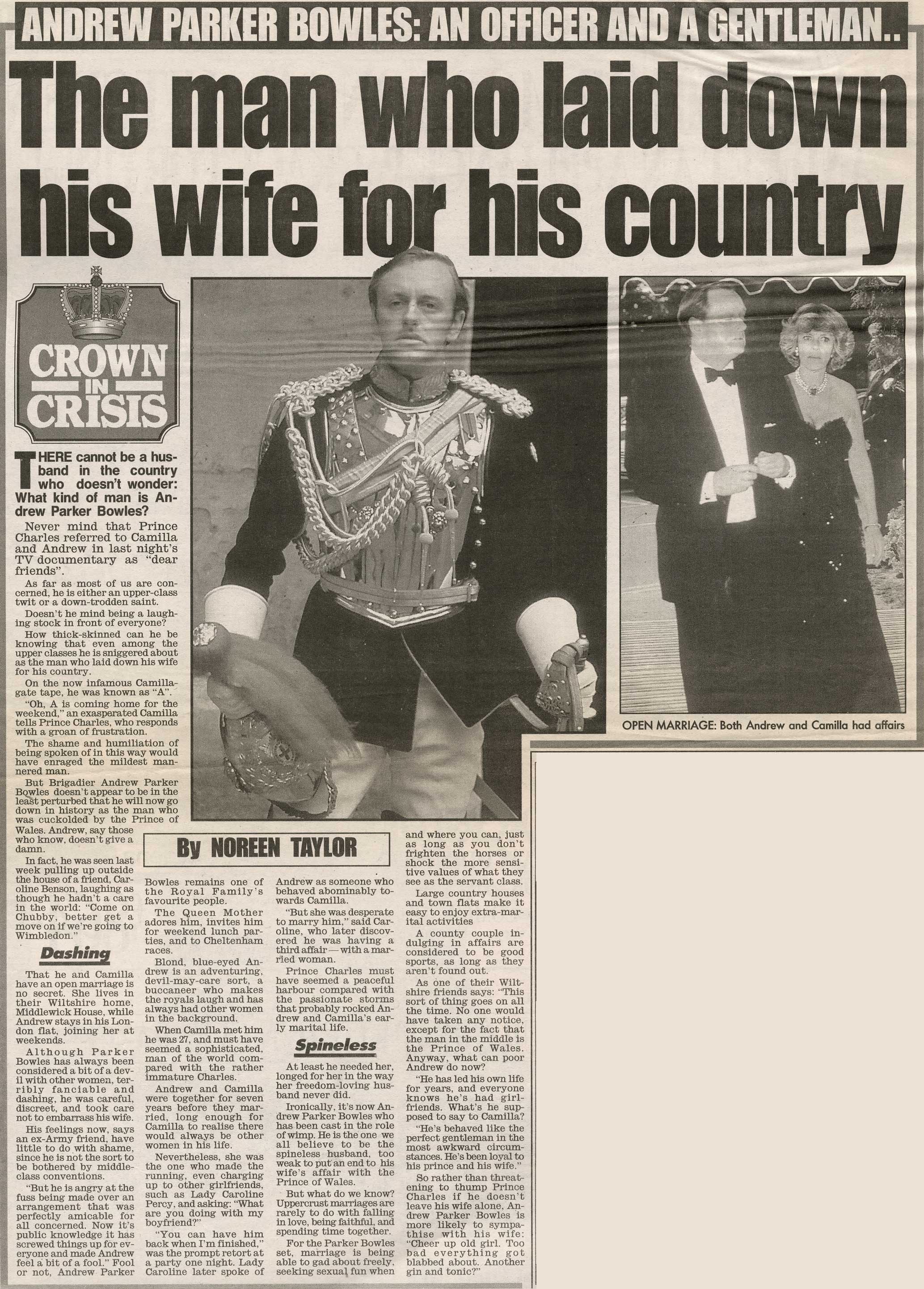