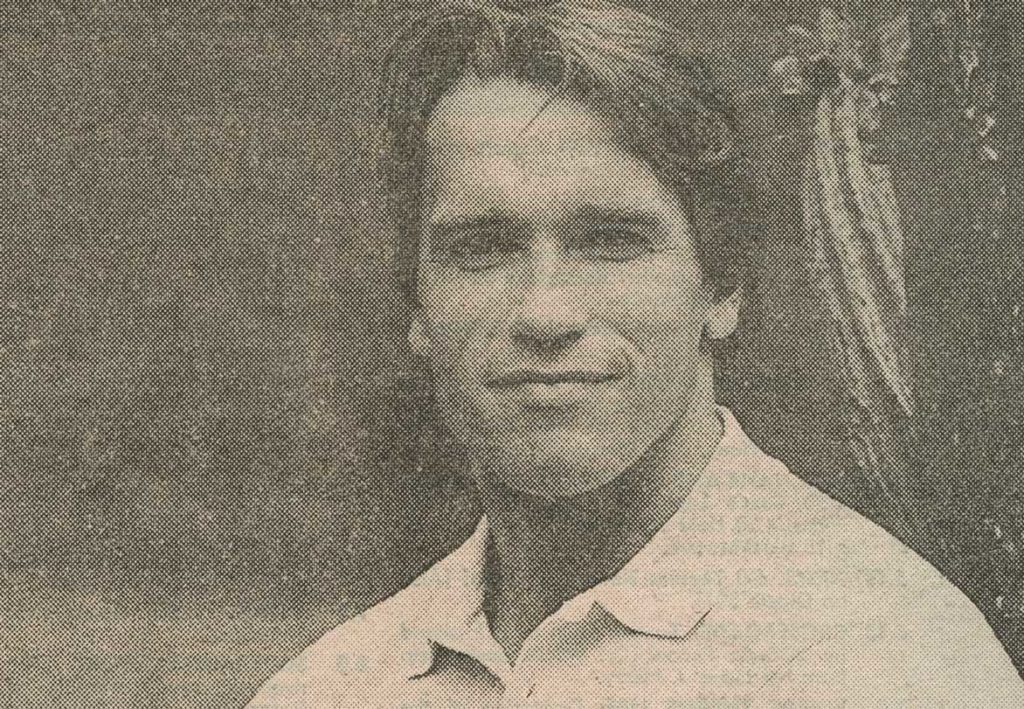 Arnold Schwarzenegger, winner of the Mr Universe contest, holder of seven even mightier Mr Olympic titles, star of the muscle movie, Pumping Iron and hero of Conan The Barbarian, did not want the salad. “Strike the salad,” Arnold commanded the waiter, “I’ll stick with the fish.”

Glasses of iced water stood firmly between us. Arnold doesn’t take chances with his health, not while he is promoting his latest and probably his most challenging film so far, Conan The Destroyer.

It should be explained that Arnold is to Conan what Stallone is to Rocky, and Clint Eastwood is to Dirty Harry. Except that Arnold acts as though he has hired Ringo Starr as a drama coach. “Is that a draught coming from behind me?” he asked in his amusing Austrian accent.

Arnold left home when he was twenty because he felt Austria was too small to hold him. “I huff chust left 100 degrees of heat in California, so to me it is really cold.”

Arnold is 37, six foot two, 15st 101b, and looks as though he has two boulders stuck up the sleeves of his custom-made blazer.“Yes, I huff everything specially made – suits, shirts, coats…. everything. Maybe I should huff some tea with lemon.”

In the Hollywood handout, it states that Arnold was a weak, sickly child, always in the shadow of his elder brother. It goes on to say that when Arnold was fifteen he struggled against his childhood fragility and discovered body building. “That is a lot of rubbish. I nefer told them such things. I was always a healthy child.”

A cloud of irritation passed over his giant face and returned when I asked if having a body like his meant he is in danger of being typecast. Perhaps he shares the same dilemma with the curvy pin-up who wants to be an actress.

Arnold studied thighs wider than oil pipe lines and said nothing. Was he ever considered a freak… a sideshow? “I am nefer a sideshow – always the main show. Women do not come up and chust say ‘Arnold, I like your body.’ They might tell me I have a cute accent or an interesting mind. But I think making remarks about a person’s body is a bit uncool… a negative response.

“Perhaps somebody makes a remark on the beach…I’m not honestly aware of it. Although on occasions friends huff said to me, ‘Arnold do you realise everyone is staring at you?’ Sure, there are body-building groupies, but the women I go for is independent, aggressive and intelligent.

Like his present girlfriend, President Kennedy’s niece, Maria Shriver? “Yes, like Maria. I luff that family”, said Arnold, a row of monster molars gleaming in response to a question about marriage. “We don’t talk about marriage. You meet the top people in the world when you are with that family. They are very sporting, very active, yet before me Maria had nefer considered bodybuilding. Now she is at the gym eferyday, and sometimes I huff to say, huh, giff me a break.”

At last Arnold decided that the room was warm enough. He took his jacket off and tried not to notice that my eyes were riveted to his King Kong size chest—a chest swollen by lifting 160lb dumbbells for as long as five hours a day.

To be fair there is more to Arnold than a large chest. He is the first body-builder to turn his biceps into big business. Books, a work-out album and television shows have made Arnold a millionaire and America’s number one beef cake personality.

Lucille Ball spotted mypotential on television. You see, it is not enough to be Mr Universe… you must rise to shallenges, take risks, To pensions say no, no.”

And that’s more or less what Arnold says to women who do not share his interest in muscles. “I can huff a relationship with a woman who is not into her body. Yes. But then I am going to ask myself what is she going to look like after thirty if she does not work out. Eferything will chust hang. And how can a husband be turned on if his wife is sitting like a slug stuffing her face with pastries? Out of courtesy I would expect a woman to take care of herself.”

Arnold was in the middle of describing the merits of horseback riding and how the reciting of lines like – a fine wine grows on the vine – helps his accent, when the door to the private dining room opened.

A tall, tanned blond who looked as though he’d been mainlining on orange juice walked in. He shook Kevin Keegan type curls and announced: “I’ve just been down King’s Street, sorry Road, and I’ve bought the craziest leather trousers Arnold. I’m not kidding. Wait till you see them on. I tell you Arnold, they are wild. Crazy.”

“Really Alan,” said Arnold struggling to peel on his jacket. “Sounds gute, but I don’t think that stuff is my scene. It’s OK if you’re slim, on me I thinks it’s more the classical look.”

Alan, travelling companion, works out with Arnold, but that afternoon was going to be spent tracking down the right cashmere sweater. Even Conan The Destroyer feels the chill. 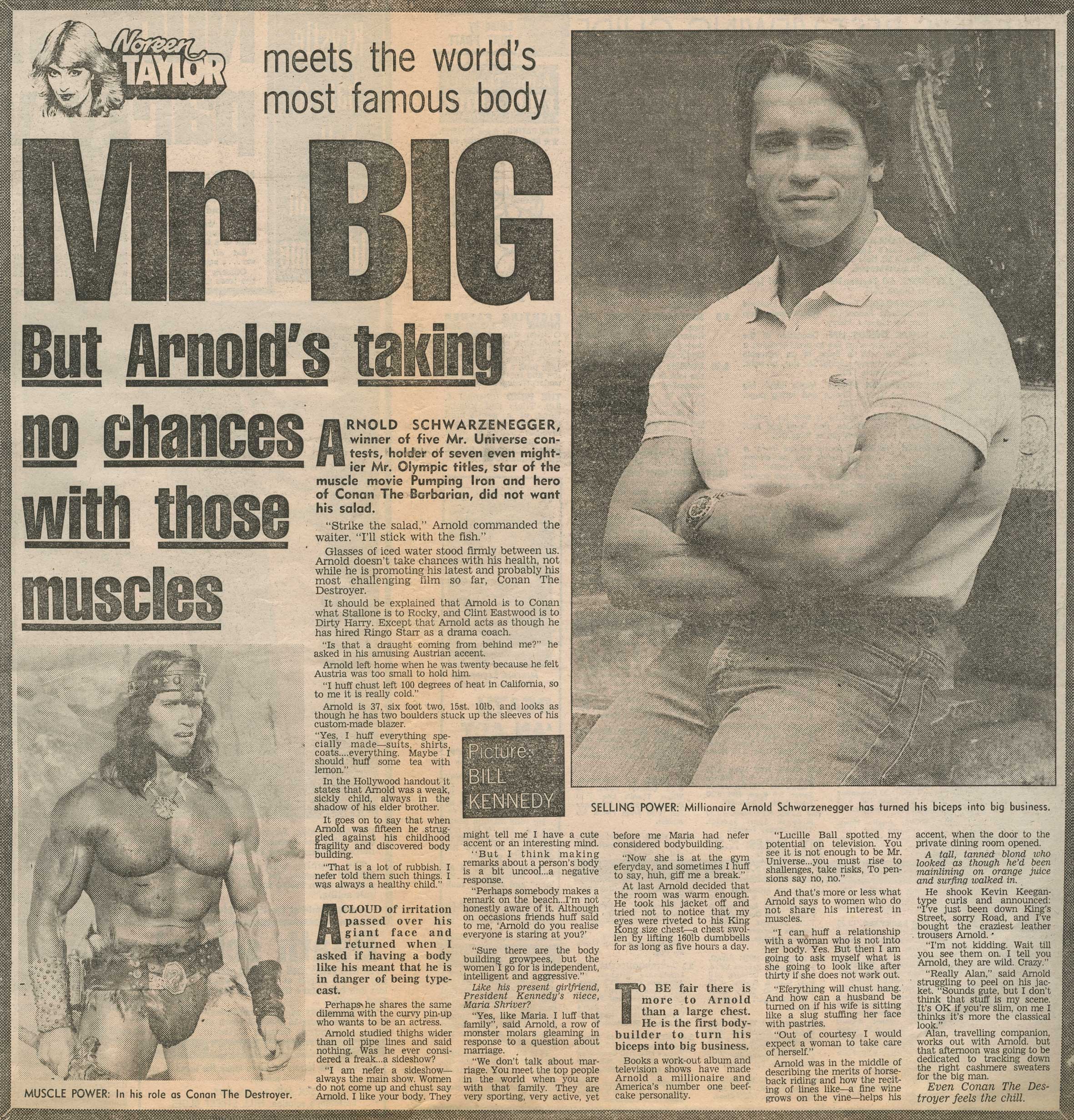