Barbara Cartland — How the queen of romance upset Lady Di

Interview with Barbara Cartland, published in the Daily Mirror, June 1981 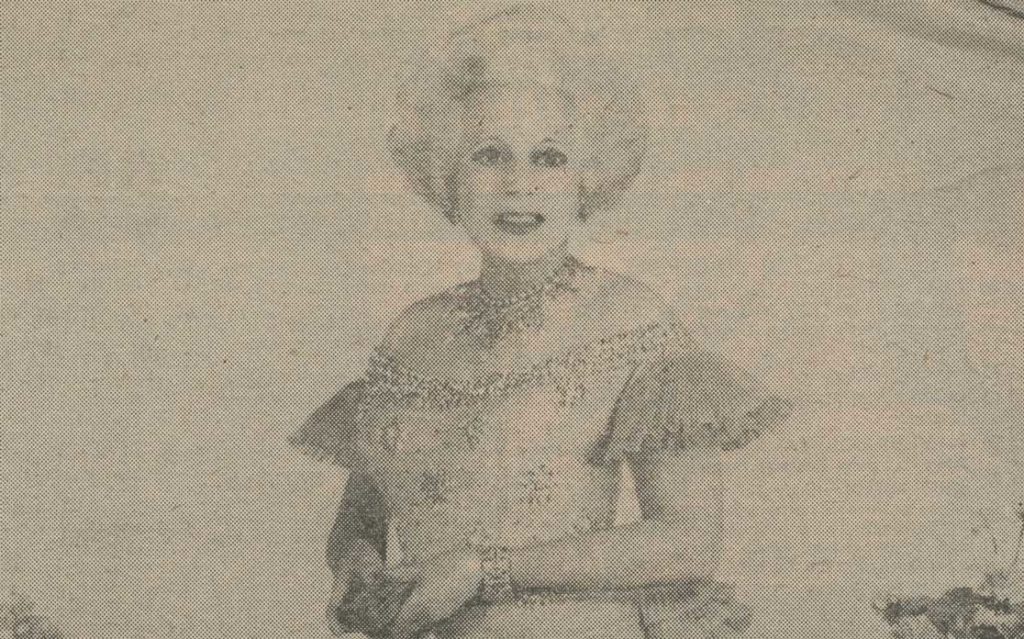 Barbara Cartland’s blue eyes flashed icily like the magnificent sapphires that hung from her ears. There was no mistaking the bristle of irritation at the mention of those two words – Royal Wedding.

“I’m really sick to death of being asked about the wedding. Hasn’t enough been said about it already? And that ridiculous title, step-grandmother – whoever heard of a step grandmother?

“After all, this was supposed to be the Barbara Cartland year. My year. My eightieth year, my 300th book, my cassette of songs, my two scents and all my lovely sheets and curtains. Instead it has all been a frightful bore, with everyone being horrid and bitchy.”

The Queen of Romance is not amused by suggestions that she has been exploiting her new royal connections. Four years ago, Barbara’s daughter, Raine, divorced the Earl of Dartmouth and married Lady Diana’s father, Earl Spencer.

Until the royal engagement Barbara Cartland had been used to ruling her own publicity. Now, whenever she opens those pink Cartland lips, she is aware that every word remotely connected with the subject of Diana and Charles will be frowned upon by the Spencers and the Palace.

“I’ve never moved in royal circles. My only connection with all of this is that my daughter, Raine, and Johnny Spencer happened to fall madly in love and got married.

“You know, dear,” she said powdering a face as pink and white as one of the virgins in her novels, “I’m one of the last great English eccentrics. I’ve brought love and hope into so many women’s lives. I can’t change. I can’t suddenly become someone I’m not.”

And indeed, why should she? The rhinestoned writer who has sold 200 million paperbacks, and makes public appearance bedecked in pink ostrich feathers and Hartnell ballgowns has always been a star in her own right.

Her beautiful country mansion in Hertfordshire, with its vast rooms and servants could easily provide the setting for one of her novels where the aristocratic young heroine is continually beating her tiny fists against some broad, uniformed chest.

From 1pm until 3.30pm every weekday Barbara Cartland lies on a sofa in her grand library dictating stories like, The Frightened Bride. “You will think me very ignorant, but I know that when a man and a woman are married they do something together… But no one has ever told me what it is.”

Barbara’s bashful brides and helpless heroines have made her a fortune. Her books have been translated into twenty languages and she has recently reached the top ten of the American bestseller charts.

Her non-stop paperback flow has been equalled only by her verbal flow on subjects from sexual equality, of which she disapproves, to the benefits of vitamin pills of which she swallows over eighty per day. She has fought for the rights of gypsies and midwives and for better conditions in old people’s homes.

Now, the lady who has never minced words to get what she wants has to practise that demure line: “Sorry, but I can’t talk about that. Diana has written to me personally thanking me for not talking.”

Barbara said she was terribly upset and took great umbrage over the tours I arranged with British Airways for my American fans. (The Barbara Cartland Romantic Tours of England, which included Althrop House and Barbara’s house, Canfield Place.)

“Yes, Diana was upset over that, and so were the other girls (Sarah and Jane). Between you and me I did try to stop those tours, but it was too late. All the arrangements had been made months before the engagement was announced and the organisers would not allow me to cancel.

“The Press, who have been always behind me in my campaigns have been quite beastly about it. Poor Raine, she is going to have to live with this for the rest of her life.” Suggestion of a coolness between Barbara and 52-year-old Raine are scorned. “I would like you to get this straight. Raine and I are as close to each other as we have always been. Johnny, my son-in-law, is giving an enormous luncheon part for me in the grand dining room at Althrop to celebrate my birthday.

“Terribly sweet of him. I hope you’ve got all of that because I want to put an end to end suggestion of rifts in the family. Such evil gossip, just like those people who said the Queen does not want me at the wedding. How ridiculous! The Queen is far too busy to think of me.”

As everyone now knows, Barbara will not be among the 2,000 at St Pauls on July 29. Instead, of sailing up the aisle turning heads she will be watching from home like the rest of us. So why did she turn down the Spencer invitation? Her gold-embossed explanation is as elusive as any palace announcement.

She said: “Johnny had fifty tickets and he very sweetly offered me two in spite of him having so many others to ask. I thought about it for a while and eventually decided that it would be so much more appropriate if my sons, Ian and Glen, went in my place. I’ll just be as happy sitting in front of the television finishing my book.

“People have been very kind. So many have written to say how disappointed they were that I wasn’t going.” Would she have wowed the fans with some glamourous outfit?

“Oh… I don’t know. But whatever colour I was dressed in, whether it was Cartland Pink or anything else, I’m sure I’d be accused of stealing the limelight.”

And that, I can’t help suspecting, is the real reason she turned down the invitation. This youthful, vivacious woman who will be 80 on July 9 has some very special memories of her own. One in particular brought a moment of sadness to her face.

“Dickie Mountbatten was the most dashing and romantic man of the century.” A large, silver-framed photograph of Lord Mountbatten in uniform stood on the table behind her. She pointed to the black labrador bounding across acres of carpet in the coral and turquoise drawing room. “This is Duke, a present from Dickie. He had him specially house-trained before he gave him to me. When I heard that darling Dickie had been killed, I felt numb. I couldn’t feel anything for days.”

Her favourite topic is love, the great love that every woman desires, yet she rarely mentions her own loves. She married her first husband, Alexander McCorquodale, in 1927 and the marriage was dissolved six years later.

“He was a wealthy man, but I wasn’t happy. My divorce was terribly messy, and I ended up broke with only my daughter and my talent. That was when I learned to survive and support myself with my books.”

Three years later, she married Hugh McCorquodale, her first husband’s cousin, by whom she had two sons. She said: “He wasn’t so wealthy, but we had 27 blissful years together. We adored one another, and when he died I couldn’t face the idea of marrying again and the upheaval of learning to live with someone else.

“Besides, men of my own age usually seem so much older than me, and they can be terribly sensitive about sex if it doesn’t work out properly. My two sons telephone every day, so I’m never lonely.”

Will she have any regrets about missing what might have been one of the most exciting days of her life? “Yes, but I won’t realise how much until afterwards. Then you may ask me about regrets. Meanwhile, I shall behave as the royals do when they are attacked. I shan’t defend. I shall just bury my head in the sand until it is all over.” 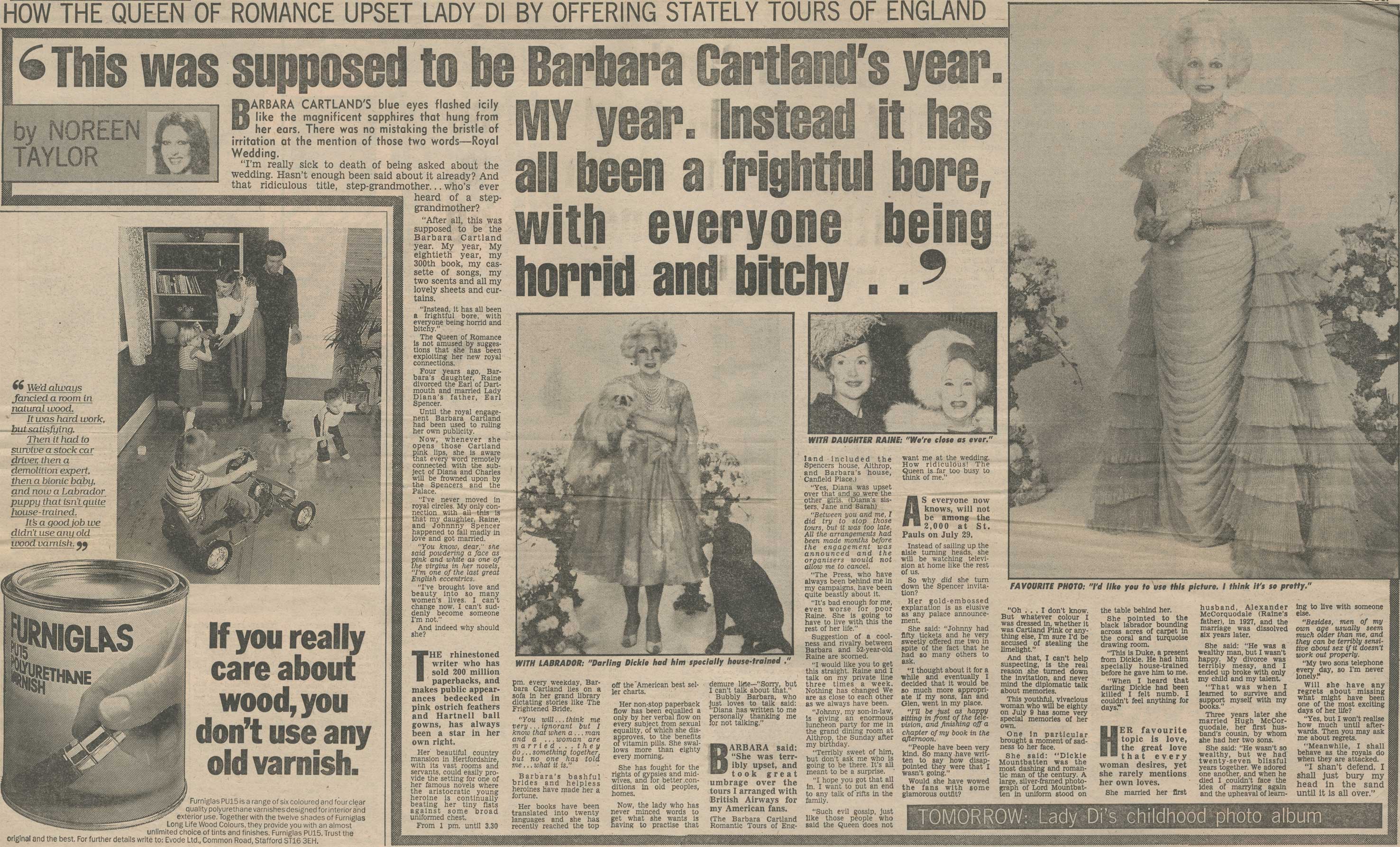