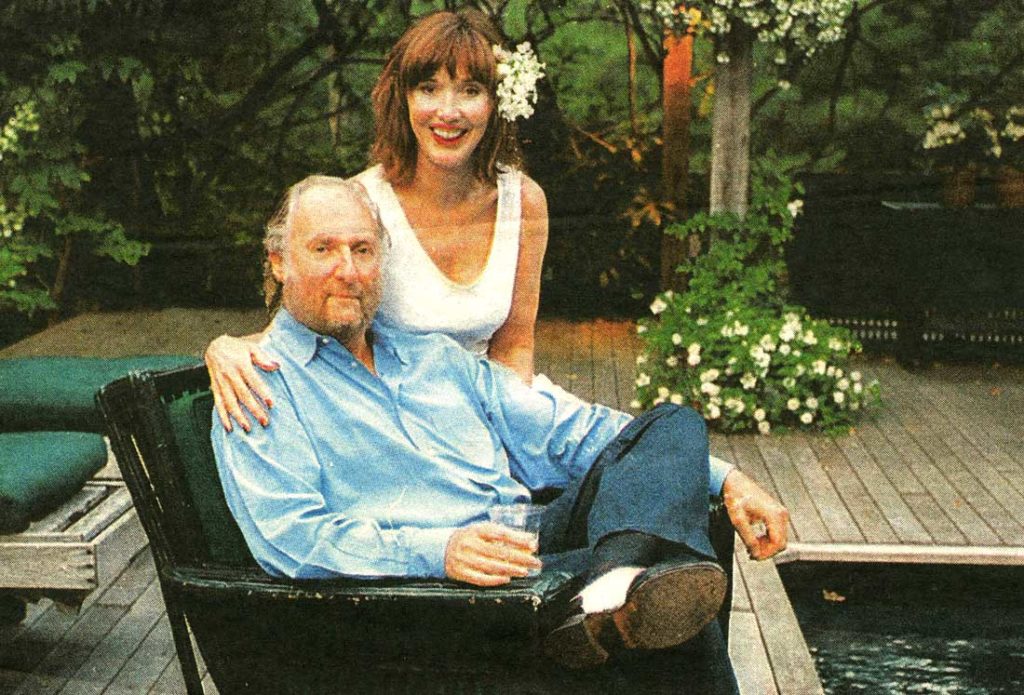 Ed Victor, Britain’s most famous literary agent, is on the phone to June Newton, the wife of Helmut, the world-famous chic photographer of naked women, and they are talking about, who else? The famous.

“I’d love to see you, June,” he croons down the phone. “Did I tell you I saw Roman last week on holiday? Roman Polanski.”

It’s easy to mock him for name-dropping, or his penchant for party networking, but it’s all part of the way Victor operates. He handles 50 or so of the world’s bestselling writers, including Jack Higgins, Frederick Forsyth, Erica Jong and Erich Segal. Also benefiting from his formidable negotiating skills on their behalf are Nigella Lawson and Anne Robinson.

Another of his lucrative enterprises is handling the estates of writers such as Raymond Chandler, Irving Wallace and Iris Murdoch. When fashionable people talk about Ed Victor, as they inevitably do, they all pay him compliments on his deal-sealing ruthlessness. If they are being rude, and that’s hardly unknown, they allude to him as the flash Bronx boy who’s made good.

They may be right about the geography, but flashness is very far from Victor’s self-image and, in fairness, from reality. “This isn’t the kind of life I dreamt of when I was growing up,” he says from the depths of the green sofa in his elegant Bloomsbury office.

Pictures of Victor and his wife, Carol, adorn the walls on each side of the fireplace. One shows them posing in the cottage they once rented in the grounds of Sissinghurst Castle. “Beautiful room,” he says. “But having three houses was a little excessive.”

His year is now divided between a London flat in Regent’s Park and a summer house in the Hamptons, New York state. “As a boy I had this image of becoming an Ivy League professor, wearing a tweed jacket with leather patches on the elbows, lecturing on Henry James and driving an old car. Then I won a scholarship to Cambridge and the dream shattered. Those professors were largely sedentary, inward-looking people, not the kind of person I wanted to be.”

Victor is tall, with a leonine head and penetrating, watchful blue eyes, the kind that never miss a trick. He is wearing a grey suit with a black polo-neck sweater, and he stands up to show me that the suit is now at least two sizes too big for him.

“I was getting fat, but thanks to excellent tailoring, no one knew. After all, I do live it up — parties, cocktails, dinners, lunches. And since my mother died last year I’ve been comfort eating. So, I worked out a diet for myself, one so successful that I decided to write a book, to share my discoveries. It is all about paying attention to the needs of your own body. No one knows your body as well as you do.”

Victor has lost more than 3st on the diet, which advises eating two healthy starters instead of a main course, buying your own food for plane journeys and having a “cleansing day” once a week.

Born in New York in 1939 of Russian Jewish parents who met at an immigrants’ club, Victor describes his upbringing as one of classic immigrant ambition. “My parents were not literary nor well educated, but they imbued me with a feeling that there was nothing I couldn’t do. I grew up perceiving life as a long highway littered with green lights.”

His only sibling chose not to follow the steep climb onwards and upwards. “My brother could not be more different from me. He’s a retired teacher who lives in Thailand – we’re not particularly close.”

After gaining his degree in literature in the 1960s, he stayed on in London and joined Weidenfeld & Nicolson. Positions in other publishing houses followed. His first marriage to Micheline, the mother of his two elder sons, broke down and he returned to New York.

At a cocktail party he met a lawyer called Carol, fell in love, and they took a year out to travel the world. “At the end of that year we decided to return to London and I remember saying to Carol, ‘When we go back I’m going to make us a lot of money. I don’t know how. I’ll figure it out.’”

That was in 1976 and the result was the creation of the Ed Victor agency.  “No one believed how frightened I was during those first months. I’d wake up at night in a cold sweat. I even did my own accounts, so no one would be able to pull anything on me.

“Yeah, I’m ruthless. I do whatever it takes. I have a job to protect and advance the interests of my clients. If I need to get somewhere and someone is blocking me, I’ll knock them down. A childhood in the New York streets is great training.”

Now an integral part of the London literary scene, Victor has brought aggression, glamour and sex into a profession once proud of its laid-back fustiness. He says: “I couldn’t believe it when I had lunches with these people and they wouldn’t discuss business until the coffee came.”

Accompanying him as he glides through the salons of London is the tall, elegant Carol. “We are equals, complementary partners. She tells me, ‘I’m in charge of the homes, you are in charge of the rest of the world’. Elegance and grace fill my life.”

Carol retired from her legal career 16 years ago, when their son, Ryan, was born. “We are a happy little family,” he says. Does he ever worry that a younger Ed might come along?

“Never. Jealousy is not part of my machinery. I’m thrilled when I hear of another agent’s success. My only concern is making a ton of money for my clients, and I do.

“It’s such a thrill when I make a deal for a client that means they can concentrate on writing. Take the journalist Paul Eddy. He was part-way through a novel, but he needed an advance to complete it. His previous agent told him he’d have to finish the book before he could sell it. Paul sent me his early chapters; I just knew the novel had great potential. I sold it and got him the money he needed to live on while writing. Now his family call me Saint Ed.” 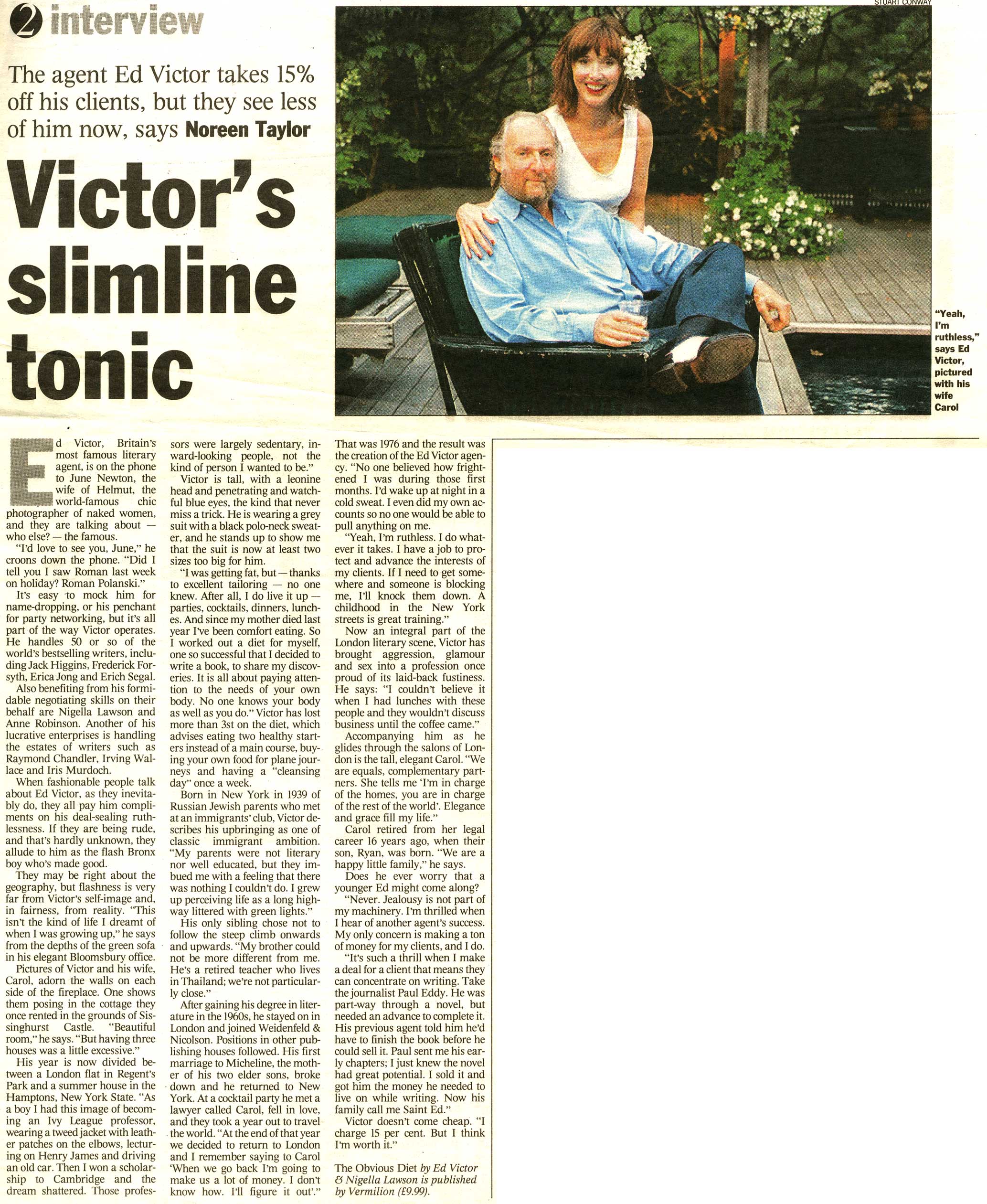