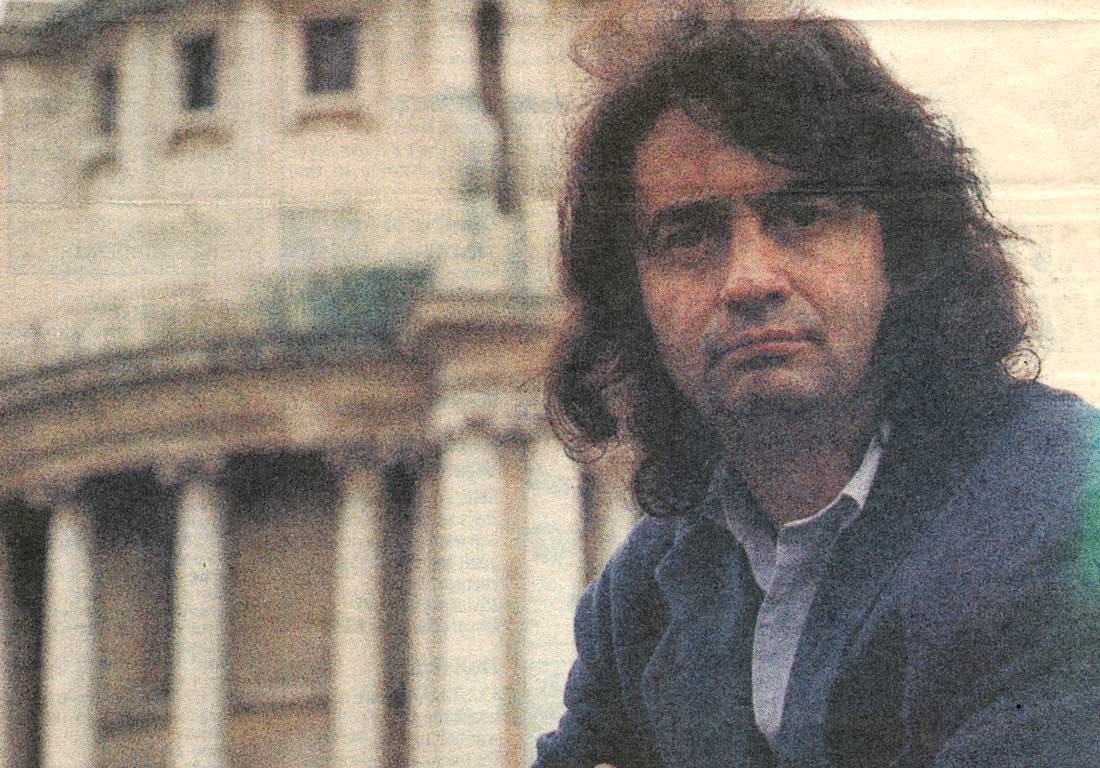 He seems such a bouncy, happy man, Gerry Conlon. Indeed, if you bumped into him and knew nothing of the Guildford Four, the 15 years of wrongful imprisonment, the false charges against his father, who in 1980 died in jail from emphysema, you’d think he was a carefree lad in his 20s.

But Gerry Conlon is close to 40, and has lived through the kind of nightmare you could only comprehend taking place in some right-wing dictatorship, not Britain with its reputation for justice and fair play for all.

“I suppose,” says Gerry, “that some good comes out of everything, no matter how bad you might think some, things are. Little did Paul Hill and I, two kids from the wasteland of Belfast, believe what would happen to our lives. Here’s me, having a film made about my life and there’s Paul living in New York married to one of the Kennedys.”

The film is the highly acclaimed In The Name Of The Father, made by the team responsible for the Oscar-winning My LeftFoot.For 15 years, until 1989, Gerry Conlon knew only the confines of a prison cell. But recently his life has been a has been a merry-go-round of premieres and US talk shows, limousines at airports, and strangers who’ve seen the film fighting to shake his hand.

The film stars Daniel Day Lewis as Gerry and Emma Thompson as the lawyer who takes up his case. Day-Lewis has become one of Gerry’s pals. “Honestly, Dan’s great,” enthuses Gerry.

“Me and him, we hung out together for weeks in Belfast, just going around bars, him picking up the accent. If you think his Belfast accent’s good you should hear his Kerry one. My mother loves him. He’s always writing to her, sending her chocolates and flowers.”

Although a lover of his home city, Belfast, Gerry Conlon adores London and the English. “Sure I do. It’s where my best friends are. It was the English who campaigned to prove our innocence,” he says. “When the director, Jim Sheridan told me he wanted to make a film about myself and my father, I said sure, but under one condition – no  prejudice against the English.”

The film is a powerful and searing account of how a massive conspiracy succeeded in imprisoning and wrecking the lives of two families. Apart from Gerry Conlon, Paul Hill, Carole Richardson and Patrick Armstrong, the Guildford Four – there was Guiseppe, Gerry’s father who came over from Belfast to help his son, only to find himself, arrested and imprisoned as an IRA terrorist.

Then there was Gerry’s aunt Anne and her husband, Patrick Maguire, Tory-voting, lace-curtain Irish who lived in London with their two teenage sons. They were also charged in connection with the Guildford pub bombings that killed five people in 1974. The whole family was sentenced to a total of 73 years in prison, until their innocence was proved ten years later.

Gerry felt sick when he first saw Daniel Day-Lewis portray the beatings he endured during police questioning. It was even harder to watch Pete Postlethwaite play his dying father. “That was rough because he looks so much like my father that it broke my heart,” he says. “Yet the film plays down a lot of the brutality. It’s not nearly as violent as the real thing.

“I still wake up at nights, screaming, soaked in sweat, back in the middle of it all. And I suppose the dreams are something I’ll have to live with for the rest of my life.”

His sister, Ann, who has joined him in London, for part of the publicity tour, remembers the day of her brother’s release as one of wild happiness mixed with sadness that their father wasn’t there. “He would be here today if he’d received proper medical treatment,” she says. “Instead the prison authorities gave him cough syrup.”

“If it wasn’t so tragic, the whole business would have been like a black farce. My father a terrorist? Everyone at home remembers my father as thin, sick man. A man who could barely manage a flight of stairs because his lungs were damaged through his job as a paint sprayer.

“My mother is still a heartbroken woman. She often says, ‘Maybe before I die God will give me the reason why all this has happened.’ As far as we’re concerned, no settlement from the British government, not that we’ve had a penny, can make up for the loss of his life.”

Ann says her brother is a changed man from the hooligan years of his youth. “He’s a mature, educated man now, able, to mix with anyone”.

Gerry agrees: “I like the kind of life I’m leading now. Buzzing around different countries meeting new people, campaigning for other innocent prisoners. “I’m always aware I have 15 years taken out of my life to make up for.” 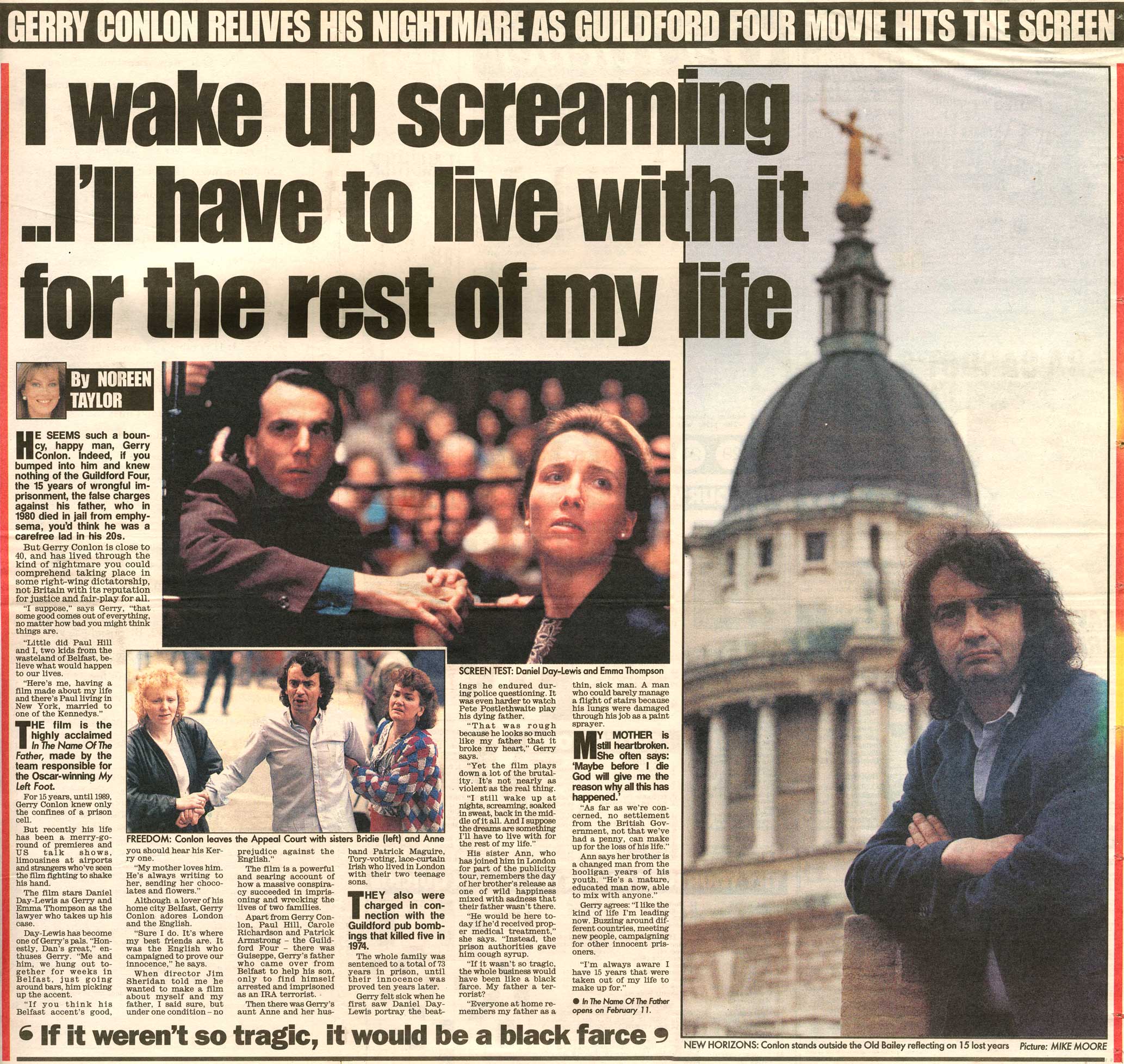