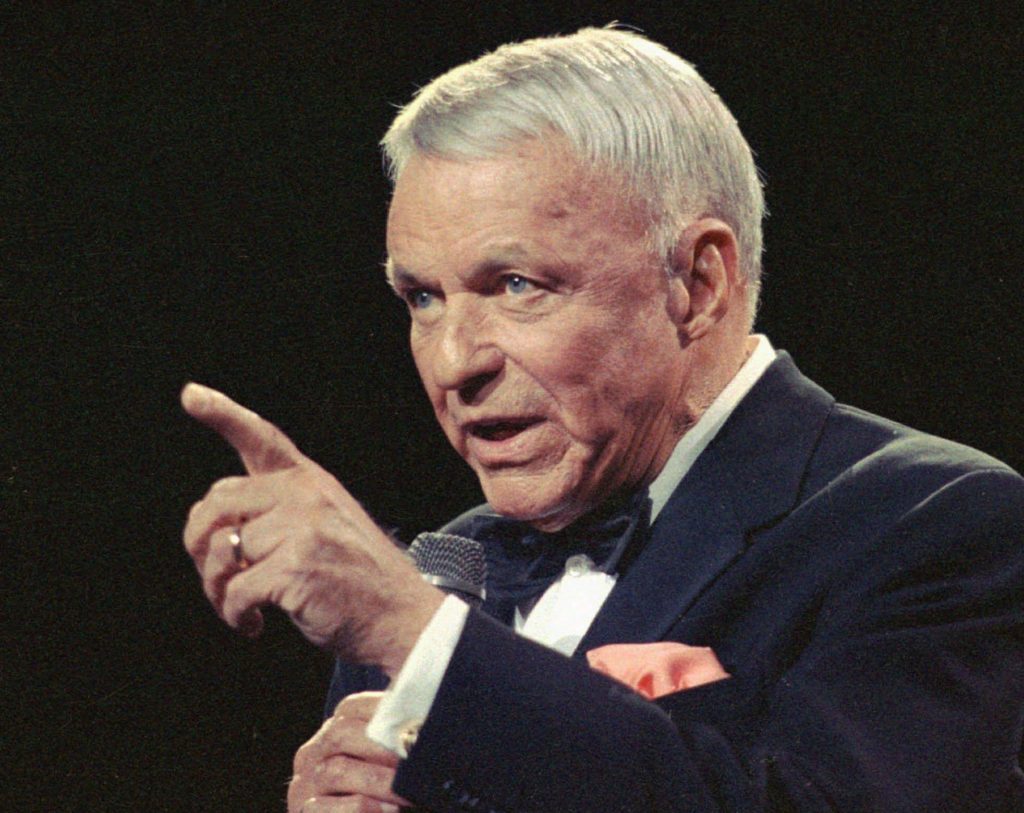 For the rich, elegant customers dining quietly in London’s stylish Ristorante Santini there seemed to be nothing unusual about the evening. The service was, as always, impeccable. The classic Venetian dishes were greeted by low murmurs of approval.

There was an air of pampered luxury, tranquillity reigned, and few noticed the powerfully-built men in dinner jackets who had placed themselves on either side of the restaurant doorway.

“He’s here,” one warned the restaurant owner, Gino Santini. “He’s here,” Santini told the maitre d’, who told the waiters behind him, who called across to other waiters fussing over four tables draped in stiff white linen. “He’s here,” murmured the efficient blonde-in-black into a mobile phone as she paced back and forth near the entrance.

Outside, the blinding flashes of paparazzi cameras lit up the interior of a dark blue Mercedes. Suddenly heads craned in the direction of the doorway. Forkfuls of pasta halted between plate and mouth. The buzz of conversation in various languages died. Who was “he”?

The answer stood framed in the doorway. “Good God,” someone whispered. Casually, like a man used to the stunned silences his appearances create, Francis Albert Sinatra strode through the foyer.

A nod to the left, a nod to the right. A hint of a smile for Signor Santini. Two or three times one hand was lifted in greeting; the other dabbed at his forehead with a handkerchief. Eyes straight ahead, ignoring the upturned faces of the diners, he walked towards his table, and as he slowly lowered himself into the chair being held for him, the diners burst into polite applause.

His wife Barbara, a chic, rather stately figure in black, followed. He, surprisingly younger-looking than his 76 years, wore a dark suit and white shirt, but no tie. A slow smile of contentment broke over his tanned face as a glass of Jack Daniels was placed in front of him.

Mr Sinatra was pleased. His concert, the first of six on a British visit, had been a success, and now he was settled in his favourite London restaurant. The Santini in Milan had been a favourite of his for 30 years, and since this one opened in London’s Belgravia in 1984 Sinatra had visited at least once a year, its owner murmured.

Mr and Mrs Sinatra had planned this evening for some time. Their guests were arriving, and now Barbara, in floor-length black skirt, moved among the tables greeting them, ushering them towards the presence of the legendary singer.

Michael and Shakira Caine arrived, followed by band leader John Dankworth and his wife Cleo Laine, the opening act of Sinatra’s London concerts. Louisa Moore was without Roger, so Frank asked her to sit beside him. Others followed: expensively groomed men accompanied by the glossiest of long-haired, mini-skirted women.

Fluted glasses filled with Ferrari, the sparkling white wine, were distributed by waiters to Sinatra’s guests: 45 of them. There was no menu. Signor Santini explained: “Mr Sinatra knows exactly what he wants when he comes to my restaurant. For years it has always been the same. He starts with mozzarella cheese with the Italian tomatoes I have specially flown in. Then tagliatelli with aubergines and olives, followed by veal milanese. No dessert – just coffee.

“Many celebrities come here, but I am always very discreet, very private: no publicity.” The Ristorante Santini is the haunt of visiting millionaires and politicians, and a favourite of Princess Margaret.

“I arranged a small dinner like this for the Princess last week,” Santini confided. “There is no fuss, as my waiters are used to the famous. Even so, there are VIPs and VIPs. But Mr Sinatra, well, I think he is the most important of them all.”

Nice Signor Santini has never seen his temper tantrums: “With me, Mr Sinatra is the most charming of men.” The waiting photographers and fans outside the restaurant saw a different Sinatra. As he left at 1.45am he snarled into the camera lights: “This is ridiculous – I can’t see a thing.”

Waiting fans were brushed aside with a curt “I don’t do autographs.”

One of his minders, trying to console the disappointed devotees, explained: “Look, he’s kinda fragile and old. Give the guy a break, huh?”

Meanwhile the polished, patient wife who had seen it all before looked on, amused. As the limo pulled away the man inside neither smiled nor waved. But then, where does it say legends have to be nice guys? 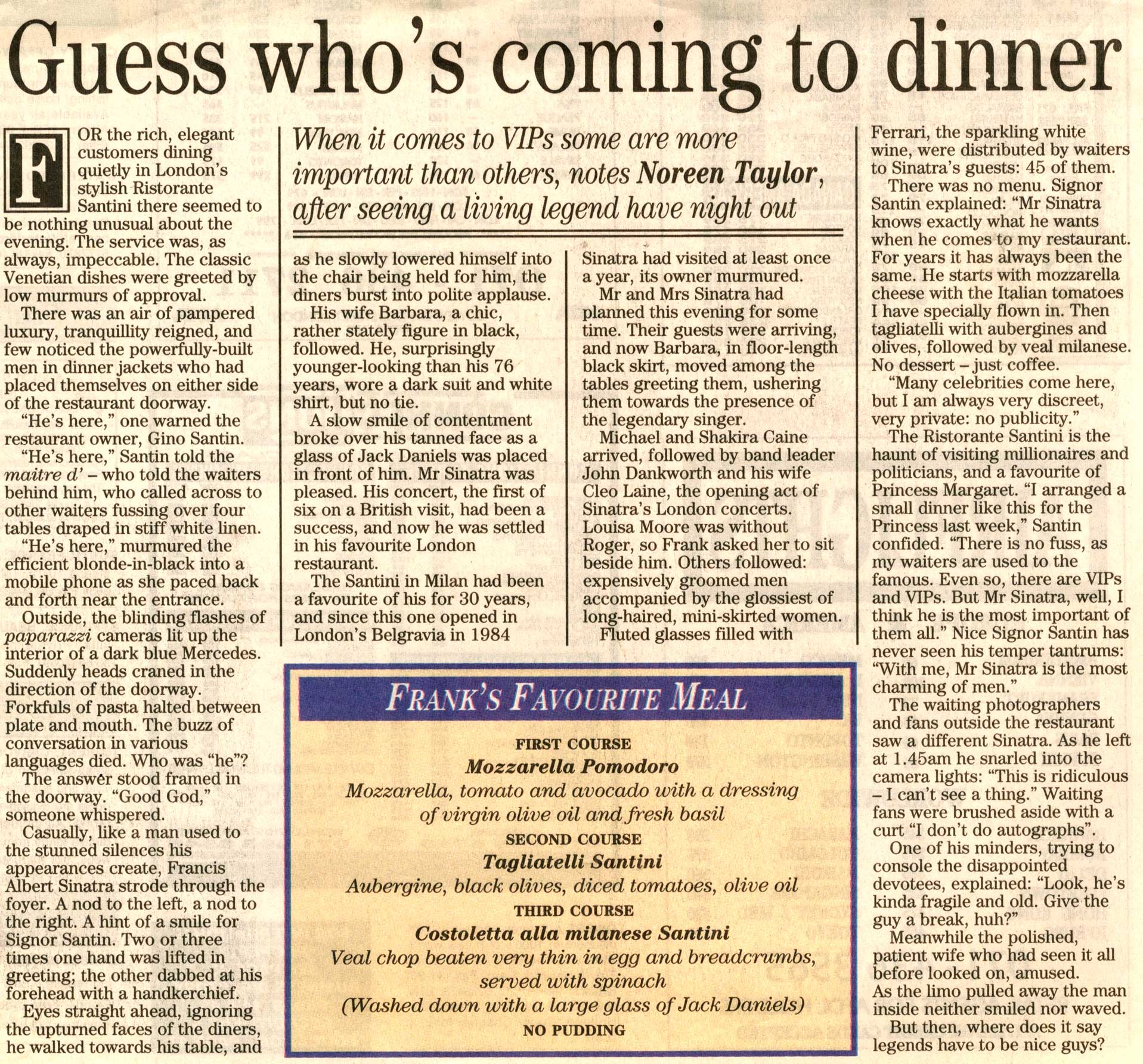