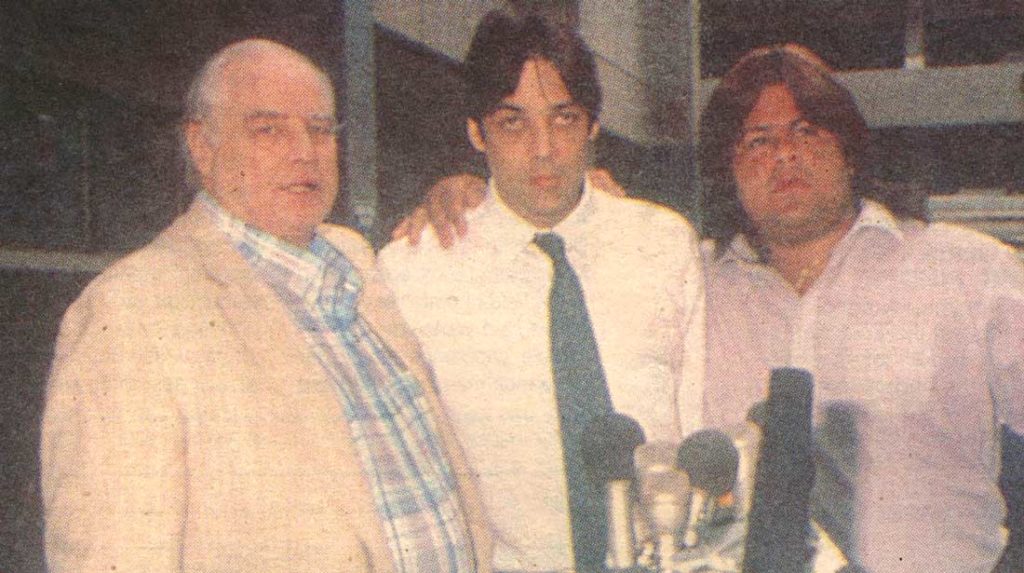 It was the greatest thing that had ever happened to Christian Brando. He was happy because he was about to be a father. At last, the tormented no-hoper who had always lived in the shadow of his famous father.

He told girlfriend Lisa Cavanaugh he had never been able to get his ex-wife Mary – their five-year marriage ended in 1986 amid allegations of brutality – or any of his other girlfriends pregnant.

He could hardly wait to tell his father Marlon the good news, and invited Lisa to meet him on his Hollywood estate. “Christian told me that Marlon had a number of unwritten house rules,” says the 28-year-old actress.

“He was never to go near his father if he had been using drugs. And there was a smoking ban inside the house and anywhere in the grounds. We drove on my bike to Marlon’s house, and as he came out to meet us Christian was already shouting, ‘Here she is, Pops. This is the one I’ve been telling you about.’”

Brando, who was wearing a kimono, asked Lisa at least four times whether she liked the house, as though he had to be assured of the visitor’s approval. When the three of them were seated inside, he began asking her about herself and the pregnancy.

Occasionally, she looked across at Christian, but Marlon said: “Don’t look at him, look at me when I’m asking the questions.”

Lisa says: “I got the feeling Marlon was embarrassed by Christian.”

Then Marlon asked: “Do you two box?” And he made boxing motions in the air with his fists. Lisa, realising he was referring to Christian’s violent relationships with ex-girlfriends, answered: “Not with me he doesn’t. If he did, I’d kill him.” 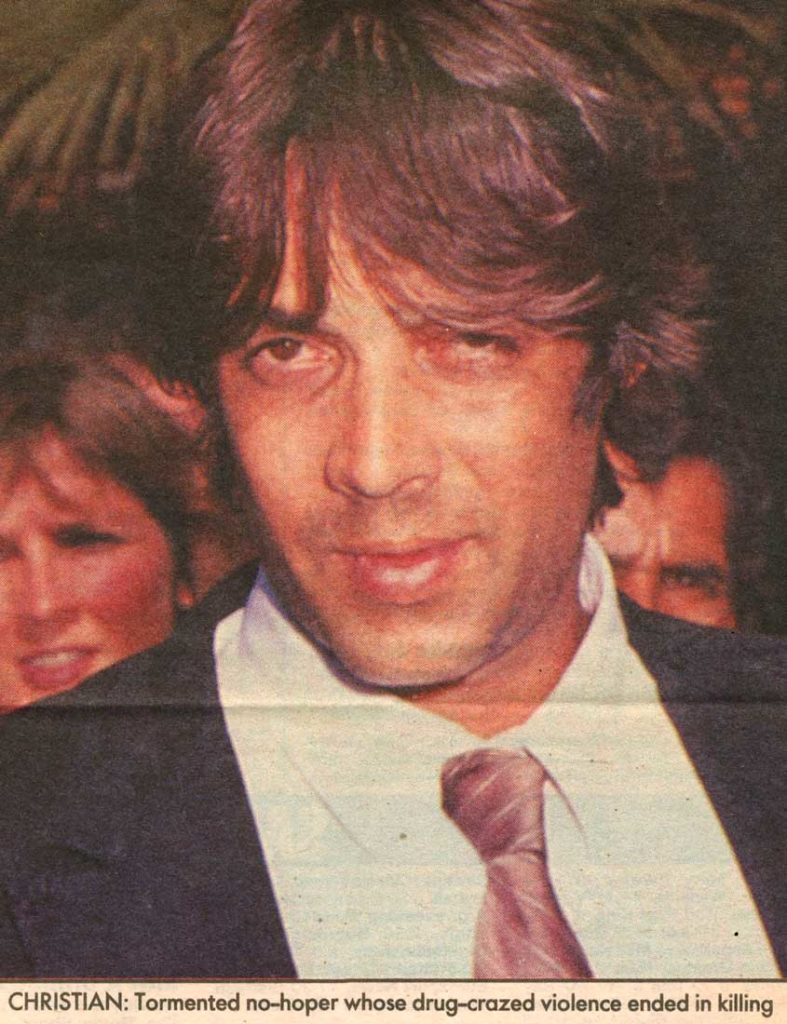 Marlon loved her response: “You’re just like me,” he laughed. “A tough one. I didn’t get where I am by being stupid, and you wouldn’t be sitting here next to me if you were.”

Then the star pointed to his son and said: “Look at him, he was a bag of bones when I got him. That’s what they handed to me after the custody trial, a 13-year-old bag of bones. Now, they tell me I have to let go of him, and that I have to keep picking him up every time he falls down? I’ve done everything I can for Christian. Everything.”

Lisa describes Brando as friendly, inquisitive, someone who laughed easily, but as she was sitting next to him on the sofa, another thought occurred. He fancied her.

“I could tell, and so could Christian” she says. “When Christian went to the bathroom Marlon told me he did not think of himself as a movie star.” He told the fledgling actress: “I consider myself as somebody who has made a lot of money.”

He asked Lisa to come to the house as often as she liked and extended an invitation to holiday on his Tahitian island. Lisa says: “Marlon seemed to be the only one around the house. He told us that his daughter, Cheyenne, her mother and boyfriend would be arriving from Tahiti for a visit. A visit that would shortly engulf the whole family in tragedy.

“Wasn’t she lovely?” smiled Marlon, pointing to a photograph of Cheyenne. “Her face is scarred now after a road accident so I’ve had to get her fixed up with a plastic surgeon.”

As they rode away Lisa felt Christian was depressed by the news of Cheyenne’s visit. There was sarcasm in his voice as he said: “So the little princess is coming. She’s a brat, a spoiled brat. But Dag shouldn’t have told Pops she was on mescalin” (a hallucinatory drug).

Christian said to Lisa: “You’d better watch out. Pops likes you – I mean, really likes you. He’s been with everyone, you know. They used to say he was a faggot. At least they can’t say that about me.”

A few days later, without any warning, the dark side of Christian emerged again. Lisa says: “We were in his truck and I’d spilled some hot coffee on my legs. It really burned. But instead of stopping to see if I was OK, Christian began sneering calling me fatso because I was pregnant.

“I slapped him on the face, then he hit me. As I got out of the truck, he said that if I slammed the door he would push my face through the windscreen.” Lisa was so enraged by his behaviour she slammed the truck door 25 times.

She says: “He froze for a while, surprised. I think he had never met a woman who had fought back. When he eventually got out, he pushed me to the ground and started hitting me. We ended up rolling around the street, hitting each other until he realised I was crying.

“That last month with him was a nightmare. I’m still haunted by memories of his craziness. He would scream at me, using the filthiest language, threaten me and our baby, and when I realised I was going to lose the baby, he refused to help or even pay for a doctor.

sober and clean from drugs. I reckon Christian must have spent a thousand dollars a week on cocaine.

“After I’d thrown him out and told him I never wanted to see him again, he rang me late one night. He was crying, softly, saying, ‘Lisa, I’m dying. I’m going insane. Please help me.’ I told him he was a drunk and a druggie and that he could only help himself by seeking professional help.

“I couldn’t hear his answer, so I asked him to speak up. I’ll never forget his words. He was repeating like a chant, ‘But it ain’t as though I’m hurting anyone. I’m not hurting anyone, Lisa.’ But then he did, and Dag Drollet was the victim

Five days later, Lisa visited Christian in jail. He had told the guards he wanted to see her, but when he came out he broke down, hid his face in his hands and went back to his cell. To Lisa’s surprise, other females claiming to be friends of Christian began to appear.

She says: “I was amazed at the parade – all tarted up like they were on their way to a premiere and announcing themselves as ‘the woman in his life.”

Lisa went into hiding. The publicity surrounding the case had unveiled a sleazy, tawdry life, and she says she wanted no part of it. As to why she became involved with Christian and stayed with him through the worst of his cocaine-fuelled paranoia, there is no straight answer.

Did she imagine that through Christian, Marlon Brando was going to help her career? “Absolutely not,” she swears. “Marlon would not even help his own get started, so why would he help me? In fact, Christian wanted to act, but he had this pathetic excuse, ‘I can’t join the actor’s union because somebody already has my name.’

“The truth was he could not hold down any job. He just lived off his father. Maybe he was even frightened of him. Christian once told me that during a fight with his father they had broken every piece of glass in the house.

“I think Marlon genuinely tried to help Christian, but he didn’t come to live with Marlon until he was 13, and by then it was too late. Christian had already been on the streets. As a child he used to ride his bike around Beverly Hills, selling incense sticks to make money”

Without alcohol and cocaine, it is just possible Christian could have made something of his life. He was curious, well-read, loved animals, the countryside and working with his hands.

There is a sculpture of a dinosaur over his mail box that he made during one of his calmer periods. He told people he had made it to protect him from the ghosts he believed in.

But of course there was no protection for him, nor for the other sons and daughters of Hollywood stars who exist in a haze of emotional pain that can be relieved only by drugs. Some of these children end up as suicide statistics. Others, hollow-eyed and forgotten, live courtesy of the discreet, highly-paid pusher. Now, Lisa wonders about the fate of Christian Brando, the man she once loved.

“I’ve heard that he is attending Alcoholics Anonymous meetings. That is great news. I don’t think Christian will cope with prison. His only hope is that he’ll be confined to a psychiatric clinic for at least three years. It will take at least that long to unravel the mess.” 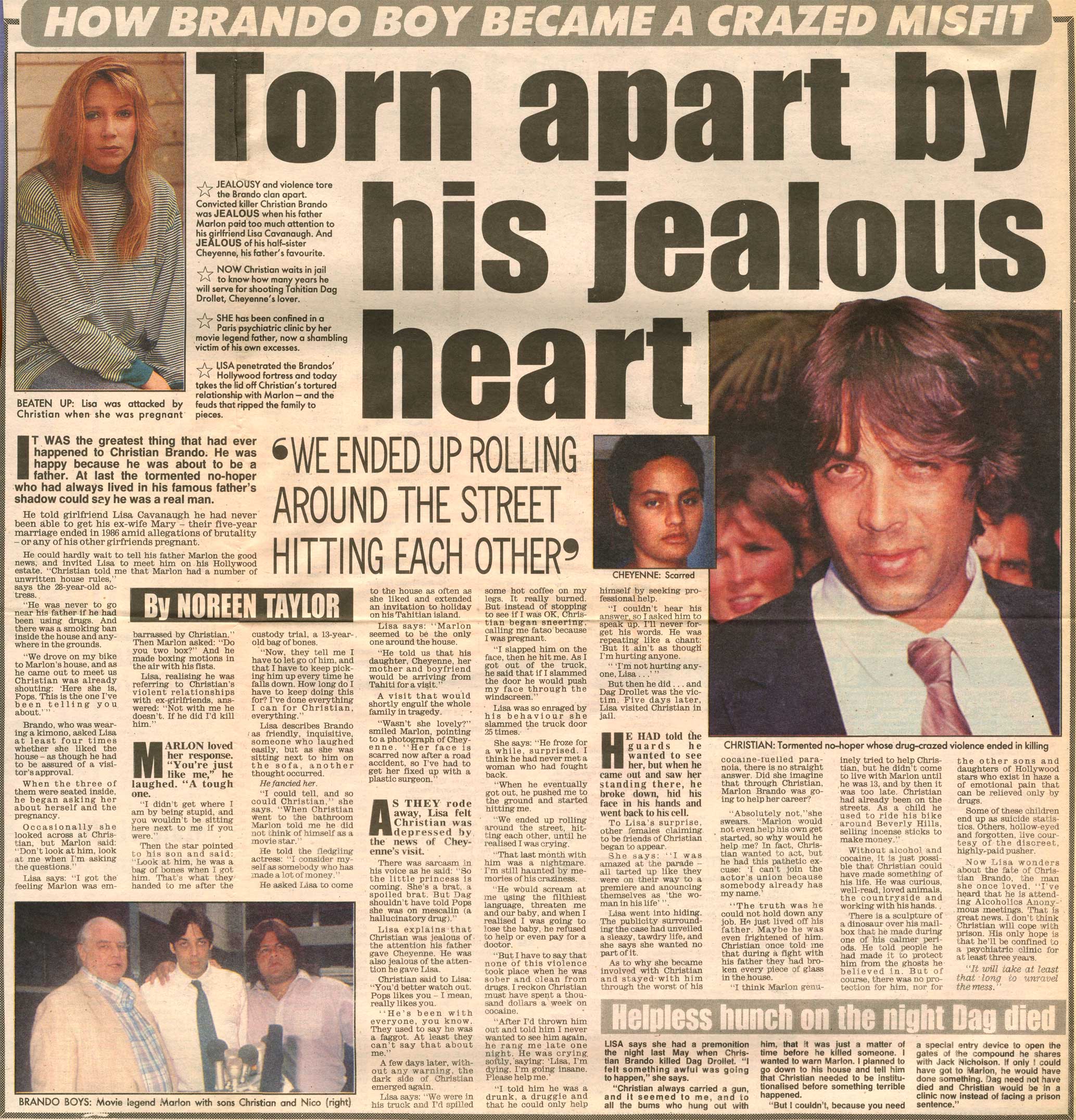