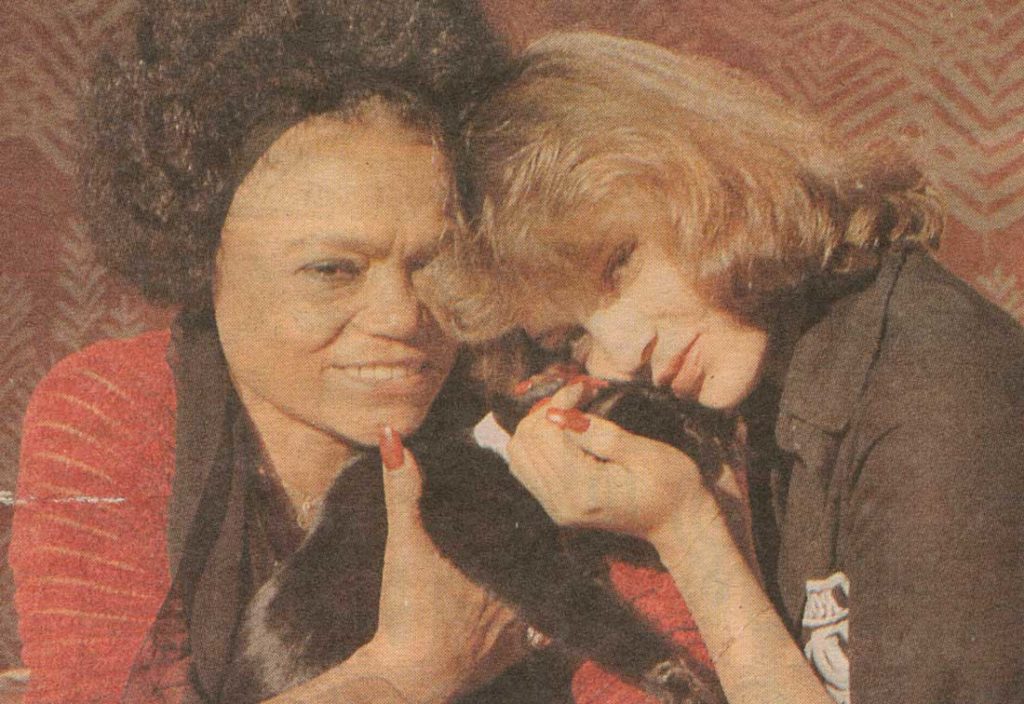 Eartha Kitt sat amid the bouquets of orchids in her dressing room in London’s Shaftesbury Theatre… and cried. She cried for herself. She cried from the certainty that she will never escape the deep emotional pain that has been with her since childhood.

And nothing, it seems, will make that pain go away. Not the success of this one-woman show, in which she is seducing generations who were in their nappies when she was dripping diamante. Not even the satisfaction of knowing that she is one of a handful of world-class performers one of those gifted people who for three decades has driven audiences into frenzied yells of: “More, Eartha… more.”

She has been called the most exciting woman in the world, but she is also one of the saddest. “Don’t feel sorry for me,” she warns, her large dark eyes closing to slits. “Showing my weak side like this makes me feel guilty. I went around to the front of the theatre earlier and I am looking at my name on the front – my big photographs plastered everywhere. And I am thinking, that’s not little lost Eartha Mae – the child nobody wanted.

“That’s Eartha, the performer everybody wants a piece of. You see, inside I am still little Eartha Mae, the child her mother gave away. Think about that. You’re such bad news even your own mother gets rid of you.”

Eartha was born 60-odd years ago in South Carolina, on a cotton field plantation. Her beautiful 14-year black mother was raped by the

white plantation owner’s son and she was brought up by a series of dirt poor relations.

“I wasn’t black, I wasn’t white. I was always told you are nothing. I did not belong anywhere. I had to fight dogs for scraps of food. Even now, I feel I don’t deserve to eat. Sometimes I go for two days until a headache reminds me it’s time to eat.”

Eartha was beaten, starved and sent out to labour in cotton fields when she was five. She ran away from home, religion, schools, men, until one day 15-year-old Eartha was spotted dancing in the streets and asked to join a touring dance troupe.

International acclaim as a dancer, actress and singer followed, but never happiness. Eartha had a lot in common with her friend, Marilyn Monroe. “Marilyn used phone me in the small hours of the morning because she was fighting the same feelings as me,” she says.

“Both of us were orphans. Both of us suffered from that terrible nameless fear that haunts you when normal people are sleeping.

“Like me, she knew success. She knew what it was like to be an idol – but what does that mean when deep down you know you were not important enough for your own mother to want you?”

She adds: “Somehow, I had the strength to fight my demons. Poor Marilyn, she just ran out of strength. So I could not help her through her loneliness. She was a lost spirit already. I am proud of myself in a way, proud that I made it alone without a husband to boss me around.”

Try to suggest that the right man might have helped and she almost spits the word at you. “Men? What do I want them for? Only men I knew abused me, used me. Last boyfriend I had robbed me of $35,000. I used to go out with those white old money guys, but their mothers always hated me. Thought I’d contaminate the blood.”

She was married for two years to property millionaire Bill McDonald. From that marriage came the most important person in Eartha’s life, her daughter Kitt McDonald, now 26. “My baby,” she sighs, shaking her head as, once again her eyes fill with tears… My baby. Worst day of my life was one-and-a-half years ago when she married. I still haven’t got over that hurt.

“My daughter was giving me away, just like my mother gave me away all those years ago. That wedding cost me a fortune. I paid a fortune to lose my own daughter. Can you believe that? Part of the Jewish ceremony involved smashing a glass. When it shattered, so did my heart.”

She dried the tears from her face and went on. “I have never been able to talk about those feelings to my daughter. She will have to read about them. Thank God that shortly after the wedding I had to come to London for Follies. That’s what kept me from breaking down completely. Now I have no one take care of me. My audience is the only family I can trust.”

Although the dressing room walls are hung with photographs of Eartha’s beautiful daughter, there is no evidence of her son-in-law.

“He’ll have to earn my friendship baby, and that’s not going to be easy.” Scarred women are never easy. Those brutal beginnings have left Eartha with eyes like a guard dog, short-tempered impatience and a distaste for compromises.

President Johnson became her enemy when she spoke out against Vietnam during a White House luncheon. A dossier compiled by the CIA resulted in Eartha not working in America for 11 years.    “Nowadays my home is in Connecticut. I like being here in London,” she says. “The English know how to laugh at themselves, Americans, unless they are Jewish, have no sense of irony.” The onstage Eartha Kitt is a sequinned, slithering fantasy. Off stage, the tight, exercised body is in a red jogging suit with hair and eyes masked in scarf and glasses. She walks with weights on her arms and legs.

“I never think anyone is going to recognise me when I am walking like this.  But your truck drivers do! They are always shouting, ‘Hello Eartha’. What do you mean, what do I do? I wave back of course. One day I might need a job alongside them.” She was not smiling. She almost meant it. 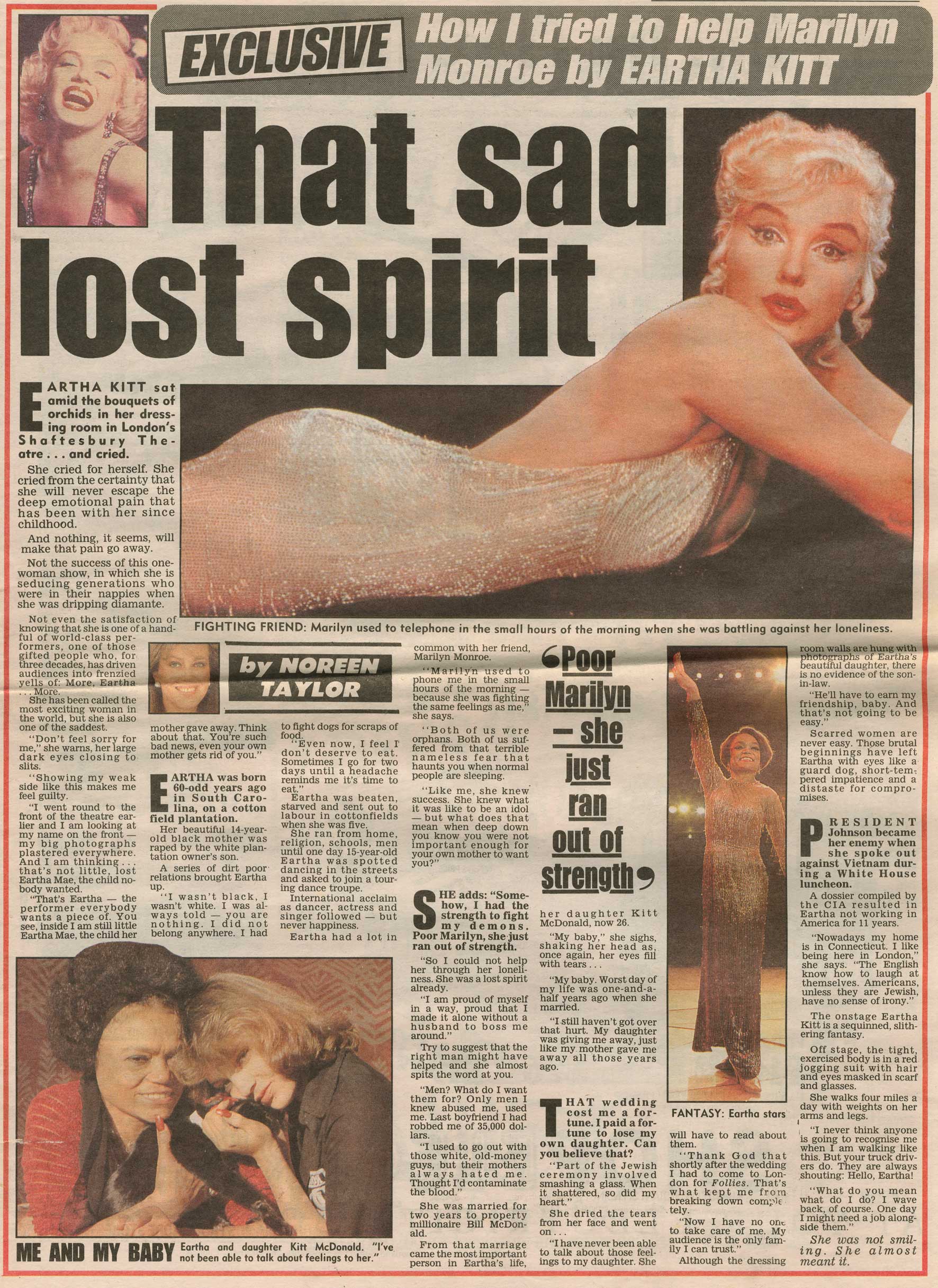