I had affairs to compete with Bowie

Interview with Angie Bowie, published in the Daily Mirror, March 1986

Angie Bowie had her first shot of fame when she became David Bowie’s wife—and she’s been hooked on it ever since. But the glamour of living in the superstar’s reflected glory soon palled.
“Before we married we promised, each other we’d work on his career first. Then, when that got off the ground, we’d concentrate on mine. I expected the same support from him that he got from me, only it wasn’t forthcoming.
“All he wanted was for me to sit at home waiting for him. I sat home all right, but I made sure I wasn’t pining for David. I was lonely, jealous… so I had affairs to compete with his. My dinner parties were packed with people like Ronnie Woods, Brian Ferry and Ryan O’Neal.”
Meanwhile, Bowie had his friendship with Mick Jagger. A friendship so intimate that Angie giggles: “Those two have been lucky. They’ve always had their male mafia to protect them from publicity. But so what… lots of people are bisexual.”
Born in Cyprus, the daughter of an American colonel, Angie was attending a Surrey polytechnic when she met Bowie. She claims it was her long, slim, boyish body that attracted him in the first place.
“I was into women. 1 wore three-piece suits. And I made sure he knew i it. I didn’t want him to treat me like a girl – I was his equal, his mate. The most inconvenient thing that happened to us was falling in love.”
So how does she explain them making love the first night they met and then Angie throwing herself downstairs afterwards because he refused to stay? “But’s that’s exactly it,” she says. “That was my cranky drag queen act, my if-you-leave-me-I’ll-kill-myself number.
“David knew that trick. That’s why he stepped over me and said coolly – careful love, there’s another flight, you might hurt yourself.“
As she talks of the past a gaiety returns, eclipsing the hardness of today’s Angie Bowie. Despite Bowie’s £480.000 settlement she is hard up at the moment. “Of course I’m broke. I’m trying to get a career off the ground. Do you know how much it costs to produce a video and an album and keep two people in an office to look after your affairs?”
The office she speaks of is a friend’s flat. There is no secretary, no copier, only one old typewriter. And singers do not usually have to invest their own money in making an album. Record companies invest in talent.
“David’s settlement is enough for me to live on comfortably. However, it’s not enough to manage a company. David got off lightly in the divorce court, mostly through the goodness of my heart. I could have been the sort of wife who did nothing but spend his money.
“But I was the one who looked after road crews, took care of publicity, bawled out the record company and generally made sure David’s life was running smoothly so he could concentrate on the creative side. Now I’m persona non grata,“ she sighs bitterly. People who worked for David weren’t popular if they talked to me.
“Crazy isn’t it,“ she says in a little girl voice. “Such a small person to be so maligned. Maybe I’ve got some hidden time-bomb on me that only David and Corrine know about.”
At the mention of Bowie’s lover, Angie’s jaw muscles go into overdrive. “Fight Corrine for David! No way. I’m the lady killer. I’m the one who does the dumping. I’m the one who says goodbye baby, I’ll call you.
“And anyone dismisses me as another dumped rock star wife is a *****. Because I’m the one who’s fighting her way to success this time.” As her front door closes for the night, Angie Bowie is still shadow boxing. 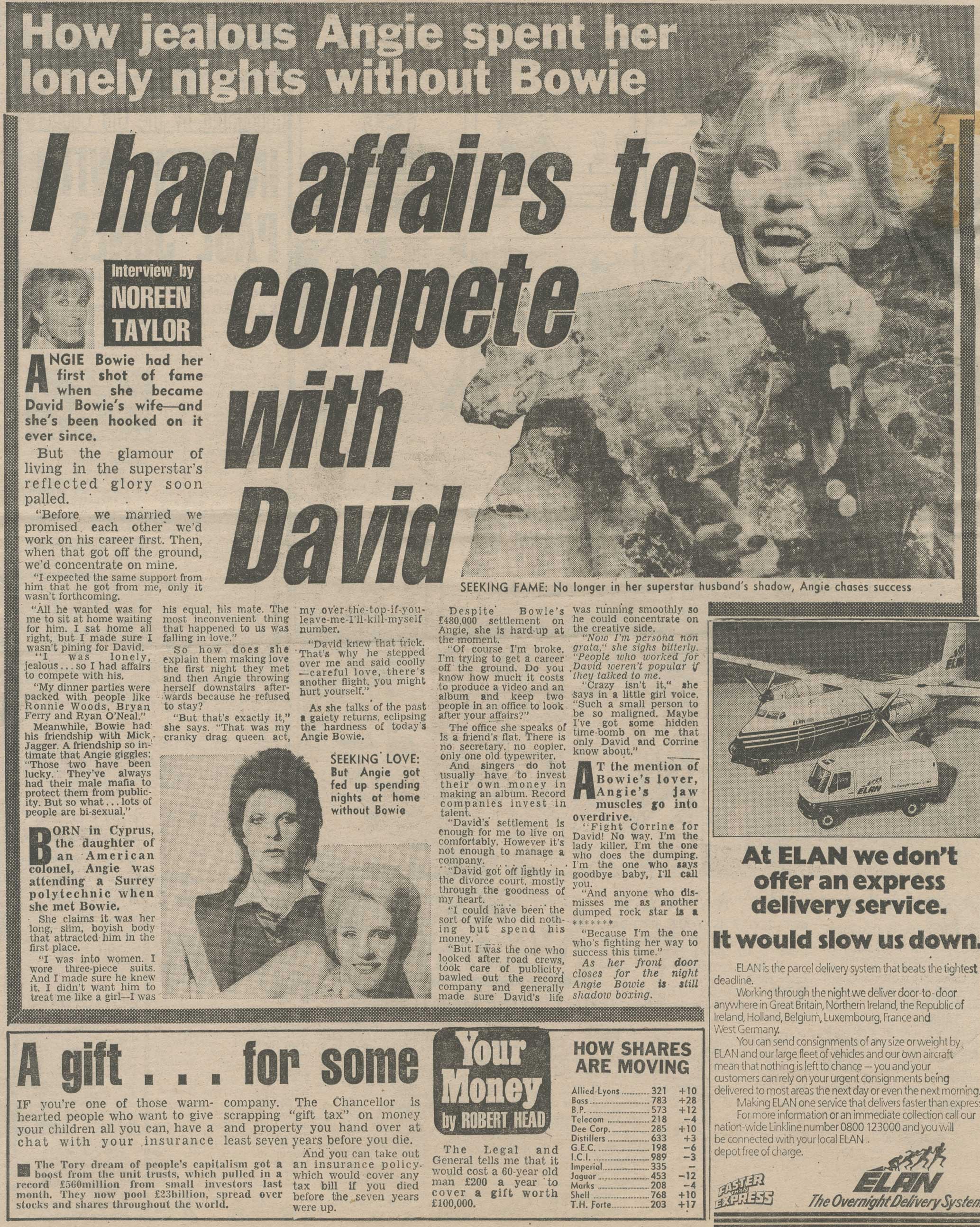