I know I can – Arianna Huffington 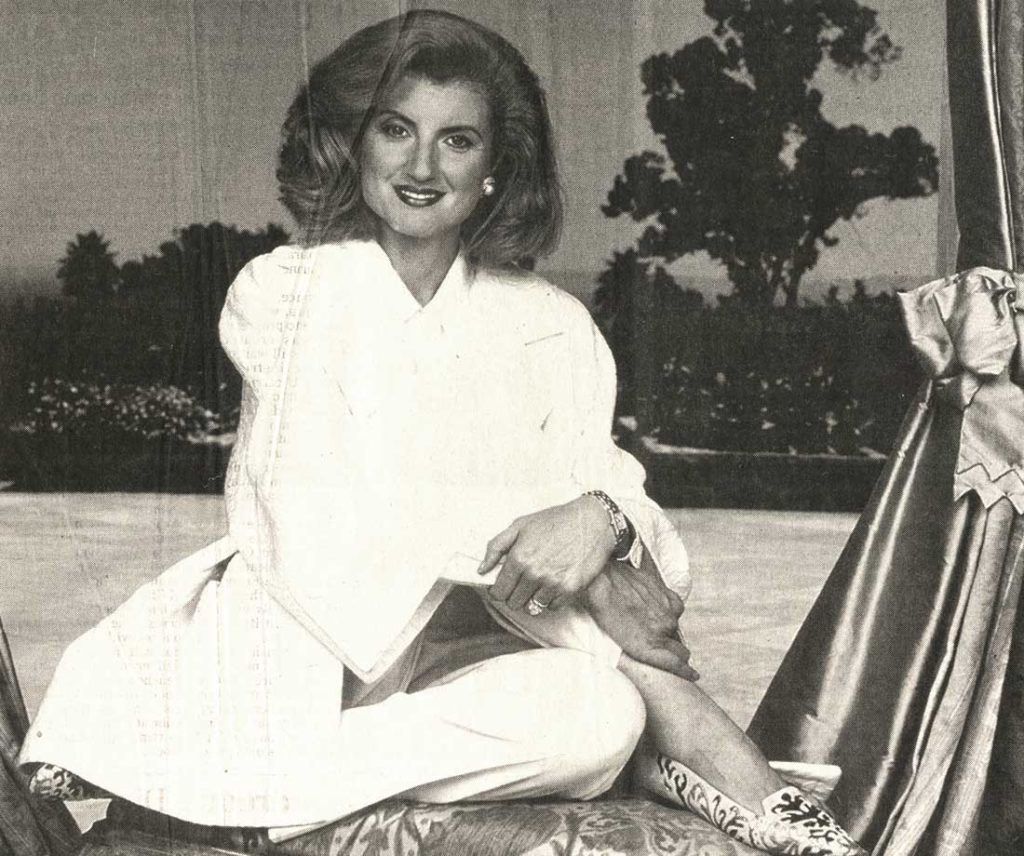 “Arianna?” One of Washington’s political hostesses laughed. “She is a preposterous figure here, a laughing stock. I cannot believe you have come all this way to interview her about that book The Fourth Instinct. It went practically unnoticed in America.”

It wasn’t easy reciting this to Arianna Stassinopoulos Huffington, yet she continued to smile, to sip the darjeeling tea she had ordered at the

Four Seasons Hotel in Washington. “While our house here in Washington was being decorated, we lived here, my husband and my two daughters. My children loved it. In fact, my youngest daughter wanted to come along today, but at three and a half she’s too young. Now do you mind if I put my tape recorder here on table?”

Arianna is too sophisticated to make it seem as though she has changed the subject. What she does is to introduce a topic that might distract the questioner. She is aware of the furore unleashed by what is perceived as her dream to build a powerbase should her husband win a seat in the US Senate

For the moment that dream has been thwarted. Michael Huffington, a first term Congressman lost his bid in the Californian Senate race last November. Nevertheless, the furore surrounding Arianna continues. There is not much to differentiate her from any of the ladies who lunch. She seems soft of voice and smile, with eyes that beam an uncomplicated warmth. She is 44 and groomed to within an inch of her life, but only the pale lemon, diamond engagement ring speaks of riches.

The Huffingtons spent $28 million on his Senate campaign last year and may do it all over again as soon as another seat is up for grabs.

When you ask Arianna about God, about restoring spiritual values, of replacing welfare with hands-on charity and personal commitment – she reminds me this the message of her book, a homily on Christian

do-gooding that, she says describes her values and motivations.

Arianna arrived at Girton College, Cambridge, from Greece in 1969 to read economics and two years later was elected President of the Union. Then, as now, the constant figures by her side were her mother, Elli, and her younger sister Agapi.

In 1973, she wrote the first kick-back book against feminism, The Female Woman, became a talk-show fixture, and talked about when her affair with Bernard Levin began.Sunday Telegraphcolumnist Christopher Booker also fell in love with Arianna and remembers her as “most impressive, remarkably intelligent.”

He was puzzled when she became involved with the Californian self-discovery group, Insight. “I went to an Insight meeting at her flat and left feeling that whatever the group was up to, it wasn’t on the side of light.” Booker said: “It seemed to me to be a semi-secret society attempting to exert influence through people with money.”

Equally puzzling must have been Arianna’s ordination as a minister of the Church of the Movement of Spiritual Inner Awareness about 15 years ago. John-Roger, the founder of MISIA, considers himself God’s chosen representative on Earth, a phenomenon, that materialises every 25,000 years. Between 1990 and 1993, Arianna contributed $35,000 to one of John-Roger’s foundations.

Her London publishers pleaded with me: “Please don’t mention John-Roger. Promise. She is so angry at the press. There has been a lot of slander circulated.” Angry! The serene, radiant, coiffed creature opposite me?

Some who knew the London Arianna talk of a woman whose pores practically ran with the sweat of ambition. Both of her biographies, on Picasso and Callas, were best sellers. Yet Arianna’s ambitions needed a wider arena. America. “Everyone thinks that I planned my life back in Greece but I never plan anything. I have never even consulted an astrology chart. I have a deep trust in God”

In 1986, she married Michael Huffington. She was then 35, and it had been a long wait before her prince had come, especially one so tall and rich. On their first date, when the oil heir asked her what was the most important thing in her life, Arianna answered: “God.”

It was, she tells me, said with “lightness and humour,” but she insists that she could not have fallen in love with an atheist or a Marxist.

“Waking up next to a man you know is wrong would be hard. Falling in love is not only about looking into each other’s eyes, it’s also about looking in the same direction.”

Huffington has been described as someone who would make as excellent counter-assistant at McDonald’s. Arianni is painted as a cunning, ambitious woman who married a not terribly bright man who could someday buy his way into the Senate, if not the White House.

Arianna hands remain relaxed on her lap as I relay this. “I didn’t marry until I was 35, so I already had made my own life and work. I do make my own money and I could support myself on what I am making now. The fact that I married Michael is another issue. Quite simply, my husband wanted to run for office and naturally I became involved in his campaign. Also, we fell in love. Does no one take that into account? There have been so many slanders but I just breathe them out; I retain nothing that is negative.”

She adds: “My husband might decide to run again, but meanwhile I believe that what we can achieve outside politics is just as powerful, just as important. America is in crisis. Children are having  children. Children are killing children. The present system is not working and now for me this is a life’s work.”

Arianna’s ideological partner is Newt Gingrich, Speaker of the House of Representatives. “Newt Gingrich has the ability to change this country not only legislatively but also emotionally. He wants to revive the major institutions like the family, the Church and the volunteer spirit. Welfare has created an underclass and only succeeded in destroying lives. We pay taxes and turn our heads away saying, ‘Let the government do the work.’ Instead, we have to reach out, reconnect with God and help others. Yes, hands on, down there with the addicts, the homeless and the unemployed.”

The Washington Postjournalist, Sally Quinn is not the only one who doubts Arianna’s commitment to such causes. She says: “The stories about her involvement with charities where she shows up every two years with a television team make a mockery out of her claim to be a volunteer.”

Arianna says: “I am the director of the Centre for a New American Compassion, which is exploring ways of providing alternatives to welfare. My husband is also helping by networking businessmen.”

There it is, the fixed soothing smile.

Another book, What did you do in the revolution Mommy? is almost completed. It is, apparently, another homily on where American values have gone wrong. She is also working on a proposed television show, Beat thePressin which she a propose she plans to investigate reporters and their “motivations.” There is no humour in her eyes now.

Still, we have not spoken of John-Roger or MISIA. For the first time I sense unease. “People have ascribed things to me about cults that are a total fabrication. Sure, at one time I went to India and I took lots of seminars, but that was explorations for the day I knew I would write The Fourth Instinct.

“Mv life,” she says firmly “is in the book. And actually I didn’t ask the publisher not to mention John-Roger. I simply told them 1 had nothing new to say on the matter. Why should I waste my time rehashing old press clippings, old inaccuracies?”

I remember how another biographer has described Arianna as a woman who never got angry. And somehow that was for want of a better word, creepy. In the end, you have to ask whether this woman and her rich, but not terribly bright, husband mean anything in in the grand political scheme of things.

They fuel gossip, certainly. They provide much mirth among liberal Washington insiders. Arianna’s agenda remains unclear. With Huffington’s funding and Gingrich’s support, who knows what is possible? 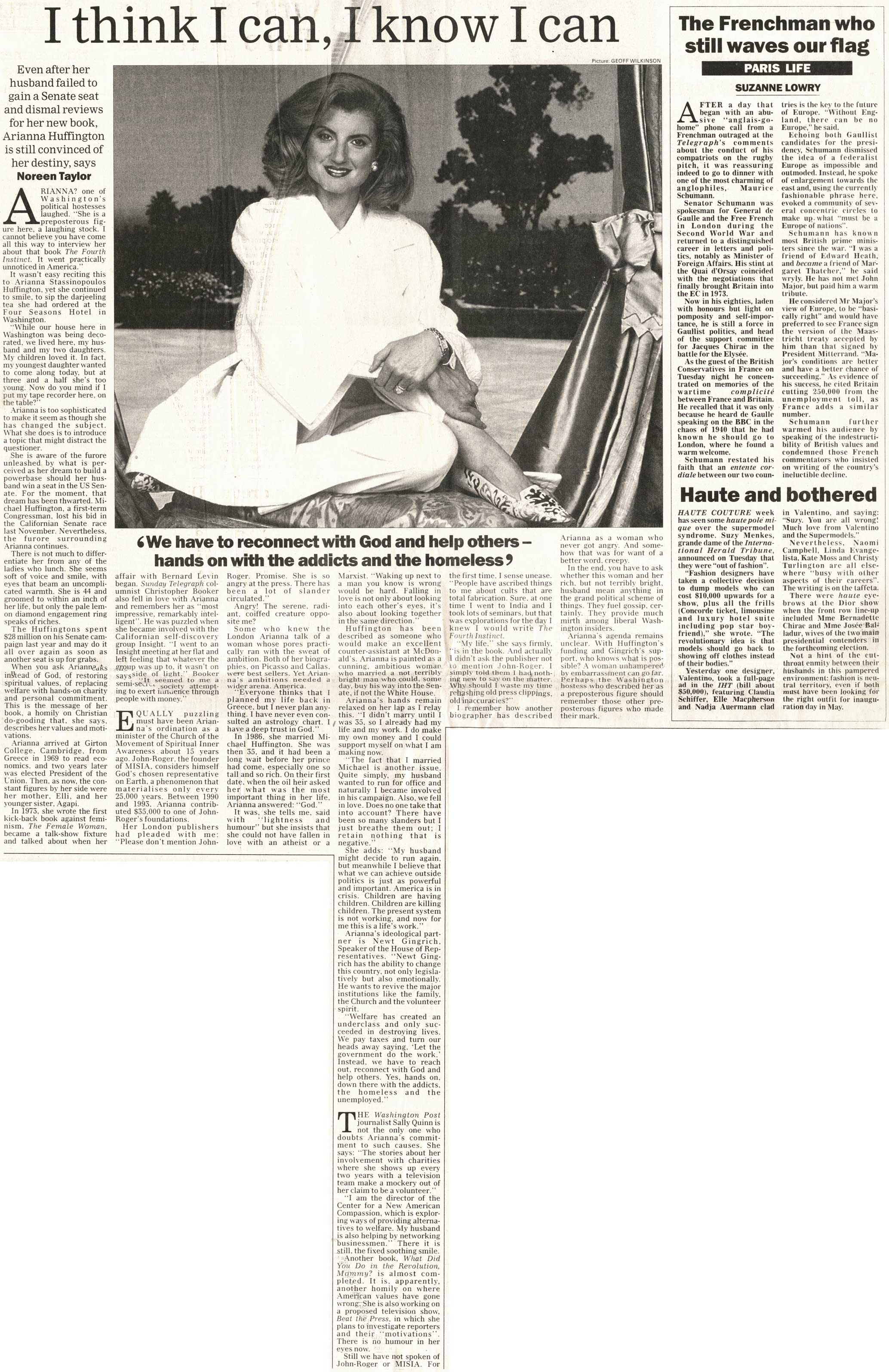