I try not to let the depression torture me – Kenneth Branagh 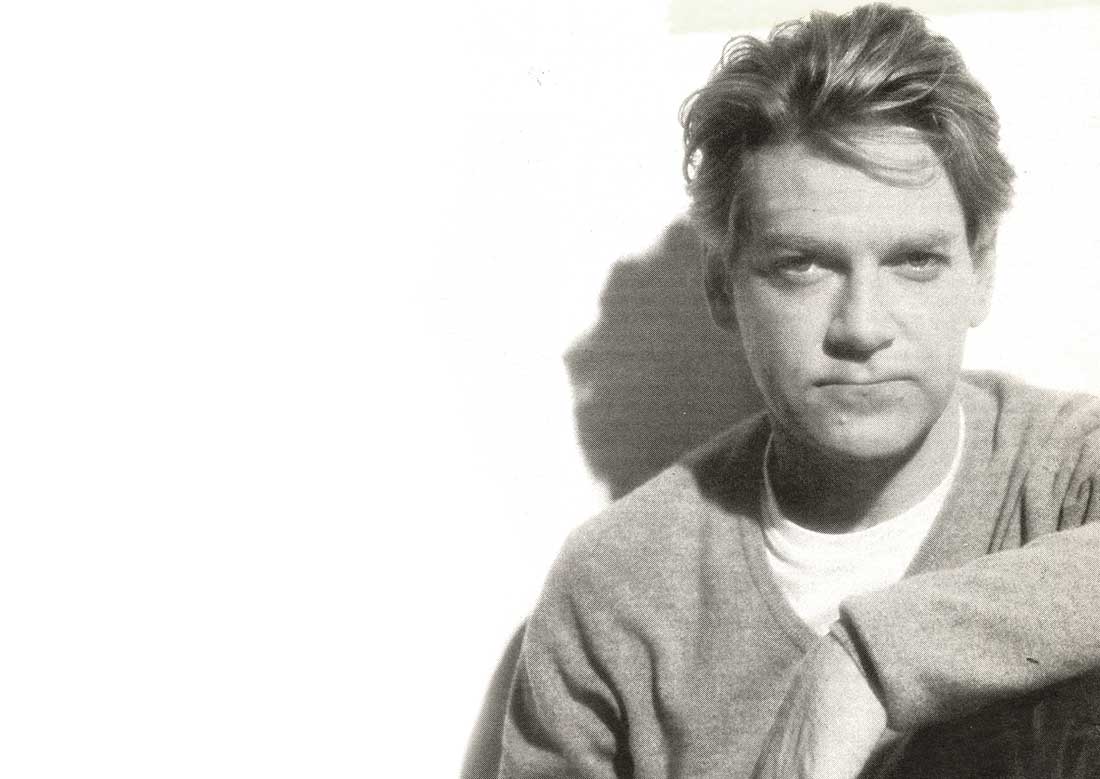 Doubtless the begrudgers will be sharpening their teeth when they realise that Mr Clever Clogs has gone and done it again. Yes, Kenneth Branagh has adapted yet another Shakespeare play for the cinema. Not only adapted, but co-produced, directed, sung, danced and starred in it.

The foremost modern interpreter of Shakespeare has transformed

Love’s Labour’s Lostinto a Thirties musical extravaganza set against the backdrop of the Second World War. Capturing some of the most

memorable scenes from Hollywood’s heyday — with dashes of Fred and Ginger, Busby Berkeley and Casablanca, all linked with Pathé News pastiches — he has come up with something rather special.

Once again, in this, his fourth Shakespeare movie adaptation, he has made his hero’s work accessible to a contemporary audience. Yet Branagh, off stage, off camera, remains as inaccessible as ever. He has been an important player for a long time, and it shows. During the Dorchester Hotel publicity junket for the film, it is clear that the former eager-to-please persona that once greeted press questions has been supplanted by veils of seen-it-all weariness, even wariness.

Who can blame him? The tides of adulation that initially greeted the boy genius waned long ago. Well before he made it clear he would never talk about his former wife, Emma Thompson, or their divorce — not to mention the end of his affair with Helena Bonham Carter — came the first drips of bitchiness. They rapidly became a flood as the press’s green-eyed chorus boys and girls snooped and sniped.

Our Ken, they decided, was too precious, too ambitious, too much the luvvie of newspaper fantasy. Who did he think he was, writing his biography when still in his twenties? Yet those who have worked

with him — actors, singers, musicians — tell a very different story. They drool about how fabulously helpful and funny he is to work with, not in the least uppity or temperamental. (Here, I had better declare an interest. Among his fans, and starring in Love’s Labour’s Lost, is my daughter, Natascha McElhone. Since that fact didn’t seem to influence the way Branagh treated me, I haven’t let it affect me either).

In the business, he has many defenders. One of the musicians who worked with him on Hamletonce asked me, genuinely baffled, what it was about Branagh that made the media want to knock him down. His voice rising, he said: “This guy brings us work, revitalises Shakespeare, makes stuff happen! How bad can that be?”

Branagh smiles at the anecdote, saying that his friends worry more than him about the criticism. “On my behalf, they are more sensitive than me. Fortunately, there have been many champions of my work. I

tend not to get caught up in theorising, but I’d be dishonest if I told you some of it didn’t hurt. Maybe it’s the price you pay for being successful. Anyway, rude, cruel words have a transient impact since, on the whole, I feel so blessed.”

It is possible, of course, that he isn’t entirely blameless. He can seem rather remote, and it is noticeable that the man patiently dealing with my questions seems altogether a more closed, cold creature than the warm, smiling one I bump into later in the company of pals such as Timothy Spall, another Love’s Labour star.

Is one an act and the other real? Are they both acts? “Close friends describe me as a loner,” he says. “But I’m never lonely. I’m pretty much at ease in my own company.” On a hunch, I ask if he is a depressive. Without demurring for a second, he confesses:

“Sure, big-time. It’s hard to get out of. Deep, deep, deep and wide-ranging. Hamlet sums up clinical depression, which is possibly why I’m obsessed with the play. There is no sense to it either. It doesn’t seem to be connected with work, or events in your life. You just wake up one morning and everything is grey. Nothing makes sense. Reality is tilted downwards.”

And no, success does not help or alter anything either. “So many people I know are prone to it. I try not to let it torture me. The only way out, I’ve found, is to get up and exercise. Getting the old endorphins busy seems to help. Hopefully, it has gone away for a while. I certainly haven’t had it since working on Love’s Labour’s

Lost.I rarely admit or talk about it.”

A pause. Then he suddenly snaps out of his moment of self-reflection: “Why should I bother, with all the blessings in my life.” This suggestion that good fortune rather than talent has guided him to the top is endearing. Mere luck and ambition on their own couldn’t have ignited the interest of Shakespearean veterans such as Judi Dench and Derek Jacobi in a 25-year-old actor.

“With me it’s always been a matter of, having to, rather than wanting to. Anyway, it’s passion that drives, isn’t it? Going for what you dream of, for what you want.”

Rather than follow vogues, he has had the confidence to follow whatever fantasies make his heart soar, to put his dreams on screen. They, in turn, have propelled him from working class Belfast to where he currently stands, straddling the heady heights of Hollywood and classical theatre.

As a little boy, his first experience of that other world so removed from his own was watching Morecambe and Wise on TV and then peering into the back of the set trying to discover where they had gone.

He soon discovered the route. Six weeks after leaving RADA he was starring on the West End stage in Another Country. Six years later the wunderkind was directing and starring in the award-winning Henry V.

While still in his mid-twenties, he founded the Renaissance Theatre Company, where he began to recruit some of the theatres great classical actors to join him. “Getting up the courage to make those telephone calls was terrifying,” he says. “Of course, I was shy, and that kind of terror never leaves you, but I’m a great believer in taking the baby steps first. Telling people how frightened you are helps to control the fear, no matter how raging. Innocence helps too. It’s only recently struck me how reckless, how youthfully optimistic I was.

“I’d think, why not? They can only turn me down. Those are qualities I’d like to hold on to, that ability to be trustful, naive. I’m still awed by talent, star-struck by people like Robert Altman and Woody Allen.”

Branagh recalls his childhood in Belfast as a time when he had a great sense of place and belonging. “I feel Irish. I don’t think you can take Belfast out of the boy. I came from the kind of street where everyone knew everyone else. Surrounded by dozens of cousins and friends, it was like living with a large extended family. Maybe that’s why I was drawn to the theatre, as another way of belonging to a large family. Then we had to leave Belfast and maybe that’s what sowed the seeds of discord.”

Hence the flowering of creativity. His father, a Protestant, worked as a joiner and although the family lived in a predominately Protestant street, they lived peacefully with their few Roman Catholic neighbours. Then came a night of terror during which Protestant mobs began burning Catholics out of their houses. Shortly after, the Branaghs and their three children left for Reading in England.

“I was nine and I remember quickly adopting an English accent for school, while keeping the Irish one for home. Being Irish, I’d always had this love of words, although I hadn’t a clue how to become an actor. Working class families tend not to be too in touch with such worlds. It was a teacher in the sixth form who told me, after I’d joined the drama society, that I had something and suggested I might try for drama school.”

A grant from Berkshire County Council provided the opportunity his parents could not afford. Not surprisingly, they were concerned about their younger son’s career choice. Having tried hard to imprint the philosophy of not rising above one’s station, here was this dreamy, book-obsessed boy with dreams of acting in and directing Shakespeare. How unlike their elder boy, Bill, who had done the sensible thing and joined the telecom industry.

“They used to come along and watch me in plays and say they enjoyed it, but they wouldn’t know. My parents are the reason I wanted to make Shakespeare available to ordinary people. But they didn’t try to dissuade me. I think they realised how futile any opposition would be when they saw my determination. Their chief concerns were that this was an area where they could be of no assistance and that maybe I would change.

“I’d been acting for five years when my father asked a friend of mine, ‘Do you think he has a chance?’” You might imagine that, since he thrives on his close-knit families, the theatrical one as well as the Belfast tribe, he would miss not being part of a couple any longer.

After all, he is 40-year-old bachelor. Does he ever wonder what it would be like to have a child? “Of course, I do. I’d love to have a child,” he says, and is rescued from the need to elucidate when an aide interrupts to inform him that Harvey Weinstein, the head of

Miramax and therefore the Hollywood money behind Love’s Labour, is due to call shortly.

Branagh, about to put on his producer hat, wants to end our conversation on his terms, on an up note. “I’m comfortable with life as it is now.” The tone is friendly but brisk and you almost long for him to relax, to reveal the stimulating, generous man with the Pied Piper quality that attracts so much talent to his side. Sadly, Branagh chooses to bring the curtain down, allowing only those in his own circle to enjoy his charismatic spell. 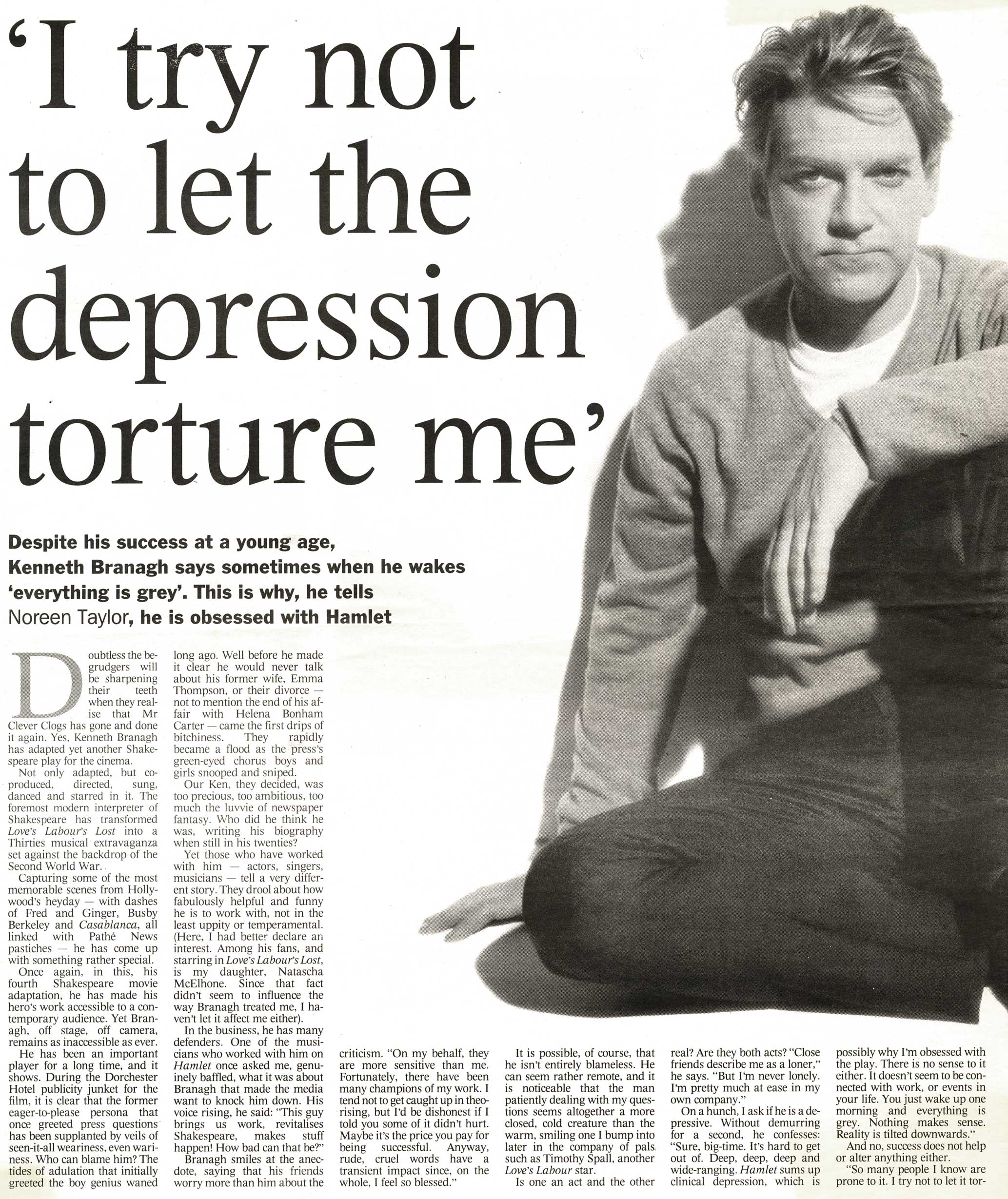