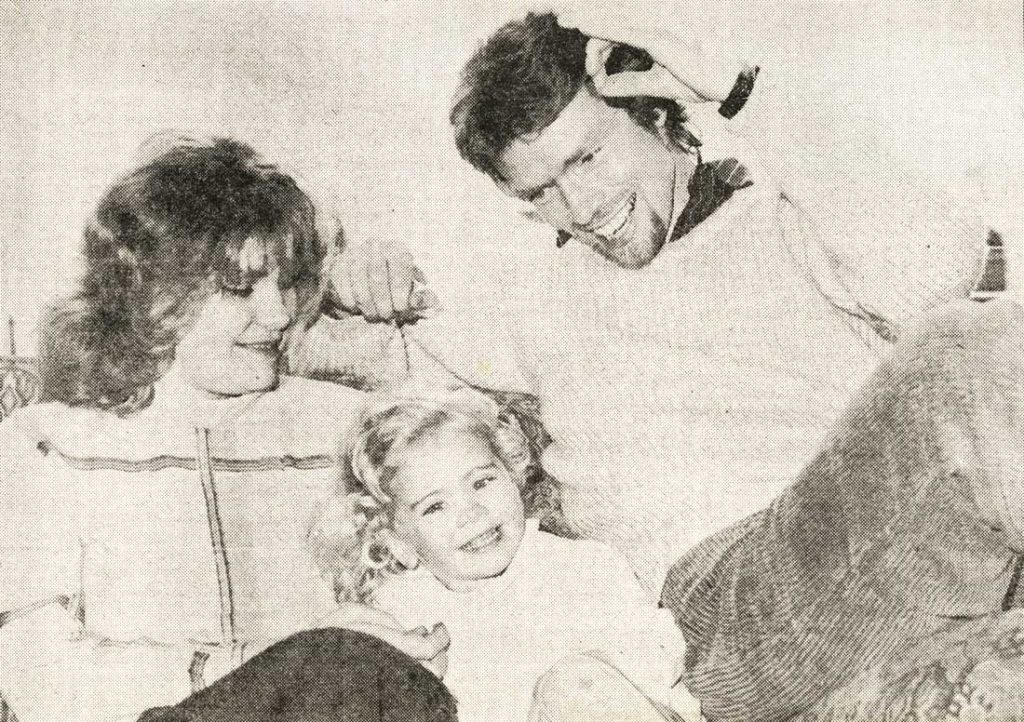 He has the aura of a time when people flopped around on cushions, smoking pot and calling each other “man.” So, naturally, Richard Branson lives on a houseboat in London.

And, of course, his office on the boat has a pretty pine table which he uses as a desk, and a little basket to keep pens in. The telephone numbers scribbled on the back of his hands are in keeping with the image. So is the cane furniture, the cord trousers, the baggy sweater and the dreamy look in his eyes.

But Branson has a habit of turning dreams into reality. His music, film and publishing empire is worth £150 million. And he takes his weekend ease in an Oxfordshire manor house.

Now the 33-year-old hippy capitalist is determined to make another dream come true. He is going to launch his own cut-price Gatwick to New York airline on June 21 – Virgin Atlantic.

“Yeah, we are going to have amazing head-phones,” says Richard. “Great music… films. It will be very tasteful.” As will be the price. Tickets will cost around £99 one way, depending on the season.

And Caledonian girls please note that, engagements permitting, Boy George, one of the Virgin artists, will be travelling on the inaugural flight in a decorative capacity.

Talking transatlantic travel in this flowery, stripped-pine room has an unreal feel about it. Especially when you see that Richard has been doodling “I’m Virgin, Fly Me” on a notebook.

Balanced precariously next to his elbow is a model of the Jumbo Jet that he has borrowed nearly £19 million from the bank to buy. He strokes the wings of the Boeing 747 before bursting into a fit of giggles, which is something he does every five minutes. “It will be really great when we get it all together.”

Richard, who doesn’t look as though he could get it together to get up in the morning, has Coutts the Queen’s bankers, waiting to lunch him.

“Hey,” he shouts down the tiny staircase to his secretary, “I think I’m going to be a bit late. Could you just sort of ask them to hang on.”

When you are the second richest man in the British music business – after Paul McCartney – you can do that. What Richard cannot do is explain the magic talent that has enabled him to build an empire from a student magazine he started when he was a 16-year-old at Stowe public school.

He starts to mumble shyly about not really being ambitious, but there were all these gaps in the market when he was 17, so he started to fill them with mail-order discount records, and that sort of led to a chain of Virgin shops and the record label.

Then he saw other gaps – a nightclub for gays, recording studios and a cinema chain. And Richard keeps on giggling and mumbling about not being in it for money… but because it’s a challenge, and fun.

“Like the airline,” he leans forward making another attempt to explain. “Lots of young people want to go to the States, so we are helping them. We can fly 200,000 a year and it will be a lot friendlier and livelier than other airlines.”

Wasn’t he put off by the failure of that other cut-price pioneer, Freddie Laker? “Oh no. I had lunch with Laker last week and he thinks it’s really exciting. He made mistakes and we’ve learned from them.”

His eyes constantly flutter down to the floor or out of the window. Most of his sentences end with a nervous giggle, and when we get on to the subject of his personal life he begins to cringe with his hands covering his face. “I can’t talk about that. I’ve never done it before, and anyway what’s it got to do with the airline. I’ve never discussed that part of my life.”

The part of his life that he dotes on comes tumbling into the room. She is a tiny two-year-old blonde bombshell, called Holly. Richard swings, squeezes and kisses her until her mother, Joan Templemann, arrives to collect her.

It seems that Joan is just as shy as Richard. She won’t come into the room or speak. “I don’t know how to explain it all,” he says when Holly and Joan have gone. “I was married for a short time when I was 19. But Joan and I – we’ve been together for seven or eight years. We are very happy.

“Marriage? No, I don’t like the idea of that because I would have to do it in a register office and that sounds’ horrible.” But he obviously likes the idea of fidelity and a steady family background.

“Nothing is ever as cut and dry as that,” he whispered with his chin on his chest. “I have about eight different sides to my personality. There is a part of me that would like to be out every night clubbing and sleeping around with different women, but that would mean hurting someone, wouldn’t it?”

He makes it clear that Joan is not some spoiled pet who is with him for the soft life. “Joan comes from Glasgow and a six-to-a-bed background,” says Richard. “She is not after things like big cars and flash nights. She just wants me to be happy.”

And there is the philosophy of life of multi-millionaire Branson in a nutshell: “Let’s all be happy.” Okay, Man? 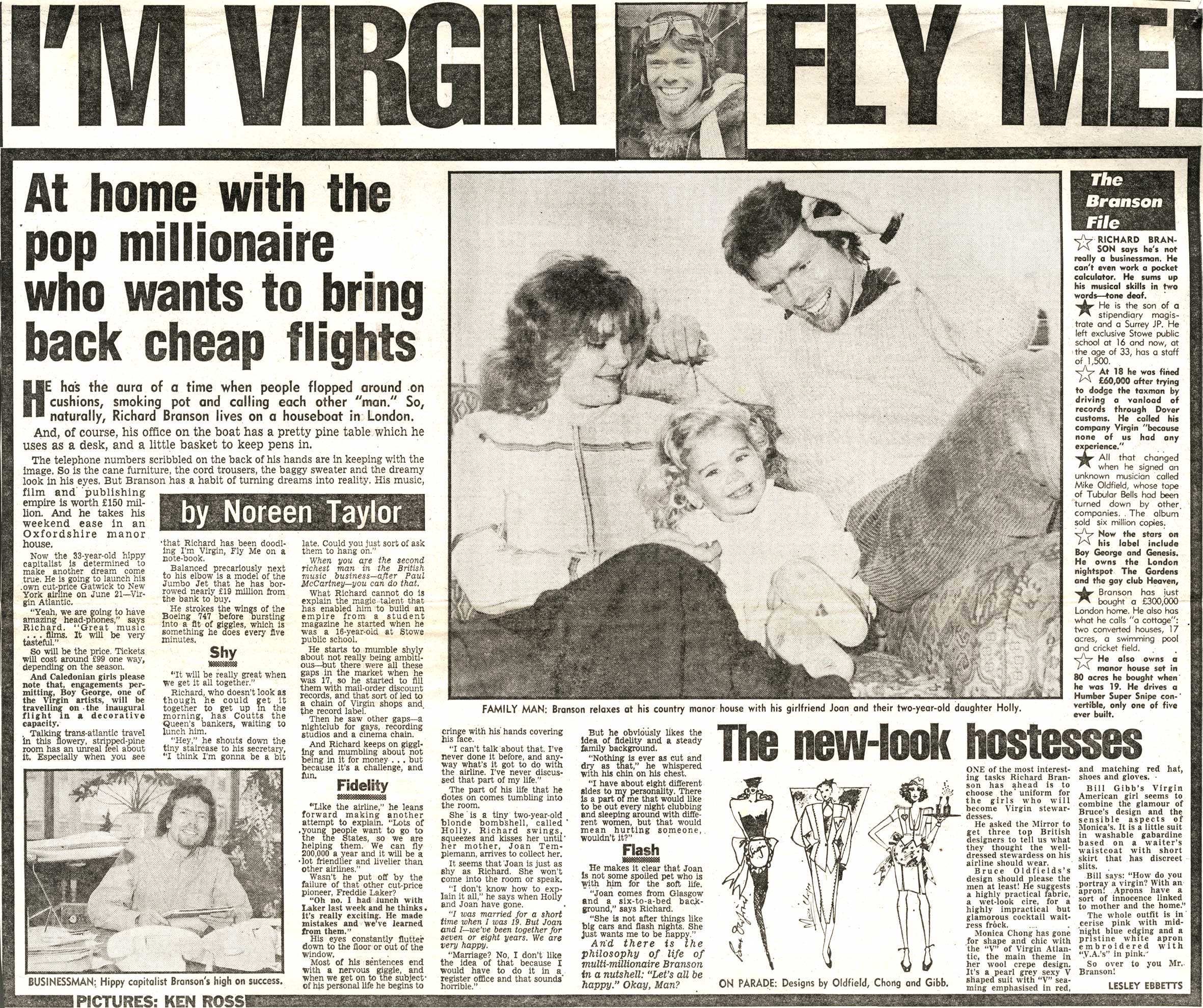