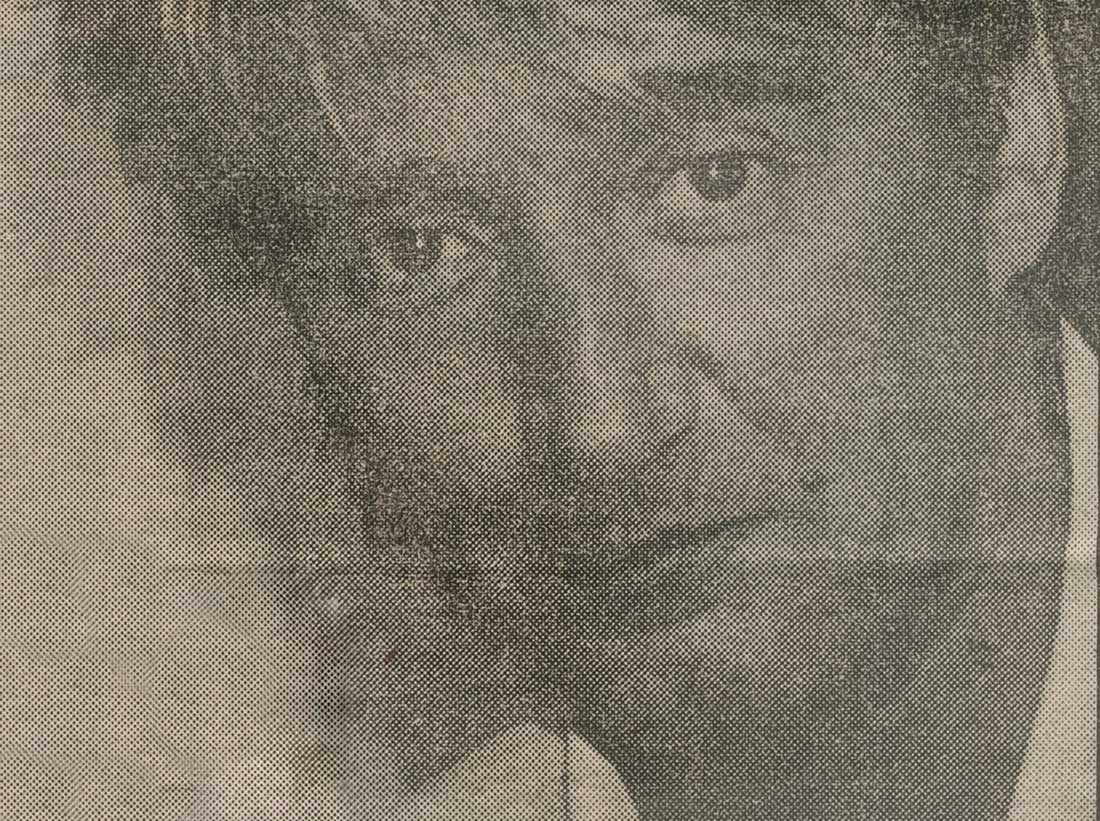 White silk shirt, white jacket, black silk trousers and a touch of gold round the tanned waist. Rod Stewart looks as though he’s walked off a Martini commercial.

The golden, blond-streaked one sips his white wine in the hotel bar and a distasteful look spreads across his face. He pulls the exquisite shirt back and starts to make sniffing noises.

“I’ve just drenched me armpits. This always happens when I meet a woman. I break out in a sweat and me ankles swell up.

“Honest,” he protests, “I’ve always been shy and nervous with women. I was never that rampant. Not even in my heyday when was I laying one after another. Calculated publicity… had to keep the old image going.”

Rod’s working on the image again. He is in London to promote an album, single and a European tour that starts next month. His girlfriend, model Kelly Emberg, had flown into London from Los Angeles the previous day, dressed in the sexiest, skin-tight trousers.

“Yeah, nice little bum,” murmurs Rod appreciatively. “I like having Kelly around. I got so depressed when we broke up. Thought she might have gone off with someone else – a younger man,” he laughs weakly.

As usual, Rod found someone: else – Kelly Le Brock, the actress who starred in The Woman In Red. “Hey listen,” he warns. “Handle this delicately, otherwise I’ll have the other Kelly on to me.”

Ms Le Brock’s mother has already been on to him, having read that Rod had ditched her daughter. “We were attracted to one another and now it’s over. But talking about it really gets up Kelly’s nose. Keeping them all happy, that’s the trick.” He explains with a tired smile.

Rod’s life has been a procession of messy relationships, one-night stands, and a marriage now in its closing stages. “Alana and I, we’re not divorced yet. It seems to be dragging on because there are lots of little things we can’t agree about. I do want the best for Alana. I can’t help feeling sorry for her.”

Rod, however, is a survivor, a Jack-the lad who always lands on his handmade shoes. “I’m lucky, I suppose. But I’ve had the bad times too. I’ve done the drugs and the all-night drinking. The only thing that stopped me going over the top is my vanity.

“Naughty substances ruin your looks. Look at my mate Ronnie Woods, younger than me and he looks awful. He’s cleaned up now like I have. He’s 41, yet there is barely a line or sag to spoil the honey-coloured profile. His heavy drinking and drug-taking are in the past.

Rod says the horror of drugs was finally brought home to him earlier this year when Victoria Sellers, the daughter of his former love Britt Ekland, was arrested on a drugs charge. “If only I’d known, he says sadly.

Mention of Britt’s name brings a wave of sadness. Does he regret not marrying the woman he loved so passionately? “Yeah, sometimes. Britt and me never talked about marriage… still, maybe I should have stuck in there. Britt was good for me.

“I learned so much from that woman. I don’t regret any of the women I’ve known. I’m not counting the sluts that throw themselves on stage after a concert.”

A camp slap on the wrist follows. “I prefer to chase a woman – well, the ones I’m going to conquer.” The conquest of Kelly Emberg pleases him. “I read somewhere that the most powerful thing a man can have is a woman 15-years younger.”

The 15-year difference between himself and Kelly makes him more insecure than he admits. When she doesn’t answer the telephone in their hotel room, he keeps joking about her running off with a younger man.

You get the feeling that the jokes are a bit of a cover-up. Suddenly Rod, the rock stud, is looking over his shoulder, worrying about male competition in and out of bed.

“There’s always going to be competition,” he says crossly. “OK, so now it’s George Michael. He has sold out Wembley quicker than I will, but it’s not going to stop me working.”

Pride, not profit ensures that Rod will go on worrying about those ticket sales. The boy who once worked as a grave-digger has made millions. “Don’t tell the wife that. She’s the one living in the big house next to Gregory Peck and Burt Reynolds. Me, I’m in the little place down the road.”

And if he wasn’t Rod Stewart, rock star? If he’d never made it? “Yeah, I do think about that. I’d be some fat bloke living in pubs.

Frightening when I think that it’s all down to these two little muscles in my throat. Without them, no fuss, no fans. Nothing. See what I mean about luck?” 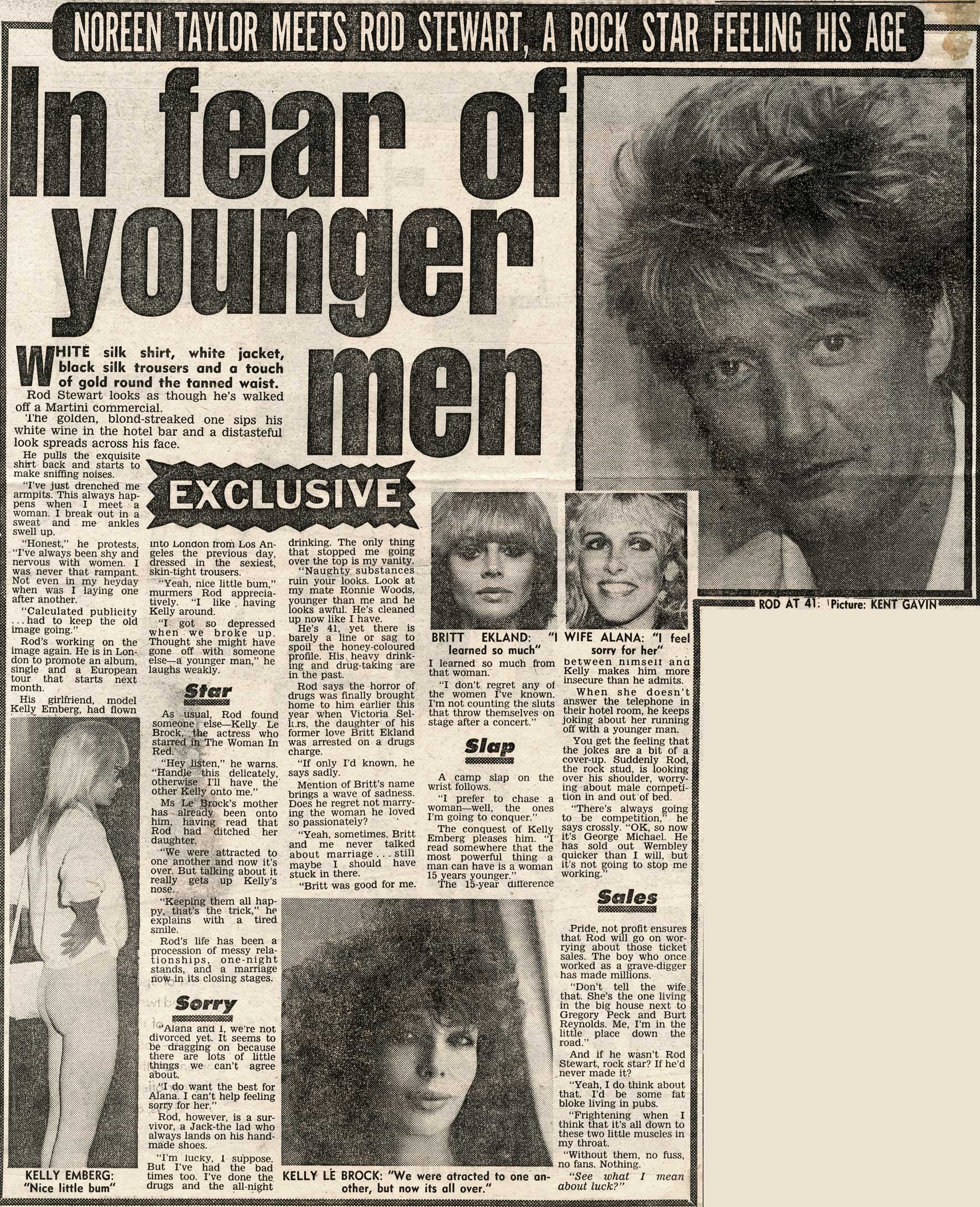