Jackie Collins strokes the large diamond in her right ear lobe, then pauses for a moment while she thinks about her sister, Joan. “My sister and I have this pact,” she says. “We try not to talk about one another because we’re always misquoted.

“And in this country I’m always portrayed as the baby sister who is riding on Joan’s coat-tails. And that just isn’t fair.”

Some baby. Books such as Hollywood Wives and her latest blockbuster, Lucky, published in Britain this week, have made millions for sister Jackie.

As she says: “I was on the best-seller lists when Joan’s career was going through a slump. “In fact, when I was moving from London to Los Angeles, Joan waved me goodbye saying, ‘Good luck, but I won’t be visiting you. I’m finished over there.’ Six months later she’s invited to join Dynasty… and now she’s like an American queen, a national monument.”

The Collins sisters are the rage of America. But Jackie doesn’t have to feel insecure about Joan’s success. Jackie’s face is 20ft high on motorways across America. She’s on every chat show, every magazine cover that matters.

But while Joan spends her millions, Jackie consolidates. Jackie is the sensible sister who has been married to the same man for 19 years. While Joan Concordes around the world, glittering her way through premieres and openings, Jackie is sitting behind her desk in an old tracksuit pouring out her sexual fantasies in long-hand.

Joan doesn’t move without an entourage. Jackie has a cleaning woman who comes in twice a week. Joan spends her fortune on clothes. Jackie hasn’t worn a skirt in ten years. Joan would die without publicity. Jackie uses it only to promote her books. That’s the sole reason we’ve been treated recently to Jackie on the Wogan show, Jackie doing Gloria Hunniford, Jackie doing anyone who will publicise Lucky. Her last book, Hollywood Wives, sold five million, was printed in 30 languages and next month will appear on television as a mini-series.

Joan might be starring as Alexis, but Jackie has Alexis-type money and power. And, needless to say, she’s loving every moment. “I had to wait until I was twenty-five and met my second husband before I found someone who believed in me,” she says.

Jackie’s first marriage was a disaster. Wallace Austin, a manic depressive died from an overdose of methedrine. Jackie had a child, a husband who was climbing the walls and a film starlet career that was going nowhere.

People think because look pretty, married a successful nightclub owner, and have a famous sister that I’ve had. an easy ride. Not so. My husband is well off, but I’m the millionaire.”

Her tanned expertly made-up face breaks into the most contented smile. “Joan and I are sisters, but we’re completely different women.

I like her, she makes me laugh. Despite what people would like to think, we’re not rivals. We’re not at each other’s throats. We’ve helped and supported one another throughout bad periods.”

Jackie and Joan both know that there could well be another, dark period ahead. Their father, former show-business agent Joe-Collins, is reputed to be following up Joan’s autobiography with a no-holds-barred book about the whole family.

Since it would be impolite of Jackie to rubbish it, she just sighs heavily and says: “I don’t think of it as his book. It’s been written for him, and. I fear that, unlike Joan and I, he is an innocent when it comes to publicity.” Another sigh, and she admits that neither she nor Joan is dancing with delight at what daddy’s book will reveal.

Jackie has three daughters – Tracy 21, Tiffany 17, and Rory 15. She insists that the girls are not embarrassed by the explicit sex scenes that bring in the megabucks. “They’re proud of me,” she says. “My books have shown young girls that women do not have to be stepped on.

“They can be as sexually aggressive, and hunt the way men do. Stop sitting there waiting for the phone to ring, I say. Pick it up if you fancy him.”

Jackie writes about jet-set sex because she’s had a ringside seat. Husband Oscar Lerman co-owns Tramp in London and has opened another club in Los Angeles. Both places are packed with the rich and famous.

“I sit there watching,” she confides, with just a glimmer of distaste.

“I’m taking it all in and they know what I’m up to: it’s as though they are performing for my next book.”

Her next book is Hollywood Husbands. One of the characters is a man who is married to a famous woman. He takes over the woman’s career, spends her money on coke and picks up other women until she throws him out. Of course, it’s fiction. Yet it has such a ring of familiarity it makes you wonder… 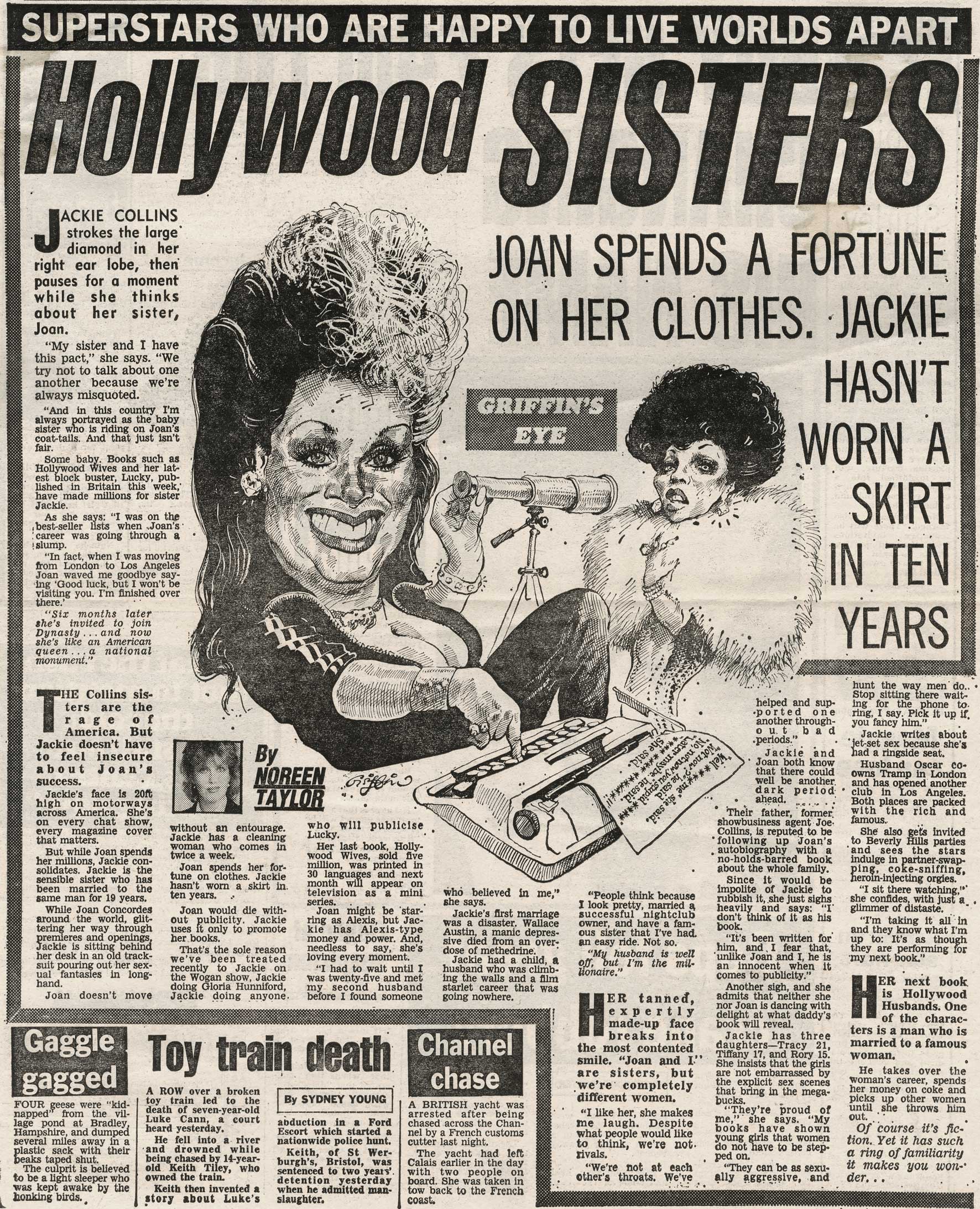