Kings, Courtesans and the Princess 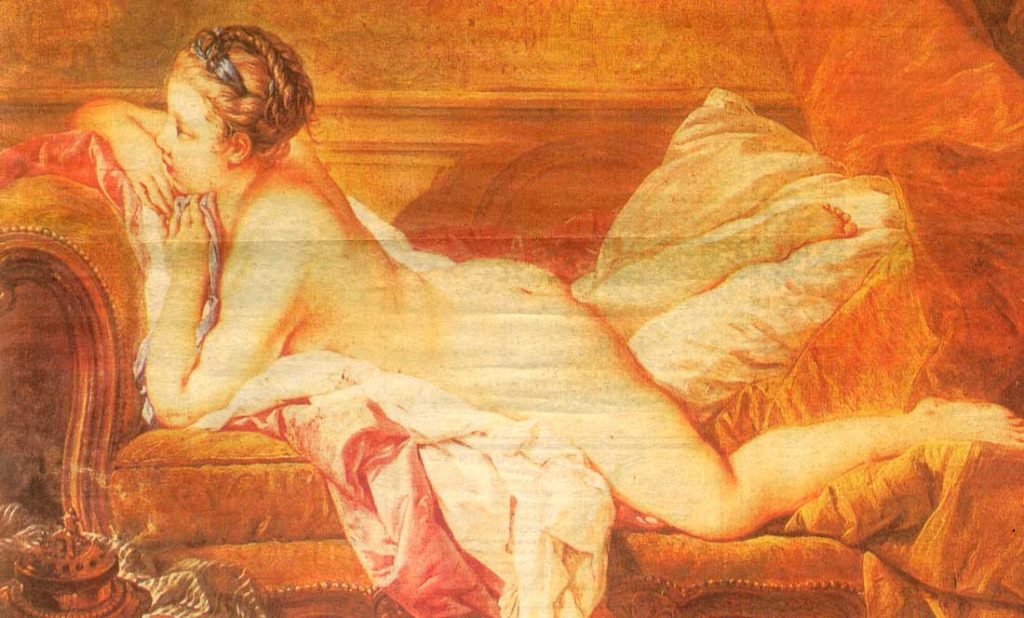 From the top of a beige-carpeted staircase in Kensington Palace a female voice floats down. The accent is vaguely mid-European. “Can you bear another flight? My little studio is right at the top.

For the voice on high, this is a family home but in few other places would I be following a grey-suited footman past Winterhalter portraits of Queen Victoria and Prince Albert. This is a rare glimpse inside one of England’s royal palaces.

Finally, a dazzling blonde figure comes into view. Princess Michael of Kent is in yellow like the walls – a woollen, yellow two-piece topped off by a white silk bow at her neck. Pale, slanting eyes are set off by tan make-up. Marble-sized pearls peep from below the scarf, while smaller pearls dangle from ears left bare by a chignon.

The overall impression is one of grandeur, of beauty on a rather stately scale. You can see why she caught the eye of the Queen’s good-looking but low-profile cousin, Prince Michael, whom she married in 1978.

While the marriage brought the former Baroness Marie Christine von Reibnitz the kudos of a royal title it also created in its wake clouds of controversy. An explosion of headlines informed Marie Christine and the world that her father had been made an honorary member of Hitler’s SS during the war, although she published proof that her father’s cavalry regiment was the only one to be completely exonerated of any wrong doing at the Nuremberg Trials.

Being a Catholic and a foreigner with an annulled marriage behind her did not help either. Nor did her frankness, ambition and air of confidence blend easily in a family that prizes the self-effacing aura of the amateur above all else.

She talks rapidly, excitedly, arms gesticulating as she gives an impromptu tour the top floor with its glorious views over Kensington Gardens. “We live here during the week,” she says. We, being herself and Prince Michael. Their two children, Lord Frederick and Lady Gabriella Windsor, are at boarding schools.

“Friday lunchtime until Monday evening, we are in the country. I’m afraid I am rather greedy about my weekends. Come look at the garden,” she says pointing out of the window at the lush walled greenery below. The nearest garden is not ours. It belongs to the Prince and Princess of Wales.”

As if on cue, her next-door neighbour, the Princess of Wales emerges from a car with an armload of shopping. Four branches of Britain’s royal family share this palace prompting Prince Charles to rename it ‘the aunt heap’.

Princess Michael’s voice swoops and soars, alternating between flirtation and command. “Now to my hideaway, my place of solitude,” she announces, showing me to a room perhaps best described as ‘rich Bohemian meets English country house,’ whose centrepiece is an enormous day bed covered with a fox fur spread.

Royal tiara-clad heads of ancestors stare out of silver frames dotted around the room, reminding you of how secure this pyramid of privilege has remained over the years. As the pile of books on the floor indicates, we are here to discuss the Princess’s role as a professional writer. Cupid and the King, an impressively researched and elegantly written set of profiles documenting the lives and loves of five royal mistresses, is her second book.

The mistresses she chose – Diane de Poitiers (one of her ancestors) Nell Gwyn, Madame de Pompadour, Marie Walewska and Lola Montez – are naturally women who fascinate her. “My book is about the great loves in the life of kings or rulers forced, for reasons of State to make a political or dynastic marriage.

“These were men with absolute power and financial resources and yet were obliged to marry women they often did love, let alone like. So, to whom did they turn when they were sad or confused and when they needed love? Who were the great royal mistresses? How did they win the king? And most fascinating of all, how did they hold his love and loyalty?”

Her first book, Crowned in a Far Countrywas the subject of accusations and plagiarism. Two writers claimed she had lifted segments from their books and transplanted them into her own. Her publishers made small financial reimbursements.

“I put that down to a learning experience. Every historian has a researcher. I had a charming girl work for me, but, unfortunately, sometimes, she left the source notes of her typed pages. These 1 would put in a box file – one for each chapter.

“Months later when I came to write up from the notes, many without sources, I took to be my own. Clumsy and amateur of me, but for this book I learned to use a word processor which has helped a lot. I have no qualifications as a historian. I see myself more as a story-teller. I want to tell the story of some of history’s more fascinating characters and my stories just happen to be true.

“I want to attract more readers who would not normally buy history books and entertain them. I have a lot of energy. I need a creative outlet I cannot. I cannot just be a talented housewife. Writing is in my family and I find it enormously satisfying like jumping a big fence in hot blood after a fox. I don’t want to kill the to kill the fox. I’m only after the thrill of the chase.”

A deep male voice from downstairs interrupts the royal reverie. The Princess walks over to the door and calls out: “Darling? Hello my love, I am in the middle of an interview. See you later.”

The Prince, apparently, has just returned from Kuala Lumpur. “I speak English, but I am half Hungarian,” she says, “so when I’m on duty I have to remember to talk slow, think slow because I’m full of temperament. So, I become excited, wave my hands about, and of course I mustn’t.”

This cultural misunderstanding extends to her strong streak of ambition. “In Britain, it’s a dirty word, a negative thing. Where I come from it’s an asset. No ambition, no success. I always tease my husband that I was much better off before I married him. In a way I had a more agreeable life because I had more freedom. I could go where I pleased, when I pleased, and would probably have made my home in France. But my handsome husband twisted my arm and here I am.”

A coquettish smile, a twist of the shoulders, another facet in an already bewildering array of expressions, body language and vocal delivery. A performance that can be compared to watching Meryl Streep engaged in a warm-up. Or watching, perhaps, a very complicated woman.

Everything is up for display. Her command of languages, her sporting prowess, her interior designing talents, gardening skills, grasp of historical events, her interest in computer chess. She must be exhausting to live with. Yet to be with her, to be close to that fizziness she exudes, is exciting. She is, above all, a life-enhancer, an adventurer and probably worth the exasperation.

In Cupid and the King, the Princess describes the royal courtesan as a figure obscured by mystery and hypocrisy. The French referred to them as history’s “left-handed queens”, women who were feted by royal lovers, feared by courtiers but rarely recalled in official biographies

For her study of these intriguing figures, she chose five very different women: Diana de Poitiers, the paramour of Henri II of France who was 18 years her junior; Nell Gwyn, the bawdy London stage urchin became the favourite of Charles II; Madame de Pompadour, the elegant chatelaine of Louis XV whose extravagance and enraged the people of France; Marie Walewska, the idealistic and patriotic young Polish woman who became the mistress of Napoleon in the hope saving her country; and the most notorious of all, the flamboyant Lola Montez, a dazzling Irish beauty who won the love of Ludwig I of Bavaria.

“I did not choose my five subjects just because they might provide material for a naughty romp through royal bedrooms. I was more interested in the fact that these women were ambitious, intelligent and

deeply devoted to their royal lovers. They were often lonely figures threatened by rivals, jealous courtiers and politicians who saw them as sinister influences behind the throne,” she says.

“In their time, they were undoubtedly powerful. But in the end, theirs was a power essentially dependent on the whims of a sexual liaison. Marie Walewska shows all the classic traits of the victim. Passive, masochistic, she allowed Napoleon to seduce her and eventually destroy her.

“Lola Montez, a 19thcentury party girl lived for kicks and died of syphilis. The only English mistress to rise from the lower orders, Nell Gwyn spent much of her as favourite trying to wring a title out of Charles for herself and their children.

“They were all special in their separate ways. But what each of them shared, and what fascinated me was their ability to spin webs of feminine mystique, of enchantment and seduction, it seems to me, the modern woman has almost forgotten… perhaps because she feels she no longer, has any need of them.” 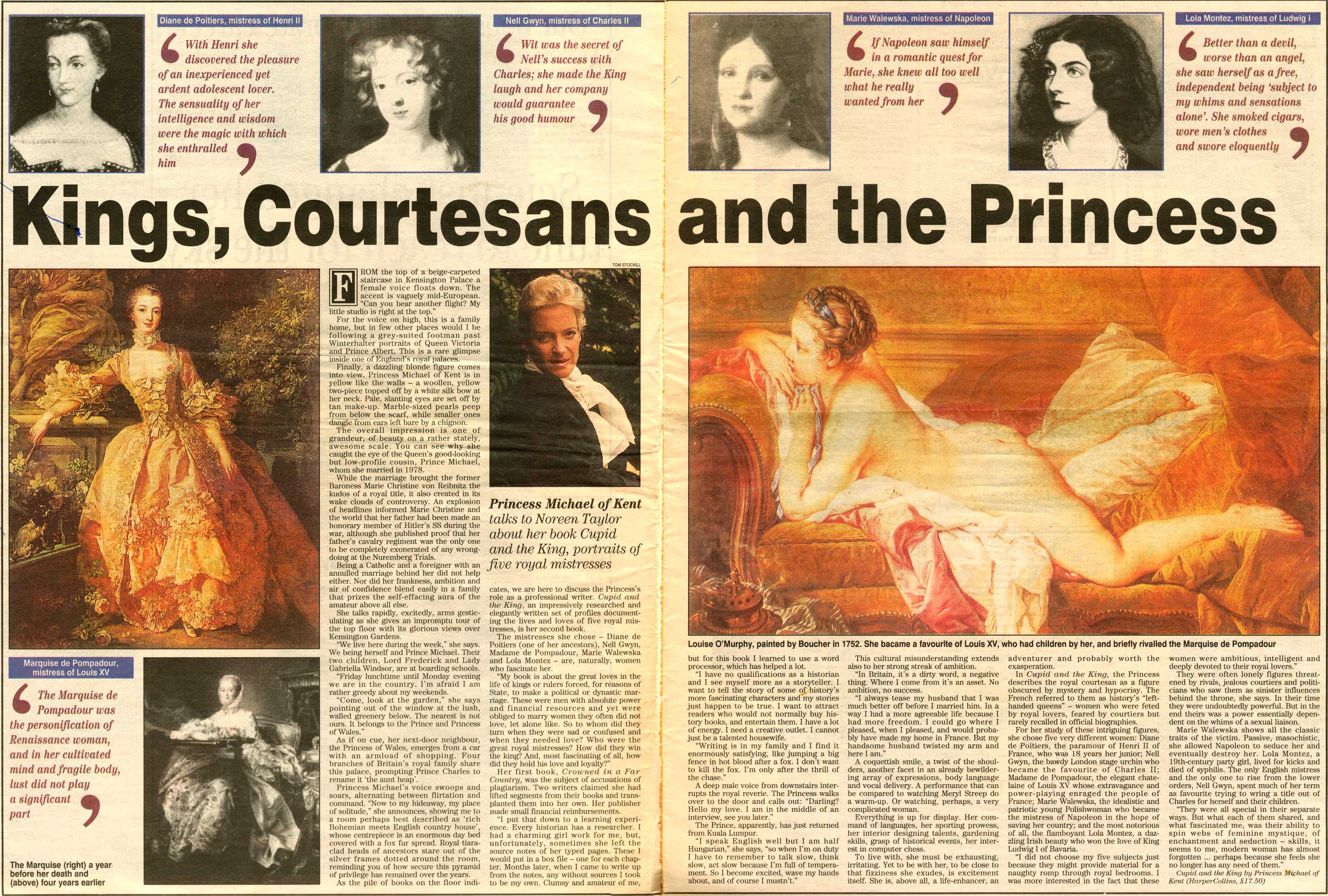