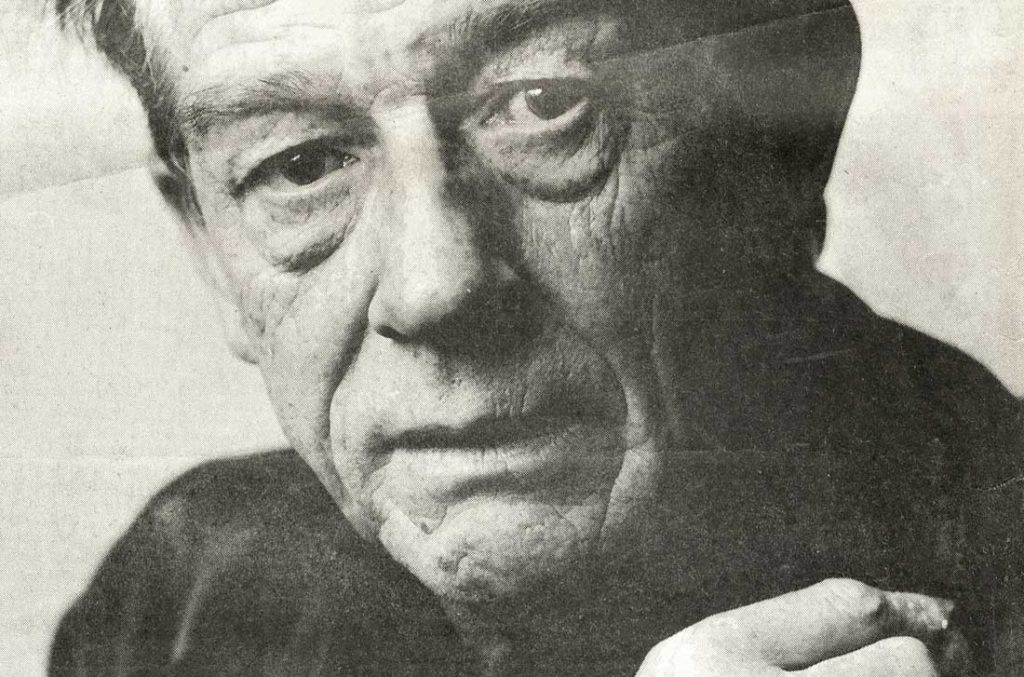 The last time I met John Hurt I wasn’t at all impressed. He had just finished Scandal, the film about the Sixties Keeler-Profumo drama in which he played Stephen Ward, and we lunched at Wiltons. Morose, unhelpful, he barely touched his food, looked as though he might burst into tears at any moment, and I left thinking what a sad, depressed man.

Imagine my surprise then, nine or so years on, at meeting him once again. This time, he is smiling and looks younger, with his face lightly tanned. Dressed in elegant top-to-toe black, he bounds into the room, hands outstretched, brimming with vitality.

“Yes,” he says, “I’m a different person, and it’s everything to do with being in love. For two years I’ve been with a woman who is my lover, my partner, who travels everywhere with me, and looks after me. 1 don’t know what I’d do without her. That’s why I look so brushed-up and happy.”

The woman is Sara Owens, who once worked for John’s friend, Gareth Browne, the Guinness heir, when he campaigned to stop a tourist centre being built near his Irish house, Luggala, in Co Wicklow. “It’s love,” he says again, but adds: “It’s a situation fraught with difficulties, which I can’t talk about.”

Those “difficulties” arise from the amazingly complicated circumstances following Hurt’s previous marriage, his third, to Jo Dalton, a production assistant he met on the set of Scandal.During their marriage, Jo fell for Sara’s brother, Darragh, and Hurt was so devastated by the split that he went back to his second wife, Dorina Peacock.

He returned to the house they had bought in Kenya, and from which he had deserted her in 1988, when she was having fertility treatment, in favour of Jo. During this brief reconciliation, Donna told Hellomagazine: “I might be wrong, but I don’t believe there will ever be another woman. I’ve told John that all he has to do is to give me a loaded revolver and I’ll do the rest myself.”

He says now: “I should never have gone back. Never! Big mistake. But I felt so guilty, so shabby about the way I’d gone off and left her. I felt awful about treating Donna like that and I was in pieces when I went back to her, in a terrible state. I was probably on the brink of a nervous breakdown.

“She should have thrown me out, telling me to come back when I was in better shape, when I might have been capable of making decisions. I think I went back to apologise for the way I had treated her, to make my peace if you like. Because of what I’d been through with Jo, I realised how very badly I’d behaved towards Donna. Anyway, what happened was that all the issues that had driven us apart in the first place reared up again. Awful! Terrible mess! I get the feeling I haven’t heard the last, either.”

Regrets, remorse, repentance. His has been a life lived on emotional peaks and troughs. His longest relationship ended tragically when his partner of 16 years, Marie Lise Volpeliere-Perrot, died in a riding accident in 1984. Two young sons from his marriage to Jo finally brought the sobering responsibility of fatherhood. “It came late to me, in my fifties, but one’s love for children is the opposite of intellectual, almost animal.”

They live with their mother in Kildare, in the Irish mansion that went to Jo as part of their divorce settlement, while John and Sara share a rented cottage in Co Wexford. “My sons’ lives are so different from my childhood, thankfully. They are surrounded by unconditional love and security. My father was a clergyman and I was brought up by fear and bullying, which leaves its mark on you. To this day I cannot bear to be near people who conspire to hector. Some people know exactly which buttons to press — in both work and relationships — and that makes me angry.

“When I escaped from that ecclesiastical morass, I felt quite lost. Finding the acting fraternity was such relief. It was paradise to know that such people existed: kind, graceful, competitive certainly, but so different from those I’d grown up with.”

Now 58, the award-winning star is one of Britain’s most accomplished actors. Among his many memorable roles are those of the hideously deformed John Merrick in The Elephant Man, the junkie prisoner in Midnight Expressand the dustily camp Quentin Crisp in The Naked Civil Servant.He rarely stops working. “Thank God! There are so many good actors driving minicabs. Eleven months was the longest rest for me and I didn’t much like it.”

His latest film, Love and Deathon Long Island, in which he plays an elderly English academic, a distinguished homme de lettres, who falls obsessively in love with one of America’s cheesiest teen idols, has received ecstatic reviews in the States. As a tortured widower. Hurt collects cuttings, pictures and videos of the beautiful boy — played by Jason Priestly — who tears his life apart.

“I’m not sure it’s a film about being gay,” says Hurt. “It examines the nature of obsession, a glorious emotion. Everyone who saw the script wanted to do it. The minute I read it I knew it was one of those dream projects that had to be grabbed.”

Despite the cascade of starring roles, he claims he is not wealthy.

“Comfortable enough, but rich, no. Would that I was, but I’ve had too many relationships and marriages for that. Clean slates, you see. Except they never end up that way. Too many scratches. In my relationships no one ever had to ask for housekeeping.

“I had my life to live over again, I don’t know if I could have lived any differently. What I am now, the man, the actor, is a blend of all that has happened, and I can’t strip away any of those cumulative layers. Since I’m so hopelessly ruinous with money, given the chance again, I would probably structure my finances. Houses, paintings, they’ve all gone after the mess of my marriages. Sara and I have to find some new centre to our lives now. And some money.”

That centre will be somewhere in Ireland, a country he fell in love with during the Sixties when he used to stay with John Huston, the director, in Galway. “I put one foot on Irish soil, and that was it. Home. I never wanted to leave. Huston had this beautiful place, where he played squire, holding the world’s greatest collection of pre-Columbian art.  He used to hunt, as master of the Galway Blazers. His stables were filled with horses and his house had incredible characters.

“Acting introduces you to wonderful people. I believe acting is a gift, something you do because you’re good at it and enjoy working. I don’t believe our American cousins always have the same reasons for acting. Position, money, fame seem to them synonymous with the profession. Those are trappings that have nothing to do with the job.

“Of course, I have doubts about what I do. Is it worth anything in the end? Does it have any real value in terms of society? There are, I’ve decided, no simple answers.”

He sighs and lights another cigarette. A star who chain-smokes: he must empty rooms in Hollywood. “I stopped for ten days recently. Then I found myself in Madeira, having lunch with a group of French people, all of them happily lighting up and puffing away. I couldn’t resist.”

He smiles to himself, happy with his helplessness in the face of temptation. It could be a summary of his life so far.