Interview with Mandy Rice-Davies, one of the figures in the 1963 Profumo scandal, published in the Daily Mirror, September 1989 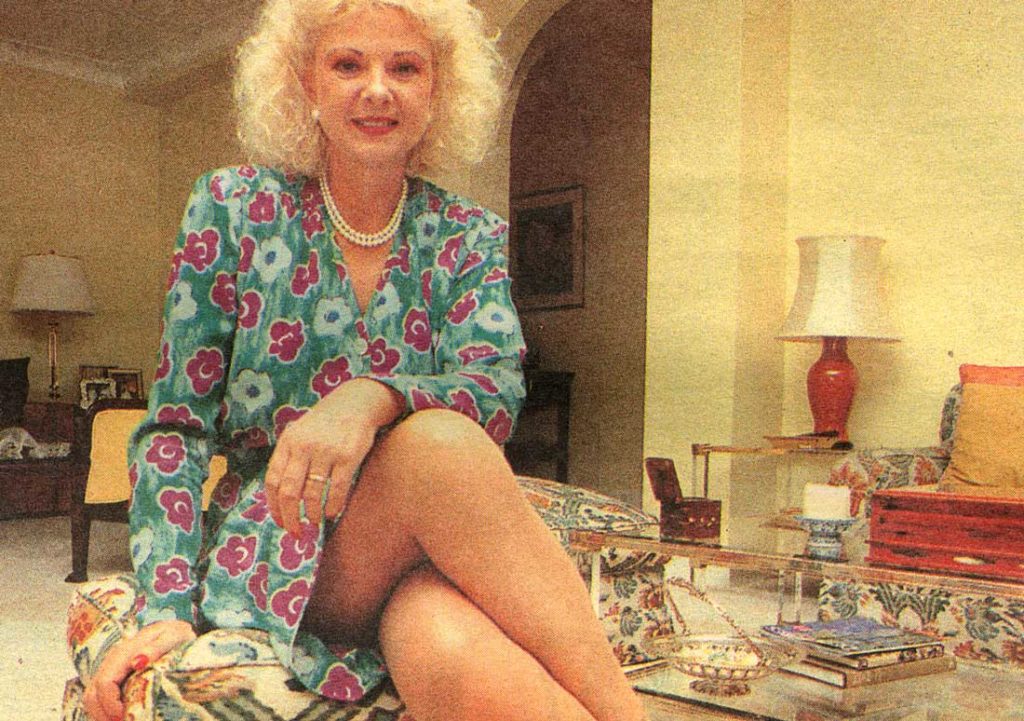 Mention the word scandal to Mandy Rice-Davies and she raises a hand, palm outwards, as though she had just slammed a door shut. “Can we still be discussing this business after 27 years?” she asks wearily through half-closed eyes.

“Not that it haunts me, but sometimes I think it will follow me until my teeth fall out. And no, I haven’t seen the video or the film, nor have I met or spoken to Christine Keeler for years.”

Mandy is 44 now and married to her third husband, Ken Foreman. They divide their time between an impressive mansion flat close to Harrods in London and an apartment in Florida.

Mr Foreman is chairman of Atwoods, a waste disposal company that has Denis Thatcher as its non-executive deputy chairman. And Mandy… well, Mandy has played a variety of roles since the one that made her famous in 1963.

In those days she was the petal-hatted poppet famous for her cheeky one-liners at the Stephen Ward trial. The tough, baby-faced good-time girl who, along with Christine Keeler, formed the package that played a major part in the fall of Harold Macmillan’s government.

Later, when the headlines faded, so did Keeler. She sank into a state of depression and poverty. But Mandy bounced off to Israel to sing in cabaret and make her fortune opening a chain of restaurants and night-clubs. She returned to London nine years ago with her daughter, Dana and appeared in the film Absolute Beginnersin the West End stage hit, Dirty Linen.Then she launched herself in her latest role as a writer of historical novels.

Unfortunately for Mandy, the launch of her second novel, The Scarlet Thread, coincides with the video promotion of Scandal, the film of the Profumo scandal in which she was a central figure. She laughs grimly and almost to herself she says: “Yes once again it’s out there, around me, a pest.

“Good thing I’m an optimist with a sense of humour. I think those are the qualities that pushed me out when I wanted to hide under the bed clothes, away from the world.

“It would have been easy for me to float off on a wave of drink and drugs in order to forget. But I always told myself, ‘You can’t give in, Mandy. The world is a kind, compassionate space and it’s up to you to go out there and pursue that happiness.’ I think I’ve succeeded – at last,” she says, turning to switch on a spotlight to illuminate one of the valuable paintings on her drawing room walls.

She is tall, slim and expensive looking with a halo of platinum curls and one of those tired, seen-it-all smiles. More sedate now than sexy, she describes herself as “menopausal and past all that business. My husband fell for my brains not my looks. He is a wonderful man, just wonderful.” He calls her Marilyn.

“Yes,” she laughs, “I’m introduced as Marilyn Foreman now. People know who I am, but it’s no big deal. When they come up me it’s usually to pour out their problems. ‘You have been through so much’ they say, ‘and you’ve survived. Tell me how you do it.’ I just tell them to use their heads not their emotions. Control, courage, work that’s what gets you out of the depression groove. With young people the past is not a problem. They wonder what all the fuss was about.”

But how did she introduce her past to her daughter? “Of course, I spoke to Dana when she was growing up but children tend not to be too interested in their parents’ backgrounds.”

Although she wants to talk about her second novel — a saga about the struggle for a Jewish homeland – she can’t help returning to that time when she was naughty Mandy. The kind of girl parents warn their daughters about. The girl who, at 16, left Birmingham for London and two years later became the mistress of notorious gangster landlord Peter Rachman. Mandy and Keeler, a dicey, spicy duo. One a survivor. the other a victim. The only vice they share these days is a compulsion to chain-smoke.

Mandy mixes in high powered business circles, dines with senators and is at ease in the celebrity world she has occupied since her Israeli night-club years. If there have been sneers and sniggers or any awkward moments in her life, you won’t hear about them from Mandy.

“I’ve always been surrounded by kindness and goodwill,” she replies defiantly. “Now, when I think back on my youth, it does seem terrifying. But I prefer not to wallow in bitterness or tragedy. After all, I cannot go on being branded for mistakes I made as teenager.”

The only hangover from the scandal years she is proud of is her entry in the Oxford Book of Quotations. The famous “Well, he would, wouldn’t he?” Mandy’s bold reply during the [Stephen] Ward trial when the prosecution told her that Lord Astor denied being her lover.

Her favourite quotation, the one she lives by is from Blake’s Proverbs of Hell: “The road of excess leads to the palace of wisdom.” And she should know, shouldn’t she?