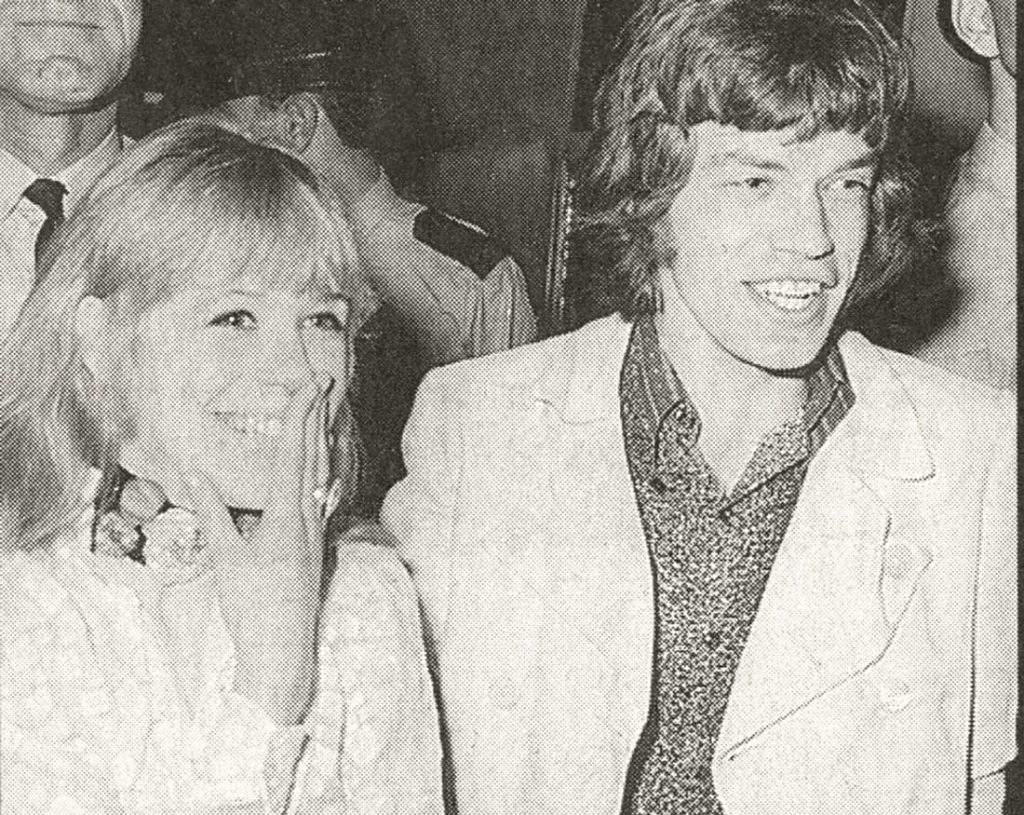 I first met Marianne Faithfull in the late Seventies when she was married to her second husband, punk musician Ben Brierley. Reviews of her album, Broken Englishhad described her as a brilliant new discovery. It was so different from the previous decade when, as Mick Jagger’s lady, both she and her hit, As Tears Go By,had been treated as inconsequential pop froth.

Both Marianne and Ben were staying in the pretty Buckinghamshire cottage Jagger had bought for her mother. They were heroin addicts. Flaky, fragmented, unkempt creatures, they were unable to concentrate on any topic for very long. After a couple of hours, the interview disintegrated into a rambling gabble.

Eventually I left, despairing for them, convinced “rock star in death overdose” headlines were only months away. I underestimated Marianne. When we met again last week, 17 years on, I reminded her of that first meeting. “Oh, you must tell me all about it. I’m sure I liked you.”

The transformation has been extraordinary. Not only in her looks — bright-eyed, sleek, shining hair, black trouser suit, a present from Calvin Klein (Marianne has always had great contacts) — but in the efficiently crisp manner with which she conducts herself. Only the voice remains the same: a theatrical husk, a tribute to years of brandy and cigarettes.

Even her facial scars, a hangover from street life, have an edgy appeal. Compared to the broken rock babe persona of the lost decades, this reincarnation has, by comparison, an almost Thatcherite briskness. “Pictures. Right! You want me outside, then let’s get going. Neil, cigarettes, please dear,” she asks the publicist. “Would you mind? Know I’m not going to last.”

We are in one of the drawing rooms of a neo-Gothic pile, Braziers Park, near Reading, an educational establishment co-founded 50 years ago by her father, Glyn Faithfull, and where he now lives in retirement. Marianne is visiting him while on the European leg of her An Evening in the Weimar Republicconcert tour. The show is a celebration of the music of Kurt Weill and the lyrics of Bertolt Brecht, both long-time passions of Marianne.

It has been playing to sell-out audiences across America, and earning ecstatic reviews describing her as one of the finest interpreters of that rich musical heritage of the inter-war years. I tell her she looks pleased and at peace with herself. “Well, I feel I’m finally doing what I was always supposed to do, except I didn’t have that trust in life, so I resisted.

“I usually wake up happy these days, though not in a smug way.”

Asked to describe herself she opts for sensitive. “Deeply so, maybe drugs were the only way for me to cope.”

Regrets? “Hundreds, though I’m not eaten up by them. I try to stay in the here and now. If I hadn’t wasted so many years, I’d probably be at the point I’ve reached now, anyway. Should I have taken the planned path, studied music at the Royal Academy, and sung Mozart for the last 20 years, I’d probably have discovered Weill and still be doing exactly what I am now. Instead I chose the empirical route.,. Oh Lord, I’m sorry.”

She breaks off for a moment, groaning, rubbing her forehead in irritation as though she can’t face another question. “It’s just that I feel so inadequate when it comes to explaining myself, my motives, my lost years, my mistakes, my addictions. I don’t really have any answers you know.

“People think I must have after what I’ve been through, but I can’t explain the circuitous journey I took. Sometimes, I quiver in fury at the waste, other times I believe I must have quite liked doing whatever I did. That I have a need for drama has never been in dispute, it’s just that I’m unable to come up with reasons for what happened.”

She obviously tried. I remind her of Faithfull, the autobiography published three years ago detailing a life that went from living with Jagger in Chelsea splendour to hanging out homeless on top of a Soho wall. “Oh, that book. It was too dark, made everything so traumatic and caused so many problems, especially with my son.”

Nicholas, 31, her only child, born when she was 19 and married to John Dunbar, is now father of a four-year-old son, Oscar. “I mean Nicholas is just here in London doing his life, and my reminiscences were understandably too painful for him. And yes, of course I’m friendly with John, and Ben too, who is now clean and running an antique shop.

“Yes, I’m friends with Mick too. And why not? Sharing so much of your life with people you’ve loved, how can you not be friends? Drugs were my downfall, nothing to do with Mick, who I have a great respect for. “Such a talented man, and still writing beautiful songs.

“A few weeks ago in New York he sent a limousine round to pick me up after my show. He wanted me to join him in a studio where he was recording with Charlie and Keith, and we just sat around for hours talking, drinking coffee, enjoying each other. I’m not competing with the Stones anymore you see, so it’s cool. I’m out of that equation. In fact, most of my audiences don’t associate me with Mick and that period. They’re too young for all those rock chick icon memories.”

Arriving at the recent Vanity Fair Oscar night party, Marianne was met at the doorway by Bianca Jagger who insisted: “Mick’s over there. You’ve got to go and talk to him.” The three share a history positively operatic with drama. Marianne’s suicide attempt and drug habits finally closed her relationship with Jagger. He and Bianca parted after a most acrimonious divorce.

Yet there they were huddled together for most of the evening. Since 1985, after six months of treatment paid for by one of her saviours, Island Records, Marianne has lived mostly in Ireland, in the romantic Shell Cottage, part of the 1,000-acre Carton estate, west of Dublin.

“Shan’t be living there anymore,” she says. “Cost too much. So, I’m going to do something I’ve never done in my life before. I’m going to buy a house, probably by the sea in Co Wicklow. Nothing extravagant, because I don’t have lots of money, which is why I have to work so hard. Decorating a house, that’ll be my latest joy.” What about love? Men? Had she resigned from those joys?

“I used to have a terrible block about falling in love. I’d been hurt so many times that I couldn’t allow myself to do so. Being pretty, I used to be so easily manipulated by flattery, then I decided to block it all off for a while. Safety, that’s what I thought I wanted. Then you may as well be dead. I’m in love now, since you ask. Very much so, and no, I won’t say who he is, although it’s quite a big thing.

“Loving someone and being loved, couldn’t do any of that when I was an addict. You see, when you’re on drugs you’re locked out of everything, including relationships. Your habit is the only thing that counts. Nowadays, I prefer the solitary life. I don’t drive, I live in the Irish countryside, so I’d have to have found some measure of peace. I feel completely at home in Ireland, accepted, part of the rhythm. There are too many ghosts in London. I’d feel haunted living there, although I love popping across to see friends, and of course my grandson.”

Still a smoker, does she miss drink? “I have the occasional glass of champagne and there are times when only a gin and tonic will do, but no I don’t miss any of it. Doctors can’t believe how healthy I am. I have to be careful though, I’m always going to have to watch it. Going to bed straight after a show with a bowl of cornflakes and a book is what I do now.

“When I was young I could stay up for four nights and still look wonderful. Not anymore. Can’t think of anything that would make me stay up all night now. Apart from… oh, all right then, the right man might make me stay up all night.” Gales of bawdy laughter follow, reminding you the raver has not been completely eclipsed by the woman, however resolute and business-like she may appear.

“Please, I have an aversion to the born-again supposition,” she pleads. “I prefer the cooler language of regeneration. Coming back to myself is what I’ve succeeded in doing. During the last two years of my mother’s life when I was clean, I don’t think she liked me quite as much. Too straight.

“I used to tell her that finally she was getting all of me. That’s what I’ve ended up with. Nonetheless, I would never dare go around crying victory. To me that would be the greatest folly of all.” 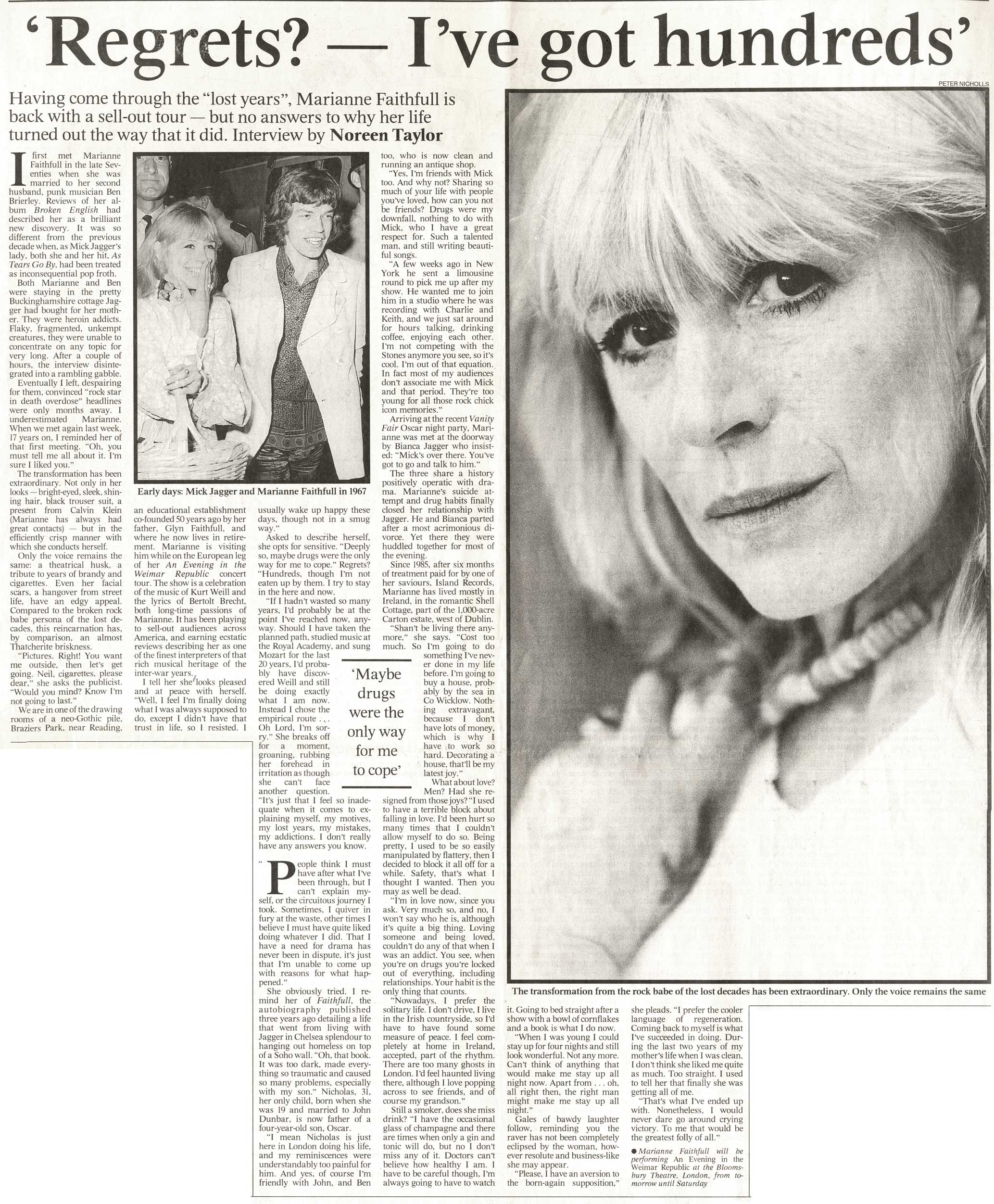