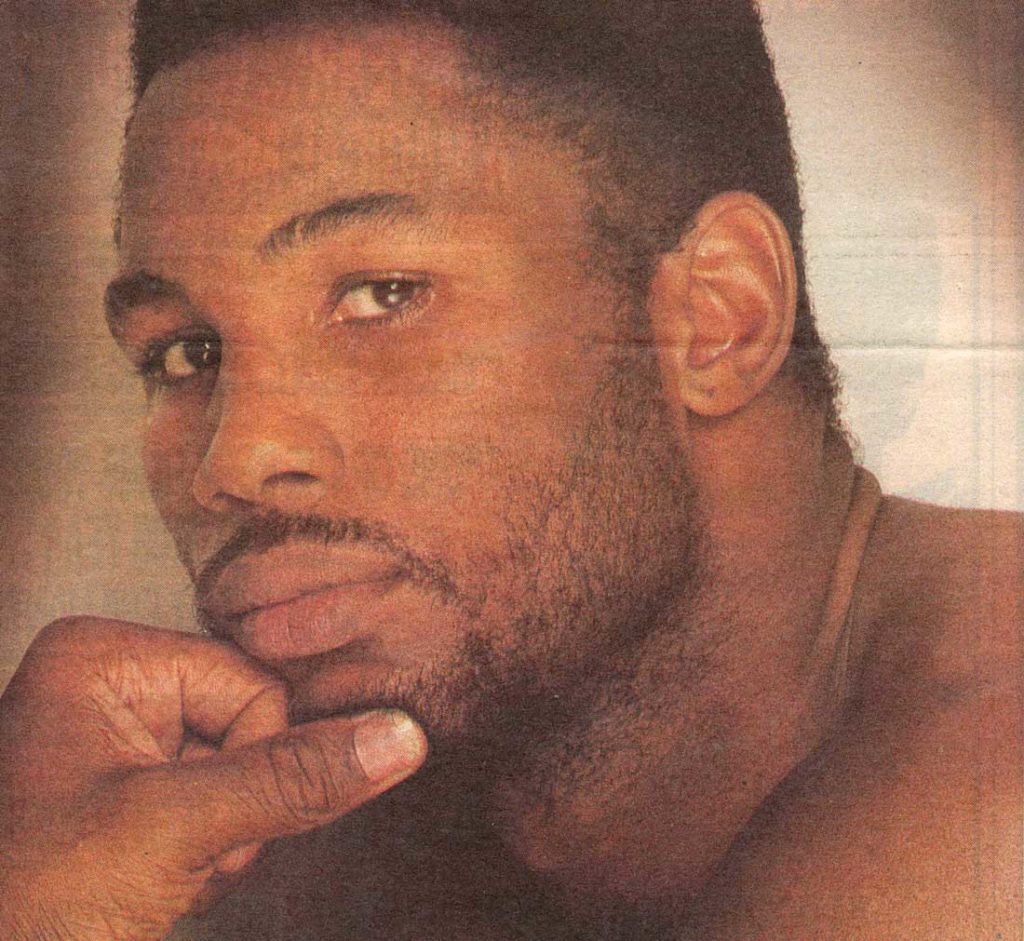 On Lennox Lewis’s bedside table sits a copy of Webster’s Dictionary, alongside an introductory guide to Buddhism: theInner Selfand a chess set. Interests that reveal a sensitive, reflective soul, you might think. And not those of a man born in London’s East End, who is one fight away from challenging for the world heavyweight boxing title.

A look close to hurt crosses Lennox’s handsome face as he absorbs the thoughts you wish you had not shared with him. “You think boxers are dumb?” he asks in a soft courteous voice. “You think they’re big, amiable lugs from the ghetto, incapable of stringing two words together? But that isn’t so. If they are to survive in the ring they have to have a sense of judgment and sharp reflexes. Boxers are a lot cleverer than people imagine.”

Maybe we also imagine them draped in gold jewellery surrounded by wall-to-wall bimbos, with a fleet of Porsches waiting outside. Now it’s his turn to be condescending. “Boxing is a business and nowadays it attracts people from all sorts of backgrounds. Maybe you have been watching too many Rocky films.”

A stream of sweat rolls slowly down perfect, dark olive cheekbones, and you wonder how they’ll look after the Razor Ruddock match at Earl’s Court in October. For the past five weeks, before he arrived in Britain a few days ago, Lennox has been preparing himself for Razor, training in this remote comer of Pocono, Pennsylvania at a holiday retreat known as Caesar’s Resort for Lovers.

Heart-shaped jacuzzis, red shag-piled walls, mirrored, canopied beds and honeymooning couples make a strange backdrop during this monastic pre-fight period. Lennox rises at 5.30am, runs five miles, mostly uphill, then breakfasts before returning to bed. Swimming, cycling and sparring sessions take up the afternoon. In the evening he dines on Caribbean dishes prepared by his own chef.

“I don’t mind being confined like this,” he says stretching out his long, powerful body. “It’s a small sacrifice. All I’m thinking of now is the road ahead. It’s a journey that began when I was a school-boy in Canada when I realised God had given me a special talent. I guess you could say that’s why I’m interested in religion. My mother is a member of the Pentecostal Church but I’m still looking for my own.”

Lennox Lewis, 27, is the son of Jamaican parents who broke up when he was 12, Lennox and his mother Violet, then moved to Ontario, Canada, leaving his elder brother Dennis behind with his father. After winning an Olympic Gold in Seoul in 1988 he turned professional and moved back England. He lives with his mother in Bexley Heath, Kent.

Lennox has won all of his 21 professional fights, 18 of them with knock-outs. If he beats Razor he goes on to challenge Evander Holyfield for the world title. “My boy is meaner than a junk-yard dog,” warns his Puerto Rican trainer, Jose “Pepe” Correa, who groomed the legendary Sugar Ray Leonard.

Oh, surely not. Lennox seems far too charming, and too courteous, to be mean. “Heh, heh,” chuckles Jose, “You just wait and see, I don’t mess with losers, lady.” Behind Jose, Lennox sits examining long, sensitive-looking fingers that have emerged from the gloves he has worn for a sparring bout.

“I’m getting ready,” he says in an accent that is mostly Canadian, “to go into the ring with one of the toughest men I’ve had to fight. Boxing can bring the sort of fame and money certain fighters like Tyson found difficult to handle. I won’t have that problem.

“I’m the son of a mother who has brought me up to have respect, to have a set of values that have to nothing to do with money. I spend very little although I will buy my mother a house if I win.”

In 10 years’ time, he claims, he’d like to be married. “I’d want to have about eight children and bring them up in a clean, civilised country, somewhere like Sweden. I make it a rule never to discuss my relationships with women, but I can tell you the type I’ll want to marry. She’ll be someone I share my thoughts with, very feminine, they’re the best home-makers.

“I have two heroes,” he says. “My mother and Muhammad Ali. No matter where you travel in the world you hear his name spoken with love and pride. I’d like to follow in his footsteps.” However, love and respect have very little to do with the sound of crushed bone and faces that have been reduced to lumps of raw meat.

Boxing is not a spiritual experience. It’s a crowd roaring for a knock-out blow to the head. Look at the dreadful injuries Michael Watson suffered. “It’s also a skill,” Lennox argues. “Like any sport it needs training and commitment. But I know what you’re saying. ‘Why am I going out there to let a guy try to take my head off?’

Because a title fight will make him millions. “Nothing wrong with wanting to be financially secure for the rest of your life. But it is more than that. Winning the title for Britain would be an awesome thing. I’d be the first British contender this century to have made it.”

If Lennox did win, then waiting for him would be that other challenger, currently residing in an Indiana jail. “Tyson? Sure. He’ll still be young enough, if jail doesn’t wreck him, and he keeps in shape.”

Of Frank Bruno, Britain’s lovable loser, Lennox once said: “Frank is better suited for panto than a boxing ring.”

He says now: “That sounds too harsh, and it wasn’t meant to be. Frank’s a good boxer but he has never won a world championship, and I’m only interested in winners.”

A British world heavyweight champion – it’s quite a dream. Would he also wish this for the sons he might have? The soft contours of his handsome face crease in a smile. “No way. That’s part of my life’s mission. I’ll do it so they won’t have to.” 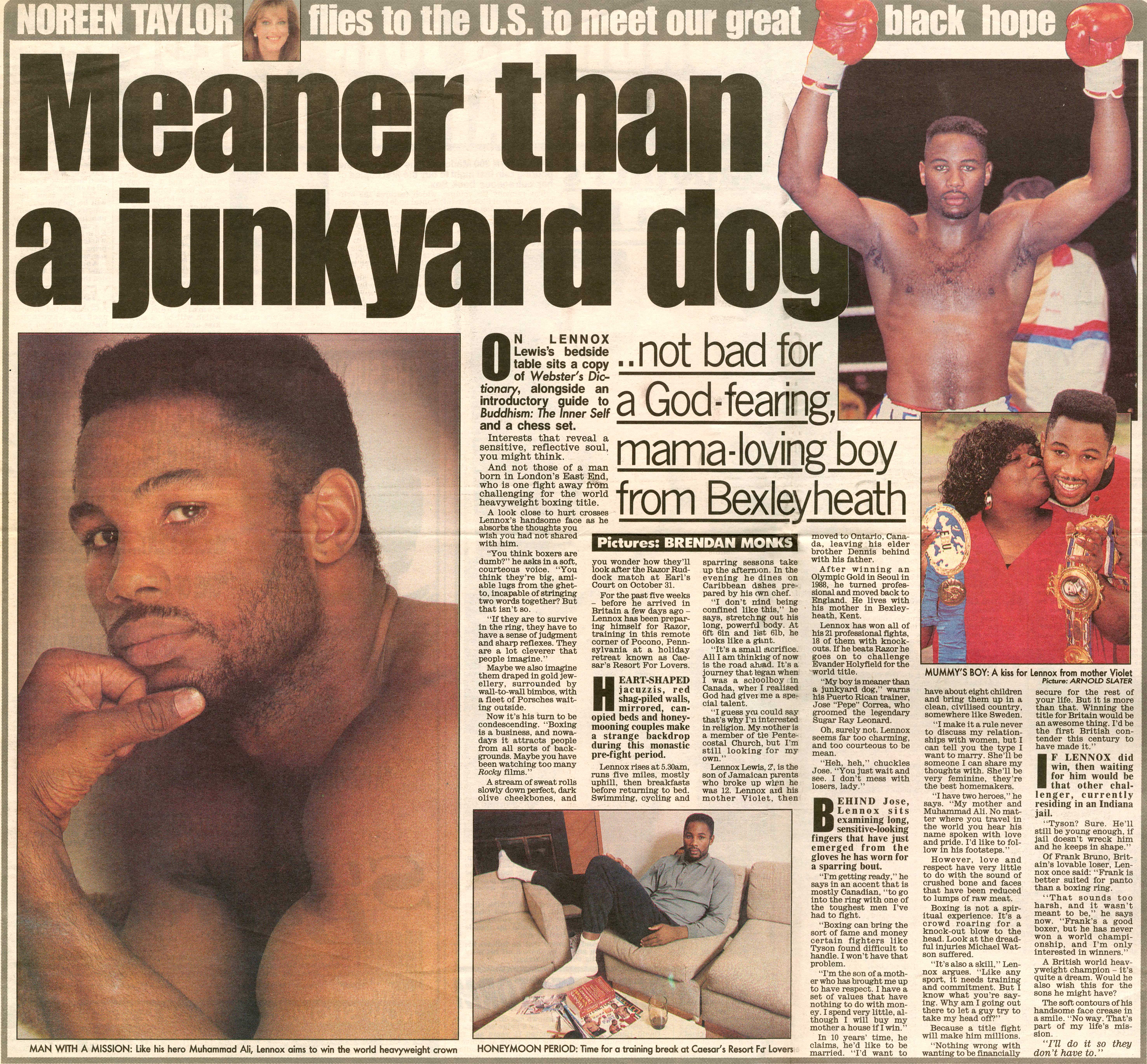