From within the large, formal drawing-room of the stately 17th-century house, a frisson of anticipation among the staff heralds the arrival of a tall, slim figure, expertly groomed, and fetchingly dressed in a pale blue suit. “The President,” announces a protocol officer, as Mary McAleese, the eighth President of Ireland, smiles, shakes hands, and asks for water in preference to the tea and coffee laid on a silver tray.

“I’m ready when you are,” she says, settling into a chintz armchair and pointing to the sheet of questions she has agreed in advance to answer in her first interview for a British paper since her inauguration last year. Her first official visit to London begins tomorrow, after a successful tour of the Irish diaspora in Australia and New Zealand.

That trip is the reason for various Antipodean television crews snaking their cables across the hand-woven Donegal carpets which cover gilded rococo corridors and rooms. I was already aware that her demeanour – polite, cool, to the point – is a convenient cloak worn while performing the role of head of state, and that she is also notably chilly in press encounters.

With family and friends, and with the crowds who surround her during public engagements, she is a much warmer, more accessible figure. But our meeting moves easily and pleasantly from one mood to the other. As achievements go, I suggest that being elected President of one’s country surely surpasses almost any other. To wake up every morning and find oneself resident of a grand house set in Dublin’s Phoenix Park must be a pretty heady experience.

“It’s still a source of wonder, and life has changed very dramatically,” she agrees, but stresses that it isn’t without sacrifices. “At the simplest level, my family have had to give up a largely private life, and a beautiful house.”

Her husband, Martin, felt it necessary to sell his successful dental practice in order to travel and support Mary in her role. Their three children — Emma, 15, and 13-year-old twins, Sara-mai and Justin — have also had to face some difficult changes. The greatest of these are the special joys which stem from the extended families and the community network which is still common in Ireland, north and south.

“We lived a very clannish life, close to my brothers and sisters, running in and out of one another’s houses. On Saturdays, we never, ever closed our front door.”

It’s difficult to conjure up that image in a room which, except for the fireplace laid with turf, wouldn’t look out of place in an English palace. It was, after all, once the official residence of the Viceroy.

“This house is a repository of both British and Irish history and heritage,” she says. “I think it is imperative that we are mature enough to recognise that we cannot change our history, particularly in the wake of the Good Friday Agreement, which was predicated on the need for us to respect the two cultures, and provide space for them.”

As the first Irish President chosen from the Six Counties, as people in the Republic refer to Northern Ireland, she has had vivid personal experiences of the clash between those cultures, and the background of violence and bigotry. Mary Leneghan, 48, was one of nine children born into the family of a publican in the Ardoyne area of North Belfast.

There she witnessed at first hand the disadvantages of growing up as a Roman Catholic in an Orange supremacist state. When she was 19 her family were forced to flee. “We had to leave because of loyalist violence directed at our home and a series of sectarian episodes directed against my brother, who was deaf. They came to our house with machine guns and there was a loyalist car-bomb attack on my father’s business.”

Despite that bitter memory, she says: “We have to be generous and forgiving because I don’t know of any other way to a better world. I grew up in a very, very cruel place that took away people’s childhood and skewered them. It took people’s talents and kept them locked up, and it placed unnecessary obstacles in the path of progress.

“I’ve learned that the response is not to engage recriminations. We have to live together, to share. I don’t like the culture of conflict I grew up with. It was unhealthy. Life has taught me how important it is for us to learn to deal with each other in language that is not contemptuous, that we be joyful and curious about one another.”

So how did Mary surmount the problems? She explains that her parents were the kind of people who spent their lives in servitude to their children. “They knew the key to keeping their children in Ireland, to ensure they wouldn’t suffer the awful despair of us emigrating, was education. That went for the girls, too. I grew up without being gender conscious,” she says.

“The first time I ever experienced a dampening effect was when I confided my ambitions to be a lawyer to our local priest. He doubted my ability because I was a woman and I came from the wrong social class. This made me even more determined.”

The family eventually moved to Rosstrevor, Co Down, and Mary went on to study law at Belfast’s Queen’s University. She then trained as a barrister but quickly returned to academia, becoming at just 24, Professor of Criminal Law at Trinity in Dublin. She also spent some time as a current affairs journalist at RTE, the Irish state broadcaster, before becoming head of the legal studies department at Queen’s.

Outside Ireland, she remains virtually unknown. Certain Irish journalists also argue that she has been much more low-key than her publicity-conscious predecessor Mary Robinson. I suggest to her that, while people concede that she seems very nice, she seems, well, less noticeable. She frowns. “In what way?”

In London, perhaps, not many would recognise her name. “But I’m not President of London,” comes the deft reply. “And I can assure you that I’m very engaged among the Irish people. People are very open with me. They confide in me. I’m with them in times of celebration, and of grief and pain. The bombing of Omagh was one instance. I see Omagh as the final death throes of the culture of violence,” she says.

“I believe that all parties to the Good Friday Agreement were tested and remained robust, steadfast in a way that sent powerful signals to those who believe violence is the way forward.”

She argues that Ireland “is in the throes of shaking off the mantle of conflict and donning the mantle of consensus. It is a convulsive period, one which calls for the steadfastness of heart and of focus.”

Was this why she had run for the presidency?

“It wasn’t any one thing. It came out of being a northerner, of being in a position to contribute an insight particularly relevant to the times we live in. The Irish wanted a President who would be the first among equals, who would provide inspiration and who could showcase the country and provide leadership beyond politics.”

Known to be devoutly religious, she says: “I don’t really want to discuss my form of Christianity, though I can tell you that my faith sustains me. It’s a spine. When Kofi Annan [the UN Secretary-General] returned from Iraq he said: ‘Never underestimate the power of prayer.’

“I wrote and thanked him for saying that. In my own life, prayer sustains me, keeps me going through the bad times. My parents and my grandparents used it through their grim times, and all I hope and wish for my own children is that prayer will remain as important in their lives.” 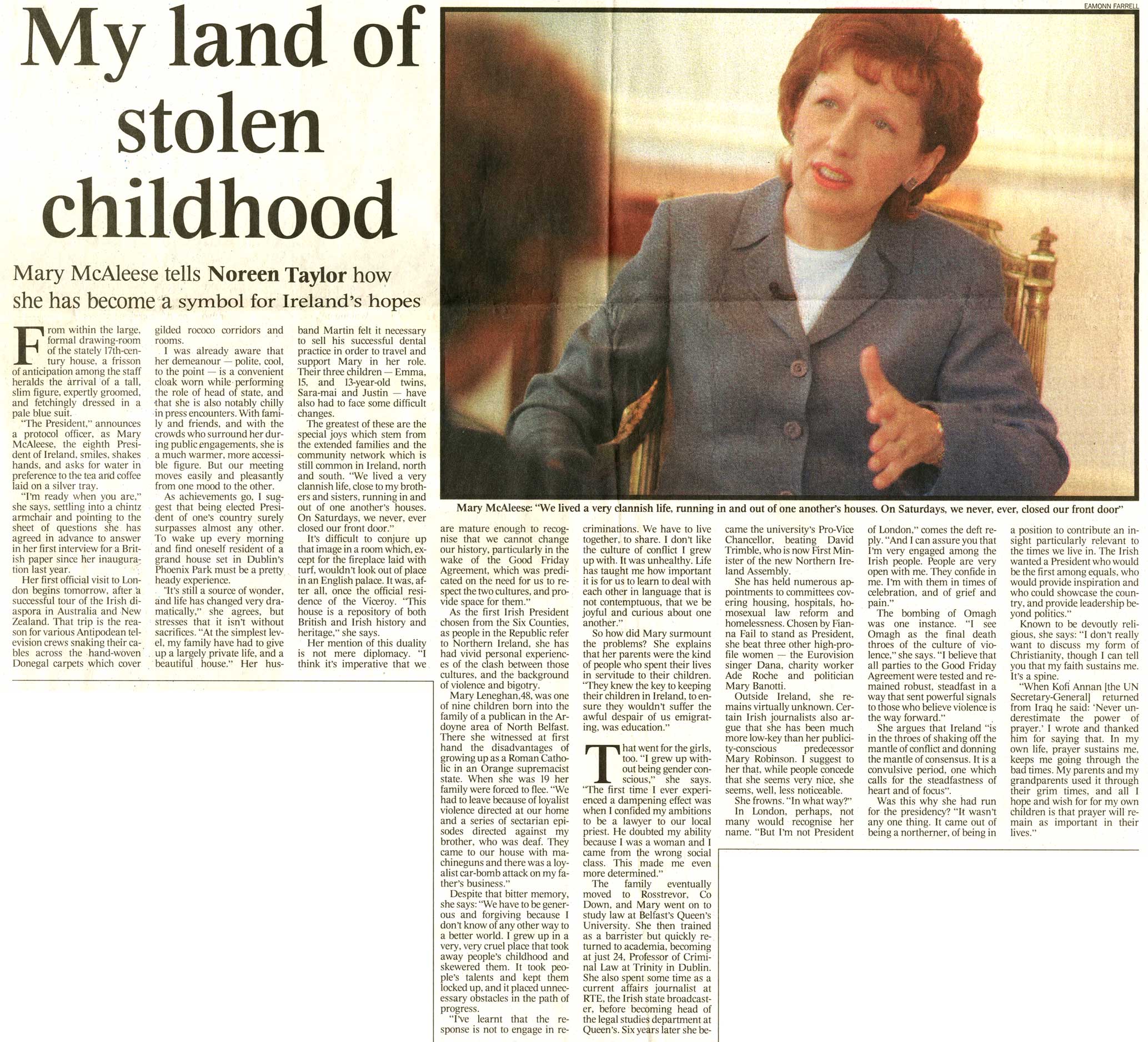