My vision for our kids – Irish president Mrs Robinson 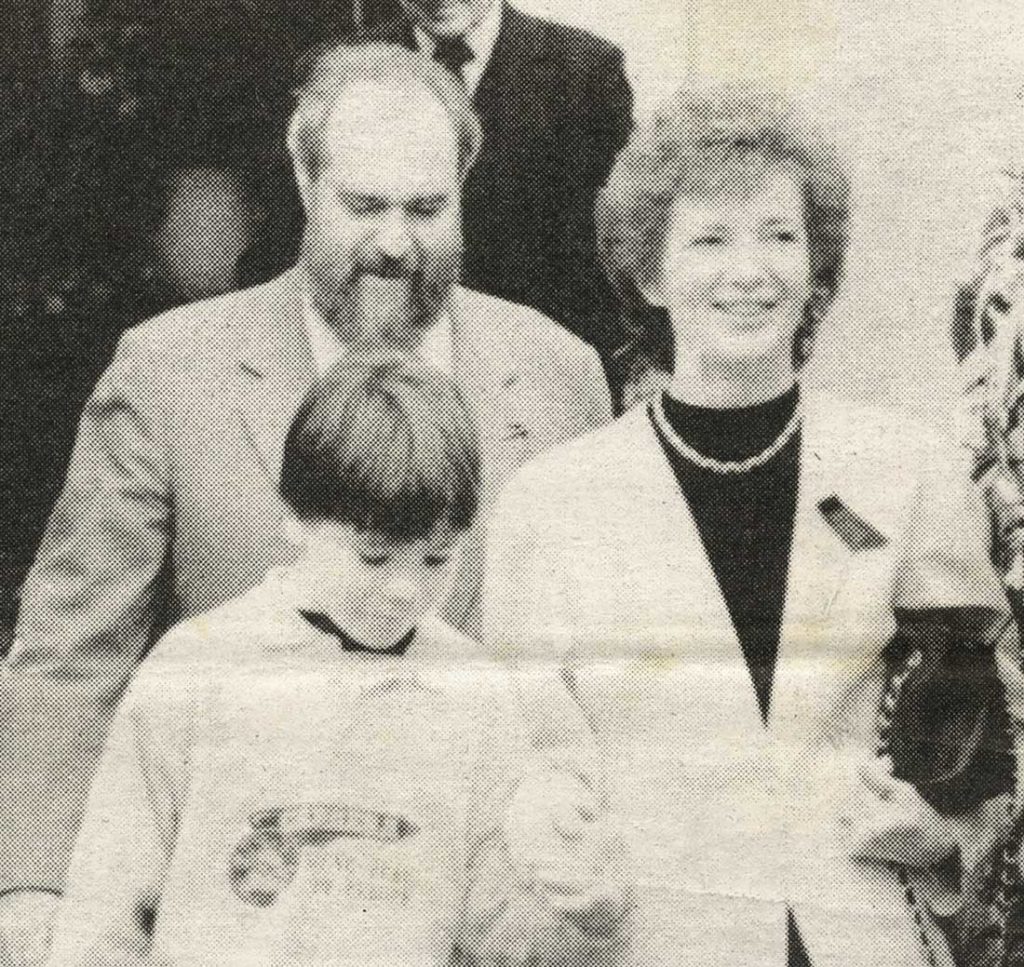 While the Irish are still trying to get used to the idea of a woman president, the woman herself has slipped into the role as smoothly as draught Guinness flowing into a glass. We met in the library of Mary Robinson’s family home in Dublin home in Dublin.

It is a large, elegant Georgian house that Mrs Robinson, her husband Nicholas and their three children will leave shortly for the presidential residence, formerly the vice-regal lodge in Phoenix Park.

“Is the room warm enough?” asked the woman who has turned Irish politics on its head. “I’ve been so busy I haven’t noticed whether the heating is on or not.” That opening remark was her sole concession to small talk, to the harmonious banter Irish women excel at.

But then Mrs Robinson is very different from most Irish women. And perhaps it was because of that difference that they voted for her and her powerful campaign slogan: “You have a voice and I will make it heard.”

Her own voice has been making itself quietly and steadily heard since she won a master’s degree from Harvard, America’s most prestigious law school. Then at 25, went on to become, Trinity’s youngest professor of law.

She was born in 1944, in County Mayo, the daughter of two GPs, the only girl in a family of four brothers. She still has the aura of a convent head girl – the type who would never give the nuns any trouble, the Miss Straight who by-passed nonsense like gossip and nclothes. Yet somehow, in Mary Robinson, that lack of frivolity is quite acceptable.

Perhaps it’s because her years as a lawyer were spent on campaigns fighting to liberalise laws that discriminated against Irish women. She has never been afraid to argue the cases for divorce and freely-available contraceptives.

Tall, slim, dressed in a sharply-tailored grey suit with a handbag on her arm, she sat straight-backed on one of her armchairs and explained: “After the inaugural ceremony that takes place in Dublin Castle on the 3rd of December. I will be known as Your Excellency.”

Until Mrs Robinson blew in, the office of Uachtaran na hEireann, the President of Ireland was largely a ceremonial, not a political one. A job composed of hand-kissing rounds with ambassadors, red-carpet welcomes for dignitaries, and the occasional tree-planting stint.

Decorative, undemanding, and rather low on job satisfaction for the brilliant Mrs Robinson. “I hope,” she said, “to use the office of presidency to enhance the role of women in Ireland. Although things are improving, Irish women do not, as a rule, have a great self-image or enough self-esteem. Yet, oddly enough, they have much to be proud of as I found when I was campaigning in country areas.

“I’d meet women who had set up further education classes. They had organised créches for themselves with great success, and without state subsidies. I felt totally at ease in their company. Sitting with them, talking over their problems and what could be done to improve their lives, form some of my warmest, happiest memories.”

Becoming the 11thpresident of Ireland must also have been a memorable night. “Being a feminist, I felt I had won it for all my sisters – all those women who have supported me. Now I have a very clear picture of how I want to use these seven years of office.

“Aras an Uachtaran, the presidential residence, is a place where people from the North, like trade unionists and other group representatives, can meet and talk in relaxed surroundings with their southern counterparts.” She asked: “Have you noticed this great arts revival that Ireland is going through at the moment?

“Our rock bands, our playwrights and film makers have earned this splendid international reputation. That is what is really going on in Ireland, you see, and as president I would hope that the president would provide a showcase or this revival.”

Mary Robinson has been compared to Margaret Thatcher, and her response has become a little bit jaded. “Of course, she has many qualities that I admire – her toughness, her political canniness but I never did identify with any of her political policies or her way of doing things.”

Nick Robinson, a solicitor heavily involved in Dublin conservation issues, is a Protestant. The one serious rift with her parents was when she married, and they refused to attend the ceremony. She said: “Although Nick has a very distinctive life of his own, he has actually enjoyed and revelled in my career.”

He has taken care of the domestic side of their life, leaving his wife free to concentrate on her legal and political careers. The curtains, carpets and furnishings in their Dublin house were chosen by him. Presumably, Mrs Robinson had neither the time nor the interest to bother with domestic detail.

Nor had she much of an inclination to bother with her own appearance, until her advisers hinted that the hair and clothes could do with an image change. As for Ireland’s image, does the new president have one wish for her country?

“I suppose it would be to stop the loss of our young people abroad. We probably have the world’s best-educated emigrants. We are losing talents that should be at home creating a new, vigorous Ireland.

“I come from the west coast of Ireland so I know all about emigration and the damages wrought by the flight of our sons and daughters.” Luckily for Ireland, this daughter did not take flight. 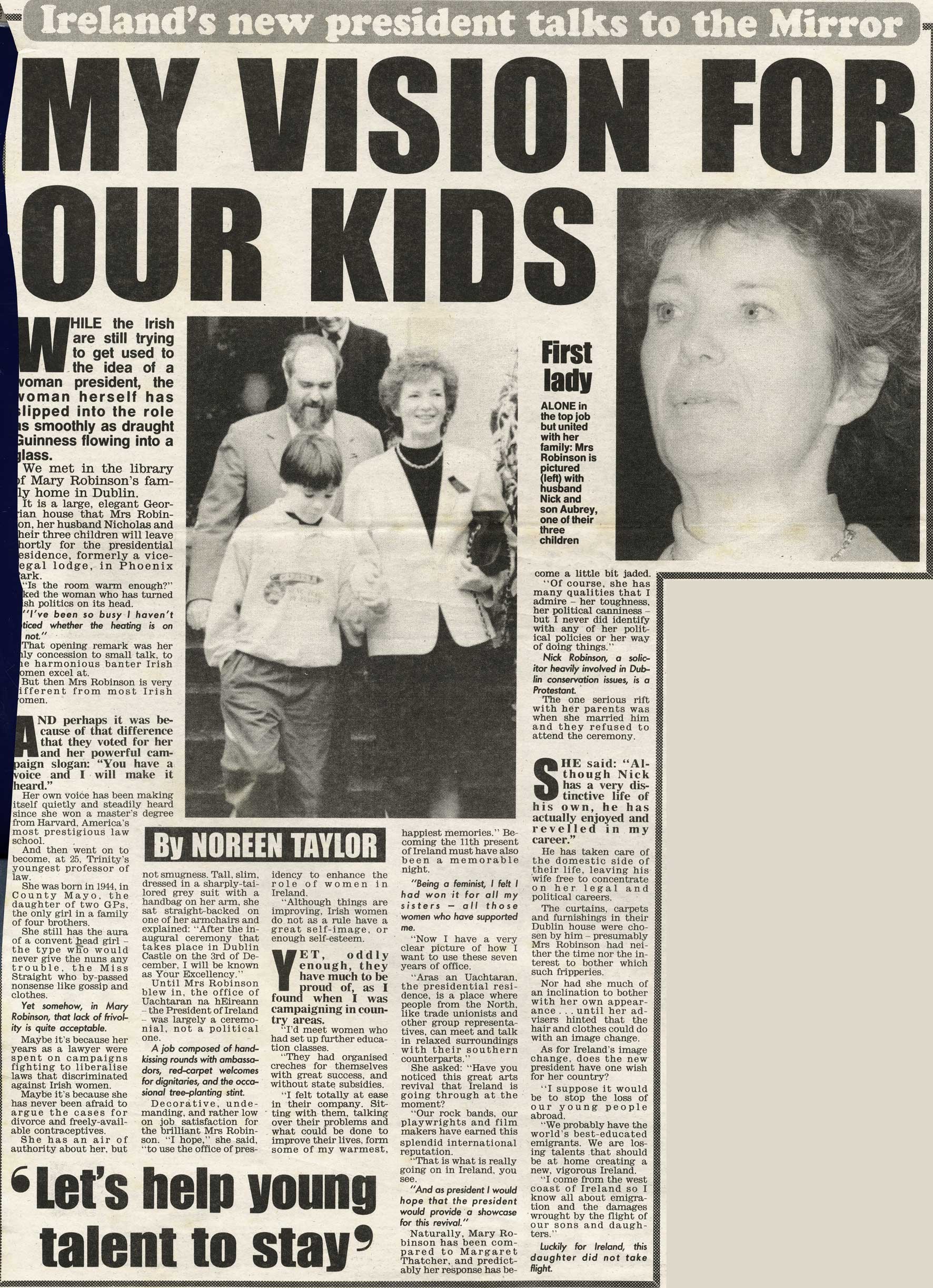