Nancy Reagan with the ever smiling face 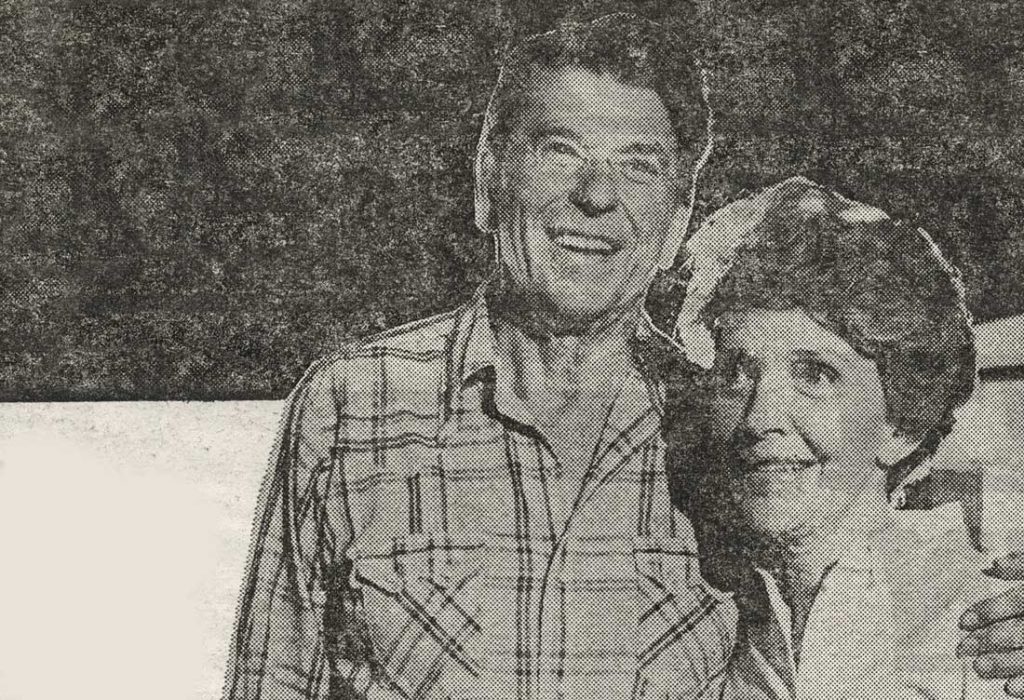 She is so scared of making a mistake she talks as little as possible. Instead, Nancy Reagan, wife of the would-be United States President, smiles. She smiles at Ronnie. With Ronnie. And for Ronnie. She smiles for the crowds, for the cameras, and for me. She smiles for all the world.

Nancy realises, as the campaign for the Presidency gets under way, that she is playing in the world’s greatest game and she has found smiling a lot safer than speaking.

The Nancy Smile is not inscrutable. It is not spontaneous. It is not warm. But it is long-lasting. And it can be pinned on and presented at will. It was groomed when she was an actress in Hollywood. Now it is turned on continuously as the “Vote For Ronald Reagan Show” rolls across the United States.

I know, because as the Reagans’ guest on their “Get Carter” campaign plane from Los Angeles to Ohio, I was invited to sit next to Nancy.

First, I got The Smile. This phoniness of the long-distance smiler is an essential part of the ploy to put Ronald Reagan into the White House.

Nancy is the sort of lady who has a disturbingly unpolitic habit of saying in public what she thinks in private.

Like the time she entered a hotel and exclaimed: “Gosh, it’s so nice to see so many white faces.” That led to so many red faces among Republican Party bosses. Now Nancy, 57, sticks to her script. And The Smile.

Her lips are bright pink gloss, her hair is lacquered into place, her eyes are bloodshot. The frenetic lifestyle of the campaign will do nothing for the looks of the ex-actress who, as Nancy Davis, appeared in several forgettable epics.

But then no sacrifice is too great in her lifelong devotion to her husband. She told me: “If Ronnie was selling ball bearings I’d still give him everything I have.” She rarely took her eyes off her beloved Ronnie who was sitting with his jacket off and glasses on reading a book.

Despite ranks of Secret Servicemen and aides constantly surrounding them, Nancy often cuddles up on Ronnie’s knee to sleep. When they walk among crowds they hold hands. And the 69-year-old Presidential hopeful calls her Mommy.

I asked if she found the strenuous campaign schedule tiring. “I feel this is important and the adrenalin keeps me going. It’s going to end one way or another, so I take each day as it comes.

“I’m not ambitious the way people say I am. I’m just rooting for my husband. Remember, I didn’t marry a politician. I married an actor. And a very thrilling and exciting life it has turned out to be.”

Then Nancy remembered the lines that could make her a star. “I’m all for those family values that were so unpopular in the Sixties. Now everything has swung back and I know there are a lot of people out there who feel like me.” And what does Nancy feel like?

She doesn’t believe in abortion unless the mother’s life is in danger. “I wouldn’t like America to go the way Britain has,” she says.

True love is next on the agenda. Nancy has said she believes a woman should save herself for true love, having one husband all her life. “It seems to me that being a wife is one of the most exciting jobs a woman can do. Of course, it doesn’t always work out that way.”

Nancy and Ronnie’s traditional family ideal hasn’t always worked out that way. He was a divorced man with two children when they met. But Nancy seems to have erased his marriage to film star Jane Wyman from her memory tape.

Nancy and Ronnie’s children – actress Patti, 27, and ballet dancer Ron, 22 – have also refused to fit into the mould of her identikit family. Patti has openly announced she couldn’t marry a man she had not lived with. Nancy said: “We are individuals. Patti and Ron are not interested in politics but they both love their father.”

Nancy doesn’t like discussing her family with the Press because “I believe that certain areas of mv life are private.”

Ronnie spent the next day in Ohio making speeches about getting Jimmy Carter back to his peanut warehouse. Nancy spent the day smiling. Of course.