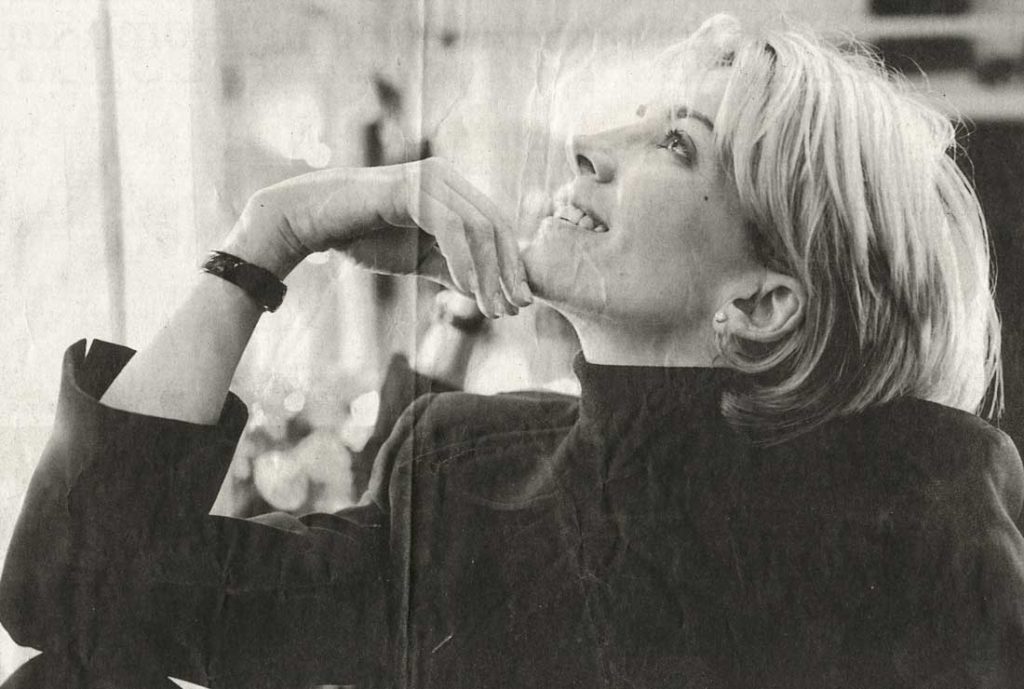 The tall woman with that so-familiar Redgrave face walks into the restaurant in midtown New York, peers around hopefully, yanks spectacles from her handbag and then sticks them on the end of her nose.

‘Oh hi,” laughs Natasha Richardson self-consciously. ‘I can’t bear wearing them and I’m blind without them.” As we are shown to the lone smoking table, she says sotto voce: “So stupid, these rigid rules. You almost expect them to erect a warning sign above us ‘Health hazard – smokers in residence!’”

No smoke could conceal Natasha’s most sparkling feature: diamond studs in her ears and another diamond dangling from a gold chain around her neck. They are, I tell her without exaggeration, extraordinary. “My Christmas present,” she admits shyly. It transpires that they were given by her film-star husband, Liam Neeson.

Straightaway I am confronted by the gross unfairness of what might be called Natasha’s image dilemma. For most of her life, she has been portrayed as Vanessa’s daughter. Now she is Liam’s wife. Truly, the resemblance to her mother is spooky. Though smaller and slimmer, the same finely drawn features stare back. For a moment, as I listen to her speak, all caressing cadences ending in trembling drifts, it could be an impersonation.

Then I realise that I am making the mistake of seeking the similarities rather than noting the differences. The previous evening, I had seen Natasha on stage playing Sally Bowles in a preview of Cabaret, which opens on Broadway on Thursday. Her compelling performance confirms that she is a gifted actress who has the ability to make us believe she is someone else.

In this restaurant, wearing one of those fashionable tight little cardigans in lilac, a black velvet skirt, black tights and kitten-heeled shoes, she is a beguiling blend of class and street. She bubbles as she describes her baby sons – Micheal, two-and-a-half, and Daniel, 18 months – and the return of stomach muscles, exhaustion and her farmhouse in upstate New York.

On stage, in a tatty basque and torn stockings, she appears to inhabit another body and speak with a different voice to portray Sally, the sad, junkie-eyed, broken woman singing in the Kit Kat Club in Thirties Berlin while clinging to her dishevelled dreams.

So vivid is the production, by Sam Mendes, that you can almost smell the stench of body odour as chorus girls in their droopy pink knickers shuffle around drunkenly, unaware of the thudding jack-boot moving ever closer. 1 tell her I really meant it when I said she was good.

“Oh, I’m so relieved. I’ve wanted this part since I was a little girl. We had the record of the film Cabaret, and I used to put on these little shows where I’d mime to Liza Minnelli singing.”

Had she always wanted to be an actress? “Yes, yes,” she nods vigorously, “as long as I can remember. It’s my vocation. I’m completely driven, not for box-office stardom but for work that I believe in. You can say it’s in the blood, that it’s inevitable coming from my background, and sometimes I wonder, but I don’t have any answers.

“All I know is that I’m very hard on myself. Though my name opened doors, it didn’t get me work, and a lot of pressure comes from having a mother who is considered one of the greatest actresses of her generation.”

The drama dynasty of the Redgraves is to acting what the Rothschilds are to banking and the Windsors to ruling. Natasha, now 34, is the elder daughter of Vanessa and the film director Tony Richardson, who died of Aids. Her grandparents – the theatrical knight Michael Redgrave and his wife, the actress Rachel Kempson – were fine actors. Her sister, Joely Richardson, uncle Corin, aunt Lynn and cousin Jemma all act.

Then, four years ago, she married Neeson, a star who now outshines all the Redgraves. “Perhaps that’s part of the reason why I love living in New York, being free of all that family baggage, being open to all sorts of possibilities.

“You can make your own life here, although there are sacrifices, like missing London, family, friends, my supply of Tetley teabags. You do have to get used to these silly rules about smoking and the fact that New Yorkers are people who live to work, instead of working to live.”

Her life could not be more different from that of Sally Bowles, yet she says: “I can identify with a lost girl like her who took risks.” Really? Can she understand the anguish of the self-destructive Sally? “I can identify with pain for many reasons. I wasn’t brought up in some rich, limousine childhood.”

Well, Vanessa did give away most of her money to causes she deemed worthier than a luxurious domestic lifestyle. But Natasha isn’t thinking of cash. “Believe me, there have been enough experiences in my life to draw on. Many of them I can’t share with you because my family aren’t exactly anonymous people.

“Because of my mother’s political involvement when I was young, the whole world seemed to be against her and, at times, it seemed as though she wasn’t primarily concerned with her family, but her causes. Then there was my father dying of Aids, and the collapse of my first marriage. Those experiences are the ones I use in my work.”

Her 15-month marriage to the producer Robert Fox ended after she met Neeson when they starred together in Eugene O’Neill’s Anna Christieon Broadway. At the end of the run, she followed him to Poland while he filmed Schindler’s List. Clearly it was that kind of swept-off-your-feet love, impossible to fight, which devastated Fox so badly that he later spoke at length in public of his heartache.

“I know,” she says. “And I so wish he hadn’t talked about us. I deeply regret that he did so. All I can say now is that I still love him and that we’re friends again.”

These words, although delivered with a polite formality, doubtless cloak a seething mass of emotions. Then again, membership of the Redgrave family comes with an in-house instruction pamphlet on how to sidestep sensitive questions, such as the subject of Liam. A here-we-go-again look floats across her face when I mention his name, but once she is on the subject there is no hiding the depth of feeling that breaks through her understandable caution.

“Liam and I come from such diverse backgrounds, yet we’re soulmates, deeply connected to one another with love and understanding. We’re each other’s bedrock. We suffer the same stresses while enduring the separations.

“He is in London rehearsing his Oscar Wilde, so we haven’t seen each other for nine weeks. It’s terrible. It wasn’t meant to be like this. Liam had arranged his whole schedule to be here to support me through Cabaret, then dates changed and everything got mixed up. It’s inevitable, I suppose, being in the same profession.”

Through Liam she has discovered Ireland and the Irish. “I love going there with him, sitting at home with him talking to his three sisters. Liam is still very much an Irishman, very proud of his country. We go over twice a year and we’re thinking of buying a house in either Galway or Wicklow.

“Giving birth to Michael in Dublin, I can’t tell you how wonderful that was compared with the experience of having a child here in America. We didn’t plan on having them so close together. It was an accident, though now I look at these two little people playing together and I feel so lucky.”

Hers does seem like a golden life, so why is she shaking her head in disagreement? “There are times when I think I could agree with you, but most of the time that’s not how I experience life. I wish I didn’t take things so seriously, that I could lighten up occasionally.

“My father’s death was the unhappiest time in my life. He really believed in me and I loved him so much. He was only 63.1 don’t think I’ll ever get over his dying and, in a way, I don’t want to because then he would grow dimmer. So, there’s no escape. And although you’ve said kind things about my work, what I’m concerned about much of the time is how I look. I know I come across as confident because I’m good at covering up my insecurity, which is terrible.

“I have very low self-esteem, which comes from being an overweight teenager, and I’m stuck with that self-image. One of the lousy things about this profession is that it constantly forces you to examine yourself, to look in the mirror, to be concerned about age.”

What does marrying a man often described as Hollywood’s most desirable star, who previously dated some of the world’s most talked-about women – Madonna, Barbra Streisand, Brooke Shields, Helen Mirren, Julia Roberts – do for such insecurities?

When their relationship became public, one of Hollywood’s female reporters suggested that “lucky” Natasha had carried off Neeson, never considering that she might have been the one carried off.

“I suppose she meant that women everywhere love Liam. Well, I don’t suffer from jealousy, so all I can say is that they have great taste.” 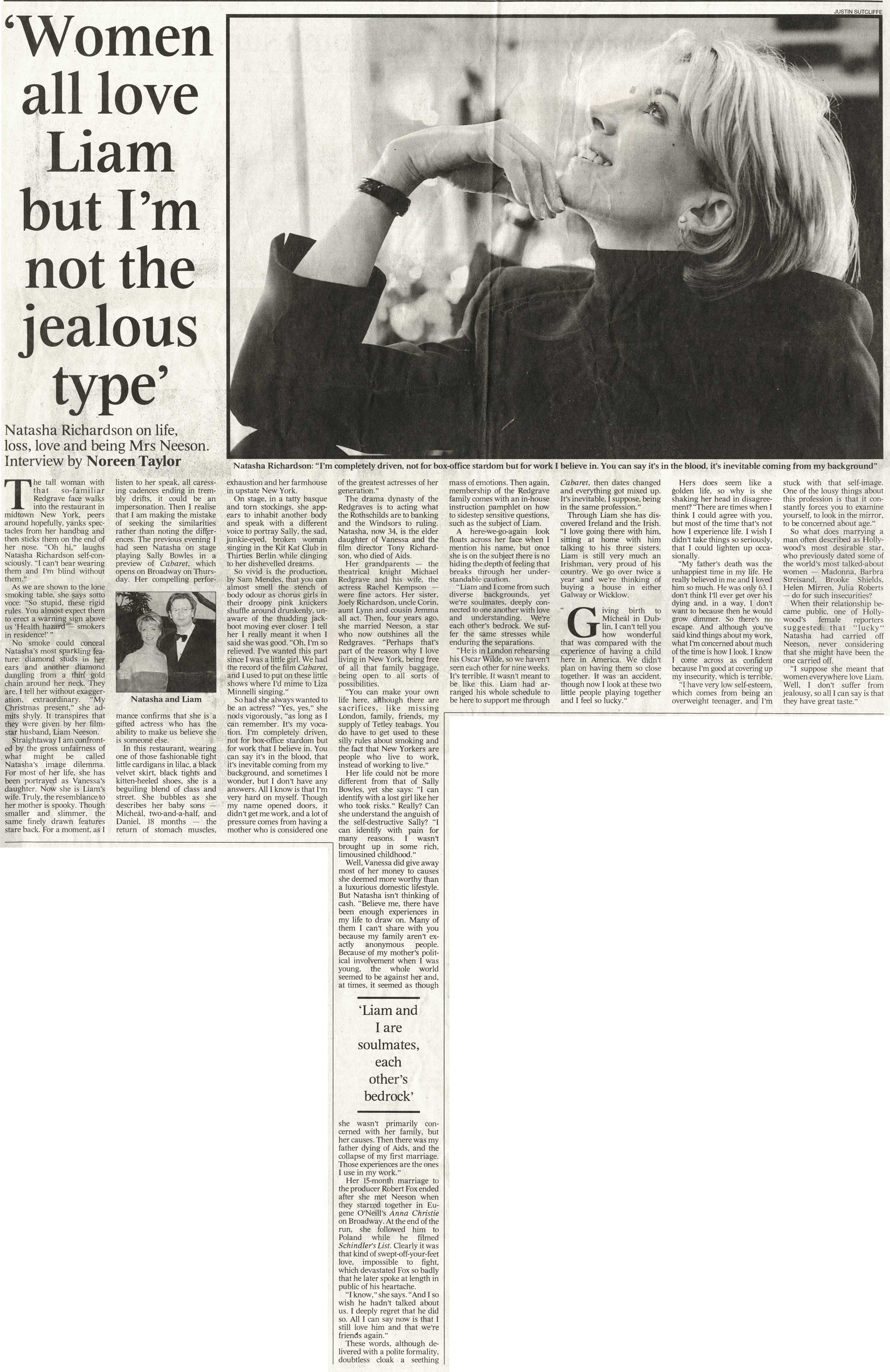