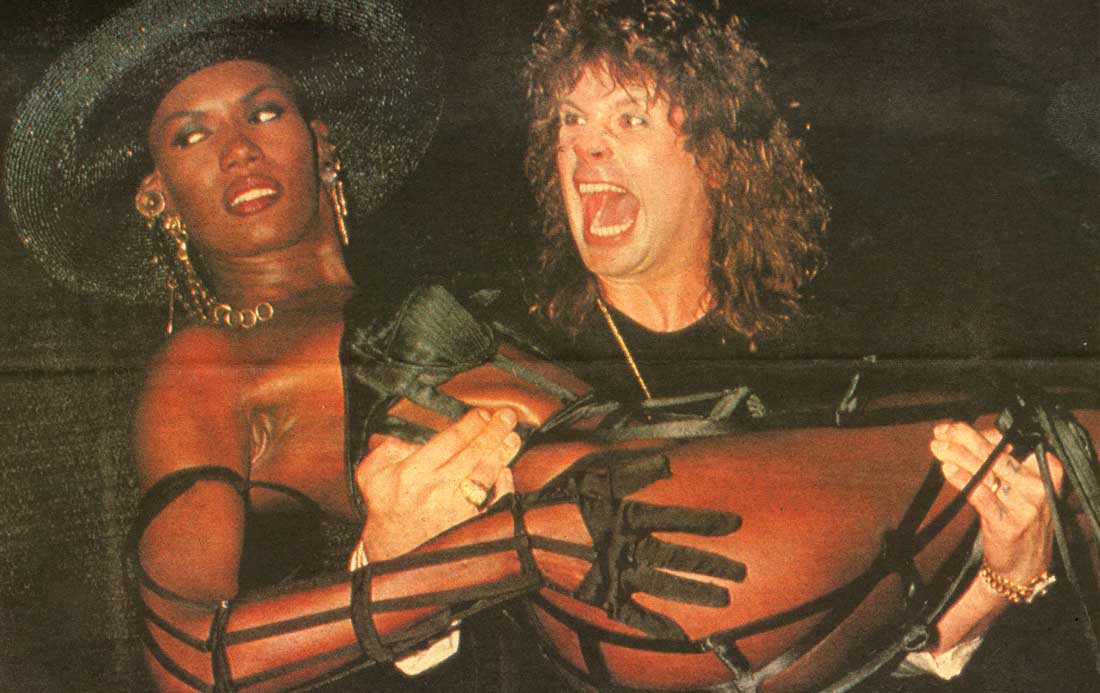 When Sharon first met Ozzy Osbourne and the Black Sabbath band 20 years ago she was the rich, rather spoilt 17-year-old daughter of top showbiz manager Don Arden.

“I was working as a receptionist in my father’s office, when in walked this weird-looking crowd led by a bare-footed man wearing a bath tap on a chain round his neck. That was Ozzy.

“They plonked themselves on. the floor and I was terrified. I ran to find the other receptionist because I didn’t want to deal with these creatures. I couldn’t even bring myself to do the usual thing like offer them tea or coffee.

“I wasn’t into heavy, metal. I knew nothing about alcohol and drugs. In fact, I was twenty before I even stepped inside a pub.”

Little did the privately educated, cossetted teenager know what was in store for her. When Sharon and Ozzy met again in 1976, they fell in love. “He made me laugh,” she says wistfully. “I knew he was an alcoholic. Just as I knew I was going to save him. I was the woman who would make him change.”

At that time, Black Sabbath had sold millions of albums around the world. But through greedy management, Ozzy was practically penniless. “We lived in a tiny flat with four suitcases, and we were so happy. I got his money back for him eventually,” she says.

“Ours was an amazing love. We couldn’t bear to be parted from one another then.” Two years after their romantic wedding ceremony in Hawaii, Ozzy checked into the first of many alcohol abuse clinics.

“I had started drinking to keep him company,” says Sharon. “Then I realised I didn’t like not being in control, so I stopped. And I couldn’t understand why Ozzy couldn’t stop.

“I was so naive, I thought he should check into the Betty Ford Clinic so he could learn to drink properly. Wouldn’t it be nice, I thought, if he could have a couple of vodka tonics, get a bit merry and then come home?”

Sharon was only beginning to understand the extent of her husband’s sickness and the depths he would sink into. “He would disappear for weeks and I would be combing the world looking for him.

“When he was on tour I would be ringing Tony, his assistant, three times a night checking that Ozzy was sleeping on his side, not his back, in case he choked.

“Groupies? I was never bothered by them. If I had found a woman’s telephone number, or learned that Ozzy had dated someone, that would be a different matter. But women like that… I feel sorry for them. They are used by men like Ozzy, and then forgotten the following morning.

“All rock stars are the same. And rock wives who believe otherwise are very naive.” She says she doesn’t understand why men like her husband have to bed stranger after stranger, but you believe her when she shrugs and claims it is the least of her worries.

His drinking and cocaine usage have affected so many areas of her life. “I had to stop socialising,” she says. “I couldn’t go to dinner parties, or invite anyone into the house because I was too embarrassed.

Ozzy wasn’t funny anymore, he was an aggressive pest. “I remember sitting at a dinner party one night and kicking him under the table. ‘Sharon,’ he shouted back, ‘why have you just kicked me on the knee?’”

Sharon began to stay at home. “The strain and tension made it not worth going out,” she says. “My looks suffered. I started over-eating. I stopped wearing makeup. My self-esteem was at its lowest. Then

one day, I caught sight of this fat, dowdy woman in the mirror. I thought, Sharon, why are you doing this to yourself? He’s the one with the problem, not you.”

The only area Ozzy’s problems did not affect was her work. “He is  proud of my success in a way. In another way he resents it. But if I had not had my work I doubt if I would have survived.” And survived she has.

The 300-year-old house that once belonged to actor Dirk Bogarde feels and looks like a well-run stately home. There are two nannies for the children. A gardener tends the 18 acres of lush Buckinghamshire fields and lawns that lie behind the high, white electronic gates.

Sharon says: “I’m blessed in many ways, don’t you think? Ozzy will never end up in the gutter because we will always be financially secure, unlike the other families I’ve met through Alcoholics Anonymous.”

Ozzy is now 40, and he has been sober since that awful night in September when he tried to kill Sharon. Yet, Sharon knows it is far too soon to dream of a normal life. “You know, I still cannot bring myself to tell Ozzy step by step what happened that night. And he can’t remember.

“During the previous two weeks he was in a 24-hour-a-day alcoholic stupor. At the moment we are both walking on eggshells. When he comes home from the clinic at weekends, the atmosphere here is very sensitive, delicate.

“He finds it too difficult to open up and talk. In our marriage Ozzy has always been the romantic, while I’ve been the practical one. Maybe now I’m being romantic, hoping that he’ll get better.

Not for me, or for the children, but for himself.

“He has got to want to survive. But how do you get someone to want that?” She can’t, of course. All Sharon can do is hang in there and hope that one day soon the pain that her husband tries to obliterate through the bottle will somehow disappear. It is a faint hope. But what else has she? 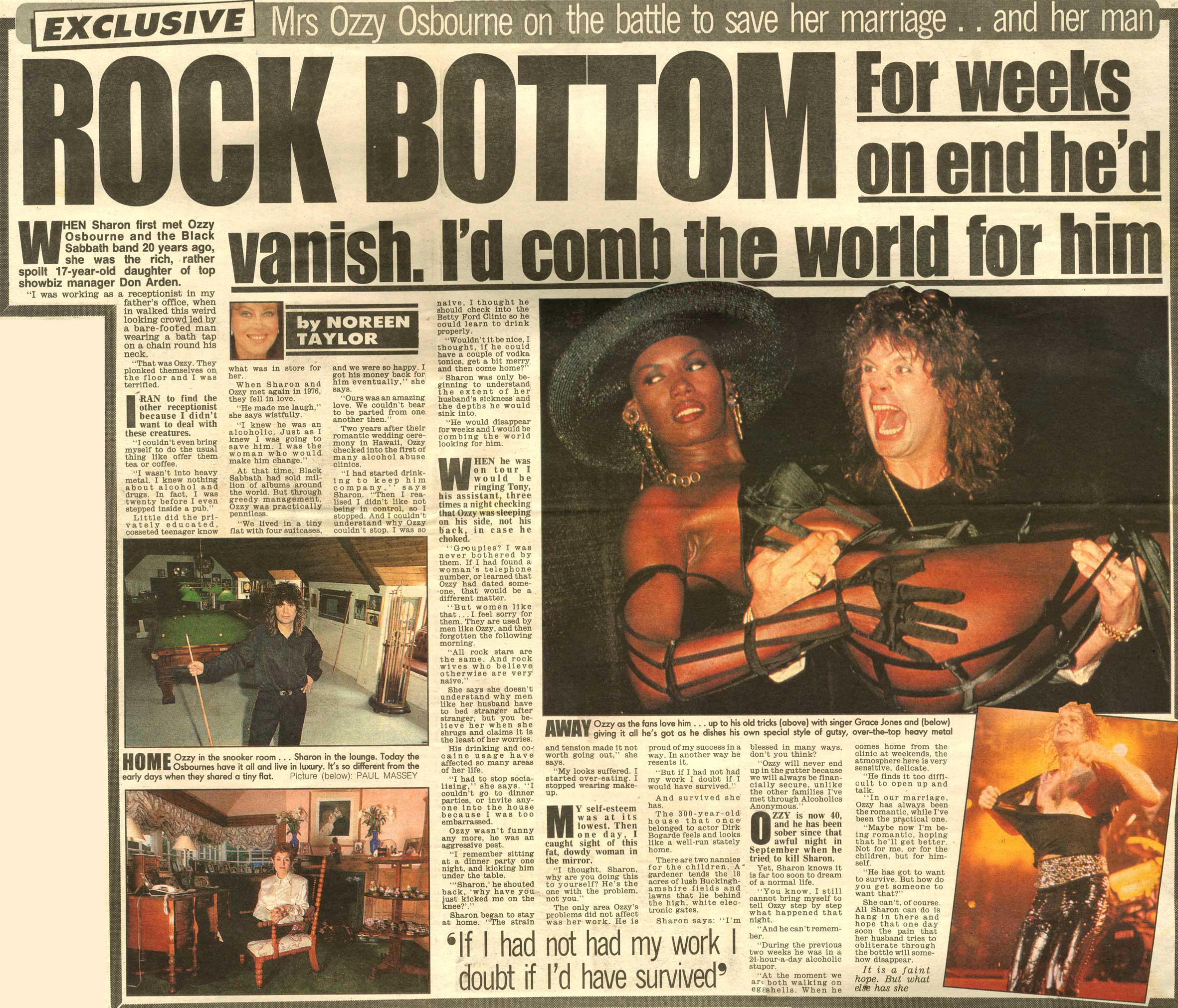