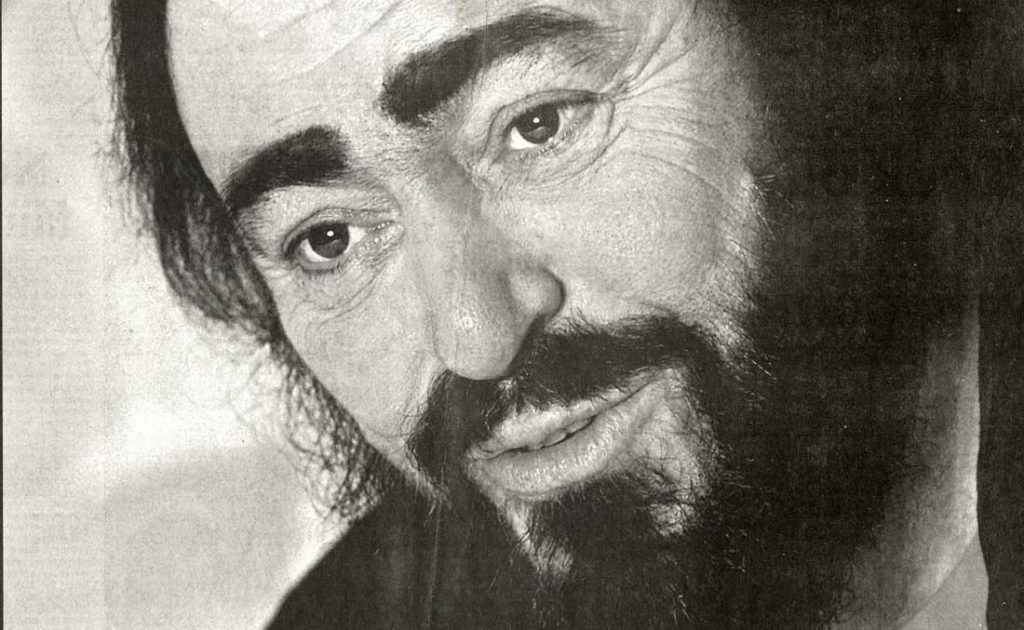 First there is the bulk. Luciano Pavarotti is dressed in a loose pink shirt that hangs over pale trousers — clothes designed to camouflage a protruding stomach as cumbersome as a full-term pregnancy.

And then there are the hands: beautiful, delicately sculpted, sun-tinted, with perfectly buffed nails. Such youthful hands for a 62-year-old. They are holding a mobile telephone, which has all his attention. He fondles it, strokes it and stares at it.

“My Nicoletta,” he says with a soft moan, his chin cast down on his chest. “She is not with me. She has gone to Sarajevo today, gone alone, without me. I did not want her to go because we are never apart. But we created a music centre there and she has left with 50 blankets and presents for 300 children.

“You do not mind if I leave this switched on? She promise [sic] to ring the moment she arrives to say she is all right. We are together 24 hours a day all the time. I put my hand out at night to find her, and if she is not there because she has gone to sleep in another room… I’m like…” He makes a startled motion to demonstrate panic.

“Now, without Nicoletta, I’m frightened. We are never bored with each other. She’s very clever, a marvellous conversationalist and also a doctor in the natural sciences.” He almost sings her name: “Nicoletta! She makes an enormous difference to my life.”

Indeed, his relationship with Nicoletta Mantovani has created a difference to the lives of everyone around Pavarotti. The family is engulfed in the kind of traumatic drama that wouldmatch any operatic plot, as intense as any role the world’s best-known tenor has performed on stage. Nicoletta, his 28-year-old former assistant, has replaced Adua, his former business manager and wife of 35 years, as his prima donna. Now Pavarotti’s three daughters — Lorenza, 35, Cristina, 33, and Giuliana, 30 — are a little anxious about their roles as supporting players.

The singer’s hardcore fans, so at ease over the years with a well-loved cast, talk of little else but the winds of change in the life of their beloved Luciano. Pavarotti met Nicoletta four years ago when she was a student, working briefly as hostess at Pavarotti’s annual horse show in his native Modena. So, what attracted him to this daughter of a local government finance officer and a bank manageress from Bologna? He shrugs helplessly: “All I can tell you is that I trust her.”

Anyway, she soon became indispensable to him and joined his travelling entourage as his assistant. “Before I met Nicoletta it was not a good time. I had a smiling face, but inside I was not happy. I was surrounded by people, but I was lonely, and the worst loneliness of all is in the crowd.” He stares at the mobile phone again, willing it to ring.

When it does, we both jump, and then rapture lights up his face. The large body visibly relaxes and I can almost feel the stress evaporating. After a short conversation in Italian; he beams happily: “Now I’m calling the mother and father to tell them she has landed.” He cups his hands over the phone and whispers conspiratorially: “They are both younger than me, you know.”

While he talks, 1 recall a conversation I had moments before in the lobby of the sumptuous Hotel Vesuvio in Naples, where Pavarotti is performing Nemorino in Donizetti’sL’Elisir D’Amore. A Frenchwoman had noticed me reading an old Pavarotti newspaper clipping and leant forward to ask if she could have a copy. She and her five friends follow Pavarotti around the world, attending every concert and every opera.

The maestro knows them and meets them at stage doors, although it is Nicoletta who spends time talking to them. “I’ve told Nicoletta that I am the same age as Adua and that I’ve lost my husband to a woman of her age,” the woman confides. “She is very sympathetic, but I think she is a young woman who knows what she wants. But who can blame her? What a man! Those hands! That voice and those eyes. I love him!”

Really? Sitting across a dining table in Pavarotti’s suite (once home to Enrico Caruso), I note the lacklustre black hair lying flat across his scalp, the result of constant hair dye. And, once more, the sheer size of him. As he slowly pads around the room, it seems like a painful exercise. I also note an armchair standing on a 2ft platform, obviously constructed to alleviate the discomfort of lowering himself to ordinary chair level.

Excitable, easily distracted, there are many plots being hatched in his head, although he gives the impression of a kindly archduke in command of his court. Bonhomie positively bubbles from each pore of his golden skin. This week he appears in London and Birmingham, singing Verdi’s Requiem, and says: “Oh England, England. I’m proud to perform there, an honour…”

I ask how Nicoletta copes with her new life, with his life, the constant touring, the adulation. After all, she hasn’t taken on only a man, but an institution. “I only wish she were here so she could tell you herself. Well, she is still trying. It’s not easy. She and my daughters have still not adapted to each other. I am sorry for all of them. It’s very difficult, very, very hard. What can I do?”

He opens his hands in another gesture of helplessness. “My daughters are like my mothers. ‘Daddy do this! Daddy do that!’ I’m their little boy. I’m always the boy inside.”

His smile disappears when I mention the death of his friend, Diana, Princess of Wales. When I look up from my pad, his head is resting on his arms and, after a long, melancholy moan, he lifts his face to betray red eyes and tears coursing down his cheeks. Later, when calmer and distracted by other calls, I ask about Adua, his abandoned wife.

He stiffens and looks into the distance. Perhaps, I suggest, it is easier for men to close one door and walk through another to embrace a new life. But, after all, it was 35 years. “We had closed the door already, so it was not like that with us,” he says. “We closed it together many years ago, and it wasn’t only my decision. We were never together.”

Does he feel guilty? “No, I do not feel guilt. We have been separated for a long time.”

Then why, after Pavarotti’s public announcement of his love for Nicoletta, had Adua written an open letter to a newspaper in which she described, rather touchingly, the great man’s need for the sustenance of a tested relationship? Especially in the future, during those sunset years when the spotlight eventually shuts down.

He examines his nails for a long time before replying: “Even though I was not happy with my life in that area, I was not looking for love. I believe in fate. How else can I explain the way I live now? With Nicoletta, we rise late when I am performing because I never go to bed before three. Then I have the gymnastics. Then lunch. We never go out during the day, either, because it’s too cold, for the voice you understand, or because I’m going to be recognised.

“Yet there is another part of me that likes to play the great patriarch. Like today, when I have ten members of my family around me for lunch. I love that, too. Maybe because I was brought up surrounded by people. I’m the first boy to be born in my building for decades, so throughout my childhood I am surrounded by love, praise, attention, from parents, grandparents, even great-grandparents, because they were only 58 when I was born. I wish all children were blessed with such riches.

“How privileged I was to have such a foundation, and such audiences. Throughout my life I’ve had an audience. When I was four, I jumped up on the kitchen table and said, ‘I’m a little tenor like my daddy’ and sang La Donna e Mobile from Rigoletto. But it was my mother who recognised the voice. When I was studying to be a gymnastics teacher, my mother say to my father, ‘forget about the teaching, he’ll lose four or five years. He has to train his voice. It’s special.’ From 1955 to 1961, I studied with Arrigo Pola and then Ettore Campogalliani.”

These names are so important he writes them down to avoid spelling mistakes. Like many gifted people, he is neither dazzled nor surprised by the heights he has reached. The voice was given to be appreciated, and he seems quite accepting of the phenomenon that is Luciano Pavarotti.

He never for sings for pleasure, never during family gathering and certainly never in the bath. “Are you making a joke?” he asks, astonished, and pointing to his throat adds: “This is work.”

What makes him special, he’ll tell you, is his ability to reach out, to make his emotions felt at the back of the auditorium. From his first significant performance in Liberty, Missouri, he knew this to be the case. “God gave me a quality that reaches out to the masses, from that first concert with 400 to the 300,000 in Hyde Park. I was never looking for fame, never jumping out in front of someone, not even now when I’m performing with the three tenors [with Placido Domingo and Jose Carreras]. I’m not ambitious like that.”

What about money? “For these past 15 years I’ve been making money, but I give much of it away. From every concert, I give something to charity. Let me describe what money means to me. I’m here at the Vesuvio, one of the prizes I give to myself, where I can sit at the open windows on a hot day and look out at the Bay of Naples, at the people walking past.

“Like my apartment in New York when I sit at the window overlooking over the city. Money makes living in prison pleasurable. To be famous is to be a prisoner. Always! You understand?”

“The way I look,” he says sadly, “you don’t forget me. I’m a chubby boy.” He pushes the chair back from the table and gazes down at his body in a way that stirs pity. Does he have to look like this? He has a dietician in his entourage, and Nicoletta, who constantly pleads for him to eat less.

“I’ve lost ten kilos, but I have to lose more. I didn’t always look like this. I used to be an athlete, a footballer, strong, you have to be in order to be a tenor. Muscles like this, I had.” He flexes his upper arms.

“When I stopped playing football I didn’t stop being greedy. I kept eating the same amount. That’s when the trouble started. I’m not dysfunctional, I was just greedy. These days I don’t think I eat very much. I’m not crazy for sweets or fat, I don’t drink wine. I have some pasta, with a little olive oil, some tomatoes, cheese.”

He shakes his head, apparently bewildered by the circumstances that have trapped him within his unwieldy frame. “God gave me luck, health, a voice and certain intelligence. But if I could live my life over again, there is one thing I would change. I would want to be able to eat less.” 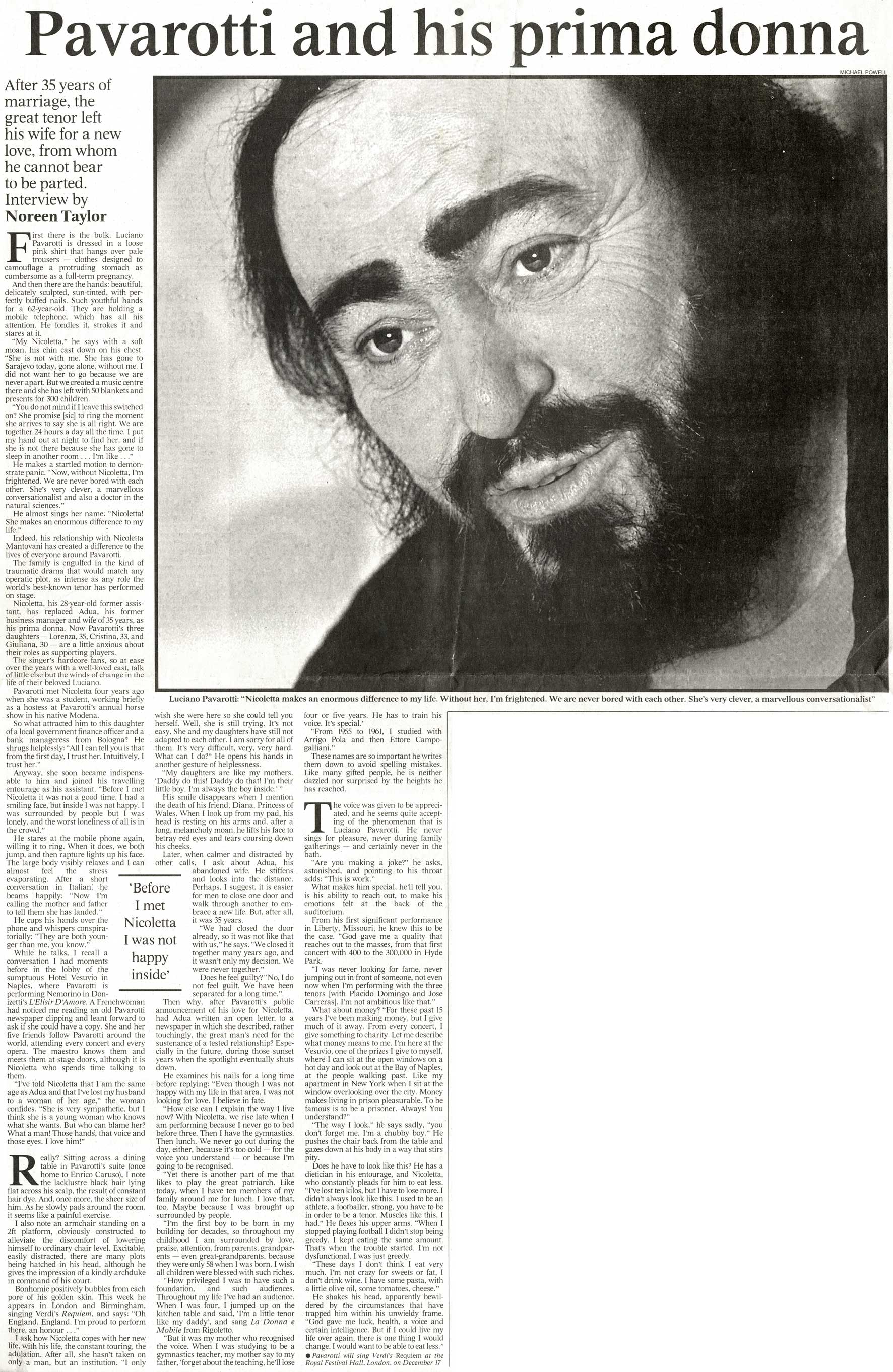