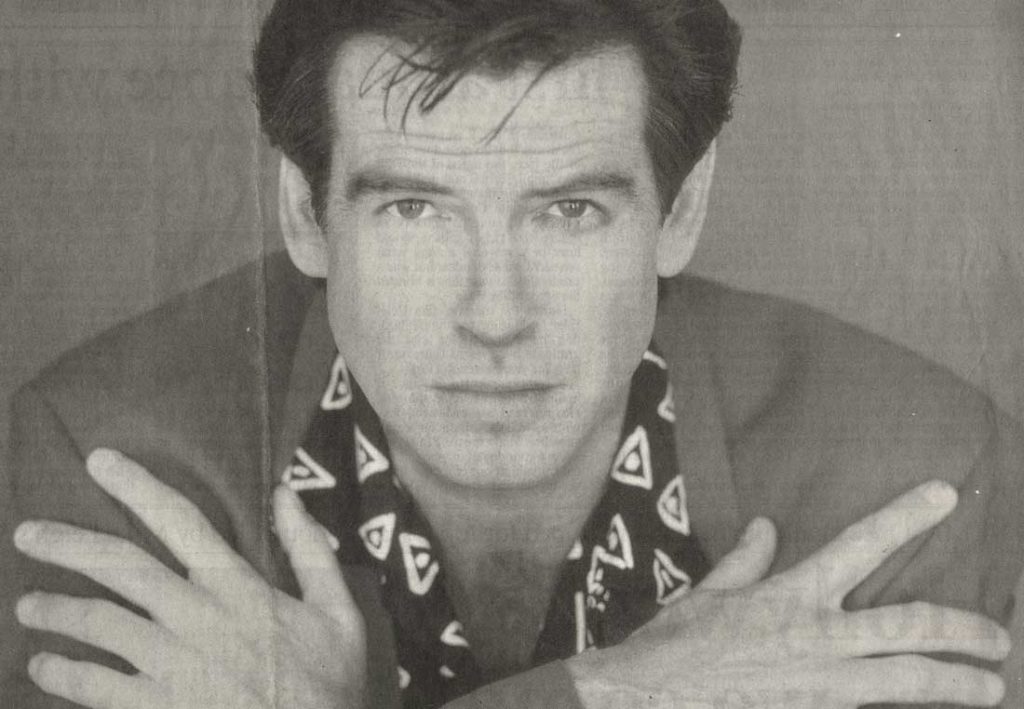 A kind of clear adamantine shield surrounds Pierce Brosnan. Exquisitely suited, hair perfectly groomed, handsome, manicured looks that used to belong to a species called matinee idols, he appears as though he has just stepped out of a gift-wrapped box. Unreal and untouchable.

Then again, he is dressed for his role as 007 in the new Bond movie.

“We’re screen-testing new Bond girls today. A filthy job, but then someone…” Between tests on the F-stage at Shepperton Studios, he relaxes in one of the trailers. Actually, he doesn’t relax. He’s keyed up, watchful, carefully mulling over each question before answering.

“I’ve been working my butt off since the last Bond movie,” he says in an accent that it is still Irish, though the vowels have been stretched through 15 years of living in Malibu. Next week sees the release of his latest film The MirrorHas Two Faces, directed by and starring Barbra Streisand, along with Jeff Bridges and Lauren Bacall.

It is a tale of relationships between two university lecturers, one seeking contentment, the other a passionate commitment. Brosnan plays a role he is made for, as a strikingly handsome man who is considered a magnificent catch in a world where wealth and looks increasingly appear to be the only standard of excellence.

“Yes, Barbra Streisand was great to work with. I’d heard the stories, but all I can tell you is that she’s a woman at the top of her game. She produced, directed and starred in this film and while I could see how she pushed certain people’s buttons, I got on fine with her. Sorry,” he adds, “I know that’s boring.”

For the past seven weeks he has known what it is like to be Streisand, starring in The Nephew, a film produced by his own company, Irish Dream Time. “Thanks to James Bond, I’m now able to make my own films,” he says proudly. “I rented a house in Dalkey, outside Dublin, had all the family around me, and worked with this wonderful cast of Irish actors, Niall Tobin, Donal McCann and Sinead Cusack.

“Ireland is pulsating at the moment. Film, music, theatre, all blossoming. The place is bustling, filled with international companies making things. You can feel it in the air. It’s thanks in large part to Michael D Higgins, the Minister of the Arts, who goes out everywhere banging the drum for Ireland. Now we can make films, tell our own history. I think the next Irish epic, now that we’ve tackled Collins, should be the Famine.”

Does he think of himself as an Irishman? “Oh, completely and utterly and very proud to be so. My soul, my spirit are Irish. When I’m in Malibu, I get homesick and find myself longing for Irish hills and grey seas.” Brosnan left the town of Navan at the age of ten, 33 years ago, to join his mother in London.

“My parents separated, and my mother left for England to train as a nurse. I was brought up by my grandparents, until they died, one after the other, then after that I went to an aunt and uncle. Eventually, I joined my mother and stepfather in London.

“My mother had gone to lay down the foundation for a better life for the two of us. I missed her desperately, but I’m glad she took that step. I’m very proud of her courage. It wasn’t easy being the child of a broken marriage in Ireland during the Fifties; you were different, talked about.

“Then going to England brought a different set of problems. I didn’t integrate too well either: my Irish brogue made me stand out among the boys of south London. So I learnt to fight, to look after myself. Then I learnt how to make them laugh. Not that I mind being the outsider. It’s not a bad place to be if you want to learn and observe.

“And I did. I wanted to act, practically from the time I saw my first film. Films were my passion, are my passion, and work — a most fortunate position to be in. It’s been a long journey for me when I think about it, a long way from that little house of my aunt’s.

“I took my children to see it last month, and as I stood there in the bedroom I once shared with lodgers, I thought what a long way I’d come. Here I am, back in Ireland making my own film, and working with these great theatrical names. I thought: ‘Yes, it’s been a long journey, a staggering one, but I’m a very fortunate man to have made it.”

In October 1994, his wife, the actress Cassandra Harris, died of ovarian cancer. They had been married for 17 years and he had nursed her for four. She left behind three children: two from her relationship with Richard Harris’s brother, Dermot — Charlotte, now 23, and Christopher, 22 — and their own son, Sean, now ten.

“They lost their mother,” he says. “And they will feel that loss forever. Although they have each other, and they are very supportive and loving, they are still young people who have lost their mother. That filthy disgusting disease,” he says with feeling. “If you’ve ever watched anyone die from it then you’ll know what I mean.”

He says of Cassie: “She is someone who could never be replaced. Behind her she left me gifts of strength and a courage to be a man. She bestowed qualities I never knew I had. After she died I became fearless. I can do anything, anything I’d tell myself, because I’m alive.

“That’s what she gave me, a value, an appreciation for life. She helped me to embrace what she had lost. Yes, I’m a changed man all right, a more compassionate one I hope. I still have my faith, I didn’t turn away from Catholicism, if anything I leaned into it for comfort.”

He has a new life now with a new woman, Keely Shaye Smith, a 30-year-old environmental journalist, and very shortly there will be a new baby around. “Secretly, I think I wanted to be a father again,” he says. “I’ve enjoyed fatherhood. We’ve no plans to marry, though Keely’s a terrific person, someone who’s given me a domestic life again, who’s brought me much contentment and happiness.”

Discussing his looks doesn’t faze or embarrass him. Obviously, he has grown to accept the sidelong glances, the interested female eyes.

“Sure, I’m aware of them. It would be dishonest to say I didn’t know what you were talking about. It’s a quality, something I have, that I respect. I carry it lightly. Looks are just there and they’re not to be abused.

“As an actor, sometimes they’re useful. Then again, I’ve lost jobs through my looks. I desperately wanted to be in John Huston’s last film, The Dead, and although he saw me for it, he thought my face too young… and too good-looking. It’s very dangerous for an actor to start believing he can lean on his looks.”

Being the possessor of such heart-stopping handsomeness must have smoothed certain obstacles — like attracting women. “I’m not sure handsome men impress women. Then again, maybe they’ve helped me to meet the right ones. Although I’ve had my pitfalls too you know, and my heart torn apart a couple of times.” Charming sentiments. But I sensed his words lacked a certain conviction. 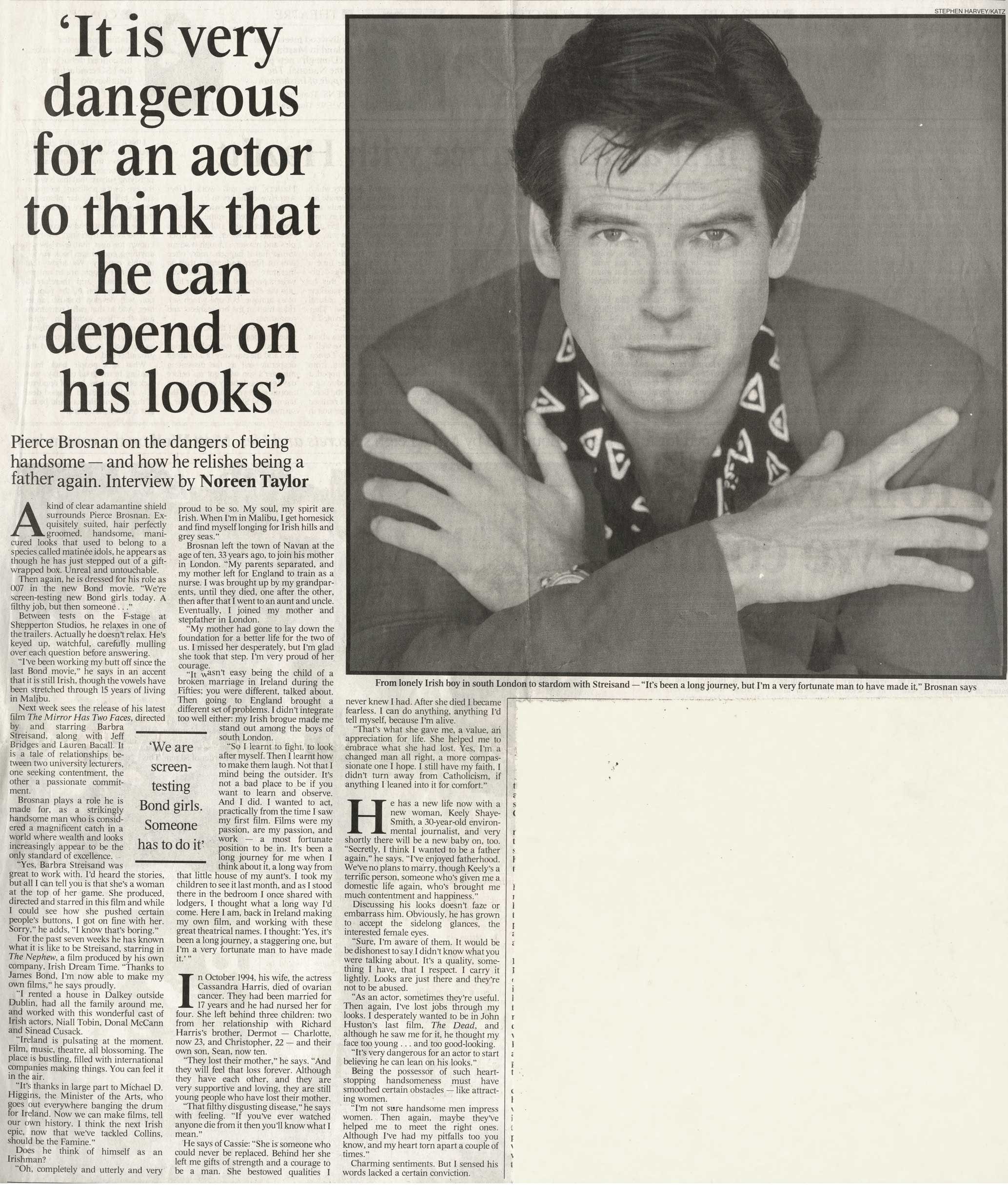