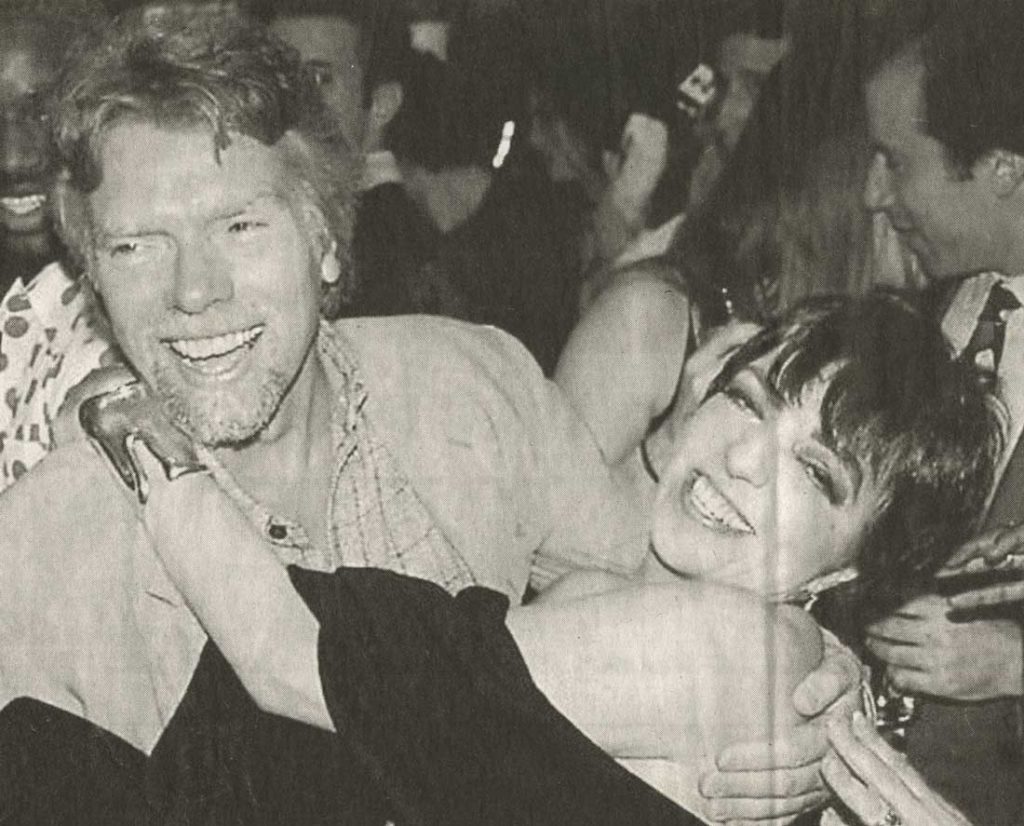 Richard Branson stands in the middle of the new Virgin fashion department in Selfridges, the London store, with a mobile phone in one hand and a scrap of paper in the other. “We’re out of all the size 39s”, he tells an employee at the other end of the line. “And all the gilets have gone. What’s a gilet, by the way?” He pauses to listen. “A Puffa jacket, right. So we need to stock up on more, don’t we?”

Ignoring the stares of curious shoppers, he continues into the telephone: “You see, when you’re starting a new company, first impressions are so important, don’t you think?”

Clearly, Mr Branson’s questions are rhetorical. But he never raises his voice and he is not in the least bit sarcastic. In fact, he betrays the kind of nervousness about the gilets and the shoes that one might expect from some freshly promoted store buyer.

You can’t help thinking, is this an act? Here is Mr Billionaire, the legendary Mr Can-Do, who started off with a magazine called Student and ended up with a business empire embracing airlines, railways, high-street stores, hotels, banking, soft drinks, records, cinemas and computer software.

Yet he is running around Selfridges talking earnestly to the store assistants. What do they think of the clothes? How are they selling? Could it be done better? All the time, he scribbles their remarks down on a bit of paper. In some ways, Mr Branson is easy to understand because his rationale for all he does is so simple and straightforward. Then again, given the complexity of his operations and the sophistication that must be involved in such enterprises, we know he cannot be that uncomplicated. Can he?

The problem is that he makes it very difficult to see through that unpretentious facade into his canny mind. “Where is Selfridges?” he asks the taxi driver while searching for money in his jeans pocket. “Maybe we should hop on the Tube. I’ve only got dollars with me.”

Those dollars quickly disappear when we reach Oxford Street where Mr Branson is surrounded by beggars. “You can have these,” he tells a child. “Just take them to an exchange shop and they’ll give you English money.”

It is not an act. You can tell that the gesture is a habit. Mr Branson’s business life seems like an open book. The wonder boy learnt early on the importance of publicity, that time spent with feature writers on their long, in-depth interviews made him seem more accessible and therefore more popular.

But his private life, especially the dynamics of his relationship with his wife, Joan, have always remained off-limits. He will talk about his parents, who rank among his closest friends, more readily, but ask him about Joan, his partner for more than 20 years, and the shutters come down.

Then imagine the surprise when Mrs Branson and the children meet up with him in Selfridges. We spot them emerging through the crowds, waving and weighed down with Marks & Spencer shopping bags. Their children, Holly, 16, and Sam, 13, are blonde good-lookers.

The brief meeting between Richard and Joan is fascinating, explaining so much more than any of the obscure sentences he uses to describe the relationship. She is golden-skinned, with tossed blonde hair, but her tan could have come from Ibiza rather than their private Caribbean paradise, Necker, where they spent the summer months. The anonymous clothes reveal little. Only the exquisite diamonds on her fingers betray serious money. Her accent remains robust Glaswegian, a clue to the background Mr Branson describes merely as working-class. Their children sound like their father: middle-class and confident.

“We’ve been to Marks and Spencers,” she says unnecessarily. “Hopeless,” she tells him. “Ask an assistant for something and they look into the middle distance and tell you over there’.”

She asks Richard, “You had yer lunch?” while he tries on jackets from his new Virgin line. “That jacket’s too tight,” she tells him, as he leans over to plant a kiss on Sam’s nose. “Try a bigger size. And don’t buy any of those blue shirts. They’ve already sent you a box.”

She helps him into the bigger size and runs her hands over his back to make sure it fits. “Can you take these bags back to the house?” she asks. “Sure,” he says.

“Oh, great,” she laughs, all winks and mischief, making a little fist of triumph. “The children are going to boarding schools so we’ve been out buying what they’ll need,” she tells me. I murmur something about the need to sew on name tags. “Och no,” she says. “I’ll delegate that to my daily.”

That, and the diamonds, are the only clues that this woman inhabits an extraordinary world of riches, celebrity, private planes and islands. As she leaves to continue shopping in Oxford Street, she says fondly: “Ah’ll see you at home.”

Home is a mansion in Holland Park, one of London’s most expensive areas. There are, in fact, three mansions, the sort of residence which normally houses an embassy. Our interview is conducted in one which resembles a rather smart private hotel. Silver-framed photographs of Joan and the children in Necker dominate the reception room. It is homely, cosy, the staff sound relaxed and laughter rings from various rooms.

Branson’s headquarters are a recognisable descendant of the old days of Student magazine where work and ideas were conducted from bean bags and everyone was addressed as “man”. The Sixties hippie ethos still prevails. When I arrived a happy young woman, who looked as if she was hosting a party, said: “If you want to go on up, Richard will see you now.” Ten minutes into the interview, I was so glad he had taken me with him to Selfridges. He gives lousy interviews. Nervous, pedantic, swinging round continually in his chair, swinging away from questions too close for his comfort, he ums and ahs and squirms whenever he senses he is being coaxed to reveal anything too personal.

Ironically, one almost begins to wish for a tycoon with the shadows and complications of a Goldsmith, Maxwell or Rowland, because this man is all light and no shade. No drama. He is happy. His staff adore him.

My only awkward moment was asking about the two American court cases when he was accused of sexually harassing his staff. “One case has been thrown out of court and the other is about to be,” he said. “I’d never do anything disrespectful to my staff. But the States is filled with ambulance-chasing lawyers, so …”

Instantly, one feels guilty for having introduced such a grubby subject and one apologises. He has that effect on people. His hesitant, quavering voice taps into protective instincts and I wonder how many colleagues and business associates have felt that way about him. Joan mothers him and perhaps they do, too.

I ask him why, at 48, he has written his autobiography, Losing My Virginity, which will be serialised in The Times next week. He says: “It’s because I wanted to record the most exciting years, the years of struggle, so young people might be inspired. I want them to follow their dreams, to believe that everything is possible.

“Most entrepreneurs are so busy struggling that they don’t have time to record their efforts until they are too old. And with my rather foolish adventures each year, I thought it time I got it down on paper.”

He is referring, of course, to his daredevil activities, such as his hot-air ballooning. Trophies pronouncing him first to cross the Atlantic sit on mantelpieces, on tables, next to those sun-kissed family holidays in Necker.

He almost suggests a reason for risking his life: “Compared to the struggling years, the past five years have gone so successfully that they’ve almost been an anti-climax.”

I kept insisting that, surely, there were times in his life where the nights were sleepless, when the famous can-do confidence gave way to doubts.After more leg-crossing, chair-swinging and examining of hands, he said: “Sleepless nights are a waste of energy. I tell myself that if I’ve given everything, whether it’s crossing the Pacific in a hot-air balloon or a business problem, then as long as I’ve worked night and day, I can sleep. The next day I begin building.” I tell him that he reminds me of a sketch in a film, starring Mickey Rooney and Judy Garland, where they decide, against the odds, to produce a musical for their school concert. The message: everything is possible if you are enthusiastic and determined.

He seems genuinely bewildered by my insistence that there has to be something darker behind the energy and the endless ambition, the unfulfilled appetite for yet more success. “I enjoy life. I enjoy people. I mean, if everything fell apart, then I’d just pack up the family and go off round the world.”

From his autobiography, the only suffering he allows us to glimpse occurs at the end of his first marriage to Kristen Tomassi, who remains a friend: “Our children are very close, and she’s helping to decorate one of our hotels.”

He says: “Joan ended the pain I felt when Kristen left. A friend of mine had suffered a similar trauma. His wife had fallen in love with another man. I tried to help him, told him of how I had found someone else. He didn’t listen and committed suicide.

“You see, I’m enormously lucky with Joan. We’d both been married before. She’s six years older than me and comes from this down-to-earth, working-class, Glasgow background. Our children come before everything. She’s the one who has kept my feet on the ground. When I returned from Russia after meeting Gorbachev, she told me there were nappies to be changed.”

Has Joan had to evolve from anonymous girlfriend to celebrity wife? “Not really. She’s steered clear of the press. We only socialise with friends, so she hasn’t had to adapt to people she would be uncomfortable with. In my eyes she has matured beautifully. She and the children had opinions about the clothes line just launched, and Holly has been modelling Virgin clothes for next month’s Cosmopolitan.”

There is, however, a worldly side to Joan, who once described her husband’s weaknesses as beautiful women and sticky puddings. I ask if we can talk about this. “Not really.” More wriggling, but despite the discomfort he does mention his reluctance to talk about his interest in women. “Let’s say that if you weren’t a journalist I’d explain.

“Of course I adore women, especially beautiful ones. But Joan’s a realist, which is one of the reasons why our marriage is so successful.”

Of their children, he says there are no corporate inheritance plans. “I want my children to have the freedom to explore their own worlds. Holly wants to be a doctor specialising in paediatrics. She’s got two science A grades in her GCSEs, which is a terrific start. Sam is too young for those decisions.

“But I don’t want them to be burdened with the Virgin inheritance. There are many good and talented people in place, able to take over.”

Richard Branson is an extraordinary creature. As his book shows, he does not read or reflect. He just does. And his life is proof that there is a great deal to be said for that. 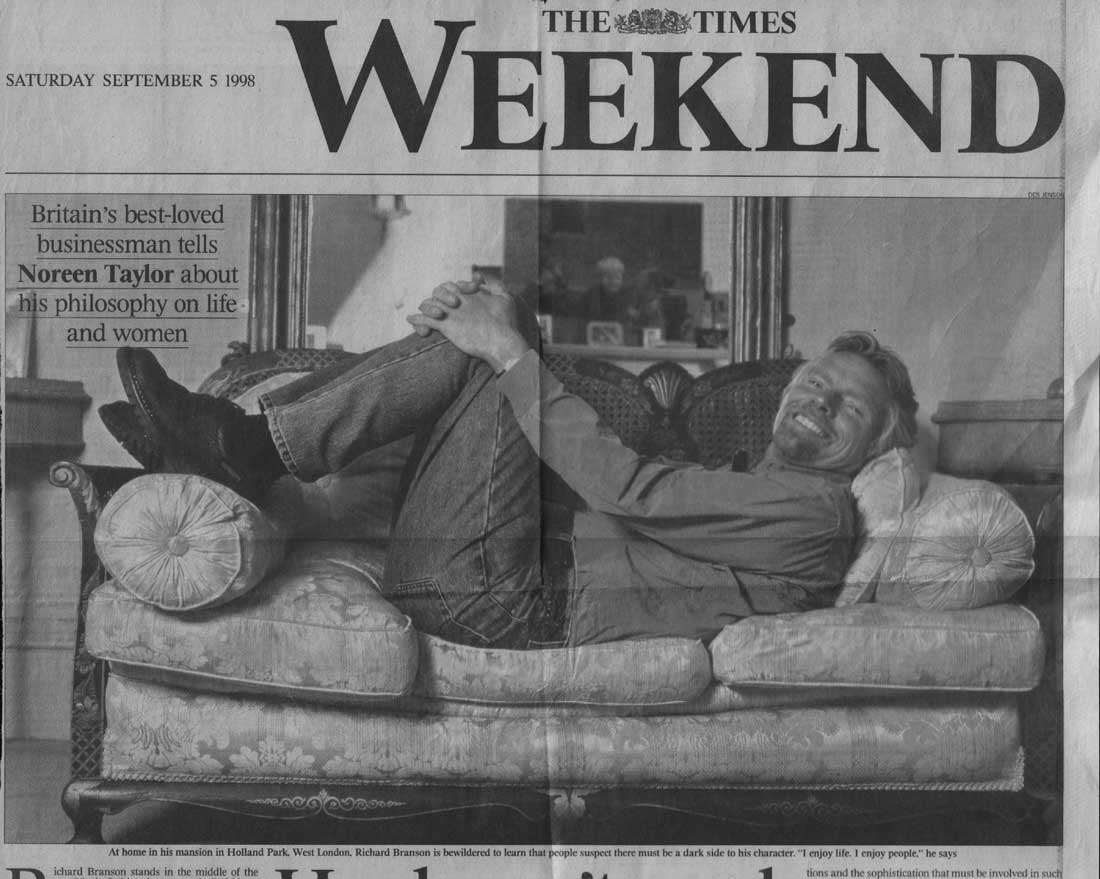 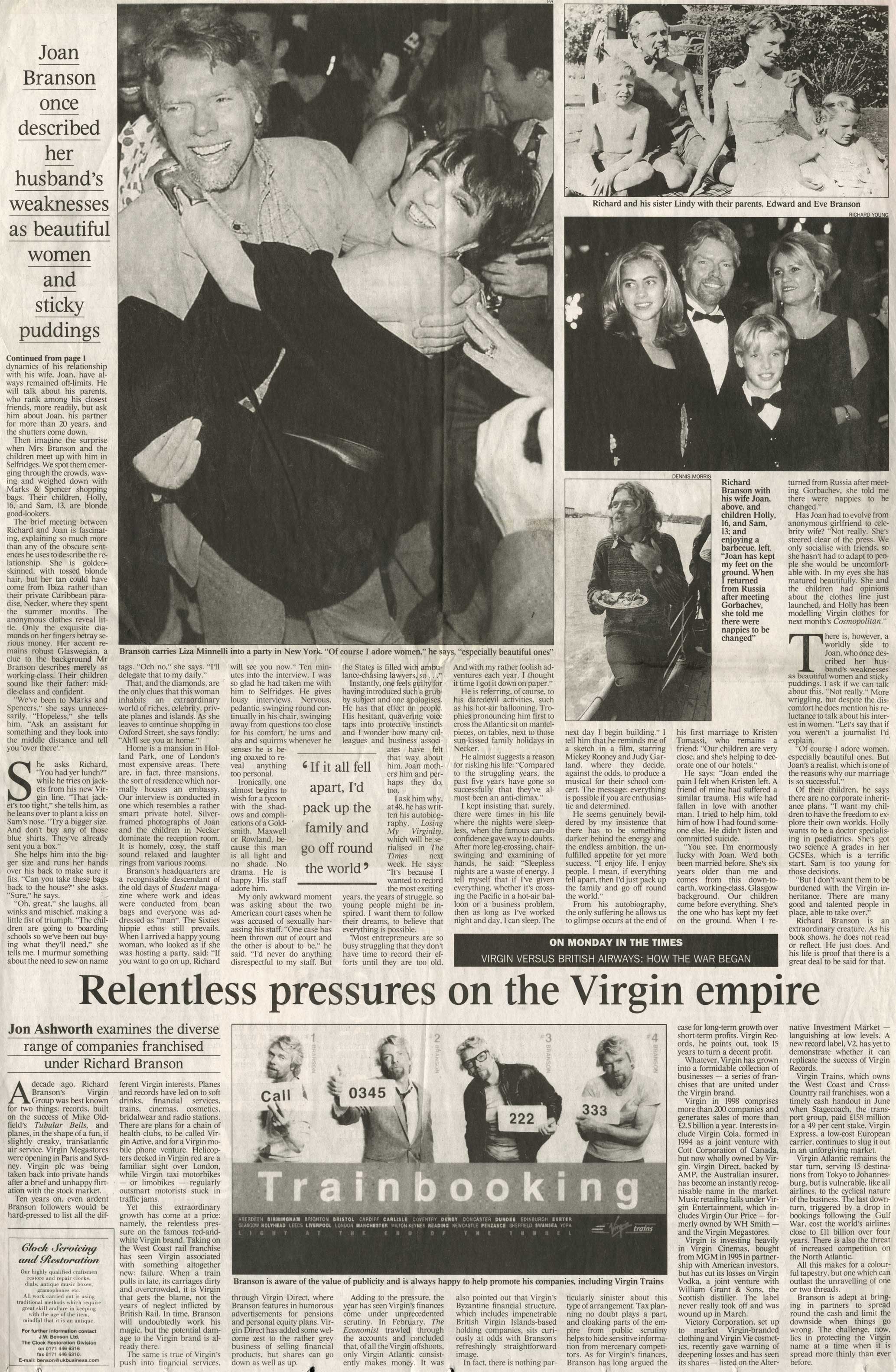