Still Jumping’ Jack, but not so flash says Mick Jagger 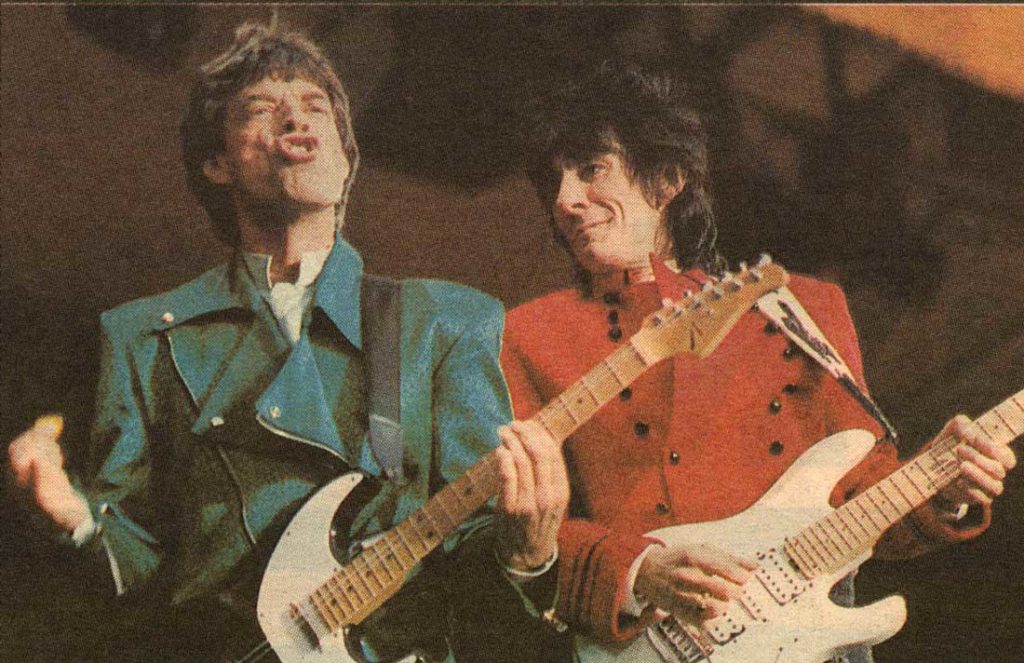 Waiting to meet Mick Jagger is a rather nervy business. The star is unpredictable, restless, easily bored and boringly noncommittal about his private life, his past, or what he calls “all that tired old history”.

You already know he is going to be late. The rich and famous always are. Swift, light footsteps on the stairs eventually herald his arrival, and round the corner he comes, hand politely outstretched, face wreathed in genuine apology. “Sorry about the hold-up,” he says. “Running behind, ’cos I stayed up all night.”

As his smile breaks out, the intense familiarity of the man hits you. A friend of Jagger’s once said that he has the same effect on people as royalty, simply because he has been so famous for so long. He is thin. Uncomfortably so. Thin legs, tiny bottom, concave stomach.

And although he is worth an estimated £70 million and has signed a recording deal with Virgin for another £17 million, none of it is on show. The grey denim shirt and trousers look as though they could be found in any jeans store. The body that resembles an anorexic adolescent’s is at odds with the deep lines etched on his 48-year old face.

Yet there is an overall impression of youth. “God, I wish there was,” he groans, cupping his face in his hands. “My voice is alright, though – stronger than it ever was, ’cos I stopped smoking 15 years ago. Stopped doing a lot of things that were bad for it.”

We are in one of Mick Jagger’s houses. Apart from the Richmond mansion, the New York brownstone, the Mustique beach house and the French chateau, there is this house in South London, staffed with assistants who look after the personal and business requirements of Mick and his model wife, Jerry Hall.

A secretary can be heard arranging tickets for a U2 concert. And you learn that as Mick and Jerry’s visit to Los Angeles was cancelled because of the recent riots, hotel rooms have to be rebooked for their three children, their nannies and a cot has to be bought for baby Georgia. Such is the smoothly-run domestic life of the world’s most enduring rock star.

He does a little dance in front of the mirror, groaning again at the sight of his tired, pale face. “I feel awful when I don’t get enough sleep. Don’t know why I do it, stay up all night. But we’re not here to discuss my health, are we?” Indeed not. We are here to talk about Mick’s involvement with Britain’s first National Music Day. A day that has been conceived by Mick and will be co-sponsored by the Daily Mirror.

Dedicating a day to music, when young and old, amateur and professional, can join in, is very much Jagger’s idea. “I thought about it when I was in France, ’cos the French have a music day. I wanted it to be a day when everyone has fun. A day that doesn’t have to be connected with a charity, but just happens ’cos it’s an amazing thing to do. 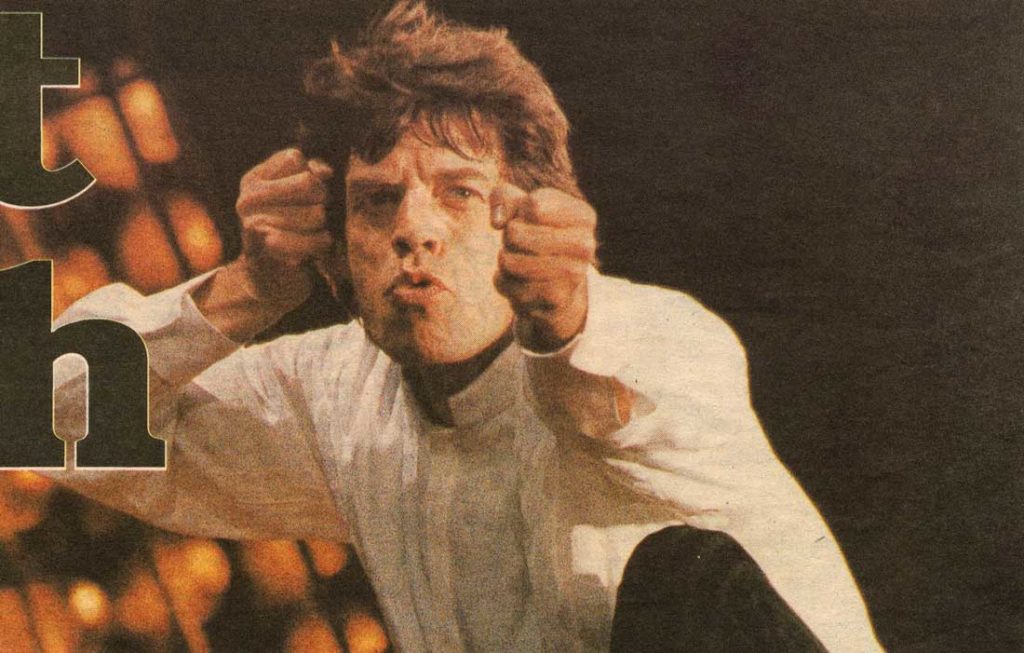 “So, I asked the Arts Minister, Tim Renton, if we could have one as well, and he agreed it was a great idea. So now we have it. June 28 is going to be National Music Day. There will be lots of street events as well as concerts. I’ll be keeping a low profile, but Prince is doing Glasgow. Jose Carreras will be in Bath, and Clapton and Elton are appearing at Wembley. It’ll be a day for everyone. After all, music is something that touches most people’s lives.”

Mick Jagger’s more than most. Without music, has he ever thought where he would be? “Yeah, I’ve often thought of that,” he says, in his camp Cockney-goes-to-Mayfair accent. I’d probably be in one of those Third World countries, in a safari jacket, helping some impoverished government with its economy and its trade problems. That’s what I studied.

“I quite fancied being a journalist. Though the thought of all that stuff you have to do at the beginning, like weddings and funerals on a local paper… no thanks. But then we made a record, and other things sort of took over.” The understatement makes him laugh.

“I was asked to write a book about the past and the Stones history, and all that stuff I’m not interested in anymore. I tried, but it was all a blank. Then there was that other thing about telling on your friends. The more I went into it, the more I realised how hurtful it would have been to everyone.  I gave up after a year. I’ll wait till I’m an old croak, and everyone is dead, and THEN I’ll do a book.”

Great guffaws burst forth, and the diamond embedded in his front tooth glitters in the sunlight. He has achieved a lot in his life. The kind of money and celebrity that is beyond all dreams. Wherever he goes in the world, there is instant recognition. His fame touches everyone connected with him.

*Ex-wife Bianca becomes a jet-set darling, and a spokesperson for her country, Nicaragua.

*Jerry Hall is offered super-model contracts based on her high-profile status.

*Daughter Jade, 20, without any formal training, has an art exhibition and 700 attend the opening night.

Does it all make him feel like Mr Success when he wakes in the morning? “Dunno, really. I try not to feel too smug, otherwise I might not achieve much more if I did. Getting to No. 1 is always terrific, a bit like scoring a goal at Wembley.

“It’s important to keep mixing with people, keep in touch with what’s going on, instead of shutting yourself off behind a fortress with security guards. I still write songs most days. Wherever I go I take a pen, a notebook, a tape recorder and my guitar. If I was asked what I’d take on a desert island, that would be it – my guitar.”

Oddly enough, Jagger has refused offers to take part in the Radio 4 programme Desert Island Discs. Why?“Nah, leave it out. SueLawley.” The look on his face hints that Ms Lawley is notNo 1 on Mick’s lust list – not for his island, anyway.“She’d ask all these questionsabout my private life.Don’t fancy that. All thatboring history, no thanks.”

For Jagger history, look up drug busts, the death of Stones guitarist Brian Jones, infidelity, and the drama surrounding former loves Marianne Faithfull, Bianca Jagger and Marsha Hunt. Bianca and Marsha are the mothers of his two elder daughters. Jade and Karis. In fact, look up anything to do with sex, drugs, rock and roll in the Sixties and Seventies… decades that gave the Stones one of rock’s most notorious reputations.

“It was so easy to shock people back then,” he says. “Wearing a pair of jeans to the wrong place could get them going.’’ As a teenager, Jagger was undoubtedly a cool dude. One of the arty, black polo-necked brigade, into protests and obscure blues. “Yeah, I suppose so,’’ comes the proud reply. “I was listening to jazz, and generally being a bit pretentious ’cos pop was so uncool then. It was important to keep apart from people who liked Cliff Richard.”

Was he always so confident about his views and tastes? “I was about my voice. I’d sung in the school choir as a kid, and with mates when we were mucking around.” Jagger takes care of his voice, practising daily when on tour. “I’d hate to have to worry about technique and practise for hours as opera stars have to. At least fans coming to rock concerts are not worried about you hitting the right note.”

Jagger’s memory is so bad that even questions about early musical influences leave him scratching his head in frustration. “I can remember Radio Luxembourg being important, ‘cos that was the only station that played decent pop. Yeah, an’ I remember a Buddy Holly concert. That was pretty seminal stuff. But not a lot else. Who wants to bring their past back anyway?”

He is a man of many characters, Mick Jagger. A fascinating, chameleon-like creature whose front changes depending on the person or the situation. You wonder what personality he dons when lunching in Mustique with his friend, Princess Margaret. Or what character he plays while sitting next to some elderly dowager at the stately home of one of his many aristocratic chums.

Compared to the average rock star, Jagger’s world has always been varied. He once swore that he would stop strutting around on stage when he hit 40. Yet he’s still ambitious, still the Jumping Jack Flash who thinks it’s a gas. Ambition, and the control he exercises over his financial empire, have always been carefully hidden. “I hate accountants,” he sneers. “Hate them. Never sit down with them at meetings. Tear up every bit of paper they send me.”

Although he is about to become a grandfather, Jagger cannot quite stop playing the reckless boy rebel of the Sixties. He straddles his chair like a kid, uses the lingo of youth and, as he rises to go, breaks into this little on-the-spot skip. “You got everything?” he asks. Well, everything Jagger is going to give. 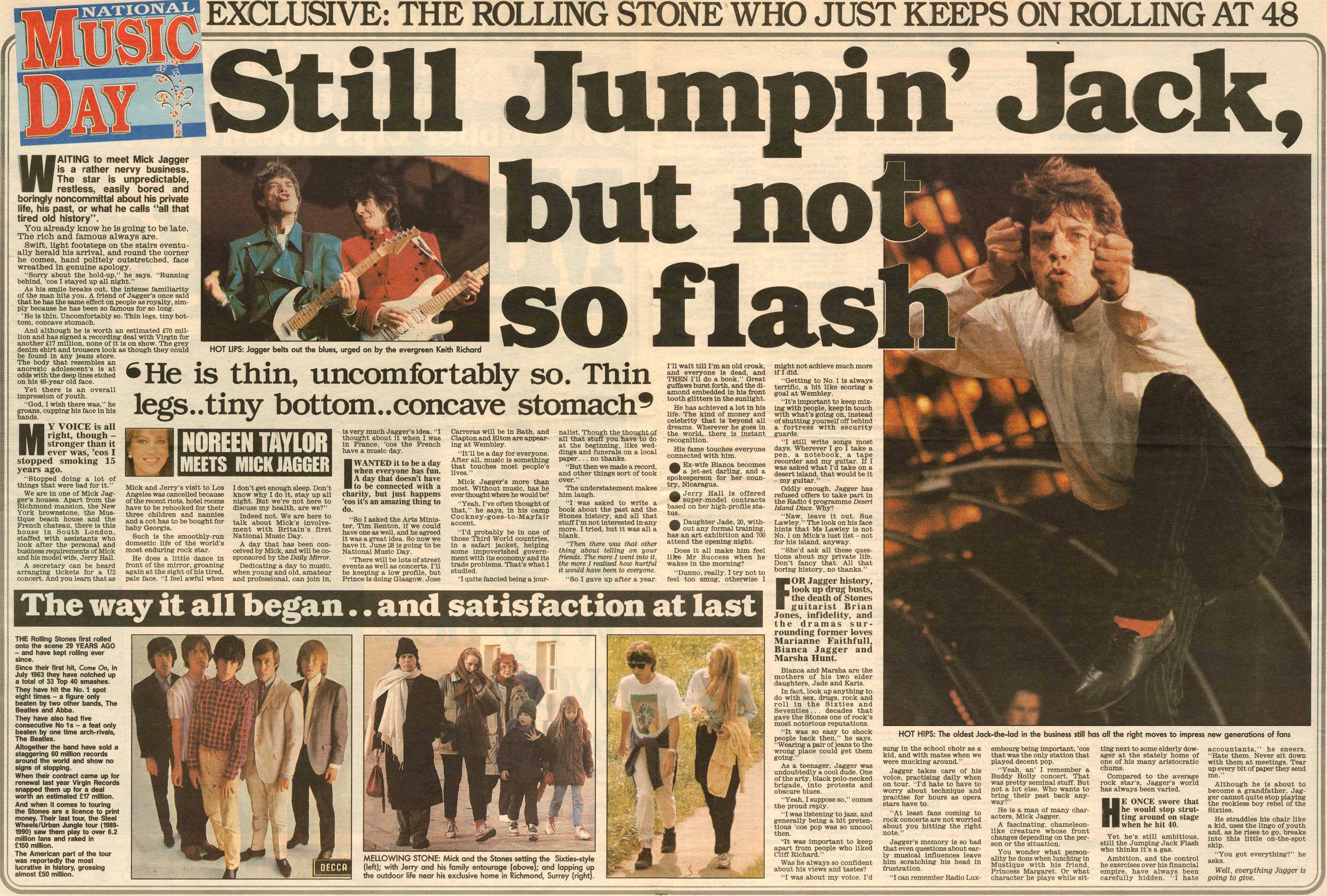