If only it were that simple: the holy trinity of success, money and fame are supposed to guarantee eternal happiness. Not for Nuala O’Faolain, whose mind has long been programmed by the rhythms of sadness. Even the accomplishment of her first novel reaching number 12 in The New York Times best-seller list fails to dilute the anxiety evident in her sharp, intelligent eyes.

My Dream of Youis mesmerising and lyrical, a welcome departure from the formulaic tedium of so many romantic novels. O’Faolain has succeeded in creating a bitter-sweet story that has touched the hearts and minds of both the American public and its critics. None of this acclaim is evident from the sad-eyed woman who has just stepped off a flight from Bordeaux.

As we sit in an airport coffee shop, she says: “I went to see the almond blossom, refresh myself after weeks of American airports and signing books in Barnes & Noble. I’ve spoken to more people in the past six weeks than I’ve spoken to in my life. And it rained all the time.”

You can sense despair as she bemoans her weight gain, the boredom of the US publicity trail, her single status, her consequent sense of loneliness. She is 61 and has given up hope of finding anyone with whom to share her life. A case for Prozac perhaps?

“No, I’m not depressed,” she insists. “It’s just inner sadness, and there’s nothing I can do about it. I’m like the Irish economy, booming away, except that nobody in Ireland actually believes it’s happening. I think I’ve been this way since I was a month old. I had hoped that all this good fortune would deflect the lifelong habit of melancholy. Maybe it will one day. Maybe it won’t.”

Nuala’s good fortune began five years ago when she was asked to write an introduction to a collection of her much-loved columns in The Irish Times. What was expected to be a short essay turned into an extraordinarily poignant autobiography of a woman writing a mournful letter of farewell. O’Faolain says: “Everything in my life I’d set my heart on had evaded me. I’d spent my years looking for love, for a family and there I was, on my own, depressed, invisible, as women of my age tend to be, angry with the waste of my body.

“Thinking I had nothing to lose, I sat at the dining table and poured it all out, never dreaming that anyone would take me seriously.” She told how her life, and those of her eight siblings, had been scarred by a distant, egotistical father and an alcoholic mother. This led her into years of drink-fuelled affairs and work as a cleaner in London before she won a scholarship to Oxford, later becoming a BBC producer.

Written with an honesty, almost embarrassing in its intimacy, Are You Somebody? became an Irish publishing phenomenon, and then a big hit in America, where literary agents were soon knocking her door down. “‘Where’s the next book?’ they kept asking. ‘You have to write a novel now.’ Since I had no faith in myself I’d say, there is no other book. That first one was a fluke.

“You see, all my life I’d taught myself to lose respect for anyone who praised me. In the first place, I hadn’t a clue about how to write fiction. I knew I didn’t want it to be one of those modern, mediocre romances, an airport novel. They kept insisting, offering me floods of money, so I thought well, I’d better give it a try. I’ll go to my little house in Clare and write.

“But I wrote nothing. Ireland had drained my confidence. So I moved to Manhattan, since everyone there seems to be writing. But some days I’d open the lap-top and start crying because I thought: I can’t do this, whatever led me to believe I could? Why am I sitting here, a grown woman making up stories when I could be doing my columns?

“The breakthrough came one morning when I looked at what I’d written and thought, well, if I move that there, cut that section into three, move the middle, yes that’s it! A year and three quarters of hard, slogging work went by before I had completed it.”

The resulting novel is about a middle-aged Irish woman, Kathleen De Burca, a travel writer living in London, whose office and colleagues become substitutes for home and family. Into Kathleen’s hands comes a document, the divorce papers of an Anglo-Irish landlord who discovered his wife’s passion for one of their Irish servants.

Unravelling the lovers’ story takes her back to mid-19th century Ireland, to a dilapidated mansion where the couple ruled over a countryside ravaged by the famine. “The Talbot Document actually exists,” says O’Faolain. “A friend gave it to me saying that I might make something of it.

“The background of the famine, and the idea of an Anglo-Irish woman having an affair with a creature who most of her class considered sub-human intrigued me. So little is known of the famine and its effects on generations of Irish people. We’ve never really acknowledged it or questioned how it has damaged us. There are so few written accounts, not even any folklore. It’s as though we’re afraid, ashamed of what history did to us.”

Fastidiously researched, her revelations of the suffering that took place during those years will make uncomfortable reading for the descendants of that country house set who continued to dine from groaning tables while skeletal faces waited outside kitchen doors, ready to pounce on scraps from their fine porcelain plates.

“And here we are now,” says O’Faolain with one of her rare smiles, “the hottest tickets in the Universe.” Being such a hot ticket must surely have brought her a certain sense of triumph? She gave the question some thought before replying.

“What is gratifying is to know that my words have found resonance with so many women, American and Irish women who, like me, lead single lives. I’ve spoken of their fears and doubts, the loneliness that comes from doing everything on your own. With you is a feeling of waste, knowing that your body isn’t enjoying sex or having children. It will be interesting to see if I strike the same chord with English women.”

The suggestion that many women would consider themselves fulfilled by her success, by the praise won from such literary achievements, along with the squillions of dollars piling up in her bank account, cuts little ice. “You’re married,” she says angrily. “You haven’t a clue what I’m talking about. Women like you can’t have.”

Softening again, she admits that the dollars have helped to lift the melancholia. “There is enough to enjoy travel, to buy theatre and concert tickets, to surround myself with books, music. Best of all, I’ve bought security. It has given me a way of growing old, knowing that I have enough money for a comfortable nursing home, because women like me who have no one to look after them worry about such matters.

“With all that, and my collie Molly beside me, I should be all right.”

She still seems doubtful. “Maybe I should just go back to my house in Clare, be quiet, and think about what’s happened.” 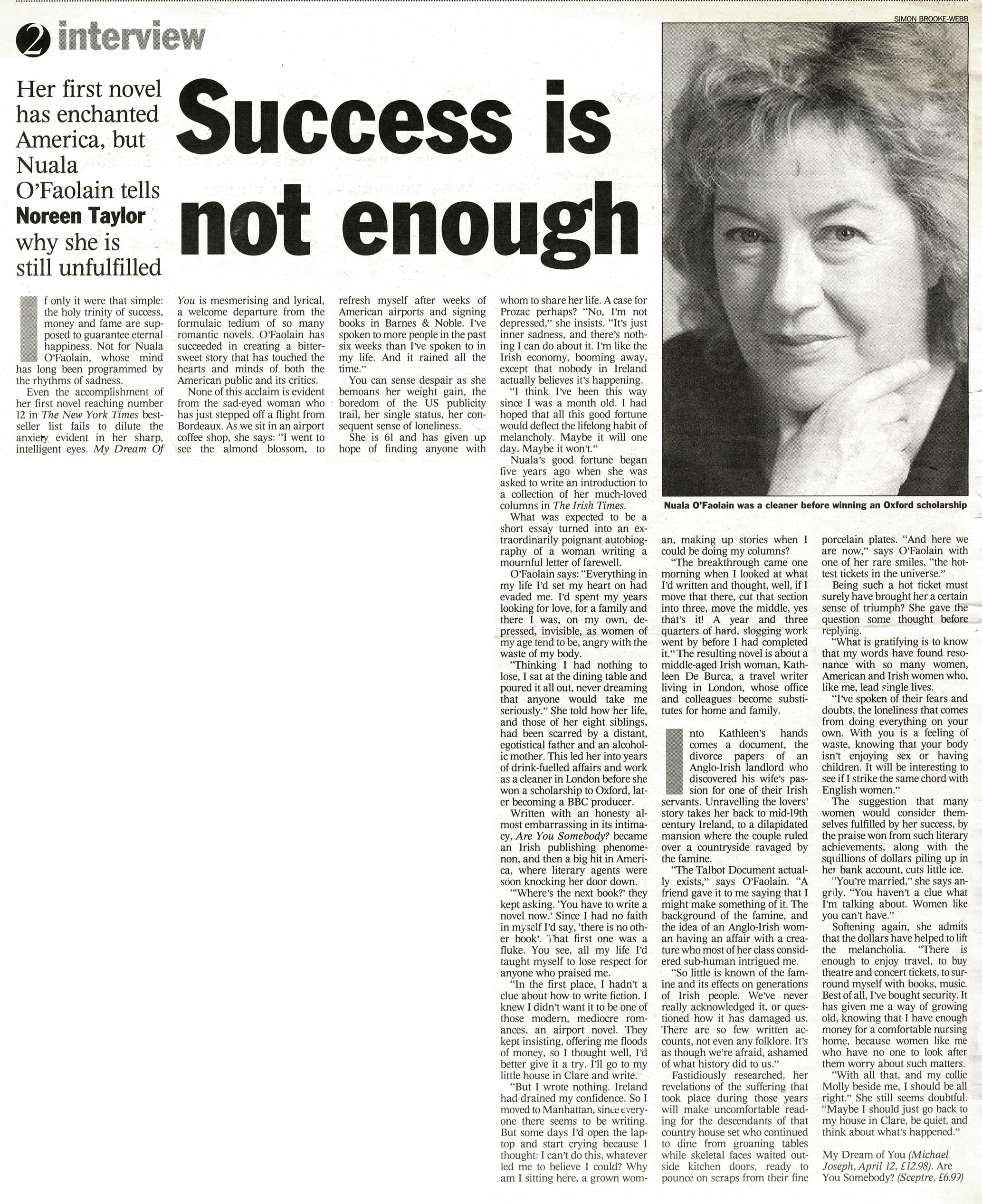