The Brazilian girl who became a mother aged 9 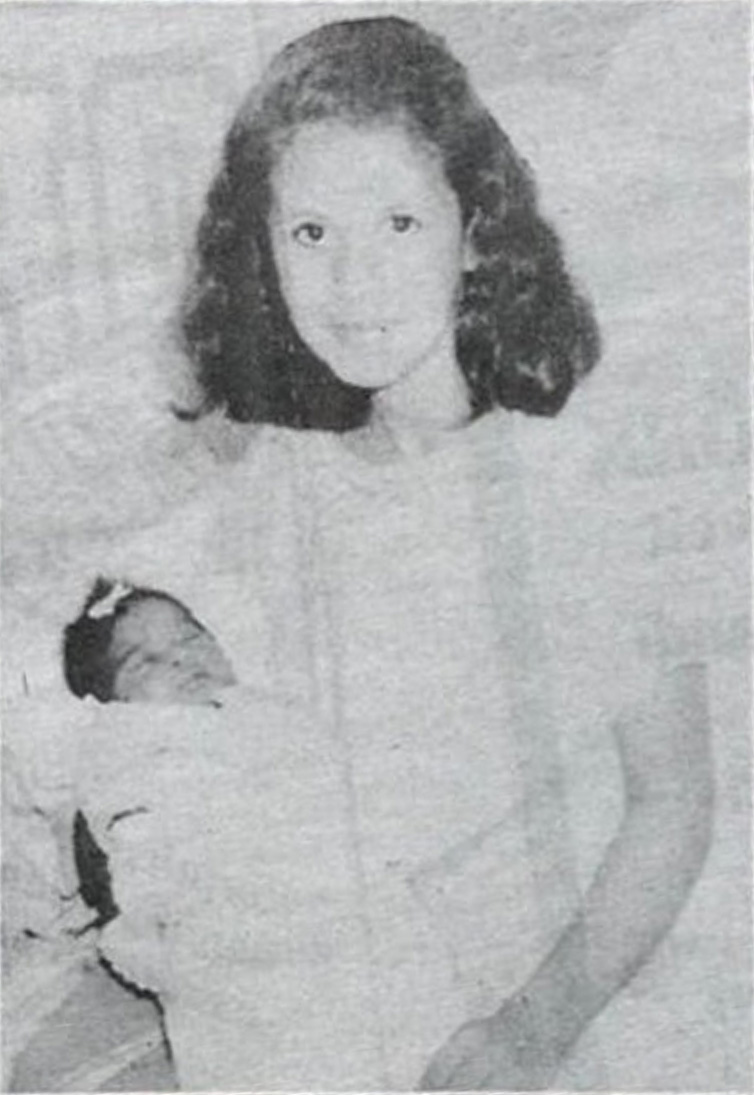 Like any little girl she happily sucks an iced lolly. Unlike any other nine-year-old in the world, she cradles her own baby in her arms. This is Maria Eliane Jesus Mascarenhas, the world’s youngest mother who has confounded doctors and gynaecologists.

No one outside her country, Brazil, had seen her. Few believed she existed. Now the Daily Mirrorhas found her. We managed to trace the doctor who delivered the baby. Then we travelled 10,000 miles to Jequie in the poorest, most backward part of north east Brazil.

It is the home of peasants, ancient curses, visions and taboos. There we saw for ourselves that the little mother was no made-up story, no wild gossip. She is a real child, known as Eliane.

Her daughter, Daiane, was born a perfect 7lb 8oz baby by Caesarean section on Tuesday, March 25, this year in the Sao Vincente clinic at Jequie. The doctor who delivered Daiane confirmed Elaine’s age. He had seen her birth certificate.

Yet he had remained suspicious – until he saw the death certificate of Eliane’s mother. She died 40 minutes after giving birth to Eliane, her eighth child. And that is another sadness for the nine-year-old. She has no mother of her own to turn to.

Her child’s father is a frightened farm labourer, aged 16. He has run off to hide in the bush, although villagers say he is desperate to see his daughter. Eliane’s life has been spent in a series of mud huts with her 62-year-old foster mother, Maria Canuto, an itinerant land worker.

The three – Maria, Eliane and the baby – have been given temporary refuge by a taxi driver and his wife, where these pictures were taken by Brendan Monks last Sunday afternoon. They are the first to reach the outside world.

When Eliane looks upon her child, it is with a mixture of curiosity and affection. She is still clumsy with her daughter. Someone has to remind her to support the baby’s head when she picks her up. But when no one is looking she slips out of the room to check Daiane, place a toy next to her head, adjust her clothes.

Until two days ago Eliane was breast-feeding her child. Unfortunately she developed a blockage in one of her breasts and the baby is now being fed on powdered milk.

If Eliane had not been brought in from the bush she would have died. The tissues of her body and her pelvic bones were too soft, too immature to withstand a labour.

But the Caesarean has been an unqualified success. Both mother and child are in perfect condition and the baby rarely wakes of cries except for its two-hourly feeds. And Eliane is as proud of her as any new mother.

We were warned by her doctor that she would be extremely shy of us. Although she is delighted with Daiane, she could not understand what all the fuss was about. Eliane is wary of almost everyone, especially strangers. One of the few people who light up her deep dark brown eyes is Dr Goes.

When we finally bent to shake her hand last Saturday, the taxi driver’s wife, Elza, told us Eliane had been worried about our visit. Eliane thought we were coming to take her baby away. Whenever adoption had been mentioned she burst into tears.

Finally, when the timid little girl understood the purpose of our trip she sat next to me at Elza’s dining table and allowed me to hold her hand. Then, quietly, hesitantly, in her childish Portuguese, she talked to us about her baby. Eliane’s story is one of the most poignant, saddest stories I have ever covered.

It is the story of third world poverty, evil exploitation and a little girl who was born to be a woman before her time…

Day Two: ‘My baby is the nicest, the best present I’ve ever had’

The doctor who delivered Eliane’s baby sits in the cool of the smart, white suburban bungalow. His world is centuries away from the state of medieval serfdom Eliane was born into.

Dr Fernando Prata Goes cares about people like Eliane, so he’s embarrassed by their plight. This twenty-nine-year-old doctor knows he can’t change Brazil. But he can save lives. The last two lives he saved left him rubbing his eyes in amazement.

“Quite simply, I couldn’t believe what was in front of me. A nine-year-old girl, nine months’ pregnant… there must have been some mistake. But no, because there was the birth certificate, the papers relating to the mother’s death. The whole thing was, well let’s say it, a medical miracle.’’

Fernando and his wife Sophia, a nurse, first met Eliane when she came to the Sao Vincente clinic of Jequie, in the poorest part of north east Brazil. She arrived with her foster mother, Maria, one week before the birth.

Although Eliane had been living in the roughest rural conditions, existing on a diet of beans and rice without any ante natal care, Fernando says she was in perfect health. “I was stunned because she had none of the problems usually associated with pregnancy.

“My problems with the child were mainly emotional ones. Even a thermometer frightened her. And she cried so much when I had to take a blood sample. I knew there was no way she could withstand the trauma of a normal birth.”

A normal birth would have killed Eliane. Her pelvis was too narrow and her bones too soft. If Jaime and Elza Oliveira had not brought the child in from the mud hut on the cocoa plantation she would have died the most agonising death, and baby Daiane would have perished in the process.

Not even the doctor was sure whether Eliane knew what was happening inside her. “Let me explain,” says Fernando. “You can’t compare Eliane’s emotional development with that of an English child of the same age. Eliane has had no education, never mind a sex education, so she wouldn’t have connected those games she played with Maria’s grandson with the state of her body.

“No one sits down and talks to these children. Adults are too exhausted, too drained from hours of work under the sun. By the time she came to me I think she knew there was a child inside her stomach. But she wouldn’t talk or confide – although now I think she trusts me.”

Eliane came to the clinic on March 20 with her foster mother, Maria Canuto and Elza, the friend who has offered them a bedroom in her house until the baby is strong enough to travel back into the bush.

“I decided after giving Eliane all the usual tests that I would perform the Caesarean on March 26,” says Fernando. But the day before, crowds started gathering outside the clinic wanting to see the nine-year-old mother.

“Eliane could hear them, and I was worried that their excitement would add to her stress. So, when weak contractions began, I decided to perform the operation that night. “She’s an incredible little girl,” says Fernando. “Not once did she ask a question, or complain. She only ever cried when she saw the needle. Before I wheeled her into the theatre I made her laugh by insisting she gave me a name for the baby.”

Fernando told the little girl she wouldn’t feel any pain. “He was going to put her to sleep and when she woke she would have her own beautiful baby to hold. Sophia joins in: “I’ll never forget the look on Eliane’s face when she held her baby for the first time.

“She was so worried we might take the baby from her. Obviously,  adoption had been mentioned but not for one moment did Eliane consider that option.”

Because Maria and Eliane had nothing except the rags they stood up in, Sophia and some of the other doctors’ wives have arranged a collection of dresses, T-shirts and night clothes for Eliane.

Her daughter now has drawers full of lacy outfits, nappies and a cradle. Until a few days ago Eliane was breast-feeding Daiane, but a blockage has dried the milk. For the next few days until the milk returns, Maria and Elza take turns to bottle-feed the baby.

When we returned to Elza’s house last Sunday to photograph the little mother, she seemed friendlier, less suspicious. The whole household buzzed round the baby and Eliane appeared bored by this fuss. She was behaving the way a normal child does when it feels it’s being displaced by a new arrival.

As we sat outside in the back-yard sharing an orange, Eliane told me that she had learned to change a nappy. “When we leave here I will be able to do lots of things myself. I will look after Daiane when Maria goes to work. I like it here,” she says, staring down at her new sandals. “But we can’t stay because it’s not our house.”

Her future seems so bleak, so cruel. The thought of her and the baby traipsing round the dry, hot countryside with only the old woman Maria to look after them was unbearable. We walked back into the bedroom. She wanted to show me another cuddly toy.

“Every time someone comes to the house they bring me a present,” she says. “They think I like the presents more than the baby. But I don’t. My baby is the nicest, the best present I’ve ever had. I am a very lucky girl.”

She runs over again to the wardrobe mirror and spends a long time just standing, staring at her reflection. Suddenly, the reason for her fascination is obvious. The clothes, the shoes… Eliane has never seen herself dressed like that before.

In fact, she has never seen her child-like image in a mirror before. That’s why she crosses her young arms across the large incongruous breasts, trying to flatten them against her ribs. The other little girls playing outside have different bodies, and perhaps for the first time Eliane realises just how strange she must look.