The Burtons, by the man they called Ray-baby 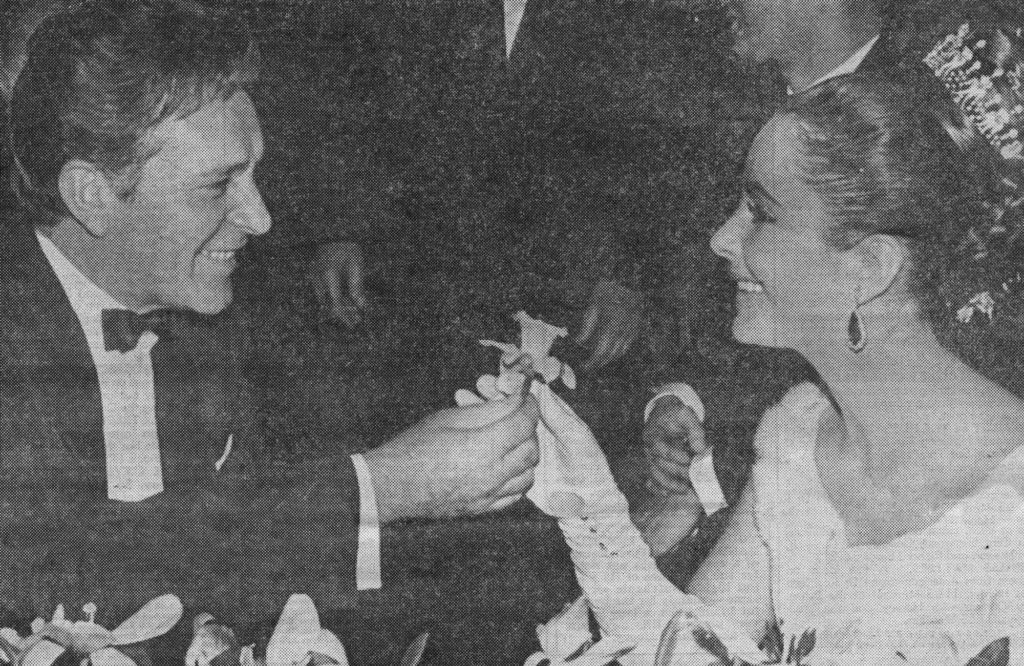 Ever since her days as a 13-year-old film star with her own fan club, baby face on Lux soap and 30,000 dollars a year, looks and cash were no big deal to Elizabeth Taylor. They were always, well, just there.

When she was 15, powerful Hollywood columnists began calling her the most beautiful woman in the world. That label must be engraved on Elizabeth’s skull. Unlike other famous beauties She has never fretted or worried about female competition – quite simply, she was above and beyond it.

What gnawed at her was love and what she thought was lack of love.

Her appetite for constant emotional attention was insatiable. Just ask Raymond Vignale. After seven years with Elizabeth and Richard Burton, Raymond was a basket case.

When the first signs of mental exhaustion appeared and Raymond hinted he could do with a few days rest, Elizabeth – obsessed with her own health – replied huffily: “OK, everybody, Ray-baby is doing a Greta Garbo.”

Raymond Vignale got close to Elizabeth Taylor. So close that he now holds his head and whispers: “Oh God, I know her. 1 know that woman better than I know myself.”

Raymond, tall, socially decorative and pleasing, was paid to be Elizabeth and Richard’s secretary, their walking Filofax and life arranger, occasionally fashion advisor: “Enough, please Elizabeth, you don’t want to look like a Christmas tree.”

He ended up lying next to her in five-star hotel beds, listening, hugging, rocking her, before gently pulling the quilt over the dark head as she waited for the false peace that the bourbon and sleeping pills would bring. The woman who had had it all, had also lost it all.

But there was always more to her than booze and bad memories.

Unlike Marilyn Monroe and Judy Garland, Elizabeth has spunk, and a stronger grip on reality. She is also madly and incredibly generous. Women who worked for her were given Dior wedding gowns when they married. Staff, friends and relatives were flown round the world first-class.

If Elizabeth knew how to give, she also knew how to take. As Raymond says: “She is the sort of woman who sucks you dry. There

was always a drama, always a crisis and in the middle, Elizabeth the drama queen… and poor Richard, pissed.

“The two of them bouncing around the world – 95 suitcases, planes held up waiting for them. And five seats always booked in first-class in case they should be overheard.

“Whenever they wanted something they just said: ‘Ray-baby, I think we’ll go to Mexico’ or ‘Ray-baby, find out if the Rainiers and the David Nivens can come to dinner. Phone Alexandre in Paris, my hair is a mess.’ You cannot believe the way they lived. They were like the last emperors…”

Neither his face nor his name mean anything to the public. He lives in a small north London flat and supplements his pension by cleaning houses. He is tall, slim and he speaks with a Swiss-German accent. But there is something about his manner that tells you he has not spent his life cleaning.

The gold watch on his wrist for a start. It is a Patek Phillipe and on the back there is an inscription in Welsh – ‘Rwyn Dy Garu Di’– I love you.

It was one of the first presents Elizabeth gave Richard Burton when they fell in love while filming Cleopatra in 1963. Richard gave the watch to Raymond. Both he and Elizabeth showered him with furs, jewellery and money, because – for seven years – Raymond Vignale was one of the most important people in Elizabeth Taylor’s life.

He even kept soft-pom magazines in his bedside fridge in case they should want some extra bedtime stimulation. Elizabeth called them “religious magazines”. They called him Ray-baby and for seven years Ray-baby was always within shouting distance. Then in 1975, just before the Burtons remarried, Ray-baby had a nervous breakdown and tried to commit suicide.

The mental and physical exhaustion caused by serving the Burtons had taken its toll. No longer able to cope with Elizabeth’s unrelenting stream of demands, Raymond thought that at least they could remain friends, still see each other from time to time.

Poor Ray-baby. He sent birthday cards, Christmas cards, he asked for a job reference – and got nothing. The last time he saw Elizabeth was in 1985 at the Dorchester Hotel when she threw a memorial dinner for Richard.

Raymond Vignale has never before opened his heart about his intimate life with the Burtons. He says he is still haunted by Elizabeth. He dreams of her. He shouts her name in his sleep.

And one of his saddest memories was that night at the Dorchester dinner. “I had not seen her for a long time and I was so looking forward to talking about Richard and her children. All the guests, including the Welsh clan and Graham Jenkins, the brother Elizabeth called Grabby, were seated at a series of dining tables waiting for Elizabeth to arrive.

“Of course, she was late. She was always late. Then I saw her coming down the staircase, dressed in black, holding a handkerchief. She stopped at a few tables and then she was in front of me. ‘Darling,’ she said, kissing me. ‘You look wonderful’. Then she turned and walked off.

“Was that all I had meant to Elizabeth Taylor? I had almost lost my sanity serving her. I had not taken a holiday. I would not sleep till I knew she was asleep. But then of course I realised that is how Elizabeth Taylor has survived. I was like one of her ex-husbands, a closed chapter. I had served my purpose, given everything. So now it was goodbye Ray-baby.”

Raymond, a former night-club manager had gone to work for the Burtons in 1968. For Raymond the movie fan it was an awesome experience. “I first met aboard their yacht. She was wearing a lilac kaftan and a matching hat.

“When I asked her what I was supposed to do, she smiled and said ‘I drink Jack Daniels, my husband drinks vodka. All the food and entertaining I will leave to you. ‘Just make sure that there is a cold buffet for 12 every night – salmon, caviar and chicken’.

“Not once did they come back and eat that food – so every day it was thrown away.”

As well as the Burtons and their ten dogs there were the children. Michael and Christopher Wilding from her second marriage. Liza from her third, and Maria, then 6, the baby she adopted with husband No 4, Eddie Fisher.

“I always felt sorry for Maria,” says Raymond. “She was a little apart, the outsider. Elizabeth loved her children, but she wasn’t like an ordinary mother. She wasn’t that closely involved in their lives. When Liza had her first period she came to me. Once when Maria had to write her mother a letter of apology she began: Dear Mrs Burton. I had to tell the child to start again with Dear Mummy…”

In some ways Mummy was also a child. Richard was husband and lover, but Elizabeth needed a run-around she could confide in. As Raymond explains: “Richard wasn’t great company for Elizabeth, especially towards the end.

“Poor Richard, he used to be so pissed. When I think of the state that guy used to get into… the mess I used to have to clear up after him. It’s too horrible to talk about. They did not have friends, only drinking buddies. They might have been the most famous, but they were also the loneliest.” 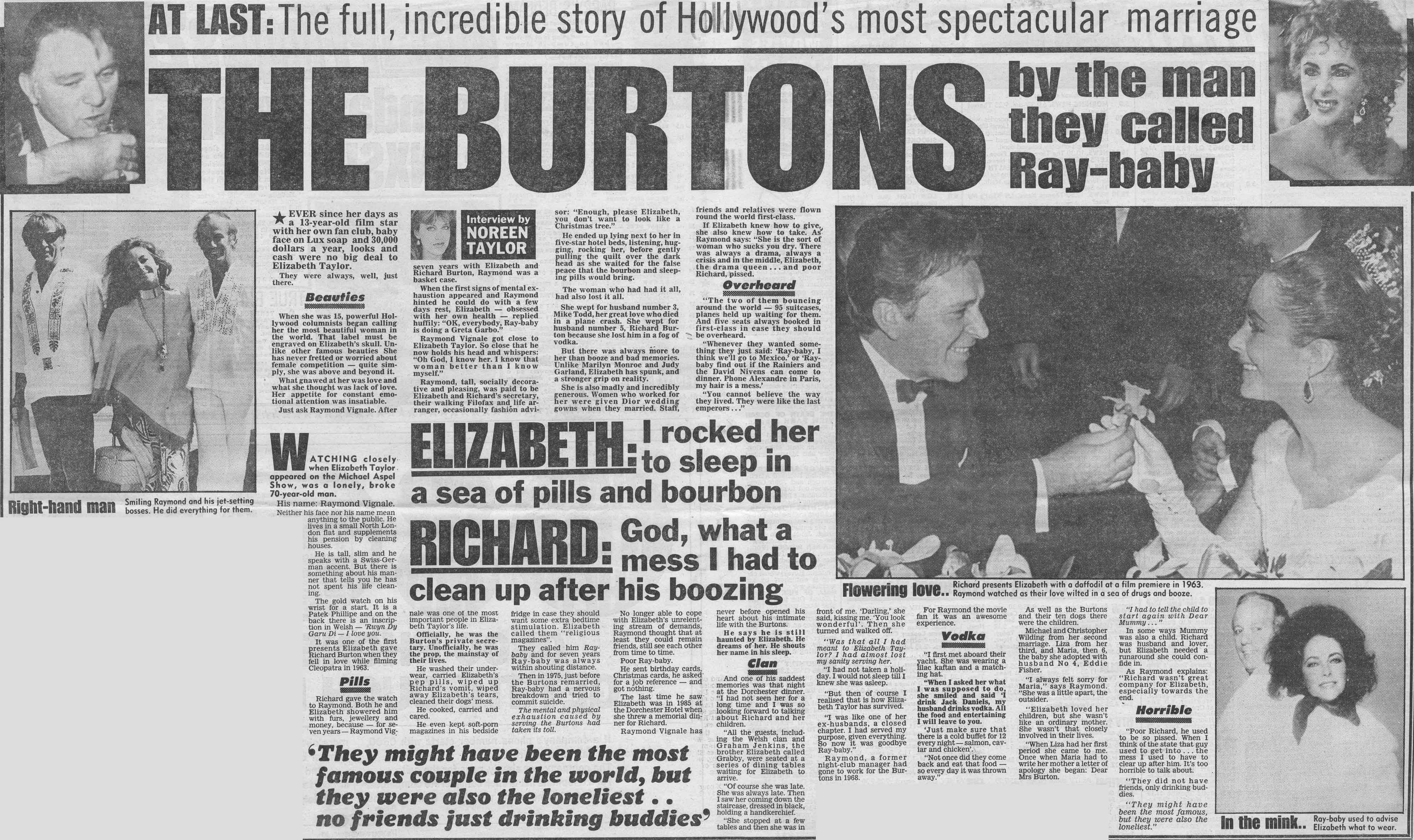