The cannibal in flat 213 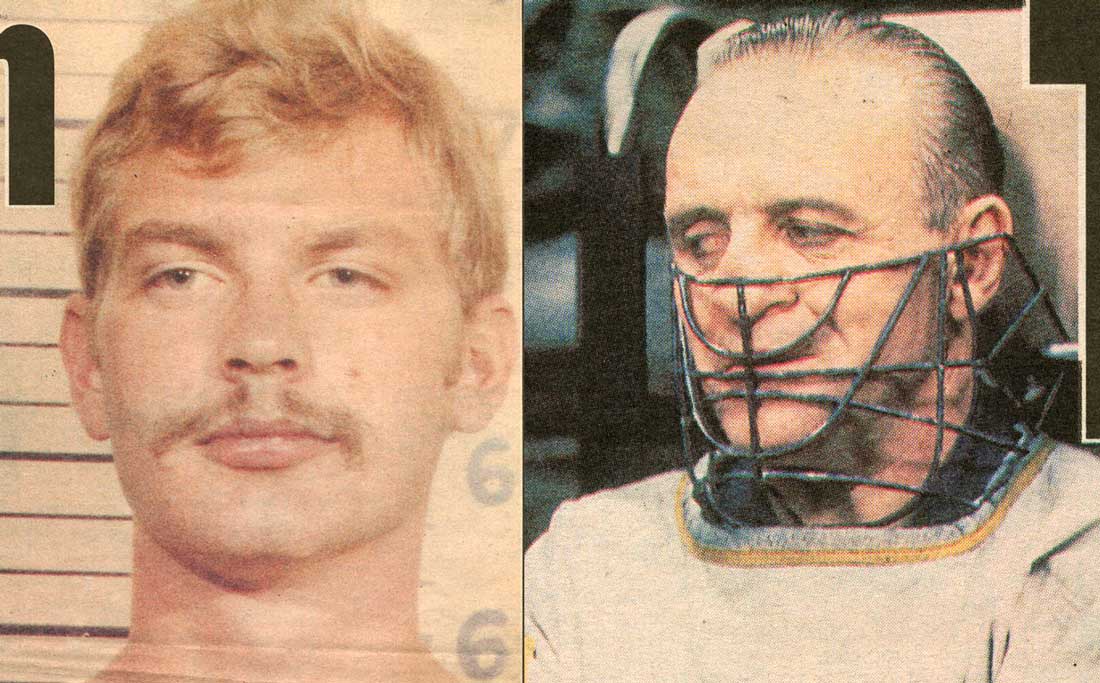 The long corridor leading to the small, seedy flat quickly fills you with a sense of unease. It is quiet. Empty. The people who once lived on the second floor of this apartment block have fled. In daylight, the fluorescent lights remain on, bathing the area in an unearthly pallor.

Then there is the smell. The sickly odour lingering around the door of Flat 213 that not even the strongest disinfectant can smother. Last July, when this door was thrown open, it revealed some of the most hideous sights ever recorded in America’s criminal history.

The spectacle that awaited Milwaukee’s murder squad was so horrendous officers needed counselling afterwards. What they found in 213 Oxford Apartments was nothing less than a human abattoir.

As the stench of the flat forced police to don masks, the occupant, 31-year-old homosexual Jeffrey Dahmer, was being led away in handcuffs, whimpering in soft, cat­like miaow sounds. The scenario that followed would inevitably be compared with the film The Silence of the Lambs.

Dahmer’s friendless life in Milwaukee, Wisconsin, enabled him to spend days undisturbed, sawing bones and preparing flesh-eating chemicals. In his kitchen stood a 57-gallon barrel of acid full of torsos, limbs and hands.

On the shelves of his fridge sat four male heads. There was no food. Only a human heart. Dahmer told police; “I was keeping it so I could eat it later.” Seven painted skulls sat trophy-like on shelves around the rest of the two-roomed flat. On the walls were more than a hundred photos showing mutilated men. The door of 213 is now locked and barred, its interior sealed forever. Not unlike the mind of Jeffrey Dahmer.

Blond, bland, blue-eyed Jeffrey sits in his cell in Milwaukee County Jail, staring into space, waiting for his trial on January 27, when he will plead guilty due to insanity. Depressed and withdrawn, Dahmer is being kept on constant suicide watch.

He is charged with the murder of 15 men, although he has confessed to killing 17 and to committing acts of cannibalism. Gerald Boyle, the top lawyer hired by Dahmer’s father, first met him in 1988 when he was charged with child molesting.

Boyle says: “No-one suspected then that he had already killed people. He seemed to me to be someone who wanted to be rehabilitated. My problem now is making sure I see him most days in order to keep him mentally occupied. If total withdrawal sets in, then he could dis­ integrate.”

As to how the elder of two sons from a prosperous middle-class background began his descent into hell, no-one knows. Lionel Dahmer, a research chemist, divorced Jeffrey’s mother, Joyce, in 1978. Soon afterwards he married Shari Jordan. From their home in Ohio, Shari spoke to me of the horror befalling the Dahmer family and of her husband Lionel’s anguish.

“The pain for my husband is dreadful. But I knew when I first met Jeff that there was no hope of him becoming one of life’s achievers,” says the blonde businesswoman. “He was 18 then, practically an alcoholic, and beyond my help, so I concentrated on the younger son, David.

“We are all searching for answers,” she said. “We talk to Jeff during our visits and he doesn’t have any clues either. None of us know why, out of two children with a similar upbringing, one should become a killer”.

Dahmer’s days at Richfield High School, Ohio offer some clues. Classmate Martha Schmidt remembers him as “a lost, tortured soul I felt sad for. I used to see him drinking Scotch, and I’d ask him why he was doing that. He’d just say, ‘It’s my medicine.’ His idea of fun was to impersonate handicapped people. He would roll around the floor in class, behave in a way he thought was outrageous, but to the rest of us was just attention-seeking, goofy and pathetic.

“It seemed so clear to me that for years he had been saying, ‘Pay attention to me.’” In other words, Dahmer was the school wally. Neighbour Eric Tyson said Dahmer kept chipmunk and squirrel skeletons in a shed. “People recall him impaling animals like frogs and cats.”

Aberrant behaviour such as this suggests a deeply disturbed child. One who feels unloved. A school official suggests Dahmer’s feelings of neglect began as early as six years old, when his brother, David, was born. His mother Joyce was then ill, and shortly afterwards the marriage became so hopeless they had separate bedrooms.

Friends talked of how Dahmer’s father would string up bells outside his room to warn him of Joyce’s arrival. Years later Dahmer would confide to a probation officer: “If I could change anything in my childhood, it would be the way my parents behaved towards each other.”

It was all too much for Jeffrey to handle. He needed an escape route. Police were told he had been lost in a fantasy world since childhood, and that alcohol aided his escape. In that private place he created, Dahmer was king. Everybody paid attention to him. Nobody laughed at him, or walked away when he came into a room. He was popular, clever, charming and powerful.

And very soon Jeffrey was going to enact some of those powerful feelings he felt when he was in his private place. When his parents divorced, his mother moved away with his brother, and his father left to marry Shari. So, Jeffrey felt more abandoned than ever.

He was 18, home alone, waiting to begin life at Ohio State University, when one day while out driving he spotted a young blond man trying to hitch a ride. Jeffrey invited Stephen Hicks home. “I’m all by myself since my parents left,” he told him.

They drank beer, played music, and then Stephen made a terrible mistake. He said he must go. Jeffrey knew what he had to do. He took a dumb-bell and smashed Stephen’s skull into a bloodied pulp. He then hauled the body outside, and with the long hunting knife he had used on animals, sliced up Stephen’s body and buried his remains in nearby woods. Perhaps Jeffrey shocked himself, because he did not kill again for nine years.

But in the meantime, he would be found guilty of child molesting and given five years’ probation. Jeffrey only lasted one term at university before enlisting for six years in the US Army. He was discharged after three for excessive drinking. He drifted around Florida before returning to Milwaukee to live with his grandmother, Catherine Dahmer. There, he found a job draining blood in the Milwaukee Blood Bank.

While living in his basement flat, Jeffrey began to invite male friends he fancied round for beers. He found them stalking the shadowy streets of the city or hanging round the Greyhound bus stop. The initial request must have seemed harmless. Would you like to come back with me, have a beer, watch videos?

He was a nice-looking guy, so the victim was easily seduced. What his grandmother didn’t know was three of the friends he brought home never left. They were killed, dismembered and then buried in the grounds around her house.

His grandmother suspected nothing. Jeffreywas a helpful boy, lovingand thoughtful enough tohelp with tasks like mowing the lawn. His next job, labouring in the Ambrosia Chocolate Company, lasted six years, until he was fired for erratic time-keeping.

A social outcast from his well-placed family, he was a continual source of worry to them. “I know,” said Shari. “But since his arrest, Jeff hastold me that nothing more could have been done for him

“He doesn’t know why he did those terrible things. He told me if he’d been caught after the first murder in 1978, it would have been a blessing. I cannot describe to you what a nightmare this has been. All I will say is every parent should realise that there, but for the grace of God, go I.”

When Shari talks of her step-son, she is not dwelling on the character known as the Milwaukee Monster or Dahmer the Cannibal. Unbelievably, she said to me: “If you could meet Jeff he would wring your heart out. He is such a sad person, he brings out all your maternal instincts. He has told his parents and me not to blame ourselves, and that when the trial is over he will sit down with us and thrash things out so we can all have peace of mind.”

Lionel Dahmer seems as bewildered as his wife. He has described his son as difficult to get close to, a boy who lied. But not in a million years did he imagine what he was. Yet the psychological clues were there. Jeffrey Dahmer,the eternal outsider incapable of forming a relationship, had all the classic traits of a serial killer.

NB:Dahmer was serving 16 terms of life imprisonment in a Wisconsin jail when he was murdered by a fellow inmate in November 1994 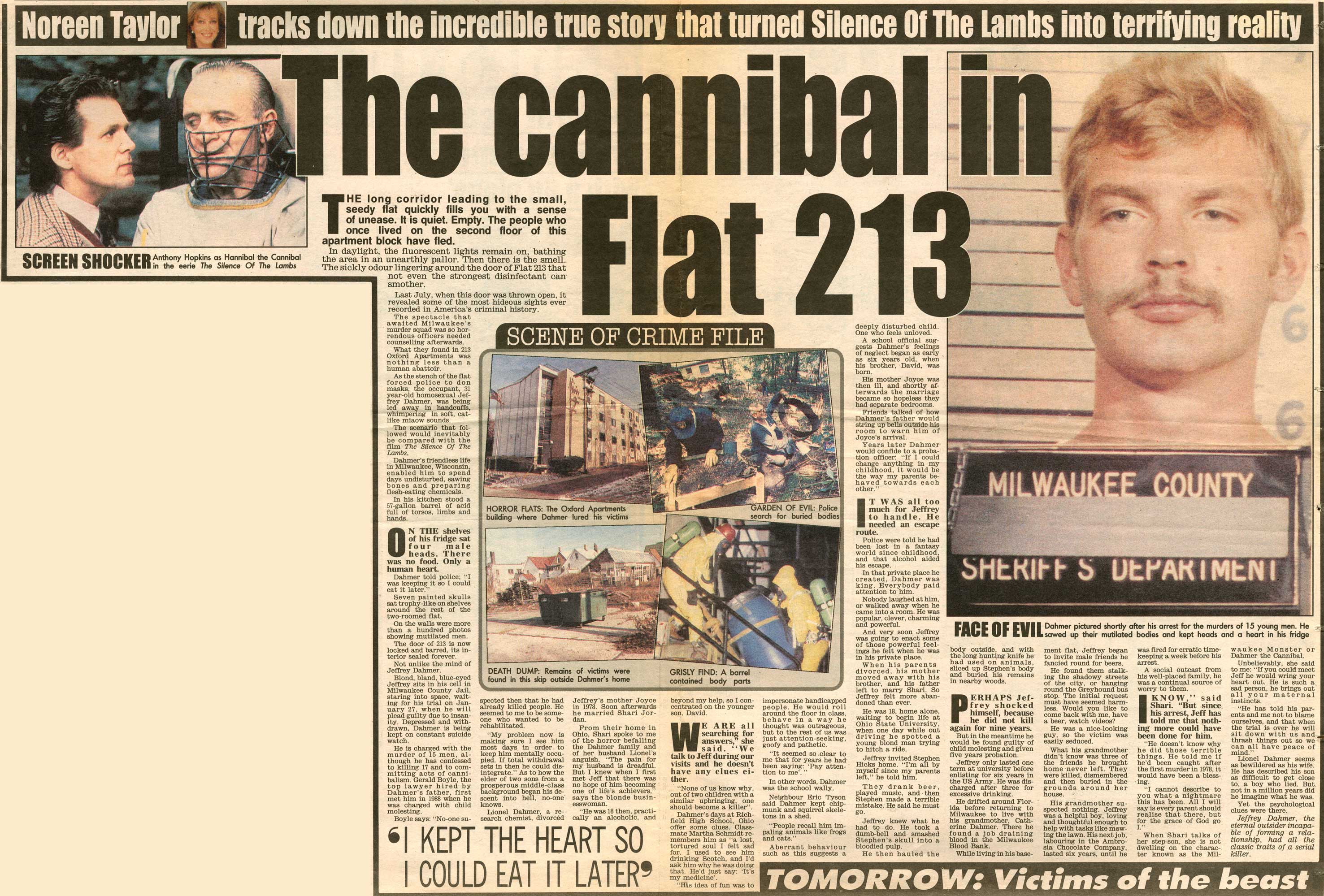