The Circuit comes to town 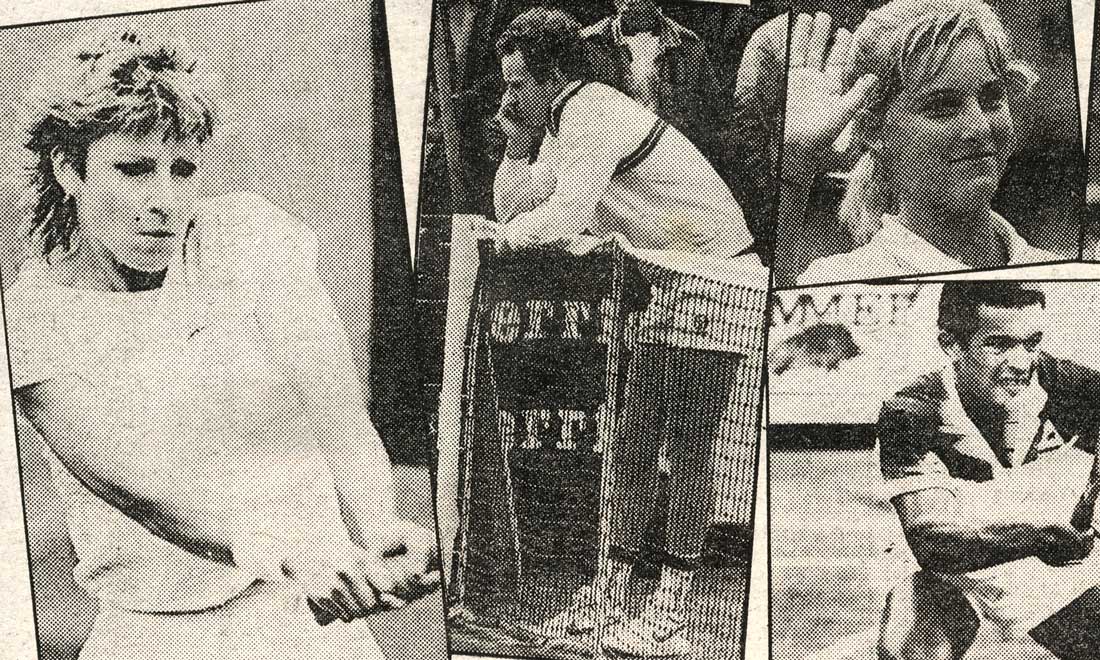 The world’s top tennis stars are being well looked after. Even before they go on court, big decisions must be made. So the back-up team meets…

“If Chrissie gets a limo, then Jimmy will want one. You know what he’s like if he thinks he’s missing out… Now, what about Martina? Somebody taking care of her flowers every day? McEnroe… maybe he needs more security…”

Whatever he needs he gets. Be sure of that. For, in the build-up to Wimbledon, I’ve been seeing how this small; expensive, exclusive bunch of stars are treated like royalty as they travel the tennis centres of the world.

Ted Tinling, the former tennis wear designer, has been hired by the Wimbledon authorities as a social go-between for the players. Every player except McEnroe, that is.

“Let’s say that McEnroe and I decided early on I that we would have certain communication problems,” says Ted, with an impatient wave of his heavily-jewelled wrists. “So now I deal with his father and everybody is happy.”

But McEnroe looks extremely miserable. His girlfriend, Stella Hall, has not been to any of the recent tournaments. That, according to locker room gossip, means the romance is over.

Unlike Jimmy and Patti Connors, the born-again sweethearts, who have decided they want to stay together after all.

Both sit at the players’ coffee bar, arms entwined, love-struck smiles on their faces. Somebody congratulates Jimmy on a recent win. Jimmy shrugs and shouts back: ‘‘I’ve got something else to be proud of now, anyway.”

He zooms in for another kiss on Patti’s beautiful upturned lips. Yannick Noah’s new wife, Cecilia, is so mesmerised by the Connors that she rushes up and asks them to pose for her camera.

Tennis wives are a special breed. They travel the world with their rich, tennis-obsessed husbands, dressed to the nines, gold watches and huge diamonds dripping from their tanned, manicured hands with nothing to do except shop and wait.

American Brian Gottfried’s wife, Windy, looks like Jaclyn Smith and dresses like a cat-walk model. She says: “We always travel together with our two children and the nanny. I only see our home in Florida for a few months of the year… but then, I guess, I see my husband a lot more than an office wife would.”

Because Windy, an ex-airline stewardess, has been on the circuit for ten years she is able to give the newer wives a guide to the best couturiers in town.

Since there is little else for them to do, you can’t help noticing the slightly glazed, empty look on their pretty faces. Quite the opposite of the gorgeous groupie-girlfriends who follow their men with bright, expectant eyes and loud giggles, totally enraptured by the novelty of being with someone famous.

One wonders what the sensible Jo Durie makes of it all. This shy but friendly Bristol girl, the No 10 in the world and Britain’s hope for Wimbledon – she is the No 10 seed – says: “I don’t mix with many players. There isn’t a lot of friendship or support among top women.

“Last year, I was supposed to share the star dressing room with Chrissie and Martina. First time I walked in no one spoke. They looked me up and down and asked if I had a permit to get in. I couldn’t be bothered with all that… so I just wandered off and sat in the second-class one with everyone else.”

Jo, 23, admits that constant travelling and hanging around between matches is boring. “I’m only here for the tennis and because I want to be number one. I can’t understand people who are content to be in the first twenty. Look at Virginia Wade and Billie Jean King who are still playing for the sake of it.” She shakes her head in disbelief.

“It’s a lonely life,” says Jo. “You have to put marriage and boyfriends second because tennis must have top priority.

“At least, men have their female groupies following them.

Jo’s coach, Alan Jones, interrupts with a cackle… “Not only the men. I could name a few women players who have them as well.” Jo silences him with a warning look.

Carling Bassett has no intention of removing boys from her mind. Sixteen-year-old darling Carling – “of course I wear my aquamarines when I play” – wants it all. From the looks of Carling she has it all. Mummy’s family are the founders of Carling Breweries, and daddy owns a film company.

Carling, who ranks No.19 in the world, also models with the prestigious Ford agency in New York. “Oh Gawd, I just think he’s so cute,” she gasps, her eyes wandering over your shoulder at some long-limbed player. “Sure, I go for all that… like dancing, boys and make-up. There’s a lot more to life than tennis.

“I guess I’m spoiled with good-looking men, I’m not interested anymore unless they’re tall and slim like these guys. Have you seen Yannick Noah’s body? Oh God, he’s just perfect.”

But then they all are, as far as looks and bodies go. A clutch of muscular clones who are dedicated to swings, volleys, top pins, backhands.

Ted Tinling says: “My dear, when they reach the top they are stars. They should be treated like film-stars were in the Thirties. They should be making demands of me… asking for champagne to fill their baths…”

Poor Ted, he would have been so disappointed if he’d seen multi-millionaire Martina in the players’ canteen wondering

why she couldn’t get extra cups of tea on her luncheon voucher. The extra would have cost 75p. Martina thought for a moment, frowned and said: “Forget it.” 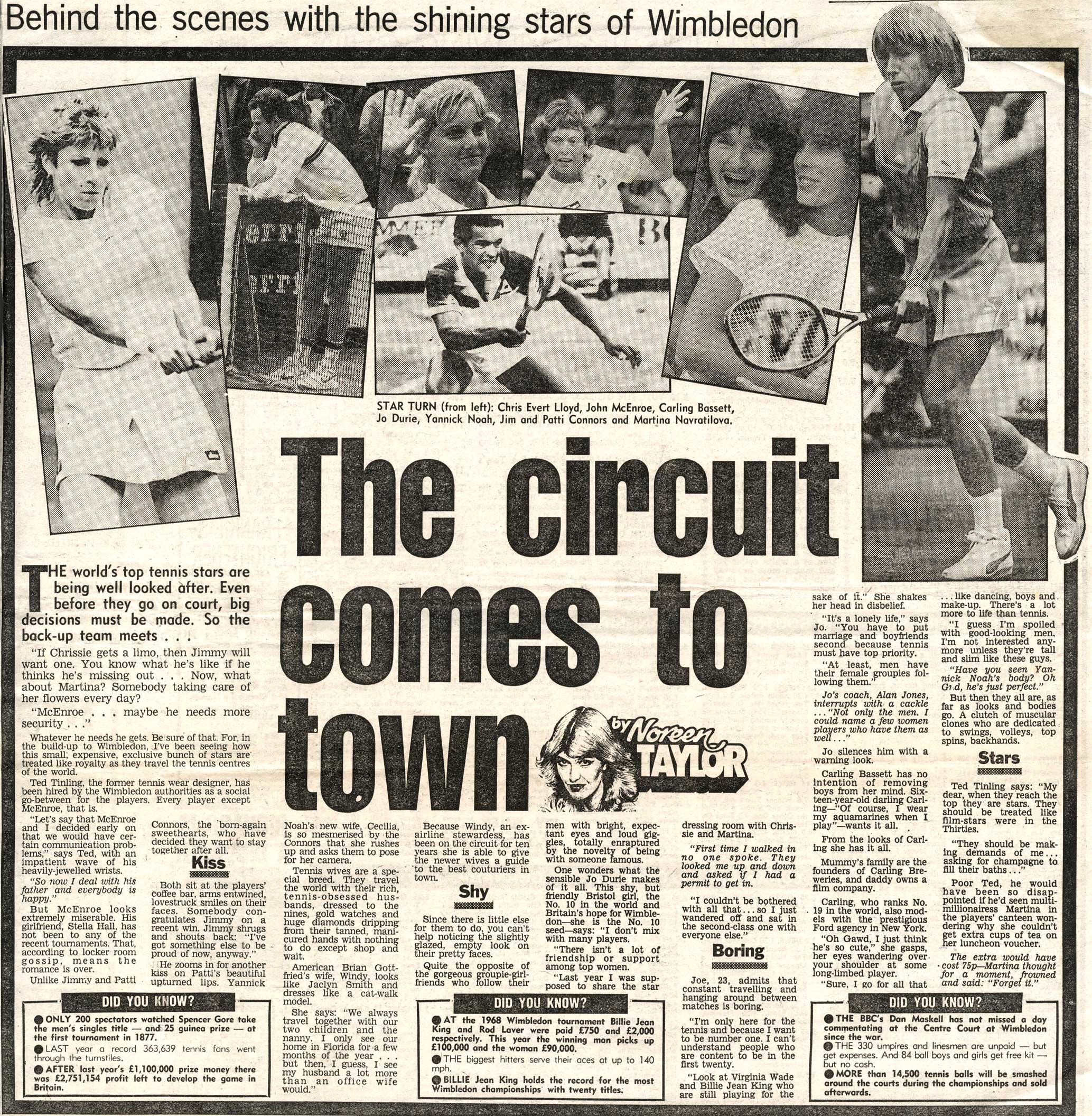