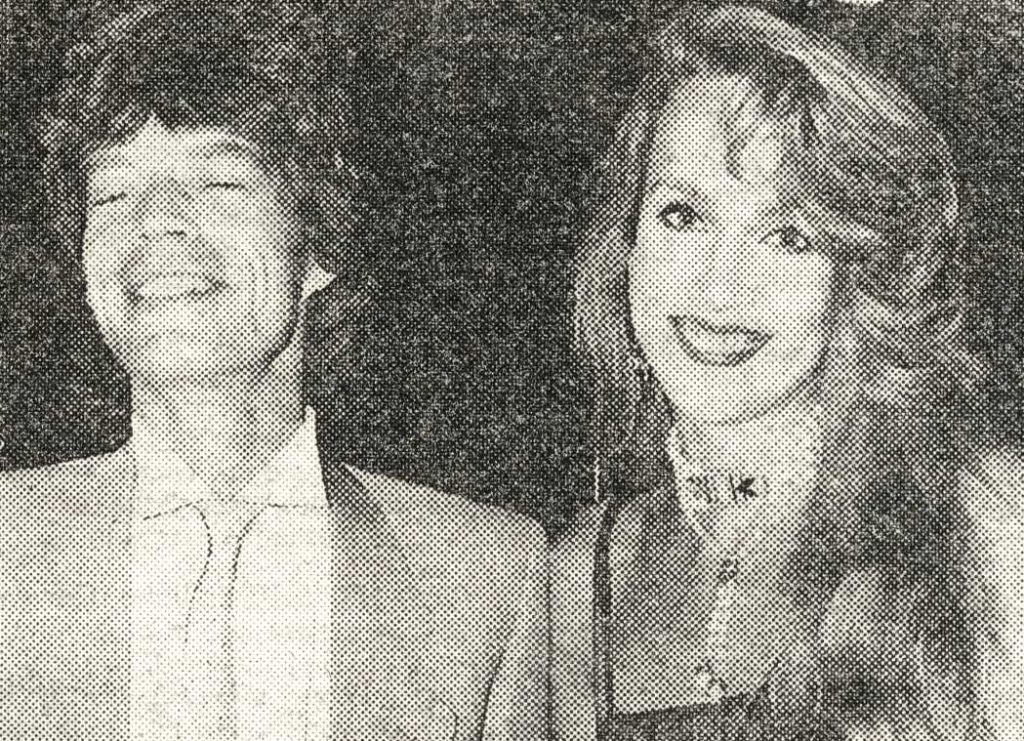 They are the girls who have everything – beauty, money and famous men. Jerry Hall, Mick Jagger’s girlfriend, and Marie Helvin, David Bailey’s wife, are best friends. Tall, young and lovely, they make a divine duo as they step out for a night together on the town. Here they talk about their fears, their loves and the ritzy lives they lead…

Marie Helvin is one of the world’s most beautiful women. It’s impossible to find a flaw. That black mane of hair spilling down her back in a mass of curls. Those long, long slim legs. The exquisite, tiny waist.

And that face. The skin is like creamy-white satin, the eyes almond-shaped, the effect mesmerising. But the lady herself is never quite sure.

She says: “Once I bought up every Vogue from the newsagents near our house. That was 150 altogether, because I couldn’t stand the sight of myself on the cover. “Vogue told me later that they had never sold so many copies of an edition so quickly.”

Marie does not share the world’s view of her beauty. A beauty which commands £1,000 for a photographic session. “I’ve always been critical of my looks. As a kid I admired blondes with big tits. Nowadays I change about four times before going out. Even then I’m not satisfied. You see, I know I’m not beautiful, but I do know how to project myself so people think that I am.”

Some projection. As Marie walked into the swish restaurant to meet

Me, I noticed men suddenly forget the women they were lunching with. Marie does not seem to notice the gaping mouths and bulging eyes. She’s worried about turning thirty.

“Look at these pores on my cheeks and these little red veins on my chin. Nothing will ever be the same again. No, it’s sweet of you to tell me that everything is fine, but I know thirty is the turning point.”

Marie’s famous photographer husband, David Bailey, deals perfectly with her fragile ego. He says: “She has the best body in the world. She’s got mystery. In the Sixties, they said that Jean Shrimpton was the girl you would like to live next door to.

“Well, you don’t think that about Marie. Men look at her in the way they look at a Rolls in a shop window. She’s expensive, untouchable, but nice to look at.”

Bailey is a small, scruffy likeable man with a pale face and a voice that someone once described as belonging to a Cockney eunuch – but he knows a lot about desirable women. He lived with Jean Shrimpton for three years before marrying French actress Catherine Deneuve.

Marie doesn’t mind discussing her predecessors who have shared Bailey’s dark, Bohemian north London house. “When I told my father I was going to marry Bailey he laughed, and said, ‘That guy was married to the most beautiful woman in the world. What the hell does he see in you?’”

Marie’s father is American, her mother Japanese. Marie says: “I was brought up in Hawaii and my father bought me an air ticket to Japan for my sixteenth birthday. It was his way of telling me to go out in the world and earn my own living.

“I never thought of modelling until I reached Japan where this woman offered me a three-year contract. I returned all the money I made home and my father would send me a weekly allowance. He taught me to be real careful with money. Even now, I rarely go out with more than £10 in my bag.

“I never bother with fashion trends because clothes are a waste of money. If I want something like a rah-rah skirt, then I’ll make one. Jewellery is fine as long as 1 don’t have to buy it. As for evening gowns, you must be joking. Those dresses you see Jerry and I in are borrowed from designer friends. I’d rather buy land than a taffeta ball gown.’’

Jerry is, of course. Jerrv Hall – Mick Jagger’s lady and Marie’s best mate. “Jerry is so generous, always buying me things,” Marie croons in her soft American voice. “Mick, Jerry. Bailey and me – we get on real well together. So, when Bailey doesn’t want to go out, and Mick’s away, then me and Jerry we dress up, go out to parties and meet all sorts of people.’’

When Marie comes back from lunch she pokes her head round the studio door and Bailey asks: “Hey, we going out tonight?’’ Marie shrugs nonchalantly because every night’s an out night. Bailey says: “I’d much rather stay home and print instead of going out to premieres – it’s Marie that likes the social bit.”

Her love for 44-year-old Bailey seems to be the one enduring feature of her life. A soft mile spreads across her face as she tries to describe her feelings for him. “He’s a real man. The kind of guy you can rely

“He’s confident, sure of himself, never jealous or possessive. I think of him when we are apart and I get this lovely warm glow. I miss having his arms around me when we’re in bed, so I phone just to hear his voice and I’m all right again.

“Maybe that’s why I don’t plan on having any children. I’m scared they would come between us. I don’t want him to get used to me or take me for granted sexually. I think he is still turned on by me, the way he was in the beginning, and I work to keep it that way. And we don’t fool around with other people.

“No chance of me going off and having an affair, not with Mr Macho around. Anyway, I’ve been with him so long now, sex with a stranger wouldn’t seem right. Exciting maybe… but no, I’m happy the way things are.”

She points to her white trousers and says: “They’re almost worn through. Sometimes I think I should splash out and enjoy myself. But then, I worry, what if something happens to my family or Bailey?

And my face won’t last forever, will it?”

It was not easy for Jerry Hall to leave Mick Jagger’s bed in the Savoy Hotel before midday. The lazy smile spreading across her face as she drifts downstairs to the cocktail bar explains everything.

“Ah could easily spend fifteen hours a day in bed, but not on mah own,” drawls the long, languid, 26-year-old Texan. “Ah have to sleep with someone, an’ if Ah didn’t have Mick Ah reckon Ah could become real promiscuous.”

The Hall drawl is something special. Like the curtain of corn-coloured hair that once earned her £25,000 for three days’ work on a shampoo advertisement, and the legs that commanded £15,000 for a day spent making a jean’s commercial.

Yes siree, out of bed our Jerry is no slouch when it comes to making money. “Ah’m real tough when Ah’m dealin’ with cash. Did you bring along the money for mah fee?”

When I said it would take a while, the round high forehead creased

“That’s a pity,” she said with the forlorn look of someone down to their last pound. “It would have come in real handy for mah holiday.”

The holiday will be spent in Mick’s French chateau, and if they get bored with France there is always the house in London, the villa in

Mustique, the apartment in New York or the two ranches in Texas.

Money and Mick seem to be the two main passions of Jerry’s life. “Ah’m real proud of Mick, but ah don’t know if Ah could have coped with him when he was younger. At twenty-nine he would have been real difficult because he was takin’ drugs all the time then, an’ Ah would have hated that.

“He doesn’t take anything now. Ah’d like to think Ah helped turn him on to a more healthy lifestyle. He doesn’t even smoke now, an’ he doesn’t like me smokin’ neither – he’s real fit, y’know.” After all of Jerry’s “y’knows” she lolls her head to one side and sniggers.

No wonder Jagger loves her. After previous uneasy, competitive relationships with Marianne Faithfull and the inscrutable Bianca, five years of Jerry must seem sheer, uncomplicated heaven. “Ah never scream or come on all neurotic with Mick. Although mah friends say Ah should act up a bit sometimes.

“Maybe Ah’d get mah way more often if Ah played drama queen. But Ah just couldn’t do that to Mick. Ah’m a real easy, happy person, an’ the only time Ah get kinda nervous is when we go to parties an’ all these females crowd round him, vampin’ like mad. Ah hate that.”

So how does Jerry handle the vamps? Flash them a cold, hands-off stare? Jerry sniggers. “Ah give them a kick. Not that Ah don’t like pretty women – me and Marie Helvin have the greatest time together.

But Ah’m not the only one who gets jealous,” says Jerry smoothly.

“You should see Mick when Ah come on tour, all dressed up, an’ Ah’m the only girl around. The boys kid me on, an’ Mick gets real angry.”

It isn’t clear whether they both feel the same way about marriage.

Jerry smiles coyly and says: “If Ah’d been through a marriage like Mick’s, Ah wouldn’t be too keen to do it again. Anyway, if we were married maybe he wouldn’t treat me so good. Men change once they know they’ve got you, an’ Ah wouldn’t like that.

“Right now, Ah feel Ah’m his wife, what with fixin’ the food an’ designing all the houses.” Jerry’s own mother didn’t like the idea of Jagger turning her daughter into a live-in lover.

Jerry says: “Mah folks thought he was bad… real bad. Ah’ve taken Mick to meet mah mother, but she still isn’t sure about him. She can’t understand his accent. Mick’s nothing like his publicity, y’know. He’s real intelligent an’ he’s got a great business mind.

“He knows everythin’ about the stock market, so he’s always advisin’ me what to do with mah money.” Jerry has always had ambition. Right from the day she left Dallas airport with a back-pack and headed for St Tropez.

“Ah was sixteen, an Ah thought France sounded real glamorous. Y’see, mah mother was pretty, but she got married an’ had five daughters, so she didn’t want the same thing to happen to me.

Ah was hangin’ around St. Tropez when a guy came up an told me he ran a model agency. That’s how it started, an’ if it hadn’t been for mah mother, Ah guess Ah’d still be back home, married to the guy at the local gas station.”

It’s difficult to imagine this golden girl who flits from country to country as anyone’s small-town wife. Upstairs, in the Savoy bedroom she was posing for us before packing for Paris and Royal photographer Norman Parkinson.

Two days before she had flown in from her Texas ranch to Ireland, and then on to Leeds. Despite this travelling marathon, Jagger’s prairie rose shows no sign of wilting, unlike the tired-looking man himself who appeared momentarily at the doorway to mumble: “So you’re all in here, then.”

The smile left Jerry’s face as she leapt from the sofa to follow the despondent Jagger into another room. “We won’t be a minute, darling. Honest,” she crooned softly.

Her carefree manner had become tinged with anxiety. Even Jerry Hall must come to terms with the man who sang, Under My Thumb. 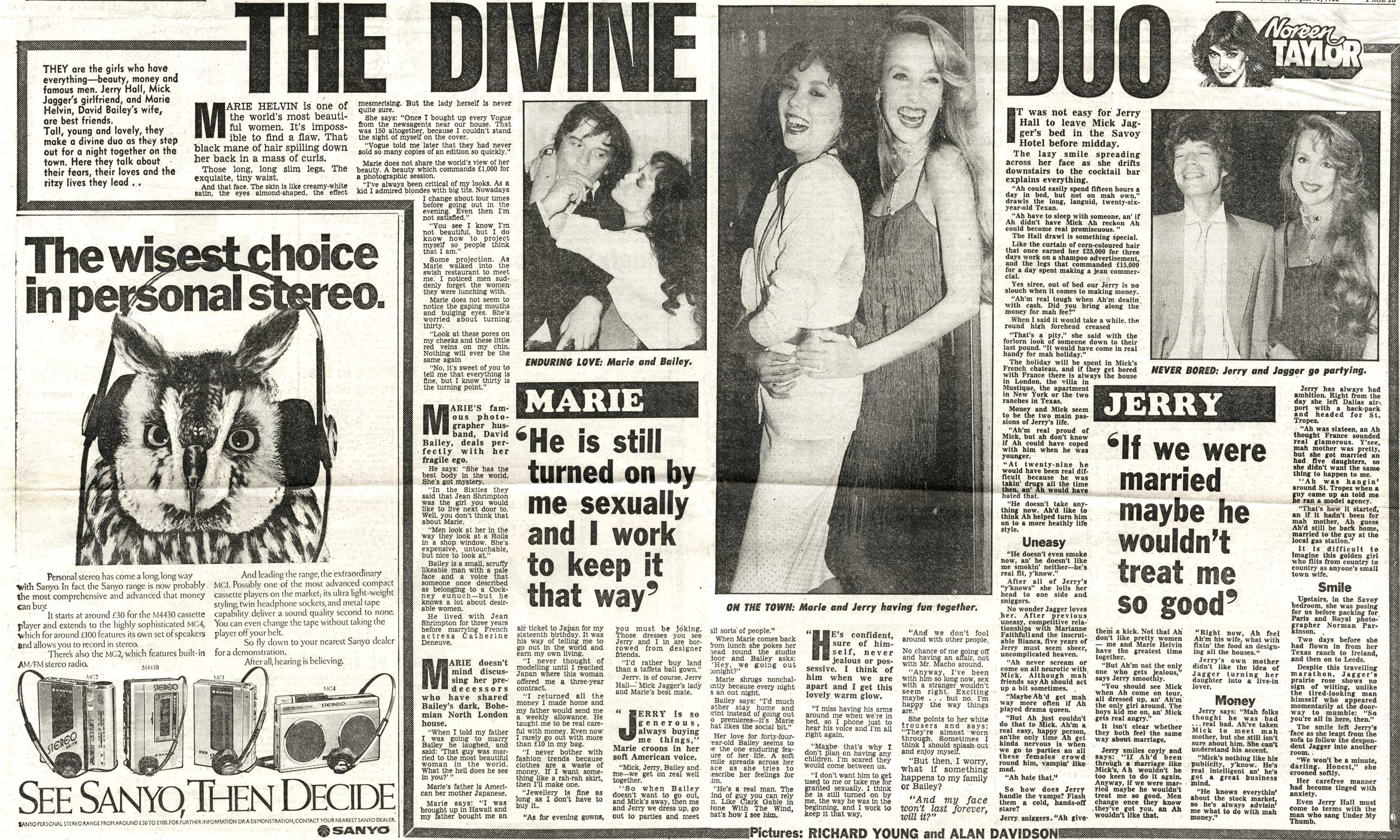