The Duchess of Soap

Interview with the Duchess of Argyll published in the Daily Mirror, November 1985 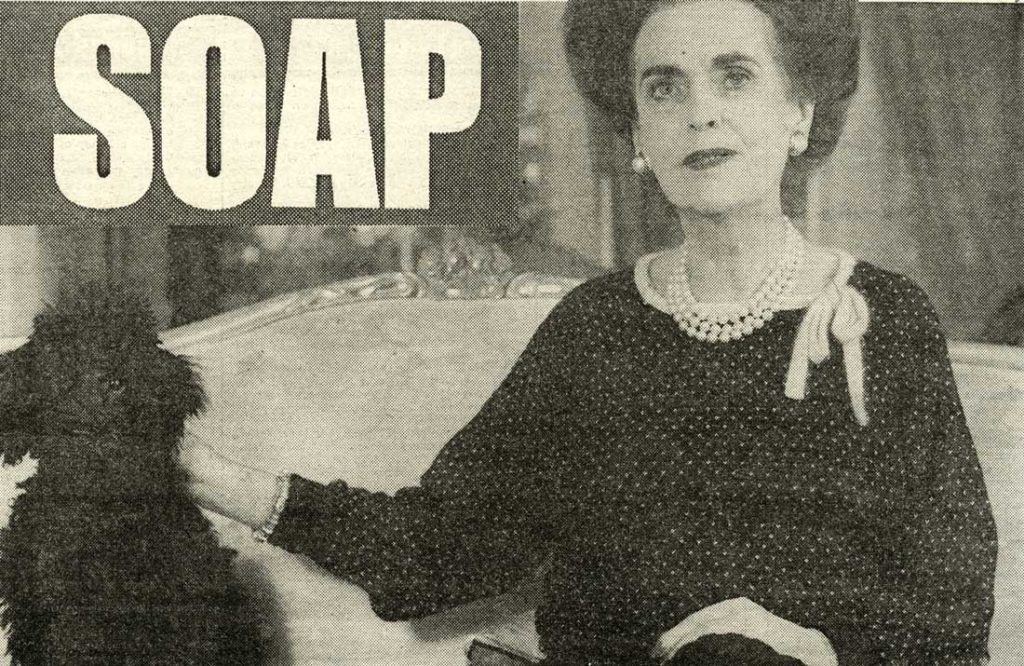 Clearly the Duchess was irritated. When she agreed to star in The

Legacy, the £17 million British rival to Dynasty, it all sounded such marvellous fun. A saga based on London’s high society, with appearances from everyone from Bardot to Princess Stephanie to Lord Olivier, must have seemed an interesting diversion to one’s social rounds.

But now, months before the first episode is even shot. Her Grace was being asked by the producers to talk about the 13-part series to Terry Wogan and the Mirror. From the Mayfair doorway of her silk-lined drawing room, you could hear the imperious tones ring out:

The television publicist could only gulp: “Sorry duchess. Now, about the Mirror, she won’t need more than an hour of your time.” The pale, beautiful face of Margaret, Duchess of Argyll appeared round the drawing room door. An hour,” she declared in amazement. “I have to be at Harrods in half an hour. Out of the question.”

Oh, eat your heart out Joan Collins. Against Margaret of Argyll there is no contest. This one has been spoilt, cosseted, adored for all of her seventy-odd years. Her every whim has been catered for, so why change the habits of a lifetime?

Eventually, she did sit down and talk. But she is cautious, distrustful in case once again her past is held up for examination in the headlines. “I hope”, she says frostily and in the sort of accent you hear only in Thirties’ films, “you’re not going to drag in that divorce and the business about my family. It’s virry, virry dreary, and young people will not want to know.”

On the contrary, dear duchess, a biography as fabulous and fascinating as yours is almost beyond the imagination of any soap script writer. She was born Ethel Margaret Whigham in Newton Mearns, Glasgow, around 1912.

An only child of a millionaire industrialist, she grew up to become one of the most beautiful women of her generation. When she was nineteen she married Charles Sweeney, an American millionaire golfer. The crowds were so great police had to close off roads round Hyde Park.

At the mention of her first husband, the still lovely red lips curl: “Charles was the best-looking man in London and I’m afraid rather fond of flirting. I wasn’t going to put up with that,” she says, slamming the handbag with a coronet above the initial ‘M.’

During her first marriage she gave birth to a son, Brian, and a daughter, Frances, who has since become the Duchess of Rutland

In the early Fifties, Mrs Sweeney became the Duchess of Argyll, wife of the 11th Duke, and mistress of Inveraray Castle in Scotland.

“My father’s money renovated that castle. Now I’m not allowed near the place.” A tense silence follows because she knows what is coming next. In the early Sixties, the Argyll divorce was one of the nastiest, lurid, most gossiped about in history.

In 1960, the Duke began divorce proceedings, citing four men. Evidence included a number of photographs – one featured a naked

man wearing a mask. He was rumoured to be a member of MacMillan’s cabinet.

The duchess cross petitioned, naming her own stepmother. The petition was eventually dropped and a libel suit followed, costing Margaret £25.000. During the trial she was projected as a promiscuous, oversexed woman. Was she distraught afterwards,

I ask? Was she ashamed to meet people, embarrassed to go out in the street?

“Not at all.” she replies airily. “Just angry that I lost. A great injustice indeed. He, of course, was thoroughly miserable.” Why, because she left? “No. Because he was thrown out of Scotland after writing six articles against me in The People.”

More dramas followed. Margaret, Duchess of Argyll, hasn’t spoken to her daughter, the Duchess of Rutland, for 17 years. Nor has she seen her three grandchildren, one of whom is Lady Teresa Manners, singer with the Hooray Henry band, Business Connection.

Now this is where real life gets better than soap. When the Duchess was approached by the co-producer, Simon Napier Bell, who also happens to be Wham’s manager, Lady Teresa was waiting in the wings for a part as well.

According to the film people, she was wonderful, a natural actress. But when they offered her a starring role she turned It down. The film people say her parents wouldn’t allow her to accept because of her grandmother’s involvement. “Sad, isn’t it?” says the duchess. “Why can’t my grandchildren visit me and make up their own minds?

“No. I’m not sad at not seeing my daughter. I have enough friends, most of whom I prefer to her anyway. She’s probably suffered more than I have since she’s the guilty one.”

What actually happened sounds so trivial it’s hard to believe that she’s been banned from her daughter’s home, Belvoir Castle, for seventeen years. The row began when the duchess was in the London

Clinic with a broken hip. Her daughter didn’t visit, so the duchess assumed that the large bouquets of flowers were from her daughter.

She wrote a thankyou note to Frances, then found out that the flowers were from someone else. Frances, meanwhile had done nothing to correct her mother’s mistake. A note containing a reprimand followed from Margaret and the breach began. Although Margaret now claims to be bored with this tiresome episode.

Her face lit up for the first time during our conversation when I told her of the extraordinary likeness between herself and Lady Teresa.

“Do you really think so?” she beamed proudly. “I’d like to see her even though she sounds tough and rather arrogant. And what’s she doing singing in this band? Such a waste of time. She’s 23 isn’t she? She should be married.”

The subject was closed by a swift, grand movement of the hand.

“Enough, enough… I’m supposed to be talking about The Legacy.”

Looking at the pale, powdered face, barely lined, the dark dramatic eyebrows framing the deep green eyes, is to understand why Cole Porter wrote You’re The Tops in tribute to her beauty.

“I’m virry excited about this series. No, I shan’t have to learn any lines, as I’m playing myself. I shall be able to choose my own clothes and jewellery. I’ve been watching Joan Collins and although sometimes I think she looks virry pretty, I do wish she wouldn’t wear furs for breakfast and scarlet for luncheon.”

And she added: “Girls nowadays do lack a sense of style. I mean, look at the Princess of Wales. A great beauty, but why is she allowed to go out dressed up like a man with bow ties and sailor hats? Ah, if only you could have seen the girls of my generation. Now I really must go.

And don’t go on about the past, the future is always more exciting.”

In the case of Margaret Duchess of Argyll, it certainly is. 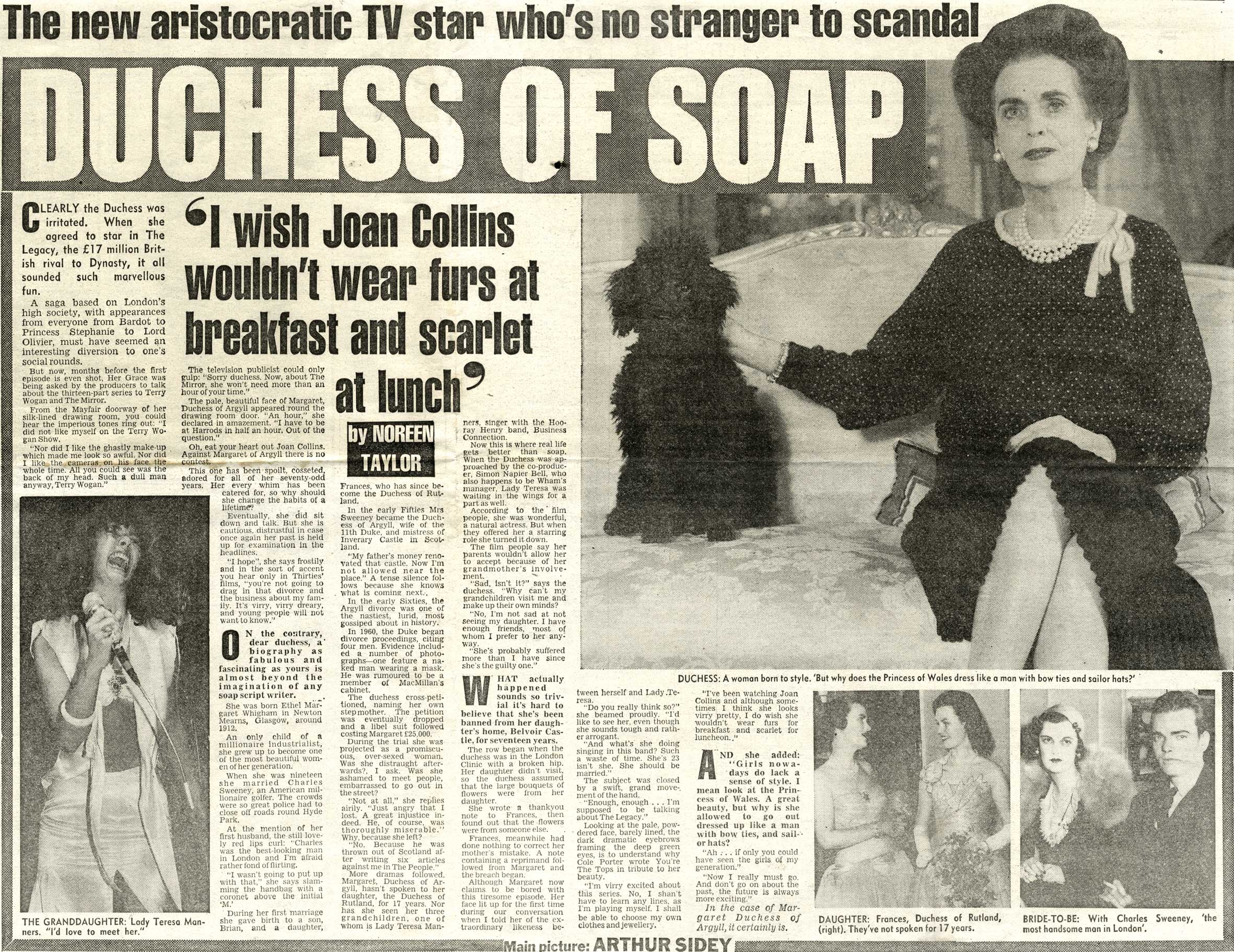