The Genius with a soul — Bill Gates 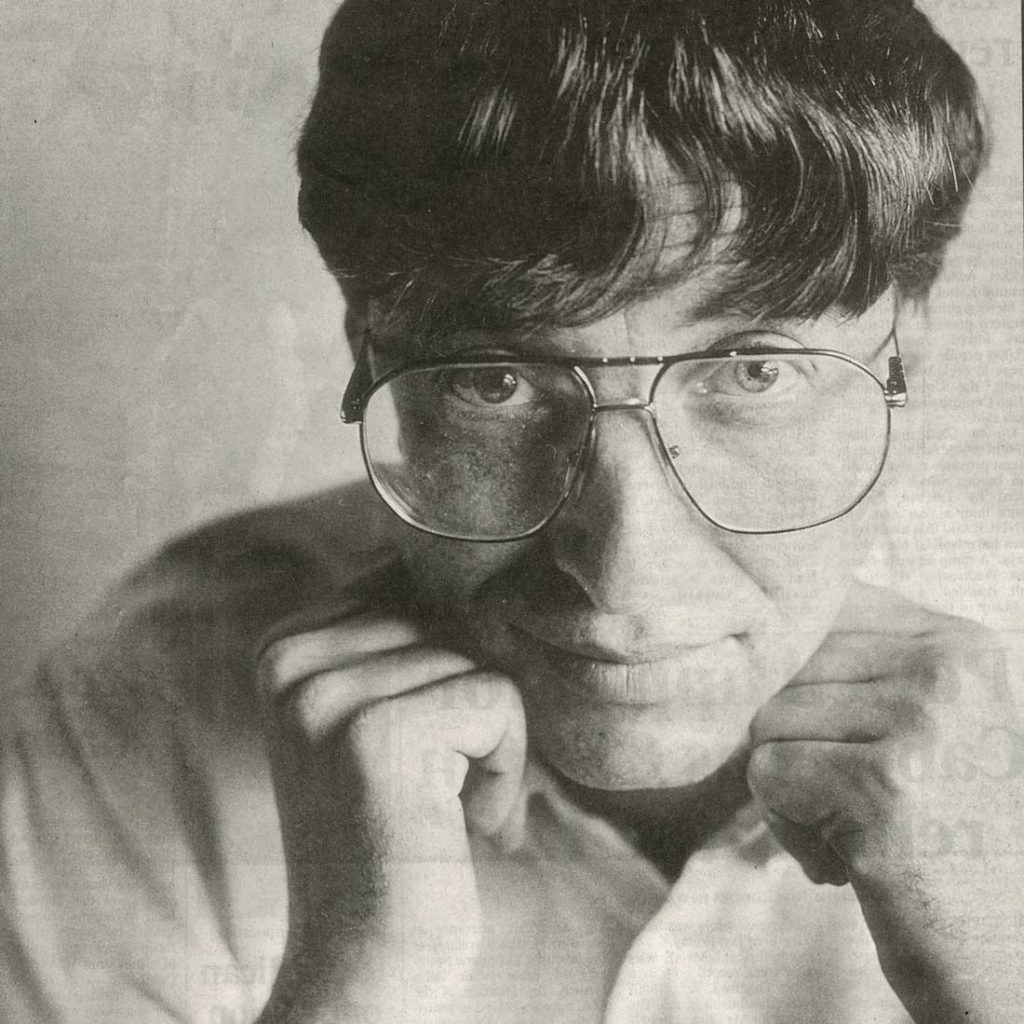 Bill Gates, the elusive chairman of Microsoft, tries hard not to reveal his inner self and personal dreams.

I had been warned by Text 100, the public relations people who look after Microsoft in Britain, not to ask Bill Gates about his wife or his personal life.What will happen if I do?

“He’ll just stand up and walk out. He’s done it before. Or he’ll become very angry, uncooperative and freeze you.” Can I ask his new baby’s name?

“We’ll get back to you with that information later if we can.”

Another Gates aide thought I ought to know that “a lot of people find Bill scary, the fact that he’s so intelligent”.

Actually Bill isn’t so intimidating. Elusive, yes. Puzzling, maybe. And certainly a personality with all the warmth of a tray of ice-cubes. But not frightening. In fact, I could swear a shadow of fear flickered across his face – cute in a boyish, freckled way – when I mentioned the word emotion.

Not that he broke down or anything. He crossed his arms, protecting his personal space, and swivelled his eyes across the room to where a Text 100 aide was waiting, as if to say: this is not a neat departure from my agenda, guys.

Imagine an extra–terrestrial’s reactions when first confronted with humanoid life and you’re close to Bill’s response if the conversation wanders off Microsoft or computers.

Of course, he’s weird. After all, the man’s a genius. Chairman and co-founder of Microsoft, he’s considered one of the century’s foremost thinkers. A frontier scout, exploring the canyons of cyberspace, blazing trails where no hacker has dared take his mouse, Bill is probably the most brilliant programmer of the age, as well as one of its most ruthlessly competitive and successful businessmen.

There’s no such word as hyperbole when you’re in the presence of the king of kings, the master of all universes, the richest American citizen, whose personal fortune is estimated at $13 billion (Pounds 8 billion). Awesome or what?

He could be, were it not for the packaging. Bill’s personal software is, well, drab. The wrinkled brown suit, worn with a striped shirt of some dubious synthetic material, and a hairstyle only seen on Mormon missionaries in the Seventies, is somehow distracting. It diminishes the aura of greatness, activating the nerd label he has never managed to delete.

Who is sending him out like this? I mean, he’s been married for three years to Melinda French, an extremely attractive Microsoft computer products manager. And here he is, stretching, yawning, scratching and looking more crumpled than a railway ticket inspector at the end of a shift. As the yawning subsides he explains that he flew in from Seattle the previous day. So you’re jet-lagged?

“A little tired, I like to have six hours sleep since my reflexes work better that way,” he answers in a high-pitched monotone, not unlike one of those electronic recordings that interrupts when you’ve dialled the wrong number.

We’re in the Science Museum in South Kensington, where he has been conducting a question and answer session with school-children. Bill gave the attentive computer students an outline of a world ten years hence. He described how voice-activated computers would render all other hardware obsolete. We should greet machines as the great liberators, he said, freeing us from mediocre tasks to pursue a life of leisure. With the audience, he appeared comfortable, likeable, mischief flitting across a face too impish for 41 years. A great deal more comfortable, I might add, than he was in the 45 minutes he spent with me.

Perhaps leading off with a question about the nerd label was unwise. “I dunno. I dunno why so much attention is paid to me. There are hundreds of smart people in my business, the people who work for me, my competitors. There are many in my field leading comparatively anonymous lives. But I’ve chosen to be head of Microsoft, so I accept debate is healthy, scepticism reasonable.”

Often, after a question he would stare back at a point beyond my left shoulder, with a look of bewilderment and irritation, as though I was addressing him in Serbo-Croat and he was waiting for the translator to begin.

Asking him to describe feelings such as happiness, or his sense of fulfilment at such epoch-making achievements, was especially tricky.

“I’m very lucky. I get to work with smart people who are creating important products. I’ve got the most fun job around. Yes, I have reclusive qualities, you could lock me in a room with 20 books and I’d be very happy. Then I’d be equally comfortable locked in a room with a group of people and a pack of cards. A couple of years playing bridge would be neat, too.”

Neat, fun, smart, cool, and hard-core (Microsoft jargon for long hours) form a substantial part of Bill’s vocabulary. “I’m fairly optimistic, though perhaps I worry a little more now, now that I have a daughter. Is she well? Is she safe?”

A chink in the personal security fence appeared. Seizing the moment, I asked if fatherhood had altered his attitude and his work habits. “I always knew I was going to have kids – and there’s certainly a magic element to it – but I don’t think it’s altered my views of the world.

“I don’t sit up all night like I did when I was 21. I like to go home to sleep. But I still do hard-core because it’s what I enjoy doing. I’m pushing forward the whole time, not out of a sense of restlessness or frustration, but because my aim has not changed. And that is to make computers available for everyone.”

The $50 million futuristic building he plans to move into next summer stands on 415 feet of Lake Washington shore: 80 per cent of the house is underground.

One of Bill’s favourite novels is The Great Gatsby. I suggested that perhaps he does have a romantic heart, since Fitzgerald’s hero lived in a mansion where lawns lead to a waterfront. The comparison seemed to annoy him.

“Gatsby had a deck to walk on from where he was able to see the light from Daisy’s house. Gatsby collected things. He represented opportunity. You can do or have anything. An American view Fitzgerald found naive.” A smug cackle and a wave of his hand signalled that the topic was closed.

If it is within his communicating skills to illuminate the inner man and allow an understanding of his personal passions or hopes, it’s clear he has chosen not to. It’s tempting to imagine that Bill has been assembled from a box of optic wires and microchips.

Glimpses of a clever, energetic child with leadership qualities who became fascinated by computers when he was one are all he wants to share.

Money is not what detonates his ambition. Results, moving forward, being with smart people. Firing an employee would upset him, he admits. “Though I rarely have to do that since people I hire have to be pretty smart to start off with. I surround myself with people who argue with me. That’s what they’re paid to do. I’m far from being the hierarchical chief, surrounded by yes men.”

Microsoft and his fortune will not be inherited by his children. “I believe that to be a dangerous practice. They’ll have enough to be comfortable with. The rest I plan on donating to charities.”

Speculating that he must have been a model child, one who rarely rebelled, who gave drugs, drinks, wild parties a wide berth, I almost missed the whispered response.

You did or didn’t?

“I did. I said I did all those things. I was deeply rebellious which is why my parents sent me to a private school. To sort me out. I’m glad they did, those guys certainly whipped me into shape.”

His eyes swivelled again towards the woman in the corner. “You have five more minutes,” she announced.

Later that evening Text 100 called. They had been permitted to reveal his daughter’s name: Jennifer Catherine. I told them I was grateful. They understood. 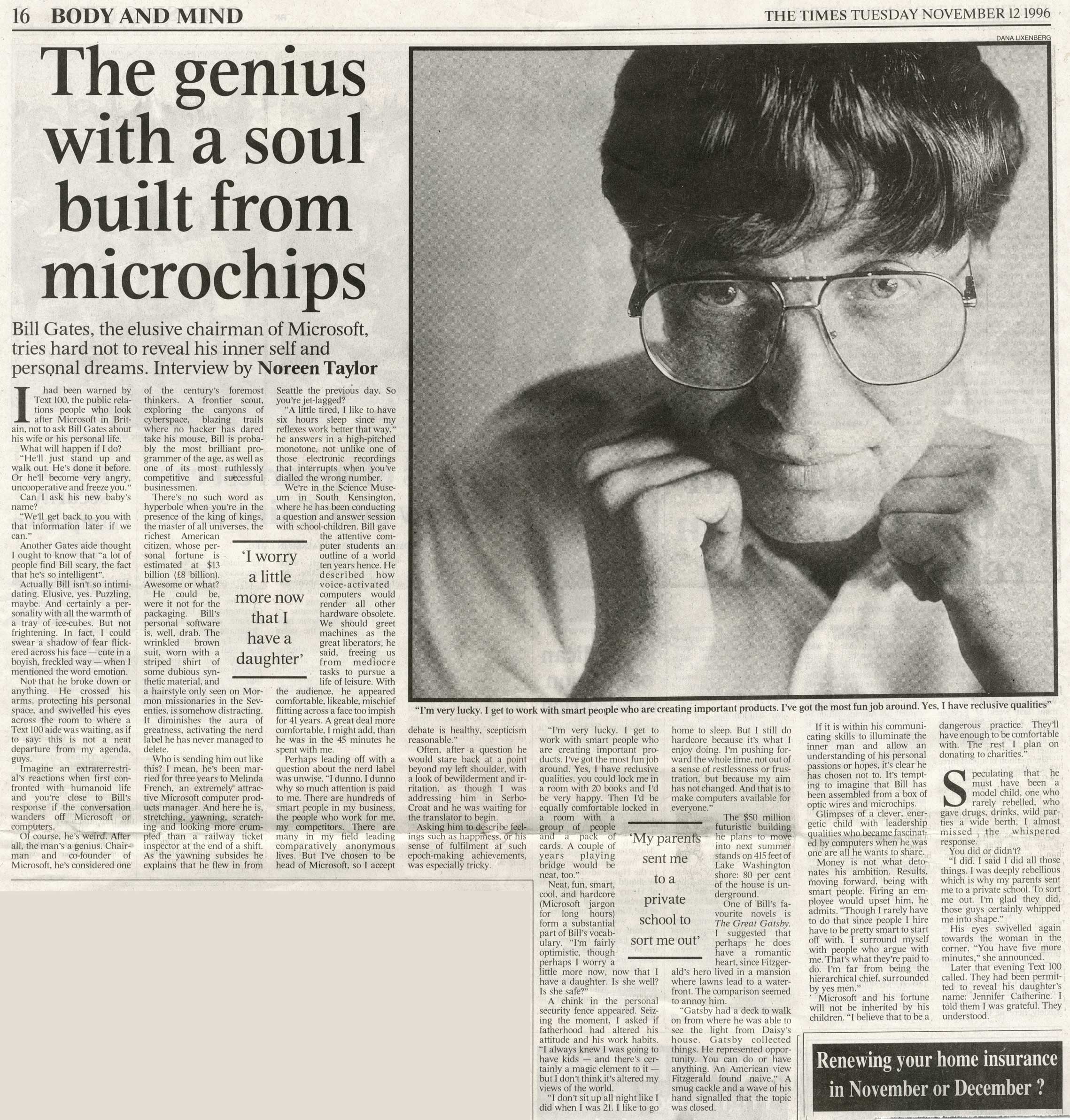