The making of Mandy Smith

Mandy Smith has squeezed more sexual drama into her sixteen years than most women manage in a lifetime. When she was thirteen Rolling Stone Bill Wyman swept her out of her mother’s council flat into a world of private planes, country mansions and bottomless credit cards.

Men do not merely fall for Mandy Smith, they become obsessive, grow reckless in their desire to possess the blonde child/woman with knowing eyes and jail bait body. Maurice Boland was one of those men. A 38-year-old Mandy victim who should have known better. But Maurice didn’t stand a chance.

He met Mandy two years ago in Cuba, a Marbella nightclub where he worked as manager. Maurice was, and is, happily married with three sons. The golden child he met that night had already grown bored with Wyman and was in the midst of a passionate affair with Maurice’s young cousin, Keith Daley.

When the Mandy-Wyman story became a juicy, international scandal, Maurice told Mandy he could rescue her from those sleazy headlines and make her a star. Maurice persuaded his attractive wife, Wendy, that managing Mandy could launch him into the big-time. So, for nine months Maurice lived out his favourite fantasy – the showbiz manager caught in the flashlights with the beautiful girl by his side.

But the beautiful girl became weary of her manager’s growing possessiveness. His almost neurotic watch over her every move drove her to scream at him: “Get out of my brain, Maurice, I can’t breathe when you’re around.” Maurice is now out and emotionally down.

On the morning Mandy Smith saw herself headlined “Rock Star’s Child Lover, aged 13”, she knew that she, too, wanted to be a star. And the flash-looking Irishman sitting across from her in the Marbella hotel room knew that his prayers had been answered.

As Mandy raced around the room reading and giggling over the lurid, headlines, Maurice Boland’s eyes never left her. Maurice’s brain was in overdrive. He had run a series of nightclubs in Dublin and Marbella, but he had always known he was destined for greater things.

All his life he had been desperate for fame, and now if he was clever and could exploit the assets of this 16–year-old beauty, Maurice would be known as The Man Who Made Mandy. Nine months later, Maurice is back where his dream began – back in Marbella living with his wife and three sons, earning a living arranging beach concerts.

Mandy Dumps Maurice is the latest headline in this saga and Maurice is no longer calling Mandy “My Baby Star.” The word “dumped” brings Maurice out in a sweat of shame. “I was in bits when I stepped off the plane here three weeks ago. I felt dirtied, humiliated. To be treated like that after everything I’d done for that girl.

“I sat with her at night till she fell asleep. I watched what she ate. I chose her clothes. I was doing for Mandy what Brian Epstein had done for the Beatles. Don’t ask me if I knocked her off.  I’m a happily married man and that question puts me in a difficult position. Draw your own conclusions.”

Maurice is 38. He wears a gold chain round his neck, his hair is badly

streaked and he describes himself as a poser. Like all posers, Maurice is frantically worried about his image and that is why he wants to take us right back to the first night he met the rock ‘n roll Lolita and dazzled her with some highly original chat.

“I saw her in my club. She was beautiful, special. Golden hair, golden skin. I didn’t know at the time she was only 14, so I went up to her and said, ‘Who are you? Who are you with? You should be a model!’

“She told me she was waiting for Keith Daley, my cousin who I’d hired to distribute publicity leaflets on the beach. The Mandy I later developed was already there. The little mini-skirt, the tousled hair. I could see the hair as a marketing product.  You know… hair bands for fans who would become Mandy lookalikes.

“I kept saying to her, ‘you must let me do something with you.’ She just giggled. I was always asking Keith about her. He used to drive me mad saying… if only you knew her age! Then one of the barmen told me she was Bill Wyman’s girlfriend. Amazed isn’t the word. There I was offering to show her the world, and she had already seen it with one of my idols.”

Mandy disappeared at the end of the ‘85 season and returned the following year with Keith. Maurice was told she had walked out on

Wyman. “Mandy and Keith used to hang around our house and I suggested to Mandy that she could make a lot of money if she sold her story to the Press. But she didn’t want to get Bill or her mother into trouble.

“When the story did get into the papers my life changed overnight.

I now became Mandy’s protector. When Mandy and Keith went into hiding I was the one answering the phone, advising her, keeping hundreds of photographers parked outside my house happy.”

Maurice loved the attention. He wanted it to last forever, and that meant using Mandy. However, there were two obstacles blocking Maurice’s path to fame: Mandy’s mother, Patsy Smith, and the Stones organisation.

“I called a meeting at my house. I was brilliant. I won Mandy’s mother by telling her Mandy could be a star in her own right.

The Stones’ representative wanted Mandy to lie low for 12 months, so I said in that case will you pay her all the money she’d have made in that time?

“When the Stones refused, Patsy agreed that I could promote Mandy for 20 per cent of what she made and after one year Patsy would sign a contract. She didn’t trust me yet. After that meeting, Patsy told me she was dating Bill’s son, Steve. I wasn’t interested in Patsy’s life. I was besotted, fascinated and infatuated with Mandy.

“My first plan was to steer Mandy away from the Wyman sensation.

I wouldn’t allow her to talk about him. I was going to turn her into a top model. After that, there would be a record deal and finally when I’d launched my product around Europe, I was going to break America, going to get her a film contract.”

Maurice came to London with Mandy and with the blessing of his wife Wendy. “I love Wendy and I loved Mandy. Wendy and Keith were being shoved into the background because I wanted to be with Mandy the whole time. This was the Mandy and Maurice Show.

“Keith was tagging along behind us like a housewife and beginning to irritate Mandy. He’d wear dark glasses and tell people they couldn’t get into lifts – didn’t they know Mandy Smith was in there.”

After two weeks Maurice had made £9,500 for Mandy in modelling fees. “We moved only in limousines. It was freebies all the way. I’d walk into top boutiques, pick clothes off the rail and tell the owners that if they were lucky Mandy Smith might wear this. I’d instruct Mandy – don’t walk, crash into rooms like a star because that’s what you do.”

Mandy fired and rehired him twice in the first week. Her moods would eventually goad him into tearing out clumps of his streaked hair. Mostly, though, Mandy did as she was told, especially after clever Maurice won her a recording contract.

“Just think,” said Mandy to Maurice one night as they were gliding along in a limousine listening to her record, “We’ve done all this without Bill Wyman. Let’s go to the Hippodrome and celebrate.”

“I was very excited and proud dancing with her that night. The floor cleared, the cameras flashed, and the next day I was in the papers as ‘Mandy’s new boyfriend.’” Maurice swears that Wendy did not utter one mean word when he telephoned her in Marbella the next day.

“I wish you could have seen me then,” sighs Maurice into his orangeade. “Total control over the record, television cameras following us, international magazines, not asking but begging for sessions, and me in my Katherine Hamnett suit shouting, ‘no comment… no pictures now… she’ll sign that later.’

“I was living out my fantasy in the best hotels, first class seats… and Mandy was along for the ride as well.” 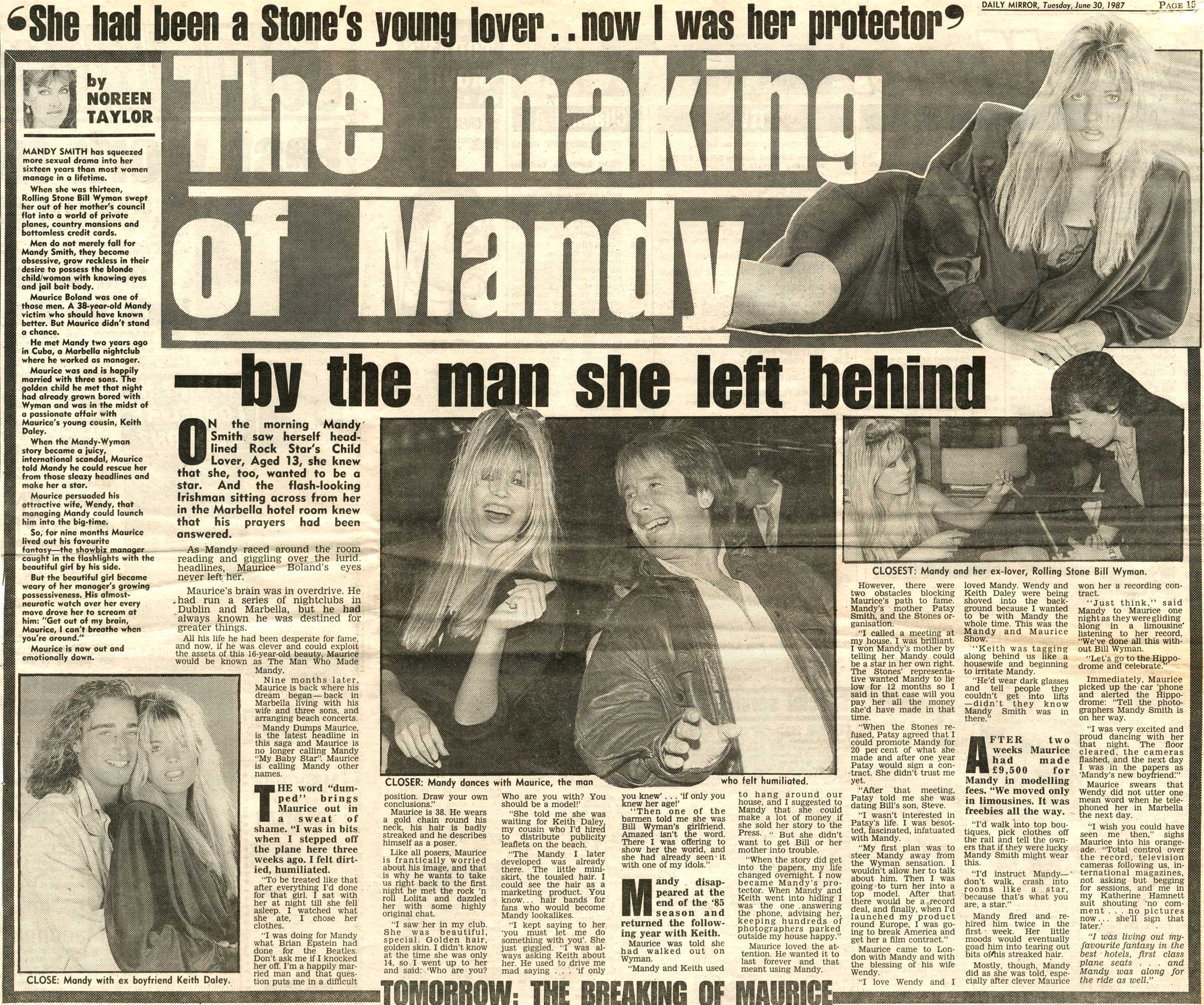