The return of Superwoman — Shirley Conran 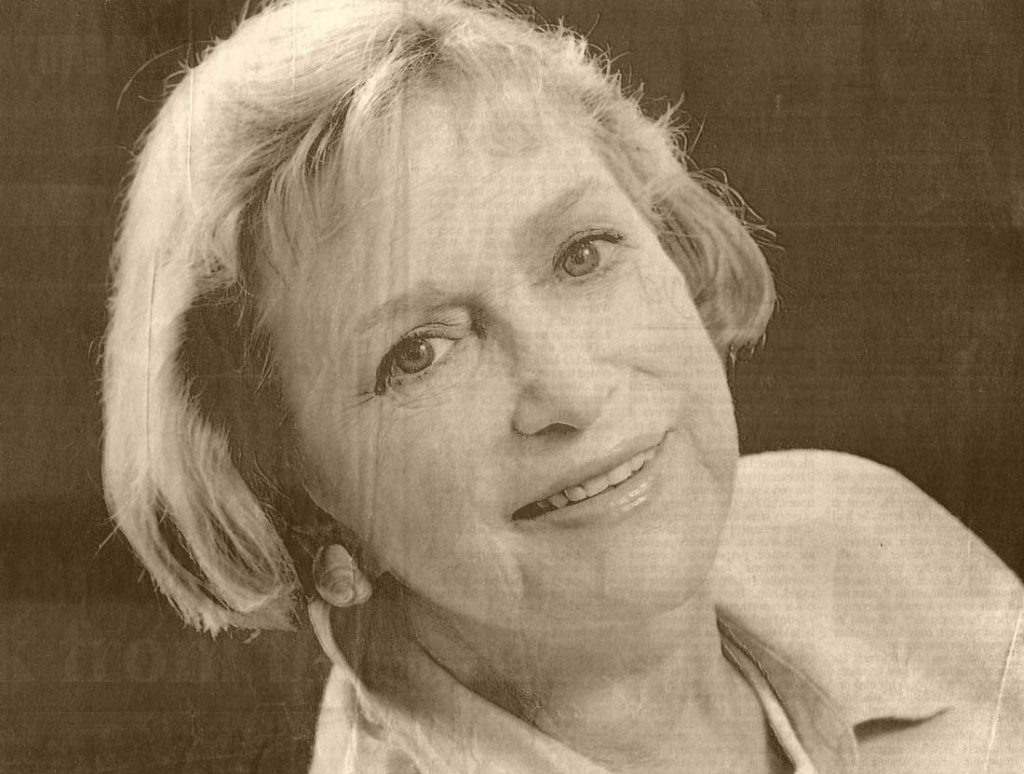 Shirley Conran, the author of a string of a blockbuster novels and creator of the Superwoman phenomenon, is writing yet another chapter in a life so full there seems little room left for more plot.

It is definitely not, however, an epilogue entitled retirement. “Tried that once,” she recalls with a shudder. “At the end of three weeks I was tearing my hair out.”

As Shirley’s bestsellers suggest, it is best not to reveal too much too soon. So let’s begin with a description of the lead character: a well-preserved 66-year-old, vibrant, pretty and superbly groomed. Shirley is proof that high maintenance care gives results. And results are what interest her. “I’ve never been one for parties or lunches. I prefer projects, the doing of things.”

The chapter on Shirley’s new project opens with her return to London from self-imposed exile in Monte Carlo. She moved to a large mansion flat in Putney, recently renovated and decorated as a cream and black tribute to Cole Porter’s Thirties apartment in Manhattan.

Why? “I came back for a number of reasons. Principally because, when one of my three grandsons died, I realised that life was no longer something you could put in the pending tray. Family and friends were always my priorities. Now I want to be around in order to be useful to the people who helped me.”

When Shirley arrived in England last October, she says she became conscious of a new man-made problem afflicting women, and now we get to the meat of the story.

“I realised that working mothers were in a far more anxious state than when I left in the Eighties. I could see young girls in offices watching the stressed-out lives of career mothers trying to cope, and deciding to forgo children rather than live with the strain.

“The harassing of the young single mother, who has a baby because she wants someone of her own to love, doesn’t make sense. Since they might make first-class mothers what is the point in fobbing them off with second-class jobs and forcing them to leave their babies with third-rate child carers?”

Shirley warms to her theme: “I believe that if a man cannot support one family he should be banned from having another. Men have got to be made to understand the world is changing, that more than one in five women earns more than her partner, and that housework is really house-management by families.

“Men have become so clever at avoiding whatever they deem unexciting. I understand how they feel about cleaning and not wanting to spend Saturday mornings in supermarkets. Like many women, I hate it, too. But they have to take responsibility. It is also time to review the attitude to absconding fathers.”

Many women may have had similar thoughts, but the difference with Shirley is that she didn’t stop with the thinking. How, though, could she channel growing discontent into sensible rebellion?

“One of my god-daughters complained that she was sick of men who called breakfast meetings. ‘Don’t they realise,’ she said, ‘that that’s one of the busiest times of the day for working mothers. Maybe I should hold a little meeting about it.’

“I said, ‘Hold a meeting certainly but make it a big one. In fact, make it in the Savoy Hotel where the men go and I’ll hire it for you.’” The result? Mothers in Management, a major league conference designed to examine, and resolve, the problems faced by working mothers.

It will be chaired by Shirley on September 30 and is backed by a list of patrons culled from the great and good such as Baroness Helena Kennedy of The Shaws, Sian Phillips, Baroness Brigstocke, Mary Quant, Lord Puttnam, Lord Alderdice, Richard E. Grant and Professor Nigel Coates. Among the guest speakers will be Glenys Kinnock, Susie Orbach and Professor Cary Cooper.

“The conference has taken over my life,” says Shirley. “I have had to cancel weekends.” Now comes the final twist. So enthusiastic is she about this new project that she has decided that her latest potboiler will be her last.

“Don’t mind the writing,” her voice a throwback to Fifties theatre. “It’s the business that gets in the way; the damned promotional tours, the literary lunches, which are just great wank sessions as far as I’m concerned, plus the rounds of television studios, the interviews, and the time spent on the phone hassling with 26 different international publishers.”

So the Conran aficionados who enjoyed Lace, Savages andTigerEyes will have to savour The Revenge. (For working mothers who haven’t the time to spare, it involves an Edwardian waif who survives sexual abuse to become a theatre star only to be hideously scarred in a theatre fire which ruins her ability to enjoy sex…)

If it does as well as the others it will earn her a fortune. Garlanded with laurels accrued from a lifetime slog, she could obviously afford to relax. She has fame, money, houses and wardrobes of designer clothes. And yet it is clear that these prizes have not satisfied her appetite. The drive to achieve more, to launch herself as one of society’s front-line players, is too deeply embedded for Superwoman ever to relax.

Of her three ex-husbands, she acknowledges only one, whose name she has kept: the designer and restaurateur Sir Terence. Her two sons are the designers, Sebastian and Jasper. She has three homes, including an 11thcentury French castle.

Her path has been far from easy, having spent long periods grounded by ill health. She has suffered skin cancer, chest infections and, most damaging of all, the mystery virus myalgic encephalomyelitis, or ME, (also known as chronic fatigue syndrome). “I’ve learnt how to pace myself now. Before, during promotional tours, I used to keep falling down in hotels and breaking my toes. Then I learnt how to reset my own toes so I didn’t have to waste time going to hospitals.”

This feisty approach was just as crucial after her acrimonious split with Sir Terence. Was it a case of getting even rather than getting mad? “You mean revenge? Absolutely not. Don’t believe in it. Never entered my head. Hunger was the great spur.

“After Terence and I separated I had no money. I never asked Terence for any alimony so I floundered for months because I had no savings. Our two young sons stayed with my mother and I slept on my sister’s dining- room floor on the understanding I remained out of the house during the day. Meanwhile Terence was driving around London in an Alfa Romeo.”

She says he had to be taken to court five times because he was not paying her enough to support their children. “I must not be critical though, for my sons’ sake – they don’t like me talking of their childhood.”

As to why she left in such parlous straits, she just shrugs and smiles: “Thankfully, Caroline didn’t let him get off so easily. I was so pleased for her.” Sir Terence’s last ex-wife left the divorce court with millions, despite his ungallant plea that she’d only cooked a few dinners. “Amazing what he gets away with,” laughs Shirley, “and yet he still attracts the nicest women, like his present girl-friend.”

Shirley once said that marriage turned her into a door-mat. Has anyone changed her mind? “l was brought up thinking you were a failure if you didn’t have a man by your side, but quite honestly I don’t know that I could take on a man. My life is too packed.

“The watershed in my life was getting ME when I was 40. It was then I decided that I was going to have a career instead of short-term jobs to pay bills. My background was one of working-class mother, professional father, where money was never a problem. Like most of my class and generation I’d been brought up believing that there were two ambitions for women: getting married and having children.”

That she has accomplished so much more is due to the conditioning she received from St Paul’s Girls’ School in London where she was taught by a series of women she describes as brilliant, dedicated blue stockings who’d lost their fiancés in the war.

After being finished off in Switzerland she trained as a sculptor and painter before working in textile design until she was 30. When she discovered journalism she went on to became the first women’s editor of The Observermagazine, and then women’s editor of the Daily Mail.

“I had the most fun of my life in newspaper offices. That’s why I knew the medical profession were talking rubbish about ME when they diagnosed the disease as an emotional escape route from work by the mind feigning illness. I didn’t talk about it at the time, I just dealt with it.

“Now I know my limits, an hour’s sleep midday, no wine, no skiing, in fact no exertions whatsoever. I can cope. Please don’t make me out to be a workaholic. I am not. Workaholics work to avoid life. I work to be engaged in life.” 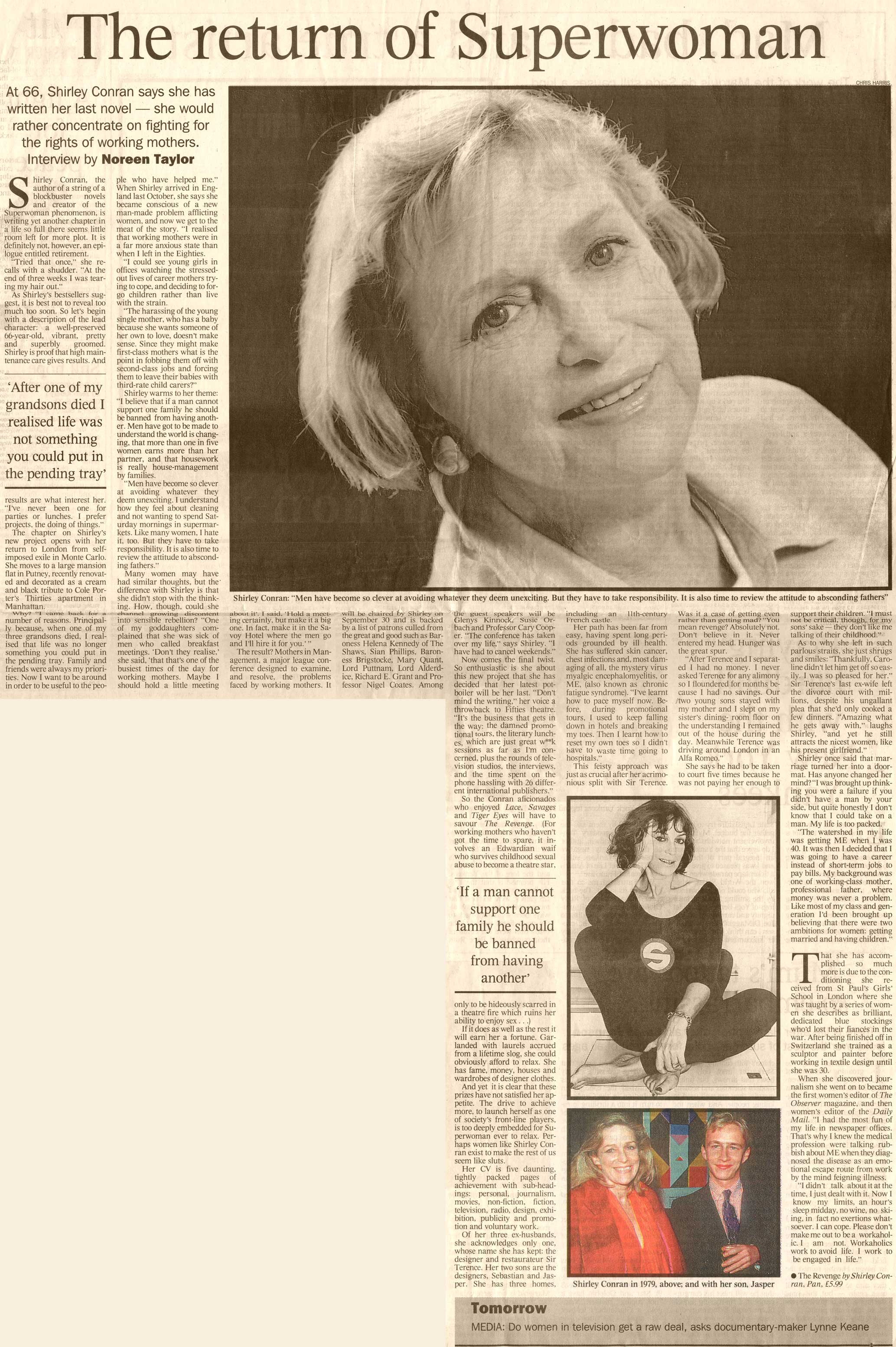