The sinking of the Marchioness pleasure cruiser

Observing the aftermath of the sinking of the Marchioness pleasure cruiser in the Thames on 20 August 1989 in which 51 people died. | The Daily Mirror 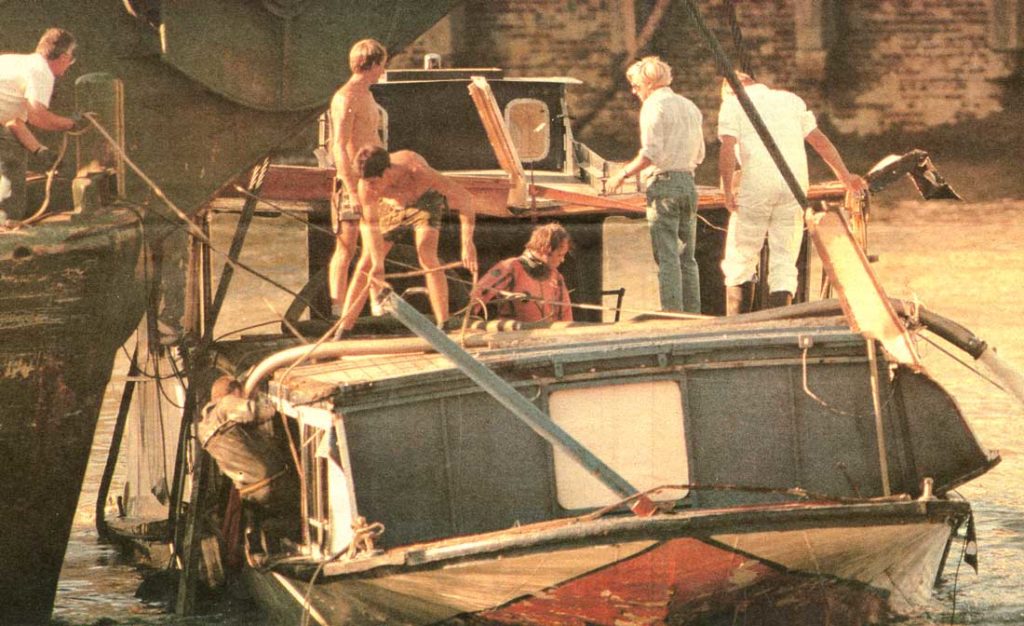 It took two minutes for the Marchioness to sink and 15 hours’ waiting before she rose to the surface again. The pleasure cruiser that had echoed with laughter and fun rose unsteadily from the black, murky Thames, dripping mud, a gashed, jagged tomb, a coffin ship.

As she came up, you could see the red, white and blue bottom deck – the top deck was sheared off during the impact with the dredger, Bowbelle. From her sides, water was being pumped out through shattered windows. Police in yellow oilskin suits stood on the deck. From time to time they went below to bring out another body.

The bodies were handed over to other policemen in white protective clothing who placed them in body bags and lowered them on to waiting police launches to be taken up river to Westminster mortuary.

It was curiously silent with policemen standing anxiously, waiting for all the missing bodies to be accounted for so waiting relatives could identify and mourn their dead. Since early morning thousands of people had lined Southwark Bridge watching rescue workers and salvage barges circle the spot where the Marchioness sank at 1.50am.

Women and men in evening dress had been bopping on the dance floor. Others were sitting at dining tables. Bar staff were busy with trays of drinks. Then the smiles froze as they heard the bang that sent them lurching downwards towards to the bottom of the Thames.

Those who escaped could be seen swimming, their faces white in the moonlight, screaming: “Help me, help me.” The lucky ones were picked up quickly by a second pleasure steamer. Those who made it to the shore stood, looking back in anguish, knowing that wives, husbands and friends were still trapped.

Annette Russell, a model agent, said: “I dived off with four others. Luckily we were strong swimmers and we made it to the shore.” Rob Elliott, a DJ with the second steamer, said people swam alongside shouting for help.

Gerry Ray, 43, landlord of the Founders Arms, a pub close to Southwark Bridge, where the tragedy took place, said: “All I could see over the bridge were these bodies bobbing up and down, crying

for help.” He added: “There was nothing we could do. We were completely powerless. I can’t tell you how frustrating that feeling was. We couldn’t make out whether they were swimming or drowning.”

Within ten minutes, Thames was ablaze with spotlights and blue police lights. Helicopters roared above and debris floated below. So that cries of help could be heard, the police stilled their sirens and people stood shocked, not daring to speak. By early morning, desperate relatives were arriving at Cannon Row police station, opposite the pier where the Marchioness began her last voyage. Many had heard of the tragedy on the early morning news, then realised sons or daughters had not returned home.

Some faces were stiff with grief. A sobbing mother was supported by relatives. A beautiful teenager with a cut under one eye was helped from the police station. She had been to the party with her new boyfriend. Now he was missing. There was little the police could do. They had no information, just plastic bags holding blouses, shoes, watches and handbags.

Throughout the day, police launches with divers on board searched for bodies. Mrs Thatcher arrived aboard a police launch. She could be seen pointing down to where the Marchioness lay. Transport Minister Michael Portillo also visited the scene and pledged immediate Government action if investigators uncovered safety faults.

Shortly afterwards, the men in white suits appeared with body bags for the dead. The night of summer fun was well and truly over.