Tony Blair, did you ever inhale? 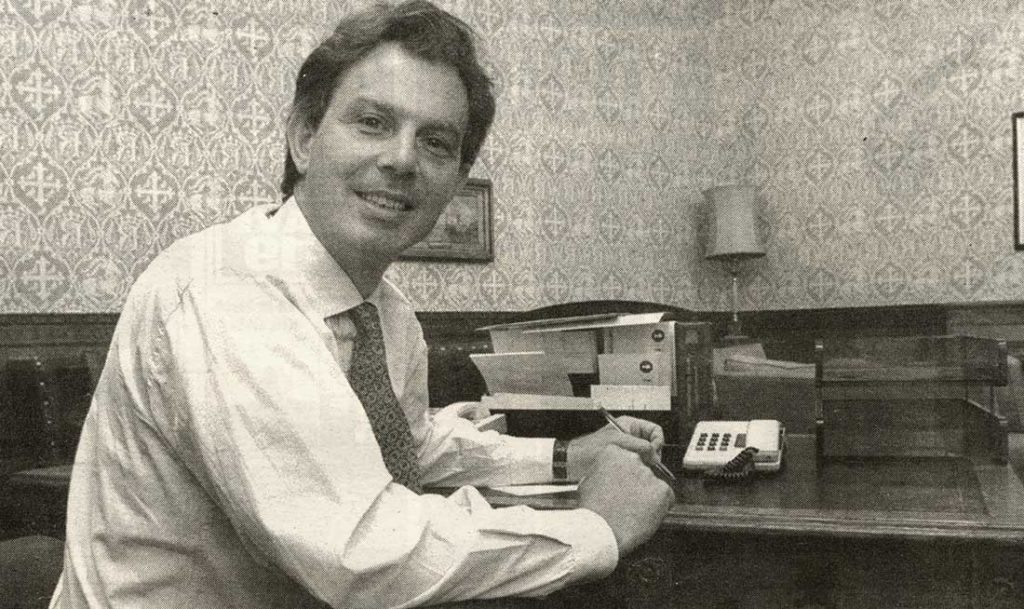 There is the unmistakable buzz that heralds optimism, confidence and a hard sense of purpose surrounding Tony Blair. The setting – his large, dignified, wood-panelled, Westminster  office – is part of it.

Then there is Anthony Charles Lynton Blair, the man himself. It might be considered trite to go on about his looks but few women would remain unimpressed by the tanned smiling face and the slim hard frame underneath the white shirt and dark trousers.

Such male attributes are a rare enough sight in parliamentary lobbies crowded with flabby bodies and blotched complexions. But there has to be something else. And the few who know him paint a more complex picture than the Golden Boy portrait.

His friends insist he is much harder and grittier than he first appears.

“Forget all that Bambi rubbish,” said one. “Push him when you meet him. Say, ‘Hey, you must have been a bit of a bastard to have sewn up the leadership that quickly.’”

Another insisted he had a ruthless streak: “Ask, ‘How come Gordon Brown got pushed aside so quickly after John Smith’s death?’ After all, politics was Brown’s life. Bair’s got a family and there is a lot more going on in his world apart from politics.”

The man who is the central focus of all current Westminster gossip comes out from behind his desk in order to sit on one of the easy chairs in the corner of the office. The first question is supposed to be a fun one. A little laugh to break the ice: “Has he ever smoked dope?”

He crosses his arms defensively and looks unamused. “No, I haven’t.”

Then he smiles. “But if I had you can be sure I would have inhaled.”

A far cooler response than President Clinton, whose reply to the same

question was: “Yes but I never inhaled.”

like the friend replied: “Tony is an uncomplicated man who is about to lead a very complicated life. I don’t think he or his wife Cherie realise what they’ve let they’ve let themselves in for and how it’s to affect their privacy, their time with their three young children.”

Does he realise what he has let himself in for? Does he wake up in the morning in a state of dread, thinking… Help, I’m leader of the Labour Party and I’m expected to lead them to victory in the next election?

“I’d be inhuman if I told you I don’t,” he says. “I feel a great sense of responsibility if that’s what you mean. A lot of hopes have been invested in my ability to lead the Labour Party. I understand how ruthless and unprincipled the Tory Party is when it comes to clinging to power.”

Like his wife, Blair is a religious person and when he speaks of his political belief the word he most often uses is “vocation”

“I’m not interested in politics for the sake of it he says. What moves and excites me is having the means to create a more just society, a society that is compatible with Christian beliefs.

“I’d like to be able to see old people sitting outside on a summer’s   evening on a council estate without being pestered. I would like to be able to walk into a classroom anywhere in the country and see healthy, happy, attentive children receiving a first-rate education.

“It is a scandal how some children are being brought up. The other night I had to go back to my children’s school to fetch something they’d left behind.

“It was about 8pm and there was this kid from the school out in the street alone kicking a ball around. He was the child of a single mother who had to work and couldn’t afford child care. The Tories don’t give damn about these kids, but we do. Yet we cannot do anything until we are empowered to do so.

“I am determined we will be. I don’t see myself as ruthless, but I am Angry – you have to be in order to put forward policies that will change that situation. That’s why I joined the Labour Party.”

He joined in 1975, and entered Parliament as the member for Sedgefield in 1983. From the beginning, the compliments flowed. Labour’s Golden Boy. The Dazzling New Hope. That rare breed: a Labour MP who not only understands money but enjoys talking about it.

You get the feeling he is used to flattery and wears it well since he has never had to search for it. Success and ambition formed two of the main building blocks that have shaped his character.

His father, Leo, the adopted son of a working-class Glasgow family came out of the army after the war, took two degrees and moved to Durham where he practised as an industrial lawyer.

A life-long Tory, Leo Blair was unable to bequeath his politics to his son. However, he was able to provide him with a superb upper middle-class education.

From Durham Choristers School, Tony joined Fettes College, perhaps Scotland’s most prestigious public school, before going on to read law at Oxford. It was in the law firm he joined afterwards that he met Cherie, one of the daughters of actor Tony Booth.

And if you ask Blair what his passions are, he’ll reply: “My family, music, books. Cherie is the one who reads all the new writers. I’m inclined towards more traditional tastes, such as Dickens.”

He keeps stressing the normality of his life, insisting he is not locked within the hermetically sealed world that is the House of Commons.

“My life is a very normal one,” he says. “I help at home looking after our children. I’ve done the middle of night nappy changes, I don’t see anything new mannish about that. My wife works, so why should all the family obligations fall on her? Anyway, I enjoy it.

“Most people of my age group don’t see this as a conscious statement of correct living. It’s just that there is a different pattern to our lives now. Take last weekend. Cherie had to go to work and I took the children to the park. It’s normal – the way parents of kids at school behave.”

By his own admission he is a romantic. The kind of romantic who can be moved to tears? “Oh. yes,” he nods firmly. And when asked what has made him cry recently he cups his chin hands and pauses for some time before replying: “Yes, I have cried. Especially when I have seen poverty around me.” 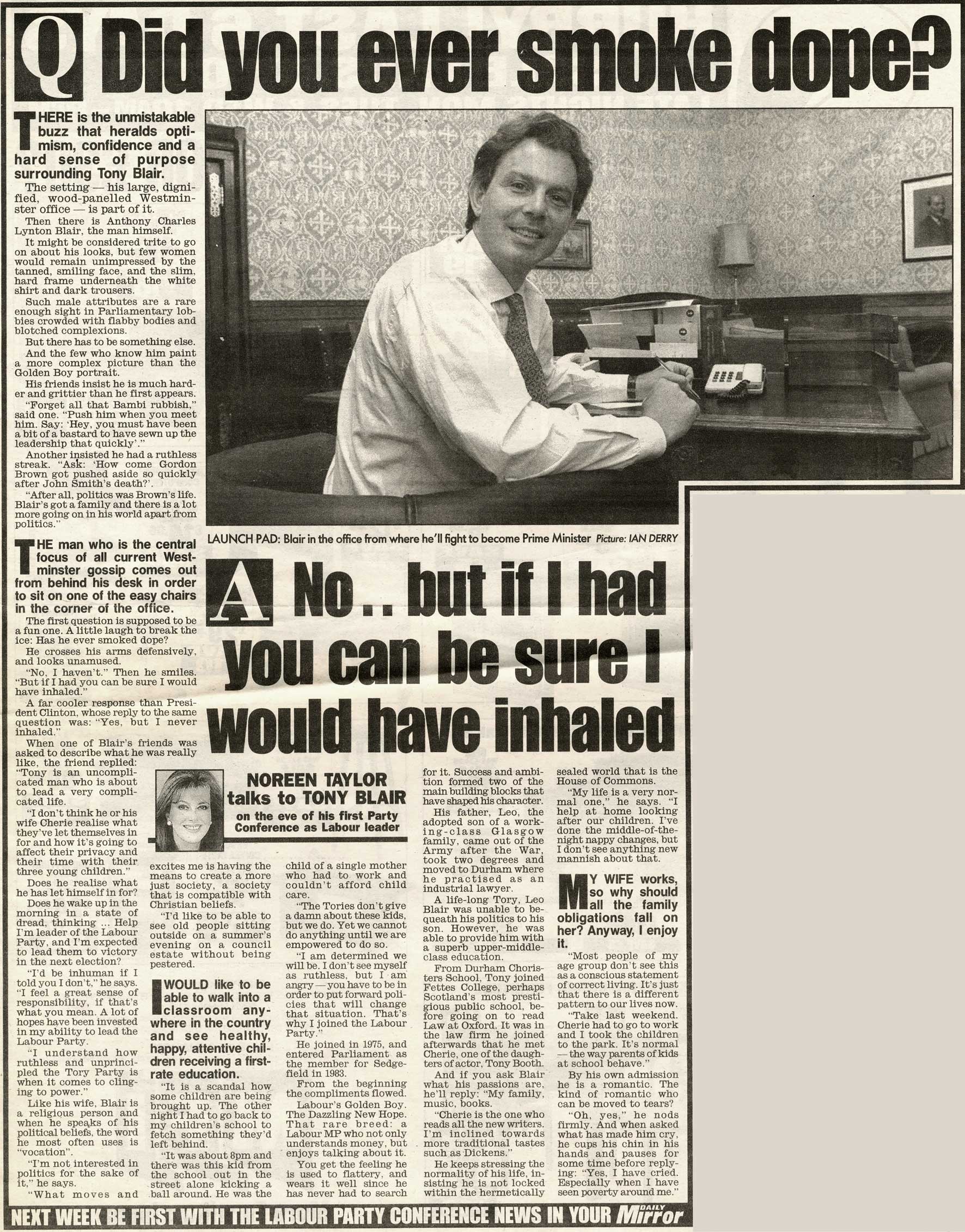