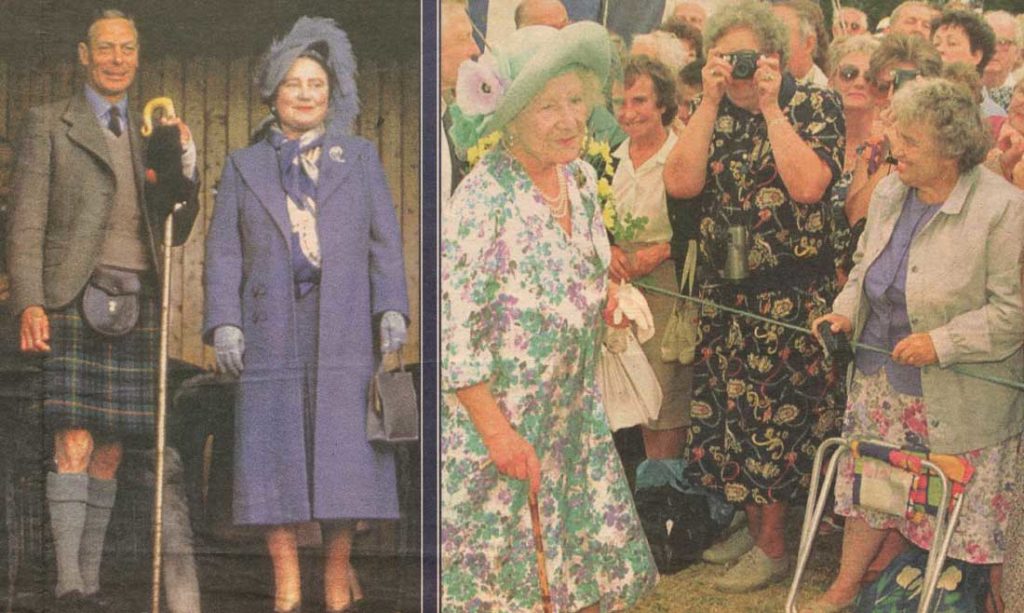 The Queen Mother, at 94, has come to terms with her great age, and is at peace with herself and the world. The official birthday photograph in this souvenir supplement was taken by her former son-in-law, Lord Snowdon, and is probably one of the most revealing royal pictures ever published. Age has no hiding place in this picture.

The lines, the slimmed down rather gaunt profile, the delicate papery skin, every mark etched by a life as long as the century, is there for us all to see. It was brave of the Queen Mother to let us look at her in this harsh, unforgiving light. In past studies she has preferred to project a look of pink and white prettiness. But in this case, she has trusted Lord Snowdon to portray her as she really is.

Snowdon says: “The picture was taken before lunch on the day my daughter, Sarah, got married. I hadn’t planned to take birthday photographs as such. But as I looked at her across the table that morning, I thought she looked so lovely and especially dazzling in that hat. I asked if I might take her photograph.

“She stood by the window and I just used natural light and an ordinary small camera. I wanted to show her in a positive light, to show that she is not only wonderful for her age, but for any age.”

Lord Snowdon’s lavish praise will be joined by greetings this morning from across the world as bouquets of flowers, cards and letters engulf Clarence House. In the months leading up to her birthday the Queen Mother has, according to those who have met her recently, started to realise she is no longer quite as impervious to the passing decades as she once believed.

Although mentally alert as to what is going on around her, and with conversational skills as sparkling as ever, there are certain notable changes. The cornflower blue eyes have lost some of their lustre, if not their impish glint, and friends have noticed her eyesight has become a problem. Sadly, she is no longer able to read comfortably.

As an avid reader who devours Dick Francis novels, books have a special place in her life. Retiring to bed early with a book of poetry and a box of chocolates was one of her treats, so her fading eyesight has cast a shadow over her usual sunny personality. 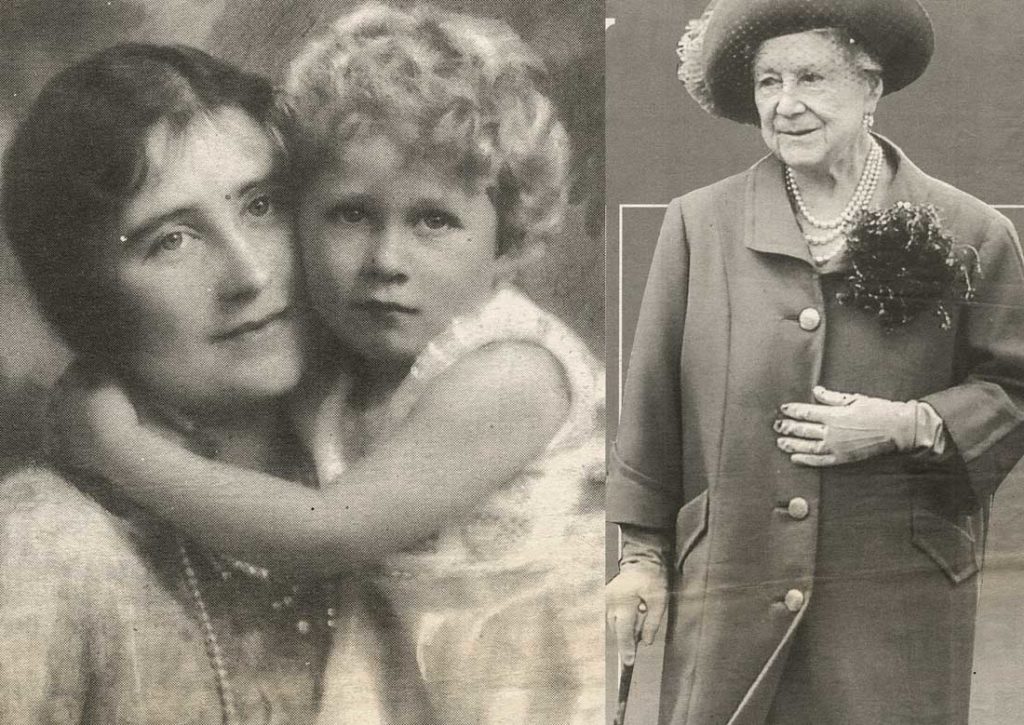 She seems smaller and is quite lame and cannot walk easily without her walking stick – an aid she was loathe to use and is now forced to. Her hatred of infirmity and old age meant that for a long time she would pretend an umbrella could support her just as well until, reluctantly, even she had to resign herself to a more robust support.

Aside from this recent weakness the Queen Mother has for most of her life enjoyed boisterous good health and reserves of stamina that must have frustrated the health food gurus.

She is an outstanding tribute to a diet that has consisted of rich, fatty foods, chocolates, cream cakes – fortified with glasses of champagne, martinis and gin. “Do you know it has no effect on me whatsoever,” she gaily remarked to an astonished guest after detailing a daily alcoholic intake that consisted of three martinis after lunch, whisky at dinner followed by champagne.

It is only recently her physical frailty has become more pronounced.

Along with her physical fragility, a vulnerable quality, something akin to sentimental sadness, has floated to the surface. A friend who met her recently says: “It’s as though she’s realised she will not go on forever, and that life comes to an end. Not that she is suffering from the glooms, just that there is a sense of ‘how much longer do I have.’”

The reasons for these introspective moods probably has to do with the deaths earlier this year of her friends, ladies-in-waiting, Patricia, Lady Hambleden, 89, and Lady Victoria Wemyss, 104. Like the Queen Mother, both shared a vigorous, no-nonsense attitude towards old age, once summed up by Lady Hambleden who said: “Ignore the advancing years or they will become troublesome and concentrate on life instead.”

For years it seemed as though the Queen Mother had defied old age and discovered eternal youth. The same straight back and jaunty step matched by that round, youthful face, with its soft glowing complexion remained relatively unchanged throughout three decades.

The realisation that, at last, old age had arrived has been met with mild annoyance. But not it appears with resignation. Last week when she attended the Sandringham flower show with Prince Charles, she was on her feet for two hours, walking around tents in blazing sunshine.

She may have looked tired, but there was never a hint that she might skip those last couple of stalls. That peculiar brand of steely determination has dominated her life and is still very much in evidence.

Racing enthusiasts at the King George VI and Queen Elizabeth Diamond Stakes at Ascot two Saturdays ago saw a similar demonstration. Leaving the royal box, the Queen Mother walked a couple of hundred yards over to the paddock. For someone of her fragile state and poor eyesight, it was a walk full of potentially dangerous obstacles.

She knew from experience that the route would take her over ground with dips and holes hidden the grass. And yet with slow, graceful determination – and watched by hundreds – she made it. The crowd watching her progress were so relieved when she arrived that they burst into a spontaneous round of applause.

Almost immediately a tannoy announcement demanded the applause to cease in case the noise frightened the horses. The Queen Mother paused, then threw her head back in a burst of delighted laughter.

Like her granddaughter-in-law, the Princess of Wales, the Queen Mother adores being the centre of attention and thrives on an appreciative audience. Unlike Princess Diana, however, she possesses a quality that has protected her from the bouts of depressions and insecurities that have haunted Diana’s life.

Aside from the bonus of being brought up within the comforting bonds of a happy stable family, the Queen Mother has the knack at never looking too closely at what might offend or disturb her.

Even close family crises are met with a sympathetic smile, a few of wisdom, and then followed by a clear but unmistakeable message that while she may be prepared to listen, she would rather not get involved.

What she concentrates on achieving is the seemingly impossible – a near permanent state of happiness. “It is as though,” explains someone who has known her for a long time, “Her Majesty has worked out that life is composed of storms and sunshine.”

So, quite simply, when the rain begins to fall, she moves out of it quickly into the area below the patch of blue sky. 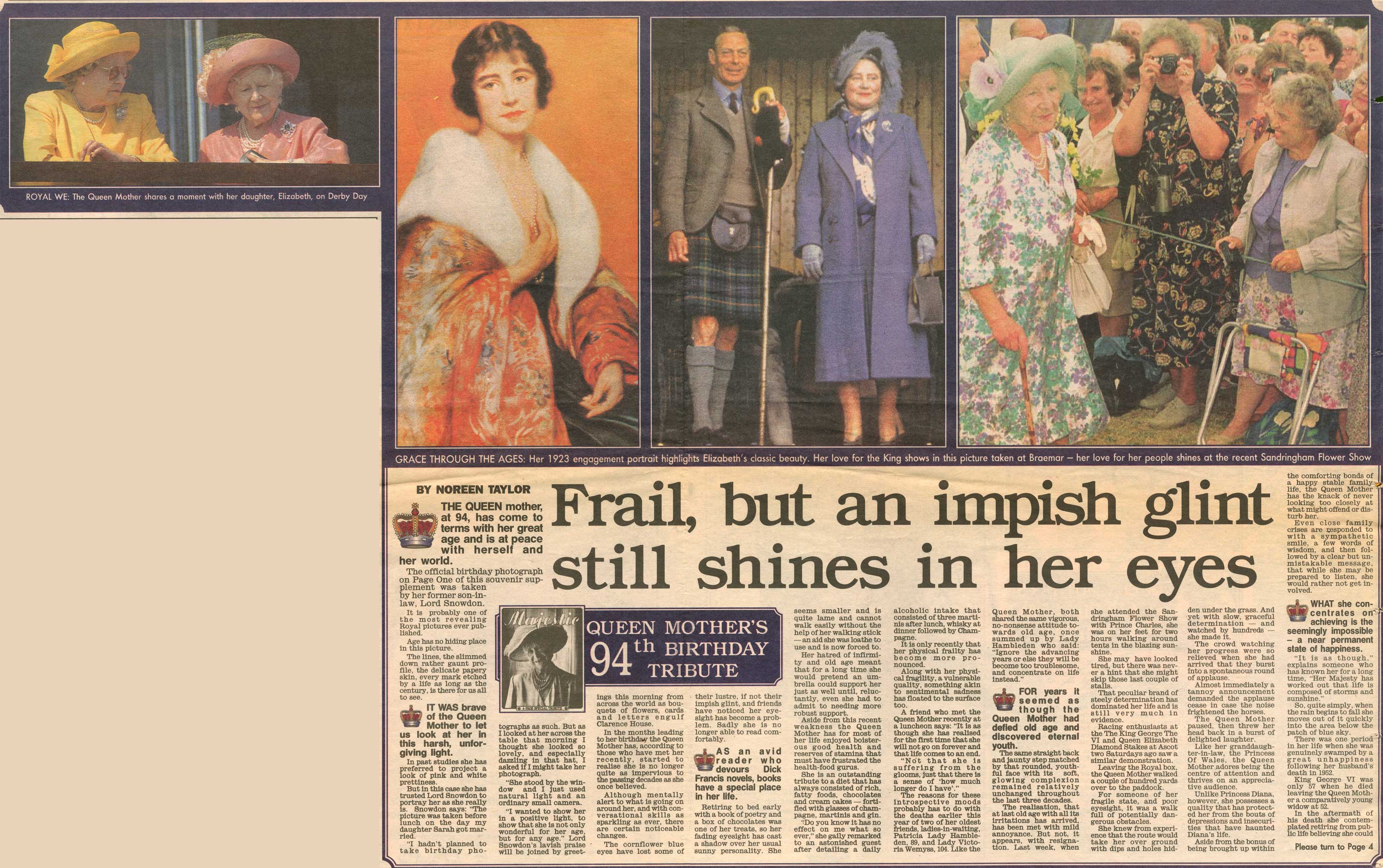 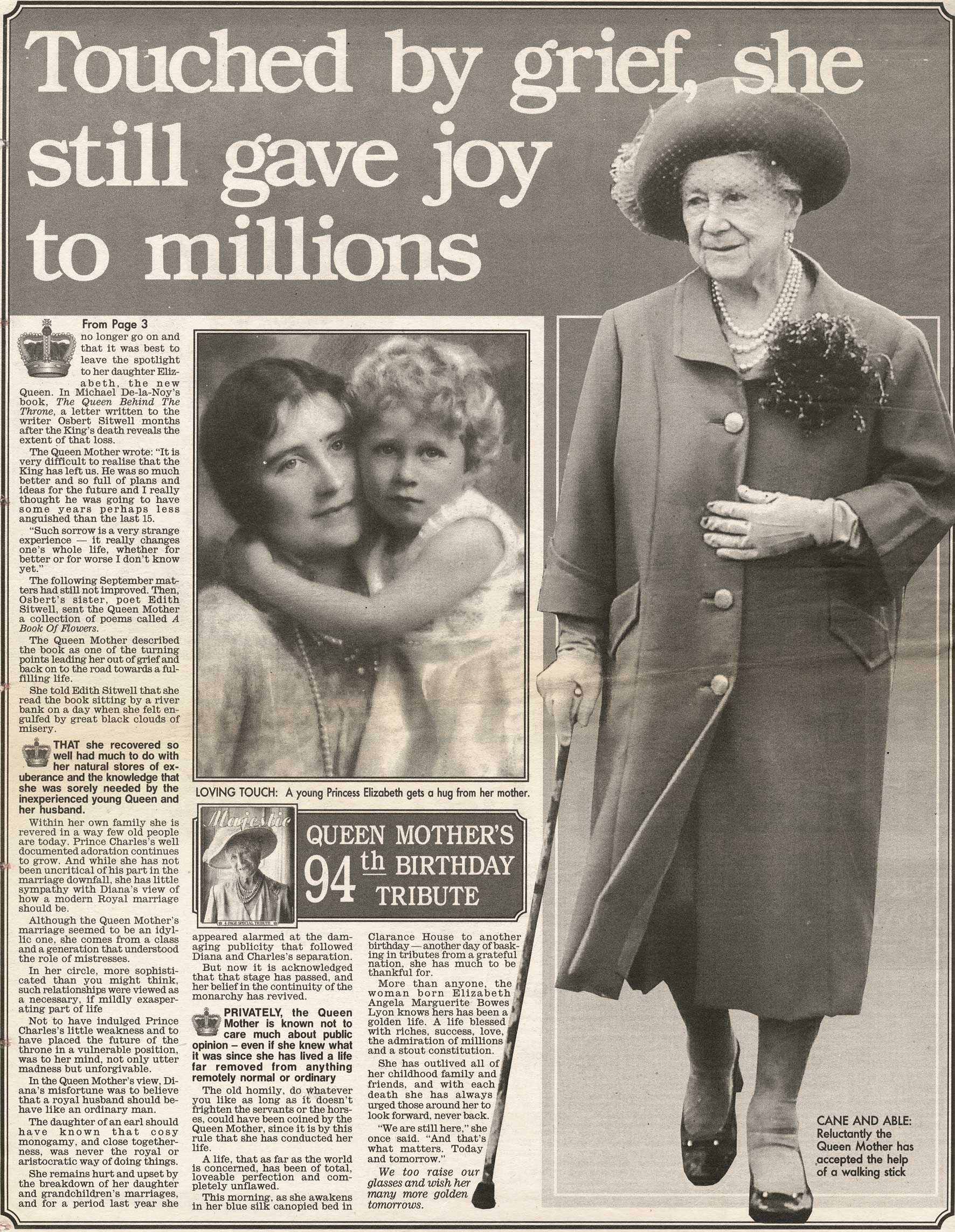