We forgive you – Gary Cooper’s daughter 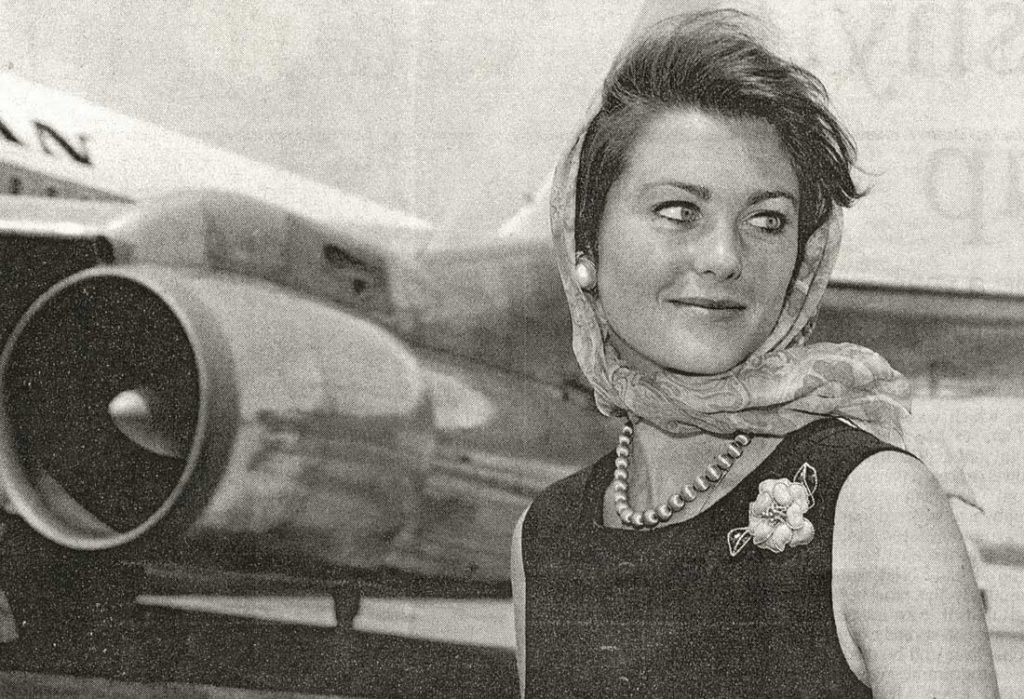 Gary Cooper was arguably the most beautiful man ever to walk across a cinema screen. The embodiment of Hollywood in its heyday, “Coop” was envied by men, adored by women, admired by fellow actors and celebrated by those with even greater fame.

The Pope, Picasso and the Queen, among many others, asked to meet him. Tall, graceful, monosyllabic, Cooper rode the waves of stardom with an ease and modesty which only added to his potent allure. Under the heat of Coop’s steady, blue-eyed gaze a legion of actresses melted.

Regardless of the publicity hype which presented his marriage as one of Hollywood’s most invincible, numerous stars lost their hearts to the double Oscar-winner. Among them were Ingrid Bergman, during For Whom the Bell Tolls; Audrey Hepburn, his co-star in Love in the Afternoon; and Grace Kelly while filming High Noon.

Patricia Neal, the most enduring of Coop’s conquests, admitted in her biography that she never recovered from their affair which began when they made The Fountainhead. Yet, until his early death in 1961 when he was 60, Coop remained happily married to Rocky, the well-bred socialite who first spotted him in New York’s smart 21 Club when still a teenager, swearing: “That’s the man I’m going to marry.”

Her marriage to the much lusted-after film idol made her vulnerable to attacks of jealousy, though she survived by turning the trick of looking the other way into an art form. That he never divorced her, even though he was undoubtedly in love with Neal, was partly due to another young woman, one he prized above all others, his doted-upon only child, Maria.

She is tall, lean-framed like her father, and with his blue eyes.  It seems incredible that the woman I meet at the door of her elegant Park Avenue apartment is 61 years old. The firm, square jawline, framed by a thick mane of hair, could belong to someone in their forties. Maria Cooper Janis, as she is now known, is dressed in serviceable black trousers, worn sweater, tweed jacket: clothes that make no statement other than the ultimate one – “I don’t have to care about that stuff.”

Unused to being interviewed, she appears tense. Indeed, the only reason she has agreed to do so is because of her affectionate book about her father. It opens with a foreword by Tom Hanks, who argues that Cooper’s performance in High Noonis one of the greatest ever filmed, before Maria tells lovingly of life with the man she called Poppa.

The photographs, many from the private family album, offer a glimpse into a vanished world of stylish grown-ups, where bare shoulders, black tie andcigarettes were derigueur at supper parties, where Clark Gable encouraged Tony Curtis to perform the latest dance steps, while James Stewart applauded a new singer called Sammy Davis Jr.

Married to the concert pianist, Byron Janis, Maria has eschewed the spotlight whichbathed her parents, having made a career as a painter.

“Christina was one of my best friends as a child,” she says. “She came in for a lot of criticism for that book, but I don’t blame her. I remember turning up at her brother’s birthday party to be told by Joan Crawford she had been sent upstairs as a punishment. When I went up to her room, there was Christina on her hands and knees over a huge steaming basin of water, scrubbing floorboards.”

Sinking into a chintzy sofa, Maria says: “My parents were extremely grounded in their values.” Photographs in her book prove that point, revealing a life of domestic idyll. Golden years of shared companionship with devoted parents whom she accompanied everywhere: fishing trips with Ernest Hemingway; hunting and weekends in the western wilds; scuba-diving in various European resorts.

“You might find this difficult to believe,” she says, “but my father wasn’t caught up in the Hollywood world in an egotistical way. He treated stardom like a job, one he carried inside himself. He never talked of work at home, so it didn’t leak into family life. He might have been an idol, but not to me.

“I didn’t know any other life. Most of father’s friends, Jimmy Stewart and Henry Fonda and so on, were in the same business. They popped in for tennis and family barbecues. He had his mystique, certainly, since he was of a class and generation of men who didn’t reveal emotions or explain innermost thoughts.”

Her husband claims Maria is similar to her father. “For a long time, she responded to questions in the same monosyllabic manner,” he says.  “Not quite ‘yep’ and ‘nope’, but pretty close. She’s better now, though.”

Maria says Coop, born of English parents in Montana, came from “a serious background.” His father was the state’s Supreme Court judge and hoped his son would become a lawyer. “My mother came from similar people. She had no interest in acting, preferring to share my father’s pastimes. Whatever he enjoyed, she took up. Her attitude was one of – ‘This is my guy, my man, so this is what I’ll share with him.’

They deeply loved and admired each other.”

Yet, it is impossible to avoid the subject of the other woman in his life, Patricia Neal, who even aborted Cooper’s baby when he refused to divorce Rocky and marry her. Given Maria’s sensitive nature, it is awkward to mention Neal, especially when – according to Neal’s account – Maria was “a little tearstained child who spat on the ground with so much hatred when she saw me.”

But long after Coop’s death, and after Neal’s marriage to Roald Dahl had ended, Maria and Rocky wrote to invite her to dinner, to say they forgave and understood.

Maria explains: “My mother married my father when she was 18 and he was 30, famous, and an active bachelor. She knew what she was taking on by marrying him – practically every woman in the world – but she was strong, confident.

“I was about 11 when the affair with Patricia began and I remember my mother’s dignity and wisdom in the way she handled everything. My father left home for six years: ‘the walk alone’, as he called it.”

Throughout this time, they met constantly and took vacations together, so family life wouldn’t suffer. “I don’t remember either of them saying anything bad about each other, nor do I remember him explaining anything to me other than to mention something about needing his own space.

“Mother told me he had fallen in love with someone else but allowed me to believe it would run its course. Instead of becoming bitter, or hitting the bottle, she forced herself to go out and find a life, made herself walk into rooms alone. She handled all of that. Father loved her guts and, in the end, decided home was the important place to be.”

After Coop’s death, Rocky and Maria moved to New York. Shortly afterwards Rocky remarried a surgeon, John Converse, and it was while travelling with them, on their honeymoon in the South of France, that Maria met her husband.

“It was love at first sight,” she recalls. “He was someone I recognised as being deeply familiar. You see, as a child, I’d encountered experiences people refer to as being paranormal. Byron had known similar experiences.”

Their marriage wasn’t blessed by Maria’s mother. Jealous of losing her beloved daughter, she refused to attend their wedding, sending a telegram: “It’s him or me.”

Reconciliation followed and Rocky, now a frail 86, lives close by. Why though did Maria wait so long to write a tribute to her father?

“Yes, it’s been too long. But I did it, before he’s forgotten by this generation. He was so special, so beautiful. I just couldn’t bear to let that happen.” 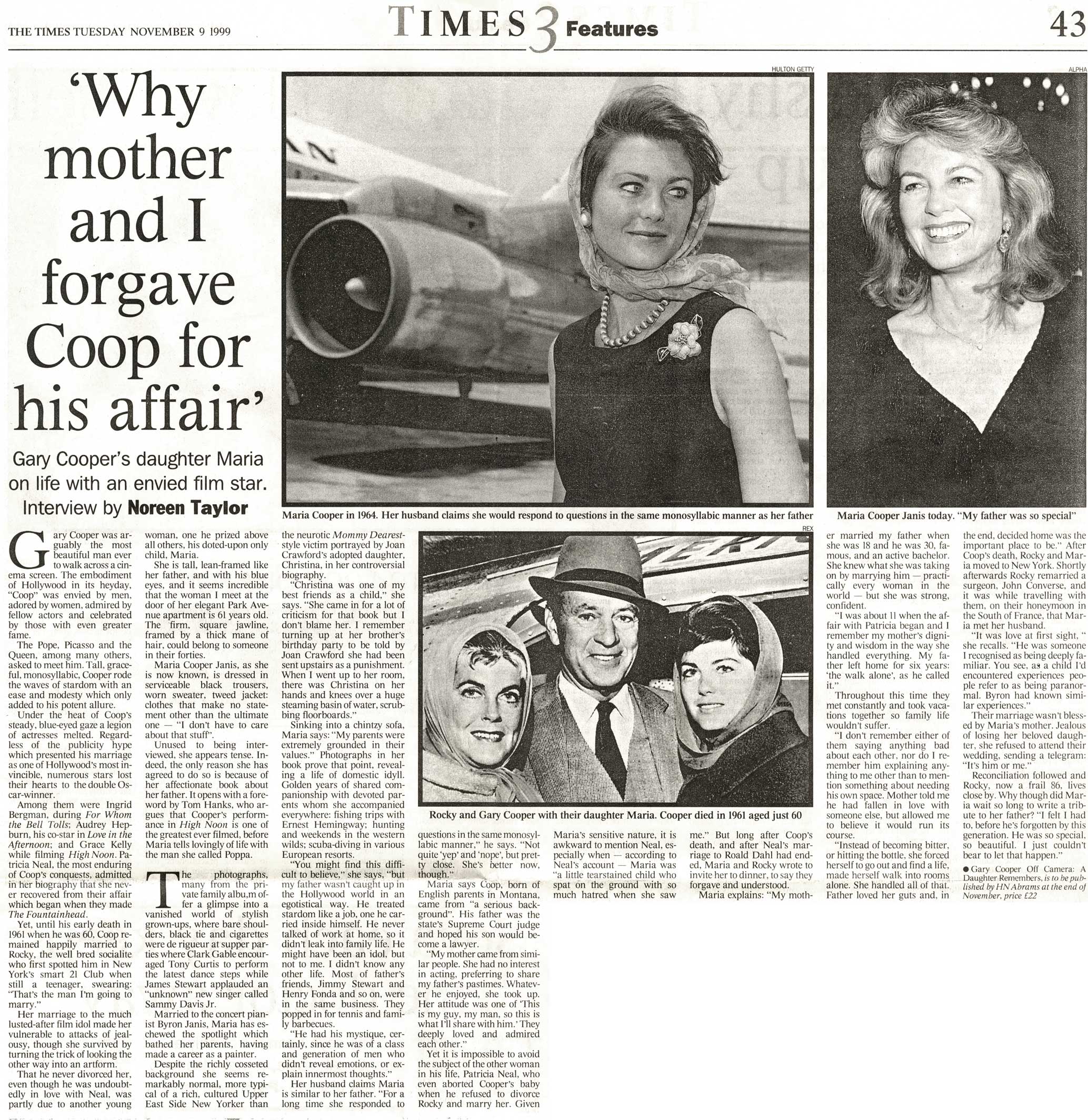