what’s next for Lord and Lady Rees Mogg 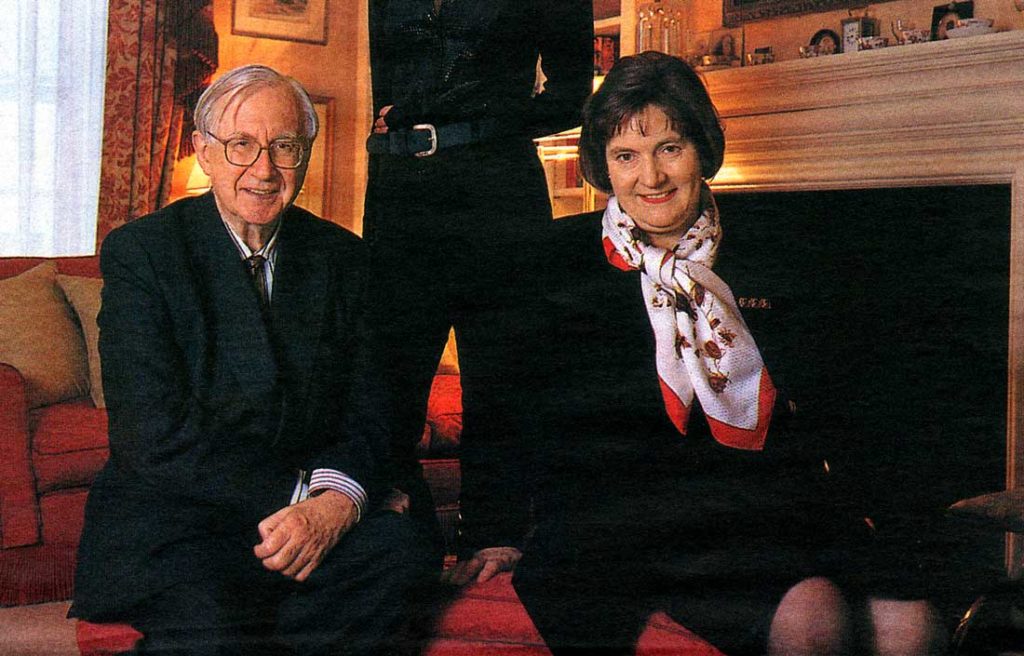 The late afternoon sun dapples Oriental carpets scattered across ancient flagstones. Above are beamed ceilings. In the centre is an inglenook fireplace. Through the door is a glimpse of velvety fields and rolling hills dominated by a score of mature English oaks. In this 15th-century mill house it’s difficult to believe we are really in England in 1998.

This nostalgic reverie isn’t at all disturbed by the owners, Lord and Lady Rees-Mogg. In spite of their continuing engagement in the modem world when in London, here in picture-postcard Shire England, they embody the spirit of times long past. He appears to be the rather unworldly learned gent, happiest among his books, composing essays. She is the lady bountiful wife; kindly, sociable and practical, exuding good manners and bent on good works.

As Lady Rees-Mogg carries in a tray, it’s impossible not to think of Rupert Brooke’s evocation of an idyllic Edwardian England. Will there be honey for tea? But this daydream of a world of continuity, where houses remain in family hands for generations and possessions are passed on father to son down the centuries, is broken once we talk.

For the Rees-Moggs have never been attached enough to any house — no matter how grand, no matter how apparently perfect — to stay for very long. Now they are even selling off a vast array of their furniture, paintings and objets d’art. Three hundred items are to be auctioned by Sotheby’s in Bath on October 29.

The glossy pages of the Sotheby’s brochure detail scores of classic pieces: mahogany tables, walnut chairs, rugs, bronzed plaster busts, paintings and prints. How could they bear to part with the exquisite George III grandfather clock? “We have another two,” says Gillian, Lady Rees-Mogg.

Then there are the centuries-old mahogany bureaux, the George I table, the William and Mary side chair and the superb ebony-veneered jewel cabinet? “Yes,” she sighs. “We seem to have three of everything.”

The reason for the sale is straightforward enough. Two weeks ago Baron Rees-Mogg of Hinton Blewitt in the county of Avon moved from the Old Rectory, with its eight bedrooms and four bathrooms, to a smaller country house. There just isn’t room for everything he and his wife have collected over the years. Gazing down at his beribboned black pumps, Rees-Mogg seemed doubtful they would be attending the sale.

Too painful? “No, not really. The furniture was largely collected for one of our previous houses, Ston Easton Park, a Palladian house.” Like the 10ft tall rare ebony and giltwood four-poster bed once owned by the Spencer-Churchill family? “Precisely. Twenty rooms in Ston Easton. Identical to The White House. Much more attractive, though.”

“Not that the same goings-on took place in our house,” adds Gillian with a jolly laugh. They are a wonderful double act, each correcting or amplifying the remarks of the other. He explains: “We’ve moved nine times in 36 years.”

As she pours tea into beautiful old Spode cups, she says: “Oh dear! Sounds like we haven’t stayed anywhere for longer than four years.”

Waving away proffered chocolate cake, he says: “That’s on average, of course.”

The Rees-Moggs are collectors par excellence: country houses, town houses, books, 18th-century furniture, silver, pictures, mezzotints. If you didn’t know of their busy metropolitan roles, you’d wonder if their entire lives had been spent bidding at auctions or rummaging through antique shops. So many riches for a journalist, even for a man who edited The Timesfor 14 years until 1981 and who remains a highly paid columnist, but then the Rees-Moggs are practically squirearchy.

Gillian, whose middle name is Shakespeare, is descended from the Bard while William’s family are old Somerset people who have been manor house dwellers for centuries. From the same class, yet temperamental opposites, their 36-year-old marriage is a study in contrasts.

She appears buxom, bouncy and accessible compared to his thin, thoughtful, socially shy persona. She drives, he doesn’t. She’s the practical one, the organiser of their many moves who carefully labels every box. “Typical husband,” she says cheerfully. “Disappears to write his Times column and reminds me to call out if I need him.”

They met when both worked on the Sunday Times. He was the 33-year-old City editor and she his 22-year-old secretary. “My friends thought him rather serious for me, but I loved journalists, loved the company of intellectual men with inquiring minds. He was ambitious, but he never made a list of goals like Michael Heseltine did.”

If she loved journalists, why did she leave the paper? Had she thought of becoming one? “Very, very good question. But in those days one had a job until marriage, rather than a career. Terrible I know, but that’s how it was then. I left the paper because the children began arriving very soon after we married, not that I stopped working. I became deeply involved in the voluntary sector. Lots of committee work.”

With just a hint of crossness, she adds: “I started a scheme to help lone parents long before Mr Blair’s new deal. You see, I hated school and was what you might call a late developer. I got my degree in social policy from the LSE when I was in my 50s. William has given me confidence, always insisted I could do things.”

Since last May, Gillian has been a Tory councillor in Westminster and sits on the committee which oversees eight secondary and 41 primary schools. “I’m in charge of appointing governors, so if anyone wishes to be one they should get in touch with me.”

She is also on the committee which grants licences to restaurants, stall-holders and — hoots of laughter — “dare I say it, sex shops”.

There are other interests, too, such as fundraising for the English National Opera and sitting on a housing benefit trust. Where had she found the time to buy so much furniture? “Oh, William’s been collecting since he was 14.”

Her husband breaks in: “I began collecting books when I was 11.” She acknowledges his interruption with a smile and he continues: “When we began  buying furniture in the Sixties there wasn’t a great deal of price difference between, let’s say, a rather good reproduction piece from Harrods and a George III chest. Our friends, who were buying from Heals and Habitat and painting everything white, were rather baffled by our tastes.”

In that era of psychedelia, with Biba’s purple velvet and Conran’s minimalism, Georgiana wasn’t exactly cutting edge. But fogeyish furniture increases in value while the fashionable buy tends to end up in a skip. Who bids thousands for Habitat bean bags?

“We didn’t go in for yachts or expensive holidays,” he says: “We bought pictures, books and furniture. I never bought a piece without consulting my wife. After all, she has to live with it too.” When her husband leaves the room to answer the telephone, Gillian confides: “We never have rows. In fact, the other day he told me he doesn’t sleep well when I’m not around. Rather sweet, don’t you think?”

Their five children — Emma, Charlotte, Thomas, Jacob and Annunziata — were brought up in a household so intellectually rigorous, that the youngest daughter once complained: “I’m fed up with this family. Why don’t you set a place at table for the Oxford Dictionary ofQuotations?”

The children were educated at home, by a governess, until they were seven. “William’s week began on a Tuesday, so returning from the country was complicated. But it worked very rather well. When they went to school at seven they were ahead of their contemporaries.”

William recalls: “Charlotte had a very nice Greek hand. She learned to read and write English when she was five, so it seemed a pity not to introduce her to other languages.”

“Lord Asquith taught Charlotte Greek,’ smiles Gillian proudly. “In those days I kept a menu book, recording every breakfast, lunch, dinner and AOP, for Any Old Pudding. Fascinating now: liver, heart, kidneys; amazing the amount of offal we once ate.”

So what has become of the children practically breast-fed on academia? Jacob, who made news as a child prodigy playing the stock market, is now a fund manager with Kleinwort Benson. Emma has married a carpenter. Gillian says: “Their friends call them Jesus and Mary because she’s so good. She’s become a Quaker, because she felt she needed a faith less formalised than her father’s Catholicism.

“Charlotte’s involved in publishing. Tom is the Conservative whip on Somerset council, and Annunziata, who’s only 19, can’t quite decide.’ “I think she might make a rather good journalist,” says William hopefully.

One of the major reasons for their move was to ensure that they are within a ten-mile radius of their married children. But it is a weekends-only house. Gillian explains: “It’s so essential to retain a London life. The country is for sewing and sociability. People pop in and I cook, endlessly.

“I’m not sure whether you could call it entertaining: ten for lunch where one gets used to knocking up whatever’s around. And we’re very fortunate in having our old nanny with us.’ But their children are adults with their own children, so who does she look after? She laughs: “Me, of course.” 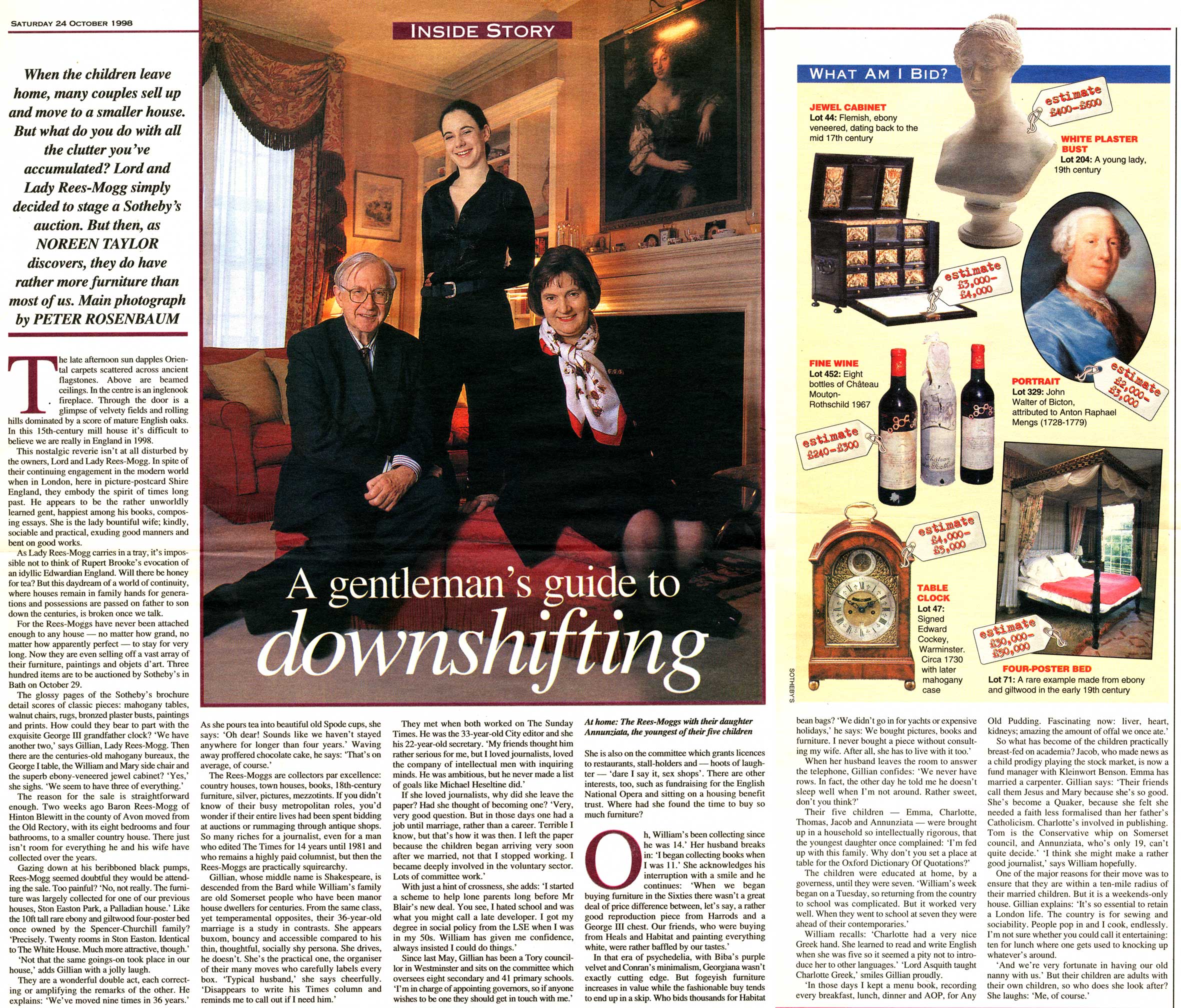