When I was Mia Farrow’s nanny 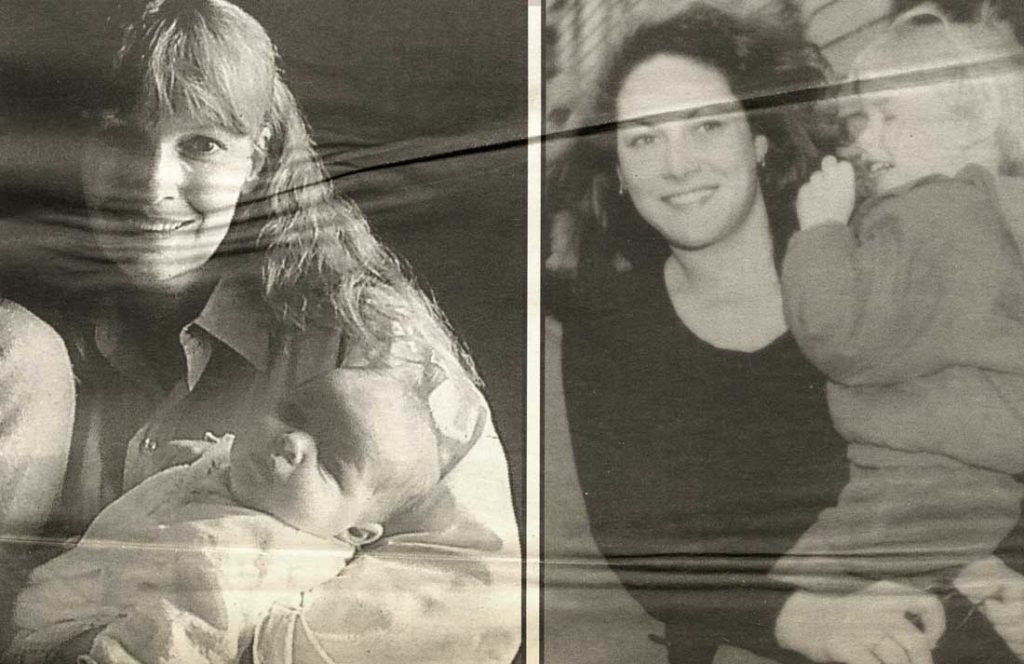 Whatever Kristi Groteke expected when she accepted a summer job as mother’s help to movie star Mia Farrow, it wasn’t this. There she was on Mia Farrow’s bedroom floor, trying to calm the actress’s near hysterical state.

“Oh. Kristi.” wept Mia over and over again, “life is so hard. It’s so hard you’ll never know.” How could anyone have known that the sunny household Kristi had joined in 1991 would descend into an emotional hell, scarring Mia and her eleven children for ever more?

Mia Farrow and Woody Allen, one of the cinema’s most feted couples, were what social workers would have called a dysfunctional family – whose screaming accusations of child abuse would rent the air.

Kristi, 24, has written an account of her two years with the family with Mia’s blessing. She has told of how neurotic comic genius Allen could never commit himself to Mia, insisting always on his

own separate apartment, and of how Mia believed he had sexually molested their eight-year-old adopted daughter Dylan.

Although a court cleared him of the charge, child experts have described Allen’s behaviour towards the little girl as “grossly inappropriate”. Kristi’s book,Woody And Mia, is not an objective account of what transpired between the couple during Kristi’s time with them. But then, how could it be?

Kristi was the one who had to listen to Mia’s night-long cries of heartbreak over Woody. She was the one who heard Mia weeping on the telephone, pleading with Soon-Yi, the daughter who had betrayed her, to leave Allen and return home.

Perhaps more than anyone outside the family, Kristi was the main witness to the events that began to unfold after Mia found nude photographs of her adopted Korean daughter on the mantelpiece in Allen’s Manhattan apartment. The pictures, taken by Allen, were crudely provocative, showing Soon-Yi, then 21, sprawled naked, her legs apart.

“No one deserves that kind of hurt,’” says Kristi, “especially a warm, generous person like Mia.” Kristi, who has now left Mia’s employ and lives with her parents in Connecticut, says: “I first met Mia through friends of my parents when I was at college in New York and looking for a summer job.

“Mia already had a nanny, but she needed extra help with the five younger children. She’d heard that I was interested in athletics and swimming, and since her country house in Bridgewater was about a mile and a half from ours, I guess we suited each other.

“When I first met them,” remembers Kristi, “Woody and Mia seemed like any other normal couple who had been together for 12 years. Comfortable together, rather than romantic. They were not, in any way, like you imagine celebrity couples to be.

“Mia’s New York apartment and her country house were cosy places, filled with children’s toys. She never worried too much about tidiness.

The children were her main priority. When I first started, I used to try tidying up after the family, but Mia would always say, ‘I don’t need you for that Kristi, come outside and help me with the children.’

“You would never have known she was a film star. She lived in jeans and T-shirts, shorts in the summer. She never wore makeup or bothered about her appearance. She treated me like an equal and didn’t talk down to me. When my boyfriend was killed in an accident, no one could have been warmer or more supportive than Mia.

“Woody was different. Distant, kind of untouchable. And no, he didn’t crack jokes or make me laugh. In fact. I can’t remember him uttering any of the dry one-liners he writes for his films. I don’t know if it was through the pressure of his lifestyle, but he walked around with a very unhappy face.”

Strangely enough, for a woman who placed so much value on family closeness, Mia had very little support from her own brothers and sisters. Indeed, her mother, actress Maureen O’Sullivan, rarely visited, choosing instead to offer support via the telephone.

“Maybe it was because she didn’t have that family closeness that she had to build her own,” suggests Kristi. “She had few visitors, preferring to be on her own with the children. When she and Woody

were together they would eat out at night, but never far from the house, because of the children.

“Mia wouldn’t travel without them either. They always stayed

with her in a trailer when she was working in one of Woody’s films.

In fact, if you were around Mia, you’d be surprised at how ordinary

her lifestyle is. She could have been any ordinary, laid back

In some ways, Kristi is right. Except that housewives do not have wedding photographs of their first husband, who happened to be

Frank Sinatra, sitting around. Nor do they spend $600 a week on household bills. Nor do their young children have their own individual psychotherapists.

In the end, the picture Kristi paints of Mia is of a sad, depressed woman. She loved Woody Allen deeply and unconditionally, believing their union would last forever. In the end, he not only

deprived her of her daughter, but also chipped away through

the years at much of her self-confidence. He didn’t want to sleep with

her, and would tell Mia often, and in company, how dull she was, and

how he was the only director who would employ her.

“He treated everyone like crap,” Mia has since told Kristi. “He cared

only for himself.” So, what is Mia Farrow, film star and mother, left with? Grief, terrible memories, and legal fees close to £1million. Kristi revealed this was why she accepted $500,000 from Hellomagazine for an interview.

Woody Allen, meanwhile, still lives in an apartment facing hers

across Central Park, is still making films and at weekends can be seen

around Manhattan in his Mercedes limousine, with Soon-Yi by his side.

*Woody And Miais published on May 5 by Hodder & Stoughton 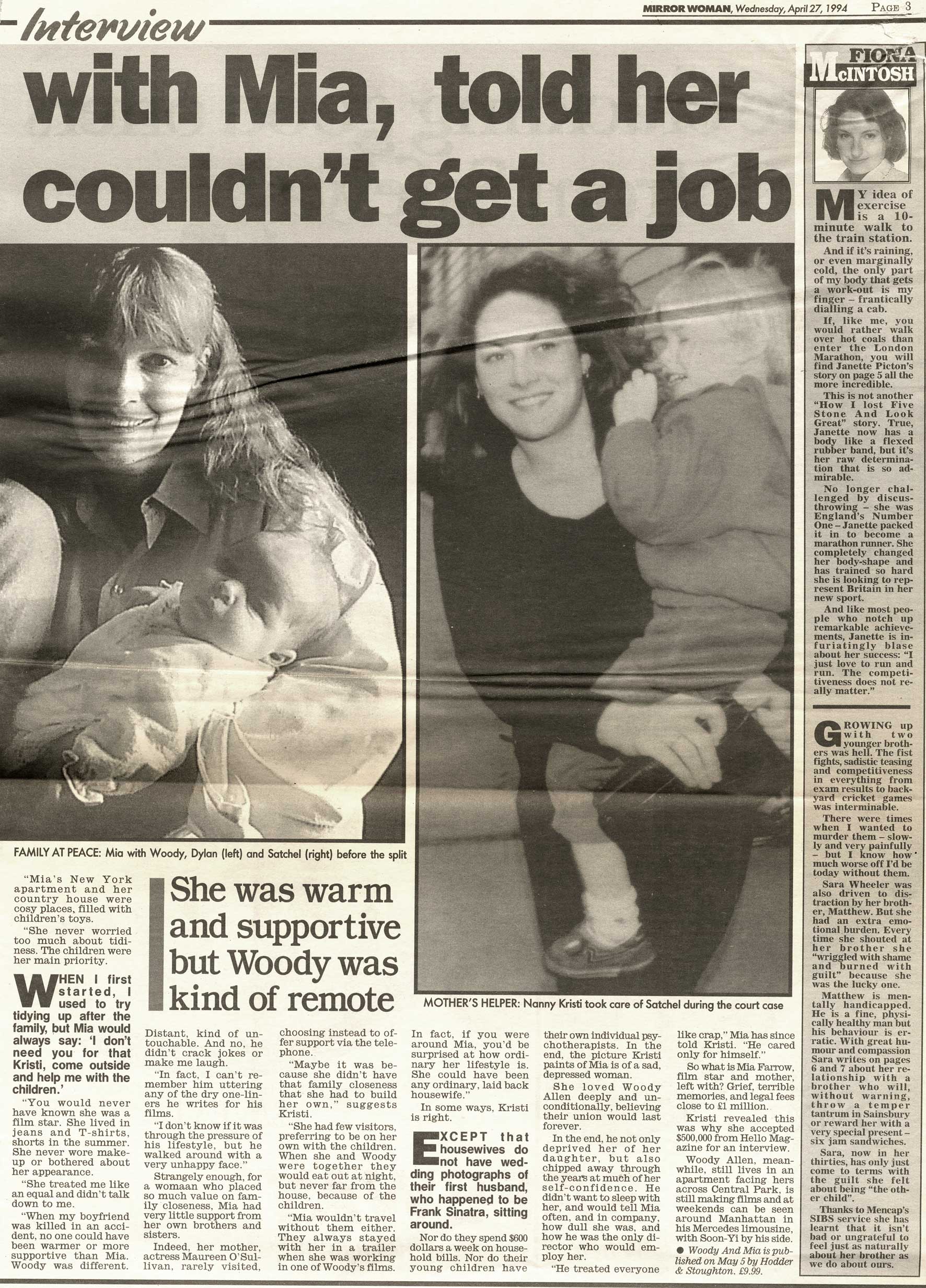