Why Paul McCartney went back on the road at 50

Paul McCartney always wanted people to like him. Even when he had the world at his feet and a shake of his head could provoke mass hysteria, he was patient and polite.

The angry tantrums and the acerbic one-liners, came from Lennon. Paul was just easy – as he is today. “Like some soup?” he offers, balancing a bowl of vegetable broth on his knees.

Backstage at London’s Docklands arena, where he is rehearsing for his latest world tour, there is no big-star fuss, and none of the anxieties associated with interviewing a celebrity of his calibre.

Already the tour looks like a sell-out. It will kick off in Australia and American and European dates will follow. Dates for UK venues will be announced later in the year. Two Australian gigs sold 16,000 tickets in under an hour. During his last American tour, all the giant stadiums surrounding New York were sold out months ahead.

“I never thought I’d still be performing at this age. I thought it would all come to end when I was 24,” he says. “I mean 40 was the living end but 50… I don’t feel that different inside. Although I try not to shake my head and look cute on stage anymore.”

He’s not as pretty as he once was. The face is harder, manlier and his hair is flecked with grey. Still, he’s a good-looking man, slim, muscular without any of the slack bulges usual in his age group. “I remember John saying I’d get better looking as I got older.”

The occasional references to Lennon remind you that so many of his contemporaries are either dead forgotten. Yet here’s Paul bubbling away, planning another tour, with a new album coming album coming out. And while all this is going on he knows that he has a fortune, once estimated at £380 million to keep him comfortable.

How come he survived? Why didn’t he succumb to the excesses that destroyed Brian Jones, Joplin, Hendrix, Jim Morrison and others? “I could have done so very easily,” he says. “Except that whenever I was tempted, I’d hear me dad’s voice warning me ‘now son, that’s not for you.’

“Years ago, I remember a guy telling me that heroin wasn’t addictive. Try it, he kept telling me. Only poor people have problems with heroin because they can’t afford the top grade… you’ll be all right. I could have been persuaded, but there was that voice again saying, ‘hey hang on a minute, son’.

“I was lucky to have that kind of traditional, Liverpool working class family.” He describes his dad as the sort of man who made him doff his school cap to old ladies at bus stops. His mother, a nurse, died when he was 14, leaving Paul and his younger brother Mike’s upbringing in the hands of his dad.

“John didn’t have a father around to teach him those values. I remember meeting him and Cynthia, his first wife, on holiday with their son Julian. I’d be running around, playing these daft games with Julian, and John would be sitting there, mystified. It breaks my heart to remember, but he didn’t know how to play with kids because no father had played with him. ‘You must tell me how to do that,’ he’d say.

“Ringo didn’t have a dad around either and he got into trouble, but he’s all right now. George had a dad, and he’s always been together. Being famous is as heady business. When it began there was a point where I could have retreated and decided this wasn’t for me.

“I could see what had happened to Monroe and James Dean, but what was the alternative? I could return to coil-winding at Massey & Coggins, go back to sitting on top of a freezing bus, reading the paper in the morning, when the idea of having a record  in the charts was as far removed from life as somewhere like Hollywood.

“I don’t think being famous changed me, although it certainly changed the attitude of everyone around me.” Paul McCartney has the same Liverpool accent, same off-beat humour and the set of values he would have had if fate had not kissed him with that special brand of musical genius.

He does not live like a rich man. He and Linda brought up four children in a two-bedroom house in Sussex, without nannies, or servants. Indeed, he talks proudly of how they all used to sleep in the same hotel room, while the baby slept in a drawer.

Paul rolls around laughing recalling how rock promoter Harvey Goldsmith came down to visit them in his Rolls Royce and kept his chauffeur driving up and down past the house swearing the McCartneys couldn’t possibly live somewhere so modest.

He agrees that the Beatles were flash were enough in their time. “Oh sure, I did the mansions, the Rollers the private jets. I tried all that and it didn’t make me happy. I’d hang out at the Playboy Club with people like Telly Savalas and watch them blow £2,000 on a roulette spin. I went to hunt balls, to ambassadorial dinners, and all I would feel at the end of the night was a sense of loneliness, emptiness.

His longing for a simpler, more cosy life has inevitable led to gossip about him being tight with money. Yet friends who know him testify to his generosity and his aid to causes he believes in such as Friends of the Earth. “I’ve been sensible about money because I wasn’t brought up with it. I wasn’t brought up like Michael Jackson, sending people out for beef burgers when I was 10.

“Like everyone, I fantasised how wonderful it would be to win the pools – £75.000 was the jackpot then. I thought I would be in heaven if I’d had enough for a guitar, a house and a car. When the money started coming in I thought you stuck it in a bank and got on with your life.

“But the accountants said: ‘Oh, no, you must invest it Paul’. I put it in things like a brush factory, a fleet of oil tankers or computers. I didn’t fancy any of it. Then they suggested a music publishing company, one that owned dad’s favourite song, Tenderly, and The Christmas Song, that they just used on Home Alone II. Stop there, I said. I’ll buy that.”

Later on, McCartney also bought the rights to his idol Buddy Holly’s songs. He says: “That’s the lovely part of having money. It allows you able to do something like buy your favourite songs. I don’t want to sound smug about cash when people are being thrown out of work.

“All I’m saying is, it doesn’t buy you a happy marriage or a relationship with your kids. There’s nothing to replace ordinary people, and working at something you love. I mean, if I didn’t work, what would I do after making the bed the morning… start panicking?” 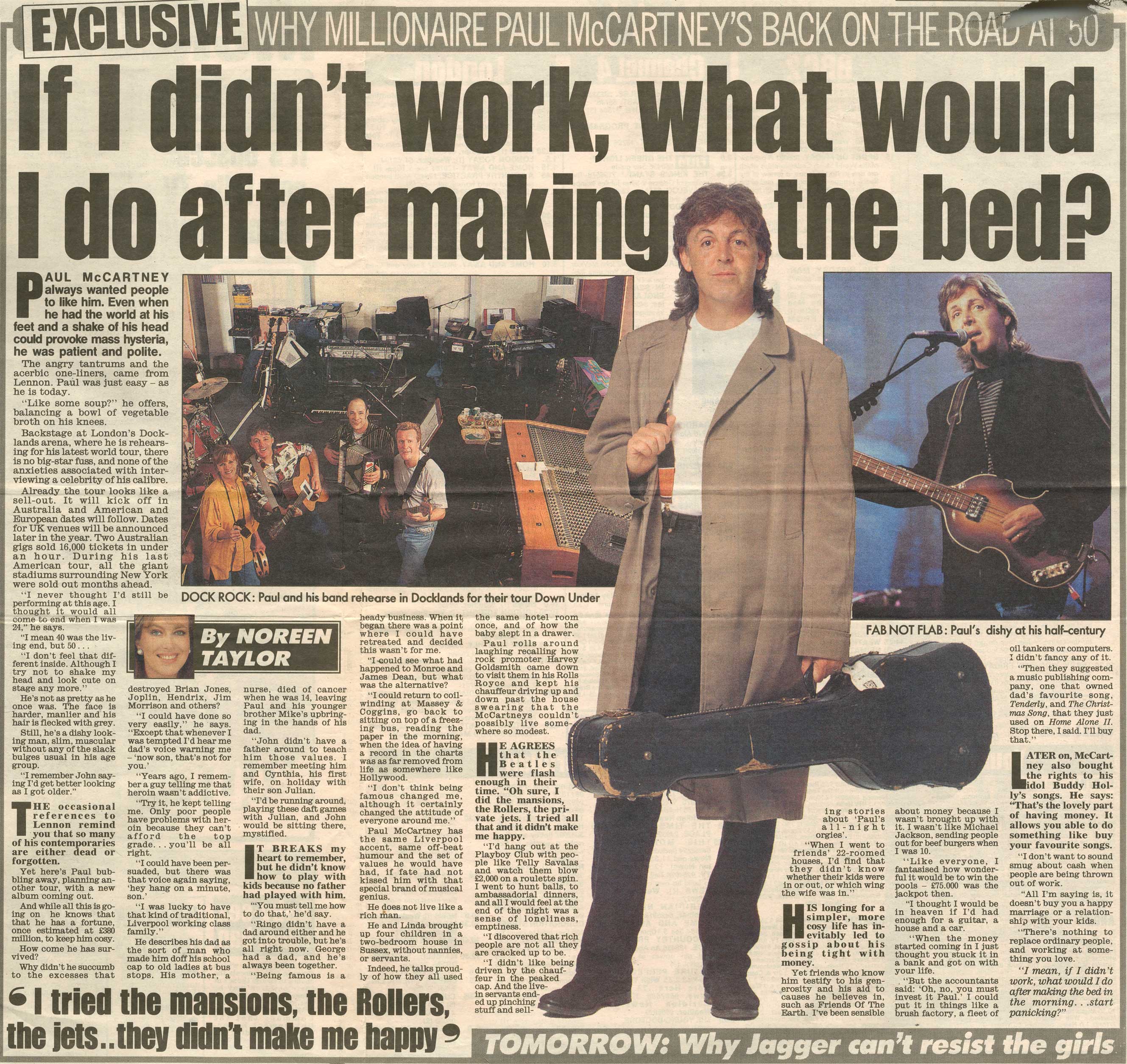