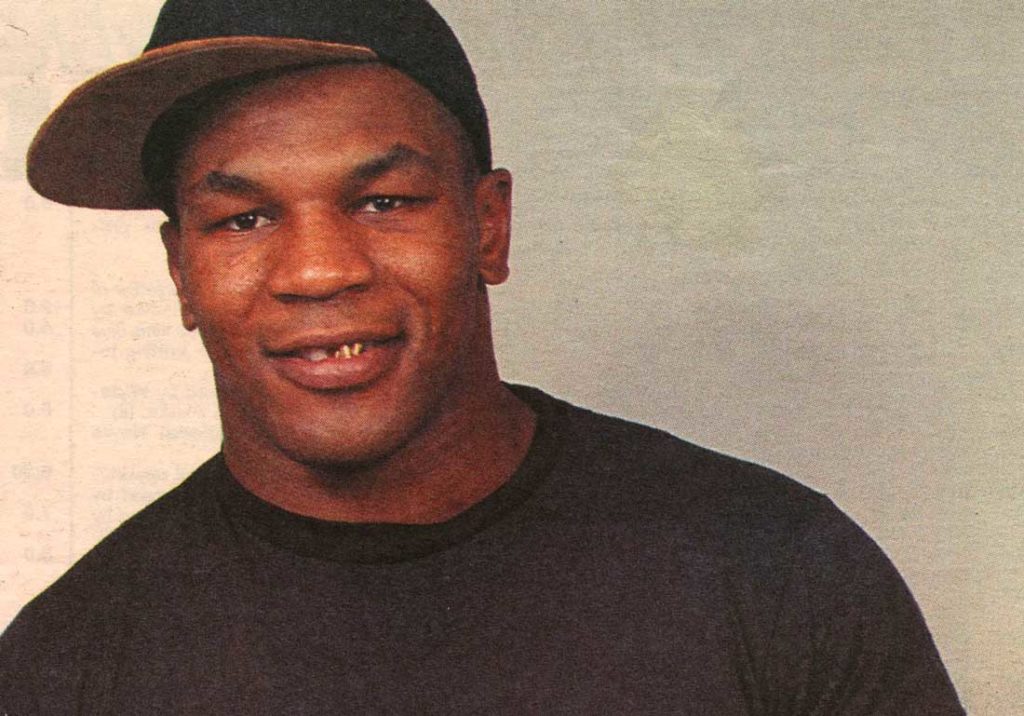 From inside the inside the gents changing room in the Gianni Versace boutique, floats a soft, lisping voice. “Yeah for me it’s Gianni every time. Armani… I never touch. Too straight. Not enough of those little touches, like the folds in front of the trousers. “Y’know what I’m saying, man?”

Standing outside the changing room, poised to catch the flurry of suits, shirts, sweaters, ties and shoes that come flying through the gap in the curtain are members of the Tyson entourage. Great, black, silent hulks who chant in unison: “Yeah Mike. Sure Mike.”

Eventually, the curtain parts to reveal, in all its golden gleaming muscular glory, the half-naked body of Mike Tyson. Mike is in Atlantic City, training for his December 8 fight with Alex Stewart, his first opponent since he lost the world heavyweight championship to Buster Douglas in Tokyo last February.

Atlantic City is boring, a slot machine resort for wrinklies So what else is a boy with $50 million in the bank to do between training bouts but shop? Just before we leave the boutique, Tyson lifts what looks like a drum of Versace cologne off the shelf and places it in my arms.

Back in the hotel suite – the sitting room is about as large and as personal as an airport lounge – Mike lies on the sofa hugging a cushion. The lynx-like eyes, two gold teeth, and the massive bull neck are strangely at odds with his soft coquettish voice, so soft you have to lean close to hear what he is  saying. 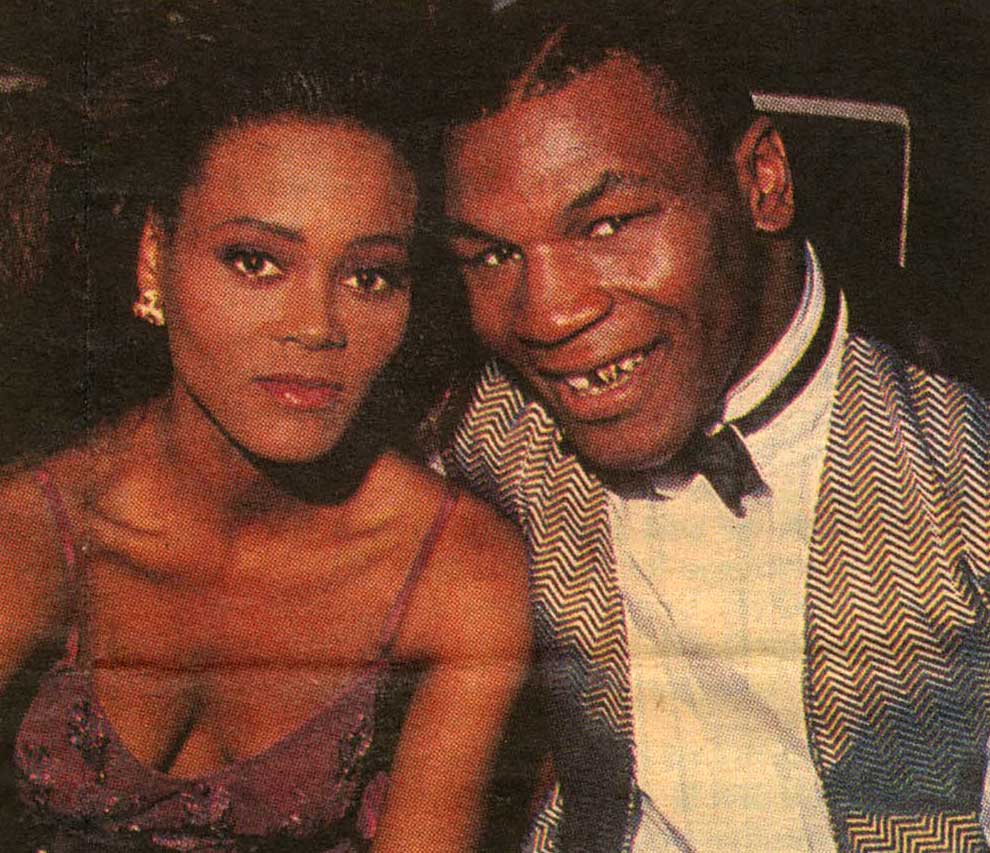 And what he’s saying is hugely enjoyable. We are like two girls gossiping in a powder room. For starters, girlfriends. We talk about Robin Givens, his ex-wife, Natalie Fears, the mother of his son, six-month-old D’Amato Kilrane Tyson, but most of all we talk about the world’s top black model the English girl, Naomi Campbell.

Mike is definitely hooked on Naomi. “She don’t want to make love to me anymore and we used to do that a lot,” he says sheepishly. “I don’t think she’s in love with me now, but I love her. I love all my women. One time she was phoning me every day and she would get so mad if she couldn’t get through. She’d be real jealous if she saw my picture in with another woman.

“Now, she just wants to hang out with me. Like we’re buddies. I really admire her. She is so classy, so rich, but y’know man, when we go shopping she buys everything and I mean everything and then she runs off and lets me pick up the tab.

“Is that a smart woman?” he asks himself, slapping a vast oak-size thigh. “She’s gonna be so mad with me when she reads this,” he chortles, rolling around hugging himself.

Does he only date black women? The question halts the giggling and another Tyson appears. An angry Tyson. “I love white women too. But, as long as white men are talking about niggers, I ain’t walking out with any white girl.

“I’ve got pride. I’ve got intellect and I’m plain sick of this black stereotype image that says we’re like a human juke-box, only good for singing, dancing and playing sport. Man, I can’t dance. I’m terrible. And I’m hopeless, hopeless when it comes to any kind of sport. I can’t do nothin’ except box. But I’m one clever pussycat.”

With Tyson’s lisp the word comes out as ‘puthycat’. On the subject of Robin Givens, that demented, self-destructive merry-go-round of a marriage that lasted eight months, the puthycat is less forth-coming.

“Oh man. What can I tell you? I was 20 years old. I was hanging out with people who a year later I wouldn’t drop shit on. I’m not saying I regret it. We had some fun times and she stills rings me. She rang me after I lost the Tokyo fight to see how I was. She’s doing OK. Not as OK, as when she was married to me.”

When Mike and Robin appeared on the Barbara Walters show, Robin claimed he was violent and could only be controlled by copious amounts of tranquilisers. On the show, watched by millions, he neither complained nor explained.

“I didn’t want to embarrass Robin, nor lose my dignity by arguing. That’s why I didn’t say anything to defend myself. Y’know what that experience taught me? Never get married, Mike. Never ever again.”

And what about Natalie Fears the mother of his son? Is that a special relationship? “It’ll get special when she starts acting special and she is not doing that right now. She is in Los Angeles with the baby making demands, giving me problems and not acting in a dignified manner.

“I did not plan on her getting pregnant. In fact, I was real unhappy when she told me. But once I saw him, I thought he was so cute.”

Asking him if he was there when the baby was born produces a reaction close to nausea. “Hey man, gimme a break. You expect me to stand and watch all that stuff? I might not want to make love to her again after watching that… and she’s a fine-looking woman.”

If his relationship with Natalie grows cooler, isn’t he afraid of losing access to the son he says he adores? “Always keep the woman dependent on you, that’s my secret,” he whispers conspiratorially from behind the cushion.

“She ain’t going nowhere. Believe me. She ain’t stupid,” he adds cynically. “My boy is going to have everything I never had. An education, a father, a home, yeah and a lot of money too.”

Would he have felt the same if the child had been a girl?

“No way,” comes the prompt reply. “I would not have been interested. Does that make me a bad guy?” he asks teasingly.

A bad guy, sure, but one with a touch of the puthycat. 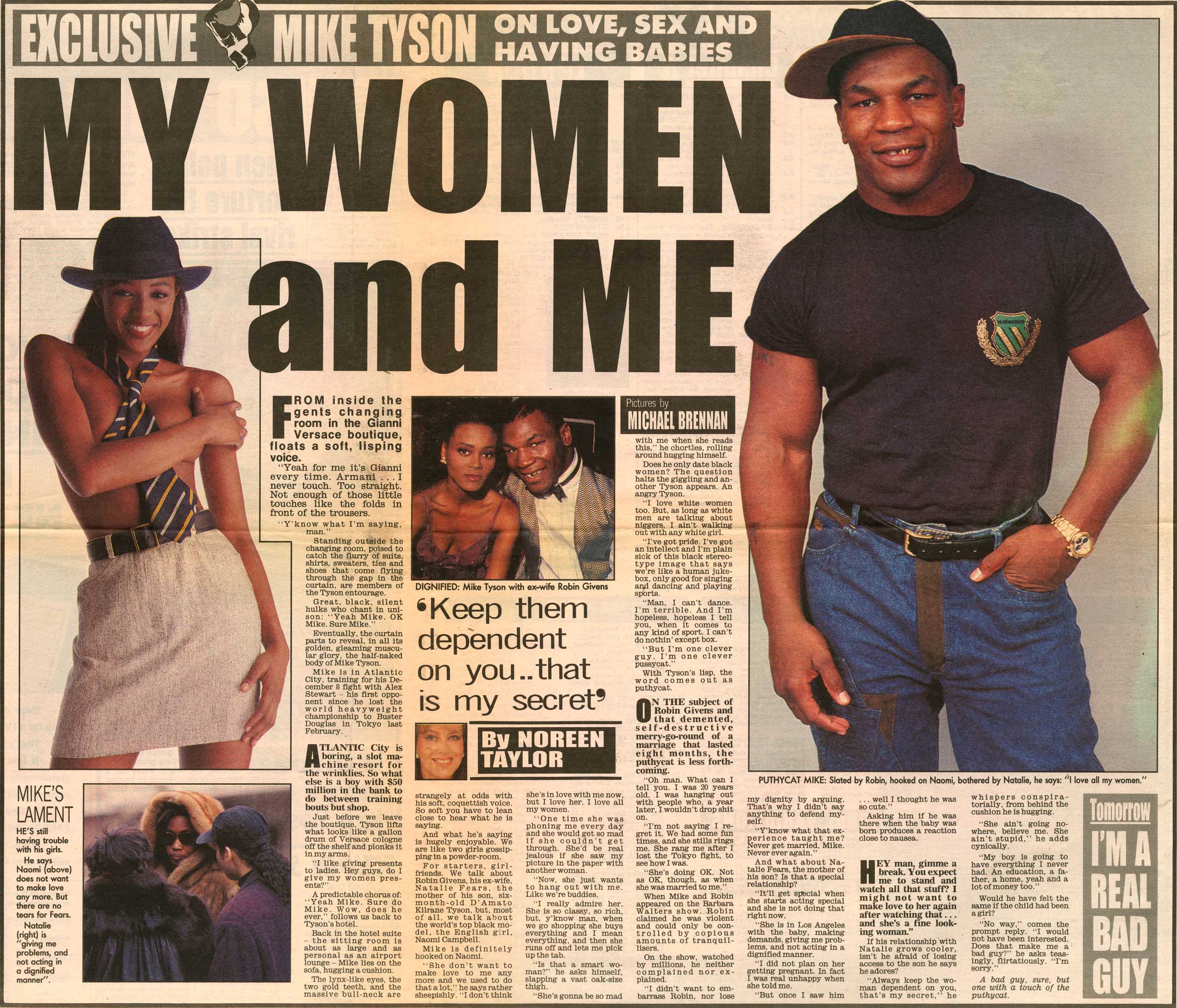