Woman on the verge — Marie Jones 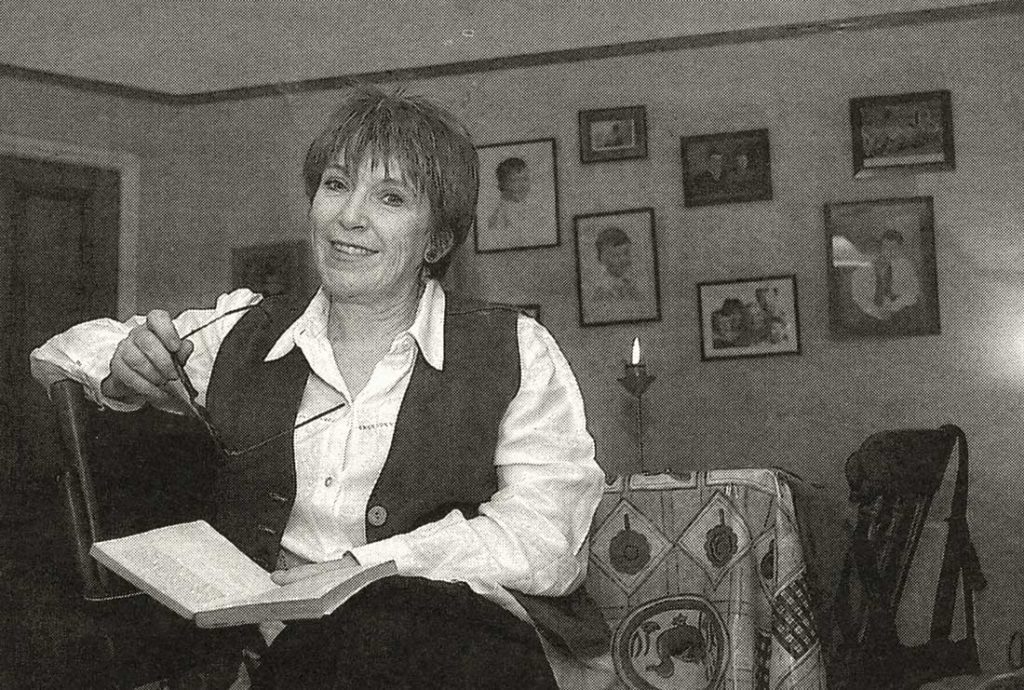 Marie Jones sits at her kitchen table in Belfast roaring with laughter as she tells how she and her husband have invited 80 friends and relatives to New York for the Broadway opening of her West End hit play, Stones in his Pockets.

“God, what a culture shock it will be for some of them who have never been out of the country before,” she says. “Like my brother, who doesn’t even have a passport. We are all going to Sardi’s afterwards, to wait for the reviews. It will be brilliant. I’m not worried about whether they like it or not.”

Sliding a bowl of soup into the microwave, Ian McElhinney, the play’s director as well as Jones’s husband, says: “If they don’t like it, it will be their loss.” Tiny, feisty Jones, 50, has every reason for her confidence. Her giant theatrical talent has already brought her international acclaim. Fresh, original works such as Women on the Verge of HRTand A Night inNovemberbecame hugely successful.

Last month Stones, set in an Irish village where a big-budget movie is being made, won an Olivier award. A film version is in the pipeline. All of this has established Jones as an important playwright. The signs of success are obvious. A calendar hanging next to the bread bin records the dates when a BBC team will arrive to film a documentary about her life. Offers of work pile up on the kitchen table. Actors, writers and film directors turn up to party in her kitchen.

Working-class Belfast women rarely manage to change their lives in such a radical fashion and stay true to their roots. Yet Jones has not rejected the world in which she grew up, choosing instead to explore and explain her tribal Protestant background, with all its strictures and taboos, through her work.

“You see, we lived in one of those communities in two-up and-two-down houses in streets where everyone knew everyone else’s business. I was odd because I was a kid who hung around when my mother went visiting. “Oh, here’s 20 questions coming,” they’d say.

“Women didn’t go to pubs then. They would gather in each other’s houses. Bottles of port or stout would be put down on the table, the fags would come out and the stories would start, the hopes, joys, fears.

“I’d hear them all and 1 loved it. And school, well, that was just a laugh. I was always in trouble and I came out with virtually no exams. Then one day a teacher had the idea that instead of putting me in detention, she’d send me to a drama group as punishment. F*** that, I thought, I’d rather have detention. But from the minute I walked into that room, I knew I’d arrived. They were doing The Boyfriendand I was given a part. Brilliant! People laughed at you and you didn’t get into trouble, you were applauded.”

Heady though this new theatrical adventure was, Jones did not think of leaving the world in which she’d grown up. “I still wanted to get out of the hovel, I wanted a family, so I got married at 18, had my son, Dan, lived in a nice semi-detached and joined in the coffee-morning set. But it wasn’t me.”

Escape came in the form of an advertisement to join a drama, group being formed by Belfast’s Lyric Theatre. “No one could understand what I wanted with a drama group, but it changed my life. Sitting around talking about Ibsen, Chekhov and the meaning of life with all these people who had been to university. Another world. Gradually it took over, my marriage broke up and I left my son with his father. Dan’s cool about that now but he does joke, ‘You abandoned me.’”

Acting jobs came in patches, a few Arts Council-funded plays that did the rounds of schools and old people’s homes. “The half-decent roles were always given to English actresses, not to normal-looking women who spoke as I did. About five of us who were really fed up with the situation went to the playwright Martin Lynch, the first working-class Catholic I’d ever met, and asked if he would write something for us. Something about real life, about the people around us and the events that shaped their lives.

“‘Write it yourself’, said Martin, ‘and I’ll help’. So we did. We wrote about a women’s strike that had taken place in the 1920s, toured the schools, the local halls and people queued up to get in. They loved it. We were talking about lives they understood. Don’t forget that at the same time a war was going on and a lot of people like me were beginning to question things. Growing up as a Protestant in Belfast made it hard to be a liberal.

“We had a real ignorance and fear about Catholics, considering them as people apart with a strange religion who had to be kept well away or they would take over.” As Jones learnt, being a socialist meant realising that you had much in common with other working-class people.

She says: “Our common enemy wasn’t the Catholic in the next street, but those in power who were using us as the foot soldiers in their own struggle.” The idea for Night in Novembercame after a football match between the Republic of Ireland and the Northern Ireland teams. The day after the match the Dublin papers were full of reports about sectarian songs and chants heard throughout the match, chants that we were so used to. I suppose we were brutalised into trivialising that whole business.”

Jones’s questioning of that hatred became an award-winning play that performed to packed houses from New York to Moscow, turning the woman who claims she cannot spell and is hopeless at grammar into a rich and feted playwright.

And stylish though their house in Belfast suburbia is, there is no evidence of extravagance. “Ah, wait now, I did do something extravagant,” Jones says, casting around for examples of spendthrift behaviour. “I took a girlfriend to Australia for the weekend. First class. We could only go for the weekend because she had to get back to work on the Monday. But at least we got two didgeridoo.” 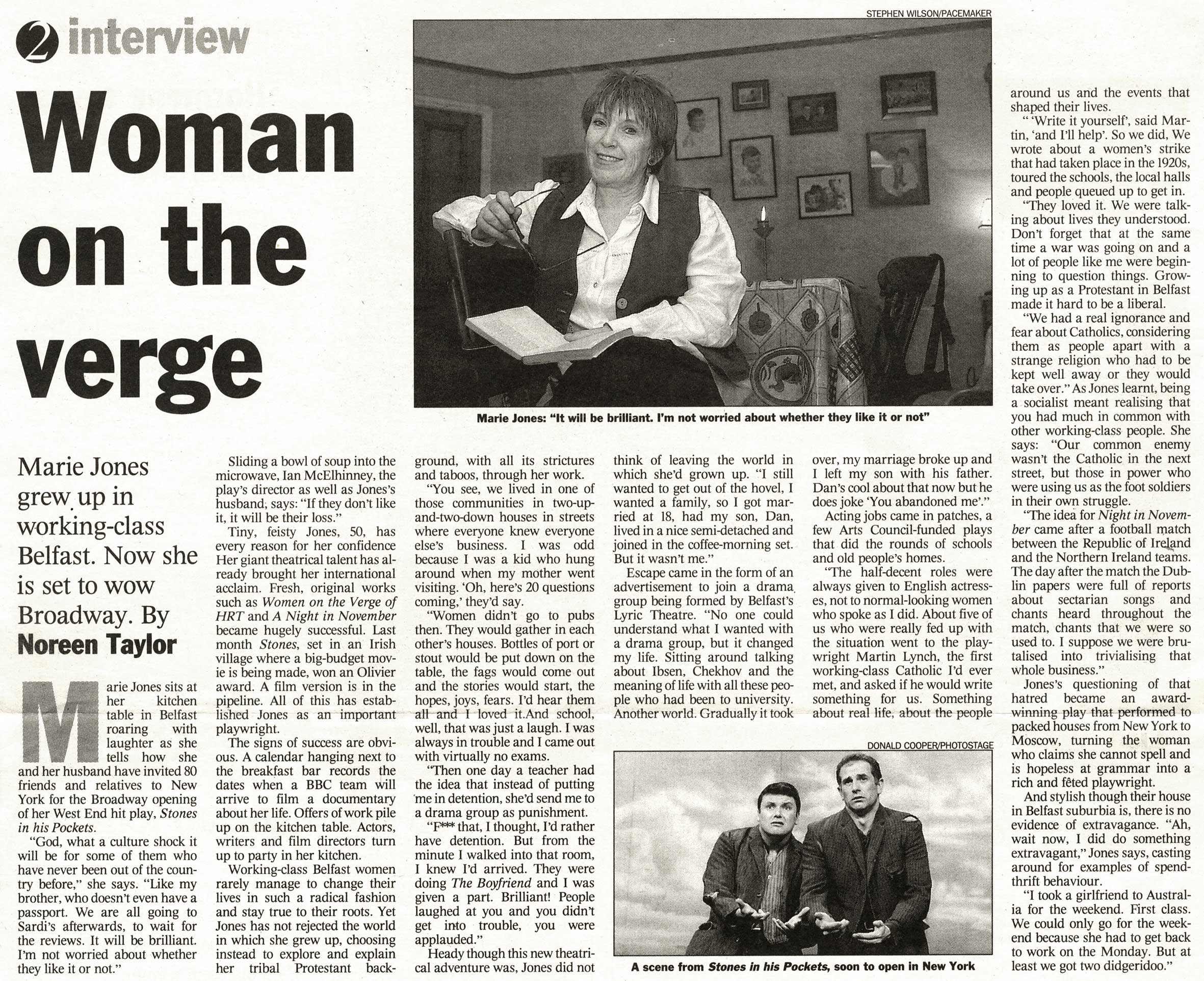